The Most Disturbing Fishing Trend on Social Media

The rise of the Facebook fishing group has made way for some fascinating online interactions. From anglers throwing their honey hole coordinates at complete strangers to angry discussions of the propriety of drinking beer adjacent to children while ice fishing, there’s certainly a lot of entertainment value—not to mention some free fishing knowledge.

While most groups I monitor are very welcoming to novice anglers, and some members share information I might not give up with a gun to my head, we’ve noticed a disturbing trend in which people post a photo of dead fish on the bank and ask what it is.

“Anyone know what this thing is???” said another caption we saw awhile back. 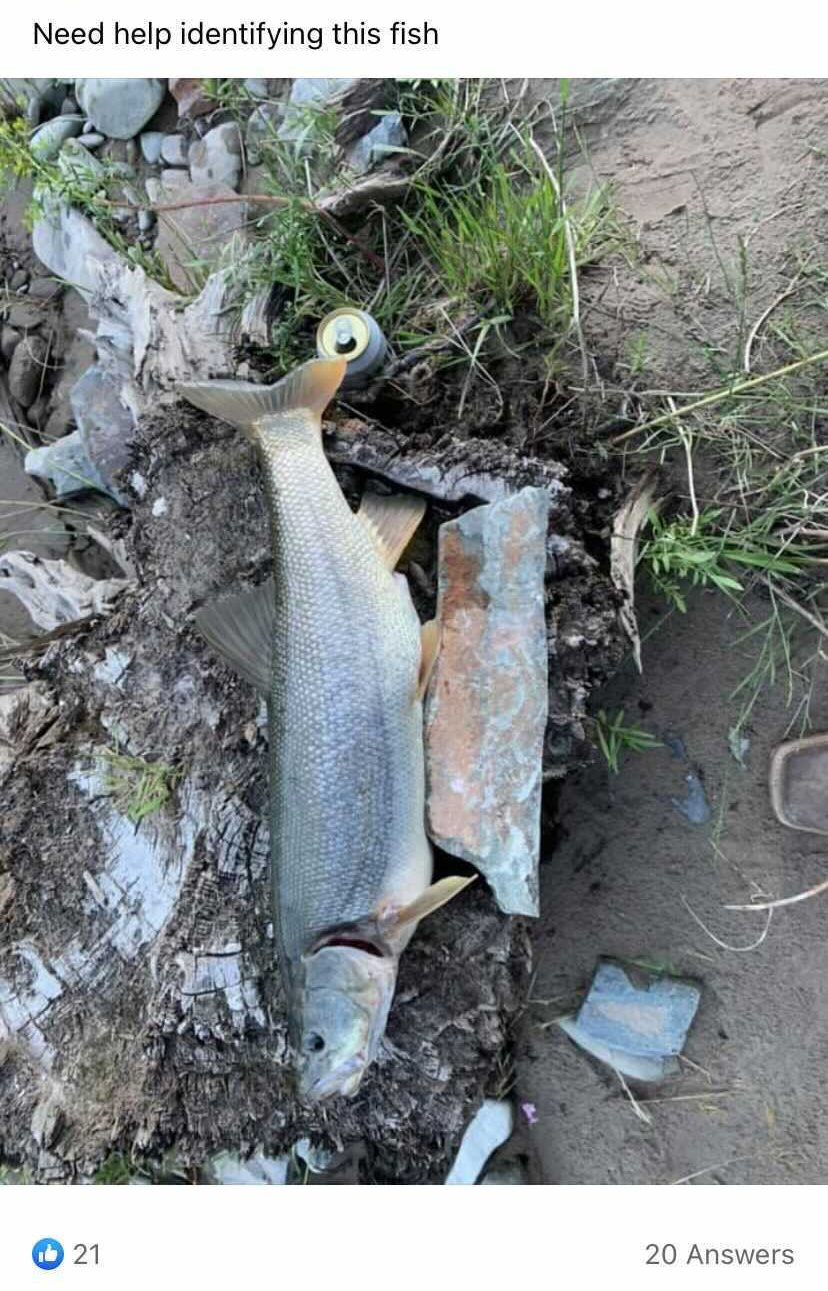 Both fish were dead and visibly drying on the bank, making it clear that the anglers killed these fish without knowing whether it was legal to do so. It probably was in many instances, like the northern pikeminnow above. No one is going to be too upset over the harvest of one of these suckers, but it’s worth mentioning that its close relative and lookalike, the Colorado River pikeminnow, is critically endangered. You could wind up with a huge fine or worse from killing one—then announcing that act to the world-wide web.

This reminds me of an egregious example I encountered face-to-face rather than on Facebook. We were waiting at an airstrip in the Frank Church-River of No Return Wilderness and began talking to another hunter who bragged about the “brook trout” he’d caught and eaten for dinner the night before. I knew by our location that they were bull trout before he could even trot out his phone to show me. The former is invasive to the West and managers encourage harvest. The latter is one of the most endangered and heavily protected native freshwater gamefish species in the country. Brookies and bullies are both char and look similar (kinda) but that’s no excuse for killing something you can’t identify.

In Montana, it’s not uncommon for me to come across whitetail deer, mule deer, and elk in a day’s hike in the mountains. Anyone think it’s still alright to “ground check” big game in this day and age? Many of our mountain hunting units are limited entry for mule deer or elk or both, while whitetail is usually over the counter. Do you think a game warden is going to buy any excuse you could possibly think of for killing a muley buck without a permit for that unit?

Fishing enforcement is often more lenient than big game, but the same ethical code should apply. Still, this trend seems to be on the rise.

"I've noticed folks doing this in the past, but it's become especially prevalent during COVID,” MeatEater’s Spencer Neuharth said. “I imagine there's a correlation between all those new and reactivated anglers and how many times these ID requests show up on Facebook.”

We spend a great deal of time and resources here at MeatEater trying to make fishing and hunting more accessible and comprehensible to novices. I hope any of you reading this see it as highlighting an avoidable faux pas rather than condemnation. At the very least, you can take a picture of the fish while it’s still alive and release it if you don’t know what it is. There are also several smartphone applications available that can identify fish with a quick photo capture, including FishVerify and Picture Fish. The former even provides the local regulations for each fish species based on your location. The Florida Fish & Wildlife Commission recently adopted the Fish Rules app for such purposes, and the regs for Massachusetts, California, and North Carolina are available on there as well.

Suffice it to say that there are better ways to figure out what species of fish you’ve landed than making an ass of yourself in front of a Facebook group loaded with experienced anglers. No one will be impressed by your catch if you lack the knowledge and self-awareness to back it up.

“I'm stoked people are out fishing and discovering new-to-them species,” Spencer said. “I just wish they figured out what fish they had before it hit a cutting board or they took a grip-and-grin in their kitchen."

The World’s Most Versatile Fishing Lure

Simplicity is grace, so they say, and there’s nothing more simple than a single chunk of oblong metal with a hook attached to the back. I find grace in the subtle and nuanced motions you can produce with a simple metallic spoon. You can slow-roll it deep or burn it shallow. You can jig it way down or skip it back across the surface if you have to. You can troll it or suspend it with bait under the ice. Best of all, you can swing it on a tight...

Ethical Killing: What About Fish?

My truck doesn’t have a temperature gauge. If the starter lags like an old-ass Labrador coughing itself off the floor, the air is probably below zero. This was one of those mornings, a good day for ice fishing. Thick ice is safe ice. Rick’s truck does have a temperature gauge, and it glowed -8 as we drove north. The reservoir—flush with fat, pre-spawn perch—settles in a basin of foothills 60 miles up-country. After a mid-point stop for wax worms...

A couple years ago, I saw a blog post that encouraged bass anglers to keep a bottle of Coke with them at all times. And no, it wasn’t for the caffeine high. Instead, fishermen were supposed to use this magical elixir as a healing agent for bleeding fish. The thought went that when a fish is gill hooked or gut hooked, you could pour Coke on the wound to stop the bleeding. The soda provided a combination of carbonation and acid to clean and...