Every spring, northern pike head for shallow, weedy bays to spawn in the reservoir near my home in Colorado. During their spring spawning period, pike are so focused on reproduction that these normally aggressive fish are nearly impossible to catch with fly gear or conventional tackle. It was a frustrating experience to be able to see these big fish slithering around in inches of water only to have them ignore my best presentations. I love eating pike, so I began searching for a way to catch fish that refused to hit a lure or fly. That search led me to bowfishing gear. After arrowing my first pike a couple years ago, I was hooked on hunting for fish.
Getting started in bowfishing isn’t an overly expensive endeavor. The basic gear list is pretty short. While some bowfishers use compound bow set ups, recurve bows are simple, affordable and easy to shoot quickly at the short ranges common in bowfishing. Take-down recurves are convenient, especially if you like to travel. A bow with a draw weight of 35lb to 45lb is sufficient.  PSE’s Kingfisher recurve is a good, affordable choice.  Look for solid fiberglass bowfishing arrows tipped with barbed points such as those offered by Cajun Archery. Retrieval systems include reels, drums and canisters. AMS canisters are one the best retrieval systems. Bowfishing line needs to strong and durable. Two-hundred pound nylon braided line will hold on to heavy fish and stand up to abrasions. Complete bowfishing kits are available that include everything you’ll need to get started. For do-it-yourselfers, check out this video on how to make your own bowfishing reel from traditional archery guru Clay Hayes.
Once you’re outfitted, you’ll need to check your state’s fishing regulations booklet. In some states, bowfishing regulations are handled in a separate section from hook-and-line regulations. These rules will include license requirements, what species can be legally taken with a bow, bag limits, and sometimes limited waterways where bowfishing is legal.
Practice is essential. Shooting fish is nothing like bowhunting for deer. You need pinpoint accuracy at point-blank ranges, which is surprisingly hard to master with the visual trickery that comes with shooting beneath the water’s surface. Always remember to aim low on submerged fish. Water refracts light so fish appear to be higher in the water column than they actually are. Different depths will require adjustments to your aiming point. If a fish is submerged even two feet below the surface, it can be very difficult to make an accurate shot. It gets even trickier when you add horizontal distance to the equation, so try to limit your shot distance until you get the hang of it. Anything beyond ten yards is a very long bowfishing shot.  For target practice, pour a couple inches of sand or gravel into a one-gallon plastic milk jug and then fill it with water. Anchor the jug at various depths in the water to give you a feel for where to aim. 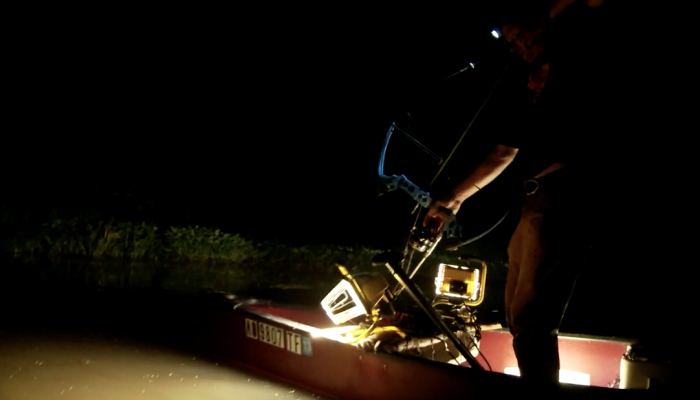 Shallow, clear water makes for the best sight-fishing conditions, but those conditions also make for spooky fish that are wary of predators. It’s always helpful to wear a good pair of polarized sunglasses to help you spot fish before they see you. And don’t let muddy water deter you from bowfishing. Fish are usually less spooky in muddy water and can be approached more easily. It’s possible to spot fish in shallow, off-color water by looking for the wakes and “nervous” water created by feeding or cruising fish. Fins or tails breaking the surface can also give away a resting or sunning fish. Wade slowly and quietly along the shoreline of shallow lakes and rivers just as if you were still hunting for deer. Look for weedy back bays, oxbow lakes, and sloughs. Flooded brush is also a prime location to ambush fish. If you can get landowner permission, farm and golf course ponds are great bowfishing spots. If you’ve got a boat and some spotlights, LED bars, or even a powerful headlamp, try bowfishing at night. After sunset, fish are less wary and more apt to cruise the shallows. 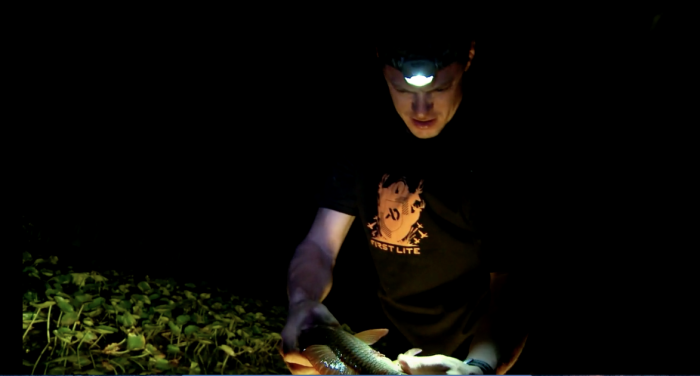 In most states, it is illegal to bowfish for species that are considered game fish. But there are exceptions. For instance, it is legal to target game fish such as northern pike and kokanee salmon with a bow and arrow in some Colorado lakes and rivers. Bowfishing for redfish, flounder, and other gamefish species is legal in Louisiana’s saltwater marshes. Bow fishermen can also tap into edible amphibians and reptiles like bullfrogs, turtles and alligators in some areas. You’ll need to read your regulations carefully to know which species are available. For instance, some states may allow hunting for catfish and bullheads, although bowfishing for prized game fish such as trout or walleye is illegal. 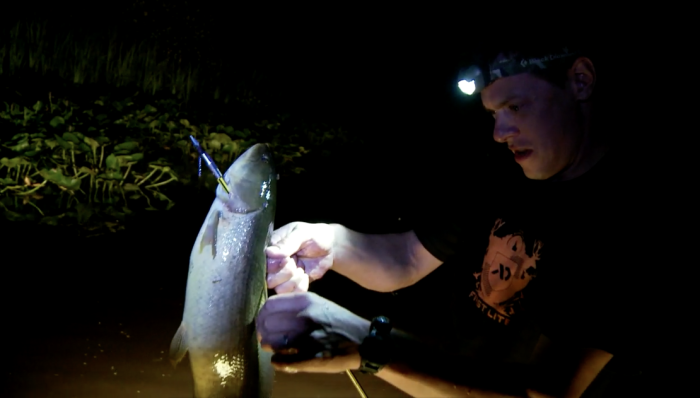 Non-game fish species, also known as rough fish, are almost always fair game. In many regions, bowfishing has been closely associated with well-meaning but ineffective efforts to eradicate invasive species of carp, including common carp, bighead carp, and silver carp. There are also other species of  native “rough fish” that bow fishermen frequently target such as bigmouth and smallmouth buffalo, freshwater drum, several species of gar, and many types of suckers. Throughout the entire country, these fish are readily available. The problem is they tend to have poor reputations when it comes to tablefare. For many people, shooting a boatload of “trash fish” that aren’t good to eat seems utterly pointless. But with the proper care and preparation, these species can be surprisingly tasty.
Brining and smoking is a cooking method that overcomes any fishy or muddy flavors associated with bottom-feeding common carp. Unlike the common carp, invasive “Asian carp,” such as bighead carp and silver carp, are not bottom feeders. They are filter feeders that eat plankton. Their meat is white and firm, though packed with bones. Try cooking them whole, or in steaks, and then flaking the cooked meat off the bones to prepare fish cakes. Breaded and fried “gar balls” are prepared much like fish cakes using the boneless upper loin portion of gar fillets. For other rough fish like bony buffalo suckers, pickling is a good option because the brine dissolves bones. However, the bones from many sucker species are very soft. My father used to skin and then grind whole fillets, bones and all, from white and redhorse suckers to make breaded and baked fish patties. 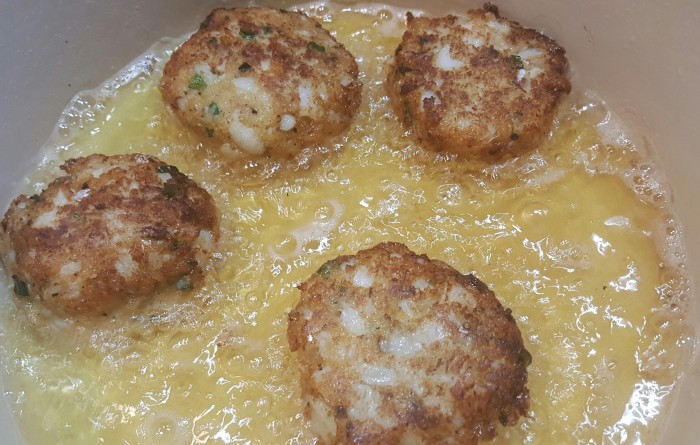 For many outdoorsmen and women, hunting and fishing are regarded as two completely separate pastimes.  Bowfishing is the ideal way to merge the two. With bowfishing, you get all the excitement of a spot-and-stalk hunt in an aquatic environment. If you’re already a bowhunter, bowfishing will keep you tuned up for hunting season. Most importantly, bowfishing is another way to take advantage of some readily available and underutilized types of fish in order to add more wild food to your freezer.
For more information on bowfishing, check out the Complete Guide to Hunting, Cooking and Butchering Wild Game Volume 2
Check out MeatEater Volume 5, Episode 2: Swamp Stew, Michigan Bowfishing where Steven returns to his cherished boyhood stomping grounds in Michigan’s Muskegon Marsh to bow-fish for sucker, bowfin, and gar. Along the way, he demonstrates the rich bounty of wild foods that can be found in this freshwater paradise. Featured meals are salt-packed sucker and fried gar.  Watch the trailer and you can purchase the episode at www.meateater.vhx.tv

From the poling platform I spotted the dark shapes—five or six of them—milling over light-colored bottom. “OK Dad,” I said, “I’ve got a group straight ahead, 90 feet.” I poled the skiff quietly, keeping my eyes on the black backs of the tarpon. They resembled suspended logs, except that every once in a while one would tail-kick or turn in a slow, daisy chaining pattern. Otherwise they hovered in place, motionless and unaware of our approach. Up...

How to Keep Catching Fish During Spring Runoff Floods

A couple Junes ago, an older angler walked down to the hole I was fishing to tell me that he likes that spot, only not when the water is flowing so damn fast and heavy. Wait a month and it will be better, young man. I nodded in acceptance of his sage wisdom, declining to tell him that we’d landed a 22-inch brown, a 24-inch cutthroat, and a 25-inch rainbow right there within the last 24 hours. And I’d fished that spot enough years to know that...