As an overworked and underpaid individual with family obligations and a budget, I typically get to fish about one day a week. With the occasional missed week and a few fishing-specific vacations, that ends up meaning I’m on the water perhaps 60 days a year. When I get out there, the goal is to catch fish as quickly as possible and not mess around with baits and colors that won’t work. So, 90% of the time, I’m starting my plastics fishing with some form of black-and-blue or green pumpkin.

In tidal or tannic water I may add in Junebug. When it’s super clear, Watermelon works its way into the mix. But whether I’m pitching or flipping a worm, a lizard, a craw, or a creature bait, I tend to keep it simple. I’d rather use my limited faculties to figure out fish location or presentation than to worry right off the bat about whether a slightly different shade of critter will make a meaningful difference.

My friend Clark Reehm, on the other hand, gets to fish well over 200 days a year, competing on the Tackle Warehouse Pro Circuit and guiding on waters like the famous Sam Rayburn Reservoir in East Texas. You might think he’d have highly specialized starting points, perhaps a detailed graph to tell him what color to try (anyone remember the old school Color-C-Lector?). You’d be wrong. Reehm works along the same lines I do—at least to start.

“You can only make one cast at a time,” he said. “Why wouldn’t you go with the tried-and-true colors?”

Indeed, despite the number of days he gets on the water, he’s always operating in fast-forward. He arrives at a new lake for a tournament and gets less than three full days to learn to navigate and fish it. When he’s guiding, his clients don’t want to cycle through 20 unproven shades looking for the first bite. He has to start with the known before expanding the range. Nevertheless, he knows that there are certain times and certain bodies of water where you better have something a little bit different if you want to be competitive in tournaments, or just catch fish consistently.

When those windows occur, you’d better be ready. Here are five oddball colors you should carry and try out from time to time. You never know when they may go gangbusters. 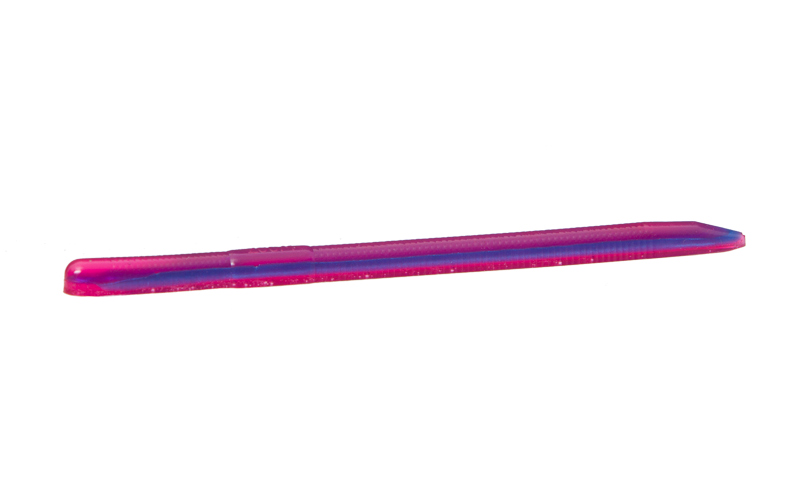 Morning Dawn, a translucent pinkish-purple hue, was a well-kept secret among certain spotted bass freaks until Kevin Hawk used it to win the 2010 Forrest Wood Cup on Lake Lanier. It’s about as far from black and blue or green pumpkin as you can get, but something about that pink “almost has a glow to it,” California (now Idaho) pro, Cody Meyer told FLW, and that makes the spotted bass bite. Turns out it’s not just spotted bass, though—largemouths and smallmouths gobble it up in clear water, whether you use a writhing straight tail worm or a Senko. 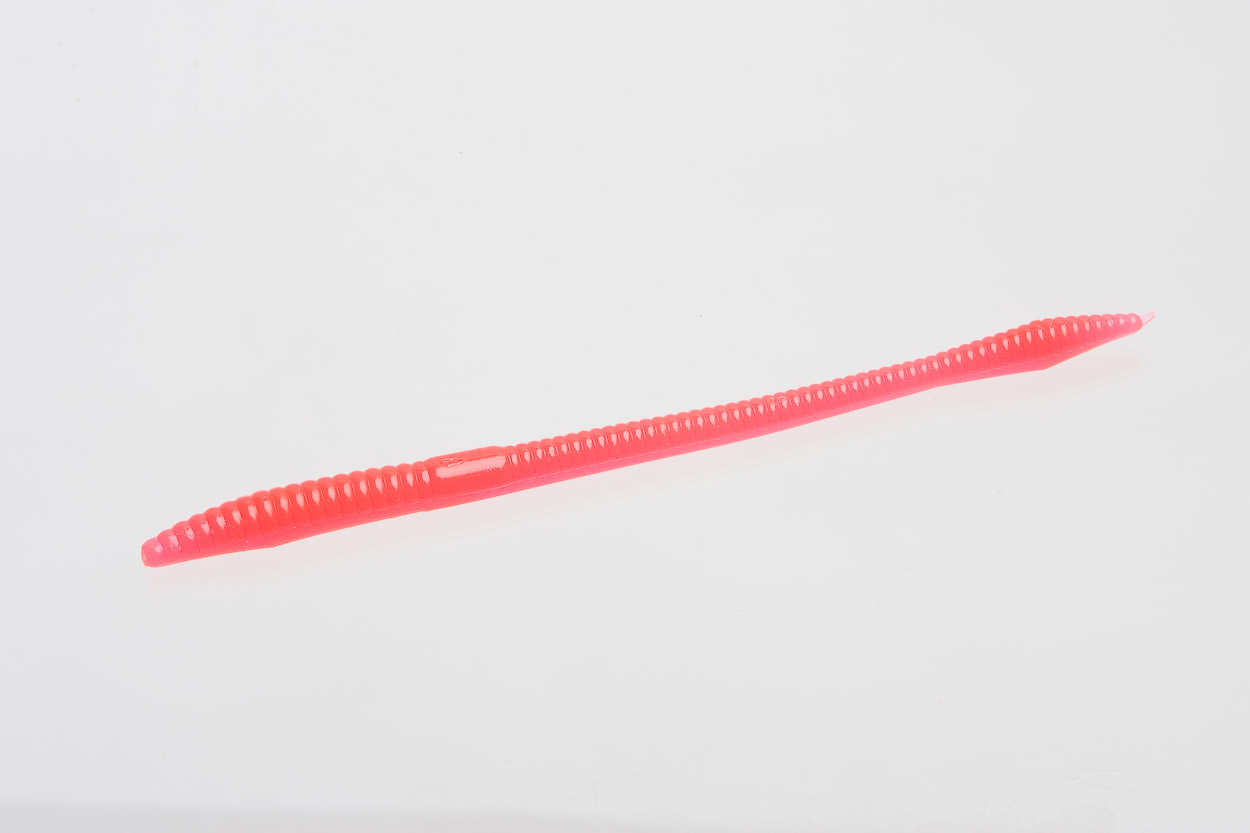 This additional pinkish color is named after an old-school antiseptic, and it’s best paired with a floating worm, which in some cases is a misnomer. For example, in the popular Zoom Trick Worm, the hook pulls the lure subsurface in order to make it walk the dog. There are times, particularly during the prespawn, when Merthiolate greatly outfishes the other gaudy colors typically used for this presentation, like Bubble Gum, School Bus Yellow, and plain old white. 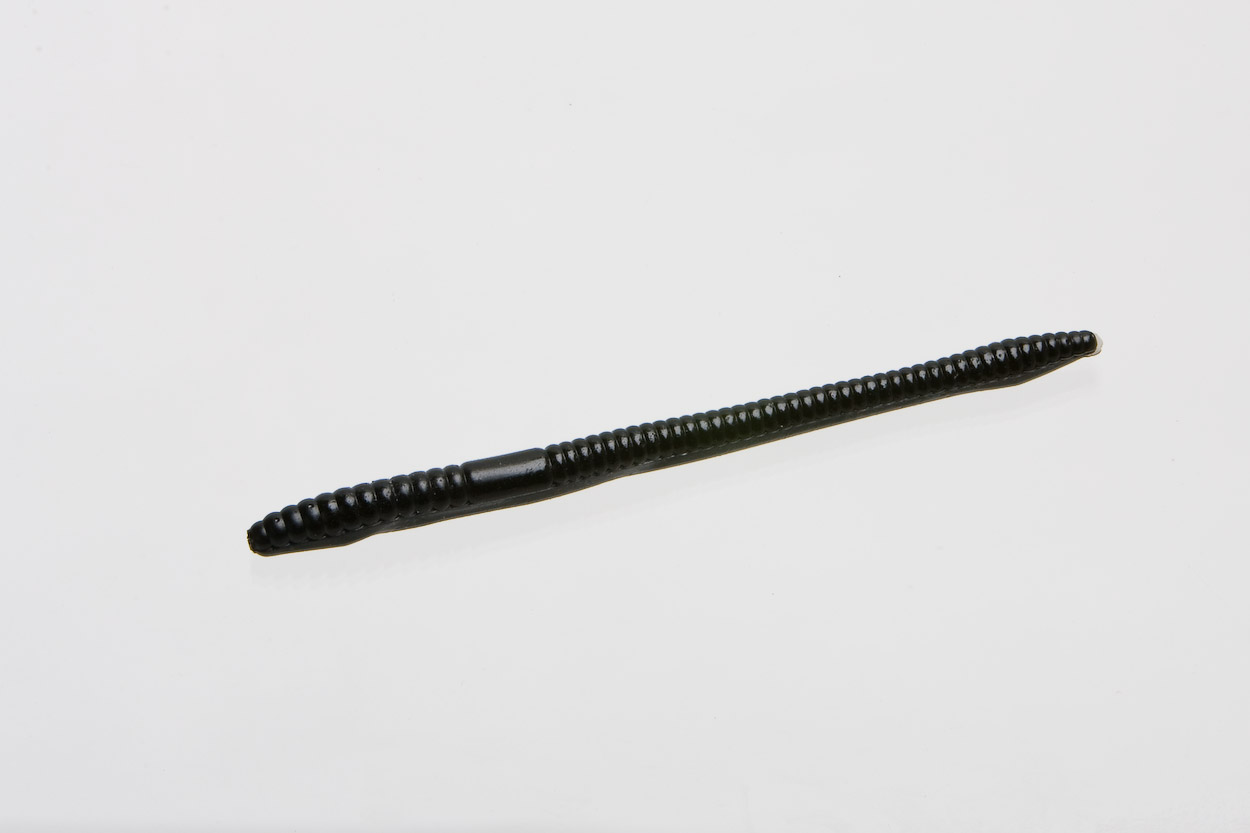 Black-and-blue, black neon, and black with firetails and chartreuse tails have never lost popularity, but basic black has fallen off the radar in some circles, despite being the most versatile of the bunch. Oddly enough, it’s particularly good at both ends of the spectrum, from super-clear to chocolatey-brown water.

“Look at how many things in nature are black,” Reehm said. “Eels, leeches, a lot of bluegills look black, and even shad have black on them. In low light conditions, they’re just seeing shadows anyway. Black makes the ultimate silhouette.” 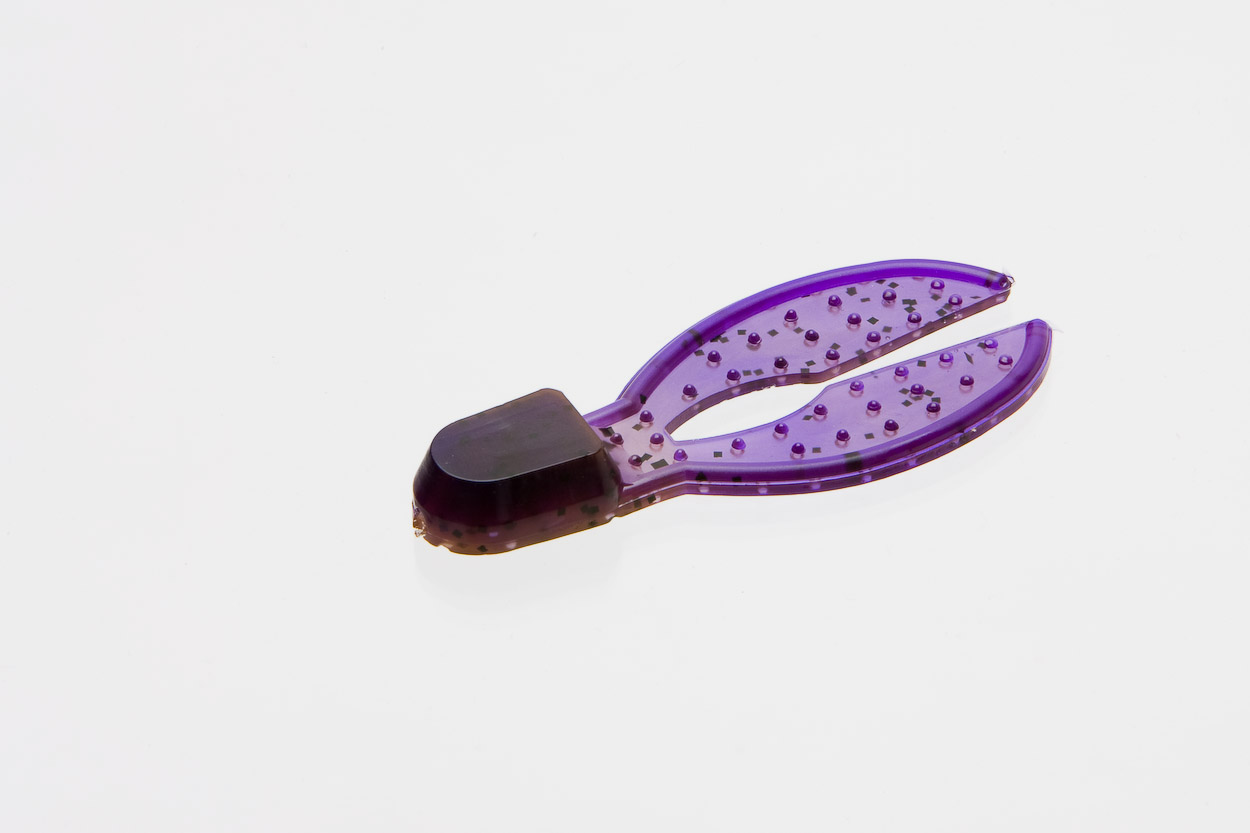 Like Reehm, veteran Bassmaster Elite Series Pro Chad Morgenthaler keeps his soft plastics simple, most of the time. Many of his biggest successes on tour have come while flipping heavy vegetation and under the thick mats with dark colors like black-and-blue that have a proven track record. Nevertheless, since moving to the Ozarks, where he guides on Table Rock and other lakes, he’s learned the immense value of Peanut Butter and Jelly (aka PBJ), which as the name suggests is a combination of purple and brown.

“I have no idea why it’s so deadly here, in a craw or on the back of a football jig,” Morgenthaler said. “The crawdads never go through that color in the molt, but I’ve seen times where it’s made a giant difference.”

Perhaps not coincidentally, a PBJ jig has been a longtime killer on the rocky desert lakes of the American Southwest. 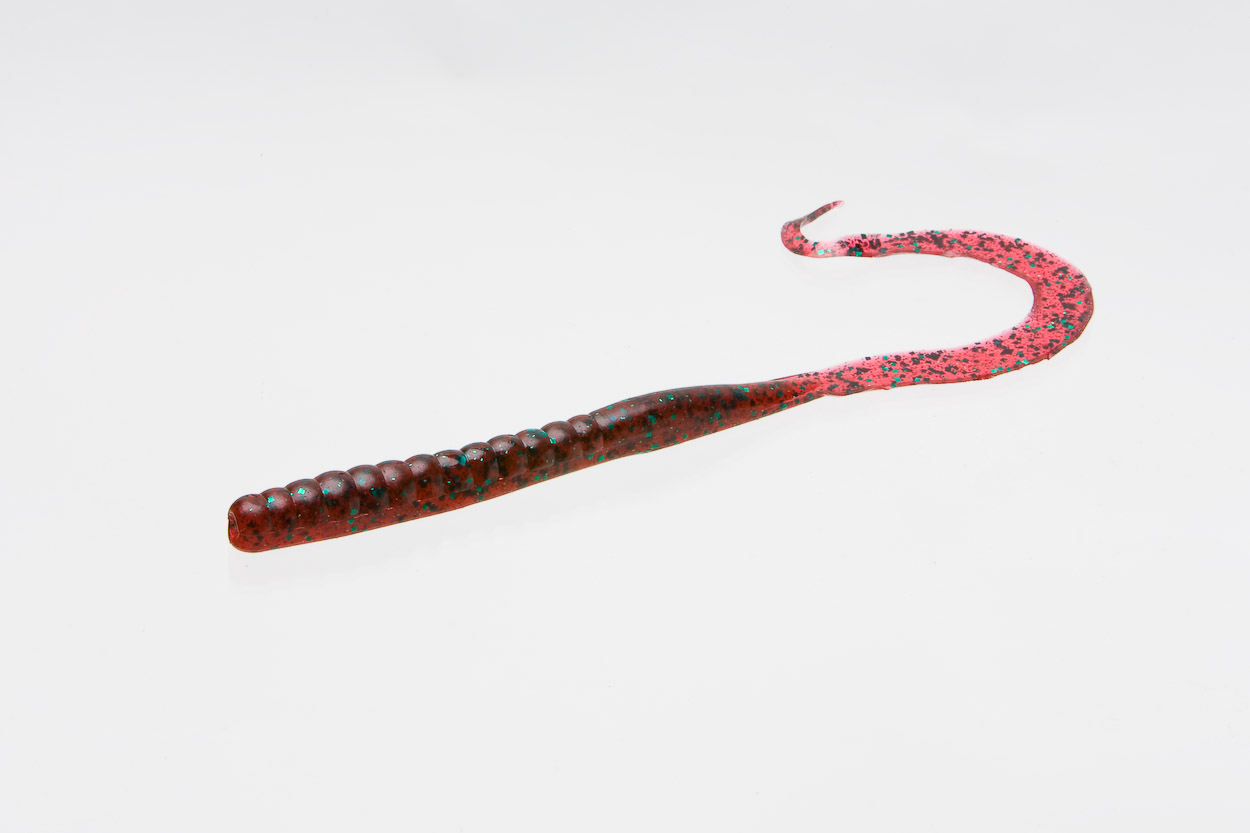 While bright red has been a longtime staple on Rat-L-Traps and vibrating jigs in the springtime, many anglers put this color range away once the spawn occurs. Morgenthaler said that’s a mistake. He may not stick with the Rayburn Red or Delta Red or Tomato Red that are so deadly pre-spawn, but other shades get the definite nod in the heart of the summer on all sorts of worms, from ultra-finesse models all the way up to magnum ribbontails. The key shades are Redbug and Plum, which are known killers in Texas and on the Tennessee River Chain, respectively, but Morgenthaler dotes on them at Table Rock too.

“Summertime all the time,” he said. “They almost always outproduce any other color worm. It doesn’t matter what the conditions are, sunny or cloudy.”

A Note on Color Names Most soft plastic color names are descriptive. Black-and-blue is usually exactly what it sounds like. So are Tomato and Plum. Descriptors like Green Pumpkin and Watermelon are a little less obvious at first, but make sense when you see ‘em.

Then there are shades that were popularized in certain regions or which are known to work on specific bodies of water: Falcon Lake Craw, Coosa Special, Okeechobee Craw, Potomac Blue, and South Africa Special all fit this bill.

In recent decades, manufacturers got a little more creative with their monikers, at various times pushing the limits of acceptable verbiage. Reaction Innovations, creator of the Sweet Beaver (which in and of itself could be questionable) led this trend with patterns like Honey Doo Doo, Tramp Stamp, and others that feel too dirty to say out loud.

In recent years our friends at 13 Fishing have found a nice middle ground with some exceedingly creative efforts on their Blunt Force and Bubble Butt worms including Cold Cuts, Whitey Tighties, Pimpin’ Purple, and my personal favorite, Skittle Fart. Oddball colors are fun not only for the great names but because they’ll sometimes help you catch bass other people are missing.

How to Catch Great Lakes Salmon

Biologists originally stocked Pacific salmon in the Great Lakes in the 1960s to help control the population of invasive alewives. Fifty years later, those first few little salmon smolts have turned the Great Lakes into one of the greatest salmon fisheries on the planet. Unlike their cousins in the Pacific Ocean whose numbers are dwindling and in serious trouble, the runs in most of the Great Lakes are generally doing quite well. Every year...

Make Your Own Damn Lures

When I moved to Ontario, our neighbor’s teenage son helped us unload boxes. Spying copious boxes labeled “fishing,” the boy looked at me with excitement. He said he had been fishing almost every day that summer, and I told him to pick out something as a gift for helping us. He was a little confused when he opened the first box and found wads of flamboyantly colored feathers and semi-preserved animal skins. “What is this stuff?” he asked I...

Pete Robbins is a veteran writer who’s been covering the bass world from all angles with a discerning eye for more than a decade. His work has appeared in many publications, including Bassmaster, Field & Stream, and Western Bass. He blogs regularly at Yamamoto’s Inside Line and he’s covered more than a dozen Bassmaster Classics from the water. Robbins is also a well-traveled bass addict and glitterboat freak. He’s based in Virginia, and MeatEater...