How to Catch Giant Bass on Giant Worms

In 2008, I fished as a co-angler in the Bassmaster Elite Series tournament on Falcon Lake on the Texas-Mexico border. You know it’s an epic event when midway through the first day’s weigh-in, the tournament director makes an announcement that you shouldn’t bother entering a largemouth for the big fish award unless it’s clearly over 10 pounds.

During practice for the tournament, I spent a day in the boat with Oklahoma’s Jeff Kriet. While making a business call, he parked the boat just off a point where I caught 2- and 3-pounders on every cast. On several retrieves, a fish got off and another one grabbed my worm before it got back to the boat. Normally, pros would be saving those fish for derby day in case things got tough. I was happy to catch them, but asked Kriet why he was so giving.

“Dude, if you’re weighing in 3-pounders at Falcon, you are in big trouble,” he replied. Indeed, in a field of 109 pros, it took an average of 5 pounds per fish to make the top 50 cut for Day Three. Steve Kennedy went home without a check despite weighing in 10 bass for 49 pounds total on days One and Two.

Normally during a tournament, anglers target big fish but tolerate smaller ones. At Falcon, every minute they spent battling a Tabasco-fueled-but-undersized bass was a minute they couldn’t be finding or fighting bassquatch. Accordingly, some pros started gluing together two 7-inch Senkos to create some serious Frankenplastics to fend off the smaller fish. But you know what? Hungry bass, especially smaller ones competing for their share of the forage base, aren’t going to be discouraged that easily. Not only can you catch 2-pound bass on 10-inch worms—you can catch 10-inch bass on 10-inch worms. They have large mouths (hence the name), large appetites, and an insatiable prey drive. And don’t forget that the biggest fish, while they’ll eat bite-sized offerings at times, want more bang for their buck. They need that bigger meal to function.

Accordingly, if you don’t have a 10-inch worm in your arsenal—whether you’re in Texas, Florida, Massachusetts, or Montana, you’re missing out. Bass of all sizes not only can eat them, but they’ll rush to eat them. 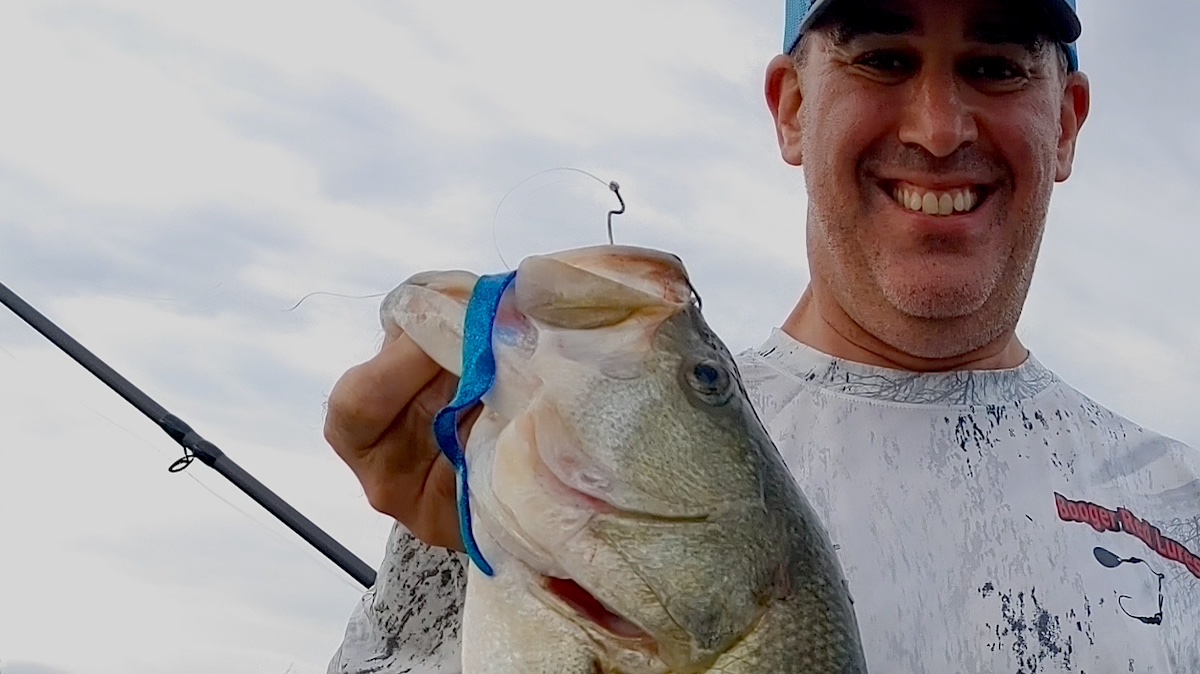 You should be throwing bigger worms. Not necessarily girth, but definitely length. Yes, I know there are times where it makes sense to dropshot a 3-inch straight tail or drown a 5-inch finesse bait on a shakey head. That’s true when bass are pressured or cold. It’s also often true in smallmouth country. But when you want to ensure that you get a big largemouth’s attention—or even that of a moderate-sized specimen—it pays go jumbo.

How Big is Too Big? Now let me add a caveat: My belief is that after 10 inches you see diminishing returns. I know some of the California big bait freaks successfully employ 14-, 18- and 20-inchers, but I don’t know if those will get you more bites than a 10. While my experience is only anecdotal, I truly think that as the worm gets bigger your hookup percentage starts to suffer. A 7/0 or 8/0 hook is only a few inches long, so on that 18-inch behemoth worm, a bass can grab 14 inches of soft plastic, tote it around the lake, and never get the hook point in his mouth. Furthermore, you may be surprised by how hard it is to cast a big worm a long distance with accuracy, especially in a crosswind and especially if it has a big, air-catching tail.

Then again, if you are convinced that bigger is always better, go ahead and push the limits. You can always bite or cut a bit off the head if you find that you’ve overshot the upper limits of effectiveness.

Terminal Tackle for Bass Worms Speaking of hooks, little ones won’t do. Consider 5/0 as a starting point and adjust up from there, keeping gap in mind as much as length. When you set the hook, all of that plastic will compress between the point and the eyelet, and if the opening is too small it will prevent you from getting good penetration. Whether you prefer and offset bend, an extra-wide gap (EWG), or a straight shank, many of them come in both “superline” and “regular” versions for braid and fluorocarbon/monofilament, respectively, so choose accordingly. And don’t forget that getting all of that plastic to the bottom may affect your choice of sinker: if a half-ounce model plummets your smaller worms at a foot per second, it may not be able to drag down that water-catching long worm model quite as quickly. That could be a feature or it could be a bug.

Best Bass Fishing Worm Color You don’t have to go crazy on color selection. I’ve been to Lake El Salto in Mexico more than 15 times, and if I had to choose one lure to fish there 12 months out of year, shallow to deep, it would be a 10-inch black worm with a blue tail. Add in a more natural pattern or two—some sort of watermelon or green pumpkin—and you are set for any place that bass swim.

Yes, I know there are regional favorites—plum on Tennessee River impoundments, red bug in Texas, junebug in Florida—so if you’re ready to invest a little more, add those. Out in California, or in super clear or super pressured waters, hand-poured concoctions get the call. But as a general rule, it’s the profile and location that matter more than the color. That said, it’s never a bad idea to keep some dipping dye or a chartreuse marking pen handy to add a bit of chartreuse to the tail. As with old black and blue, the veteran Mexican guides swear by their neon green garlic dye, both for the scent and the ability to see it a little bit better underwater.

Best Bass Fishing Worms • Berkley 10-inch Power Worm: This is the OG. Durable, proven scent, and a big old ribbontail that flutters on the way down with the slightest bit of manipulation or even while sitting on the bottom in slight current. There’s a 12-incher too, but they come five to a pack for a buck more than eight 10-inchers, so I’m not sure that the juice is worth the squeeze. • 13 Big Squirm 10-inch Ribbon Tail: A newer comer to the party, this bait has micro ribbing evocative of the infamous Senko and provides a similarly subtle wiggle. • Strike King 10-inch Rage Tail Anaconda: When you want to move a little bit more water or catch the attention of the fish in dirty water or from a distance, this ridged scythe tail gets the job done. • Gary Yamamoto 10-inch Kut Tail Worm: This one is a little more finessey than the first three, but at 10 inches it’s still a big presence. The tail, which literally looks like a curl tail that got cut short, pushes a little bit of water without being overbearing, and the tapered body moves seductively with only the smallest amount of current or angler-imparted action. • Xcite Baits MaXimus Worm: Unlike those listed above, this giant trick worm provides no meaningful tail action. It just tapers to a point. That makes it exceptional for power dropshotting (aka “Bubba Shotting,” once again turning the finesse game on its ear) for pressured bass that won’t eat something that gets in their faces and antagonizes them more violently. It’s great on an oversized shakey head, too.

Let’s be honest: most of us fishing for bass are looking for that one to write home about. Super-sized plastic worms select toward those bigger fish without completely shutting out the smaller ones that keep a day interesting. Ten inches might seem like a lot of plastic but that often reads as a solid meal to a bucketmouth.

The Best Crankbait Colors for Bass

The only factor limiting the number of crankbait colors available to crass-consumerist bass anglers is the amount and variety of paints on Earth. The pandemic may have caused supply chain shortages, limiting us to the basic color choices, but that doesn’t bother East Texas pro Keith Combs. “I probably carry in my boat about 20 colors of key crankbaits,” he said, slightly sheepishly. “But I usually reach for my confidence colors first. Those are...

How to Catch Pressured Bass

When I was a kid, my dream was to become a professional bass fisherman. Every Saturday morning, while other kids were wasting their time with cartoons, I was up early watching the tournaments on ESPN. The pros in those competitions, standing on the podium or in the back of their glitter-finish speed boats and hefting two giant bass out of the livewell to the roar of the crowd, they were my idols. I had bass pro action figures, bass boat posters...

Skip, Flip, Pitch: How to Catch Big Bass Under Cover

As I’ve said before, if you don’t get thrilled by a vicious topwater strike, we probably can’t be friends. I get particularly excited by a big old finned freak of nature coming up through a film of vegetation to explode on a hollow-bodied frog, but I’m not picky—a Whopper Plopper, popper, or Spook get the juices flowing just as fast. The truth is, though, unless you’re a topwater purist willing to accept lower catch rates, man cannot live on...