Trophy Meals: Beer and Citrus-Braised Wild Game Carnitas Street Tacos
The best street tacos I’ve found were sold at a small Mexican grocery store in Colorado. For a few bucks, you could load up on a variety of carnitas tacos made from beef tongue, pork shoulder or chicken thighs. They were simply prepared, seasoned perfectly, and garnished with only a few toppings. In the interest of translating this meal into the world of wild game cooking, I came up with a recipe that does a good job of turning venison or small game into delicious street food.
I like to use pronghorn antelope shoulder roasts or wild turkey wings and legs for the following recipe but you could just as well use wild pig, elk, bear, or rabbit. Really, just about any wild game meat that lends itself to slow cooking works well here. Neglected cuts like tongue, shanks, and neck roasts are particularly ideal. Just be careful to avoid lean cuts like backstraps or sirloin roasts because they tend to dry out when slow-cooked. Since the braising process takes a while, I’ll often do this step the day before I plan on making the tacos.
Ingredients:
2-3 lbs big game shoulder, neck roast, shanks, wild turkey legs and wings, rabbit, or squirrel
2 bottles Mexican beer
2 small oranges
1 lime
1 tablespoon cumin
6 whole cloves
1 cinnamon stick
1 coarsely chopped small onion
2 cloves chopped garlic
Olive oil
Salt, pepper to taste
2 tablespoons agave nectar or honey
Queso fresco
Chopped white onion
Chopped cilantro
Chopped tomato
Lime wedges
Small corn or flour street taco tortillas

First, in a Dutch oven or slow-cooker, season the meat with salt and pepper then cover with olive oil. It’s especially important to add a little fat to lean animals like deer or rabbits. Next, add two bottles of Mexican beer or enough to almost cover the meat. Add the chopped onion, garlic, cumin, cloves and cinnamon stick. Slice the oranges and lime in half and squeeze the juice over the meat. Add the juiced oranges and lime to the pot. If cooking in a Dutch oven, braise the meat in a 300 degree oven until the meat is fork-tender. Cook on low heat in a crockpot. This should take at least a couple hours for small game and 4-6 hours for venison cuts but don’t rush it-longer is better. Add more liquid during the braising process if necessary.
Once the meat is cooked until tender and falling apart, it’s time to turn it into carnitas. Remove the cloves, cinnamon stick and any bones from the braised meat. Shred larger chunks of meat into smaller pieces with a fork. Pour enough olive oil to coat the meat into an iron skillet or frying pan. Over medium heat, add the meat and a little of the braising liquid to the frying pan. Fry until the braising liquid is evaporated, then add a couple tablespoons of agave nectar or honey and mix this into the meat. As it caramelizes, it helps to flavor and crisp the meat. Continue frying until you’ve got an even mix of crispy and tender meat. Then remove the pan from the heat immediately. Keep an eye on things during this process so you don’t burn the meat.
If you want really impress your guests, you can make your own tortillas while the meat is cooking. Most of the time though, I buy one bag each of small corn and flour taco tortillas from a Mexican grocery store. Warm the tortillas in the oven or fry them for a minute in hot oil just before it’s time to eat.
Serve the tacos with queso fresco, chopped cilantro, white onion, tomato, and a squeeze of lime juice. You can add white rice or extra toppings like salsa, guacamole or a red chile sauce. However, the basic street version is all about the warm, light flavors of the beer and citrus-braised meat without a lot of extras. Have plenty of ice-cold Mexican beer on hand to enjoy with the tacos. 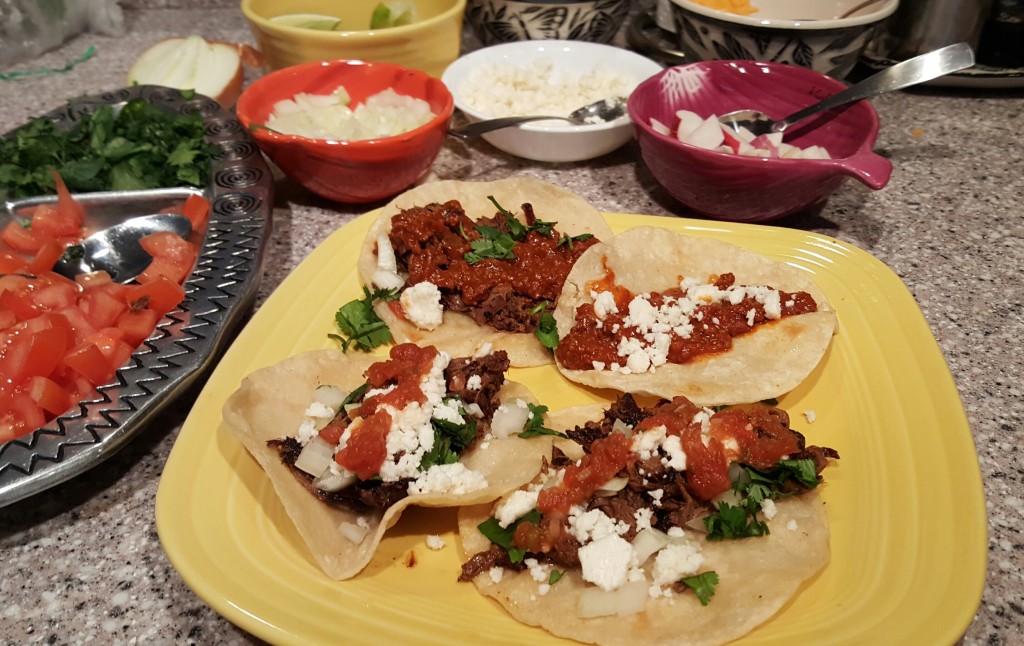 Recipes ,
Get the latest in your inbox
Our picks for the week’s best hunting, fishing, wild foods, and conservation content.
Big bucks, land management, rut reports, and tips for the whitetail obsessed.
Privacy Policy

Chorizo is a spicy pork sausage that’s not commonly associated with wild game. There’s many versions...

Chorizo is a spicy pork sausage that’s not commonly associated with wild game. There’s many versions...