Cioppino (Cho-Pee-No) is a fish stew that was made famous in San Fransisco by a Italian immigrants back in the 1930s. It was made with the catch of the day and served on Fisherman’s Wharf.

The name Cioppino is derived from Ciuppin, a classic Italian soup. But some claim the name is also short for “chip in.” Legend has it that when a fisherman would come back to the docks emptyhanded, he would walk around with a pot asking others to chip in whatever fish and shellfish they could spare. Anyone who contributed could expect the same charity in the future. The stew was always a different mix of seafood since they made use of what they had on hand.

In the Midwest, our local catch consists of walleye, northern pike, birds or venison. I wanted to rely on these wild ingredients, which is why I included hot Italian venison sausage in my version of Cioppino.

This stew uses walleye fillets and cheeks—the small pockets of meat found below the eye. I like to think of them as little scallops, and a strong argument could be made that they are the best part of the walleye.

Most fish stews call for firm fish. Because walleye and pike are so flaky, they fall apart very easily. It’s important to add the fish towards the end of cooking and avoid stirring until ready to serve. If you use more fish than called for, you might need to double up on liquids by using more wine and clam juice or seafood stock. 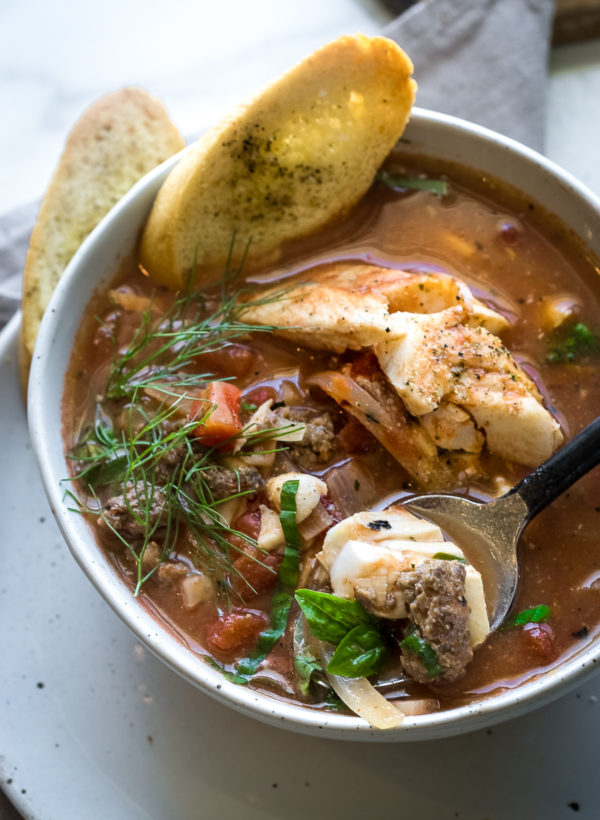 How to make it

Depending on where you hail from determines what you call a loose meat sandwich. With...

Depending on where you hail from determines what you call a loose meat sandwich. With...