How to Cook a Turkey Tail

I’m a curious cook by nature. I’m also a frugal cook who tries to utilize animal parts that most folks leave in the field. My freezer is full of odd things like hog testes, alligator cheeks, and the alien-looking chunk of protein that is a turkey’s tail with the feathers removed.

Being the guinea pig to such experiments can sometimes be unpleasant, but now and then I discover something fascinating. For instance, I learned that the sponge from a male turkey is mostly collagen and fat that can intensify the flavor of stock.

Eating turkey tails is nothing new. There are cultures around the world who savor these odd bits, so why not hunters?

As foreign as it may seem, people have been cooking the “pope’s nose” for a long time. The U.S. exports most of these less favorable cuts to the Pacific Islands where they consider it a delicacy. The popular cooking method is to braise until tender, then fry for a crispy finish. Here in the South, the tails are more common table fare. Many folks enjoy them smoked and served over a bed of collard greens.

Up until recently, I assumed the tail was just a bony piece of flesh. After a quick Google search, I learned that it contains a lot of fat—which explains its popularity.

Before starting in the kitchen, I should mention a couple of details. On the underside of every tail, you’ll find a gland full of the oil that birds use for preening. I know from personal experience that any sack of fluids you slice into while butchering is bad news. Cut it off before cooking, along with the skin.

Since I’d never cooked turkey tail before, I was determined to not reinvent the wheel. I decided it would be best to prepare it the way islanders do: turkey tail adobo. 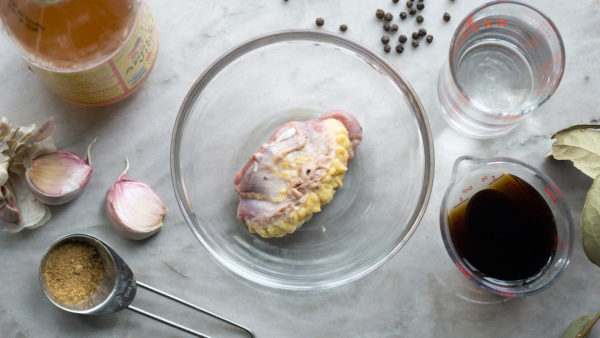 Adobo is a traditional Filipino cooking technique that involves marinating meat and then braising it in the marinade. The recipe called for vinegar, soy sauce, water, brown sugar, garlic, and peppercorns. I placed the tail in a small bowl and covered it with the marinade. After a few hours, I transferred everything to a pot and turned the heat to low.

I let the chunk of meat simmer for about three and a half hours until it was fork tender. After dredging in flour and frying, I gave it the taste test. Fantastic.

The sour adobo sauce cuts through the rich meat perfectly. It’s the kind of guilty-pleasure meal I could see myself eating late at night from a food truck or with a cold beer while watching football.

Even though this tail came from a sizeable tom, it’s still smaller than that of the average domestic butterball. Despite its size, the taste of those few bites was enough to let me know it’s value. It’s the kind of food revelation that makes me question what else we’re missing.

While I understand that spending so much time cooking one turkey tail isn’t exactly practical, I urge you to save them anyway. If you shoot several turkeys a year, you can serve tails as appetizers to your adventurous friends. Another option is to toss the tail in with the bird’s legs or thighs when braising. That will render out the fat and impart flavor. At the very least, you can utilize it in stock.

So next time you pluck the tail feathers from a turkey, spend an extra moment to save the butt end. Take advantage of everything your bird has to offer by eating nose-to-tail, literally. 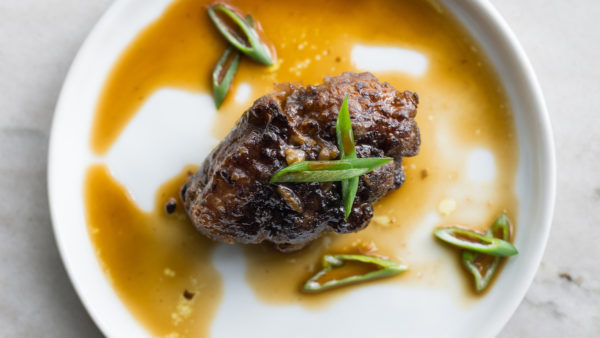 How to Perfectly Cook a Venison Steak

Backstraps from elk, deer, and antelope are some of the most prized wild game cuts . Their tenderness and shape yields excellent steaks, and every hunter should  know how to properly handle them. Here’s how to get a juicy, perfectly seared venison steak every time. Butterflies, Medallions, or Filets? Everyone has their favorite way of turning a backstrap into steaks. But before you start breaking them down, take a moment to consider a couple of...

How to Cook Diver Ducks

Diver ducks, migratory waterfowl that feed on fish, mollusks, and aquatic invertebrates, get a lot of praise on the wing but a bad rap at the table. Despite this reputation, hunters sure shoot a hell of a lot of them each season. According to the University of Nebraska-Lincoln, the take of shovelers, scaup, ring-necked ducks, eiders, oldsquaw, scoters, buffleheads, goldeneyes, mergansers, and canvasbacks is well beyond a million birds annually...

How to Cook With Caul Fat

When field dressing a deer, you may notice a sheer, lacy net covering the stomach. Don’t mistake this as something to be left in the gut pile. It’s a web of valuable fat that can be used to wrap around meat to impart flavor, juice and shape. Caul fat, sometimes referred to as lace fat, is a delicate, thin membrane of connective tissue with fat deposits embedded in it. This thin membrane covers the stomach in the abdominal cavity found in deer...