Is a Turkey Sponge Edible?

When I began to remove the breast from my first tom, I was dumbfounded to find handfuls of a yellow, jellyfish-like substance in front of the crop cavity. I wasn’t sure what it was at the time, so it stayed in the woods.

With a little research, I learned that this gelatinous tissue is called the breast sponge. The sponge of a gobbler is undoubtedly a curious trait. Nature provided turkeys with this useful mass of tissue with the sole purpose of storing fat. During the winter they begin building up this reservoir, and by spring, the gobbler’s chest is plump.

The sponge deteriorates throughout the mating season as the males strut for the hens, too focused on love-making to worry themselves with eating. During this time, the turkeys survive on their reservoir of fat. However, not every male turkey you shoot will have a sponge.

Knowing that the sponge is primarily fat, it begged me to question why we discard so quickly.

“I have never known anyone to eat it. But I know of no reason not to eat the sponge fat,” Abernethy said.

I researched the sponge more in depth, but fell short of finding any information in the hunting community that would help me in the kitchen. So I turned to the commercial meat industry for answers and hopefully understand what they do with the sponge.

I reached out to the good folks at ROAM ranch, a regenerative farm with pasture-fed livestock, including turkey. When asked if commercially farmed turkeys grow sponges, co-founder Taylor Collins noted that white turkeys, like the butterball on your Thanksgiving table, grow so fast that they “cannot run, scratch, breed or fly.”

“Basically, they are bred to not be turkeys. These birds never mature past 3-5 months in age. In industrial farming, no sponges ever develop,” Collins said. “If we allow our males to mature into spring, they will develop a sponge. No one is raising large males like this, however, because economically it’s impossible to make money holding a pasture-raised heritage turkey for longer than 6-8 months.”

What this means as hunters is that we have an exclusive opportunity to experiment with the sponge instead of throwing it out.

It’s common for our community to make assumptions about cooking with wild game and accept nonfactual things as fact. However, I don’t toss something in the trash based solely off of hearsay. If that was the case, I’d never eat antelope or burbot. I’m willing to find out whether or not the sponge is edible, even if it means learning the hard way.

This spring I saved the sponge of a large tom I killed in the Texas hill country, with the outer skin plucked and still attached. Since the sponge is mostly fat, my goal was to render it into schmaltz.

Unlike the dense, waxy texture of deer tallow, a turkey’s sponge is a mound of jelly in its raw state. I attempted to make as clean of cuts as I could make with the slimy substance, roughly chopping them into 2-inch pieces. I placed them in a pot with a splash of cold water at the bottom. Adding water allows the fat to heat up without scorching the tissue; this is called wet rendering. 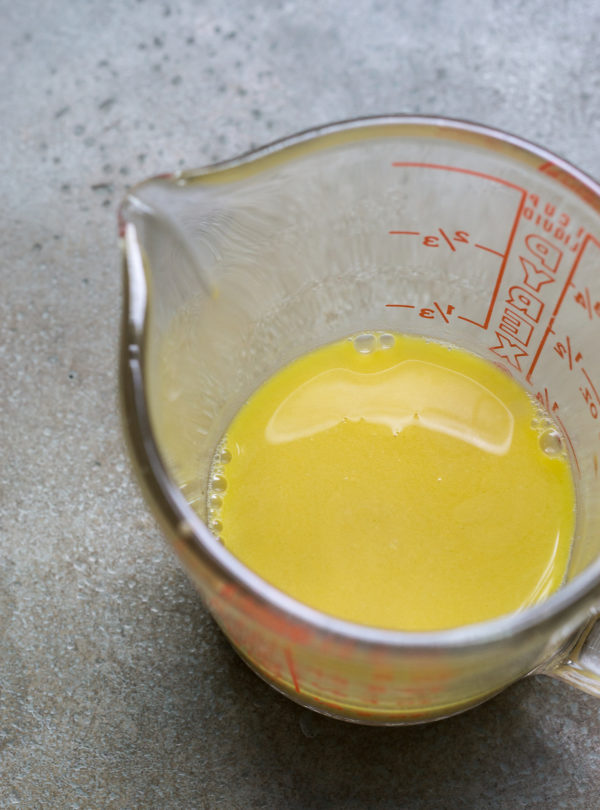 I set the heat to low, and within an hour the water had nearly dissipated. The jello-like sponge firmed up into bright yellow, gristle-like pieces. I was disappointed to find that there was no oil releasing from the chunks and instead were beginning to dry out. I wasn’t giving up.

I added another half cup of water. Another hour had passed, and I was beginning to see the same results. This time, however, the kitchen was filled with the savory aroma of turkey. It smelled as though I had a large pot of stock going next to it.

There was about a spoonful of the vibrant liquid left in the pot. I nervously scooped it up to taste, half expecting a terribly foul flavor as a result of shooting a turkey when testosterone levels are at an all-time high.

Thankfully, that was not the case; in fact, it was the exact opposite. It was delicious!

At this point, I realized I wasn’t getting any fat to melt out of the tissue the way I wanted. Instead of trying to render the sponge into schmaltz, I filled the pot to the brim with water. I kept the heat on low and allowed the sponge to gently simmer longer as it leached yellow fat and flavor into the broth. After another four hours, the color of the sponge turned gray, signaling that I had extracted all that I could. A quick pour through a fine mesh strainer resulted in about a 1/4 cup of pure, liquid gold.

The reduction had the appearance and mouthfeel of butter. It tasted almost as if I had dissolved an unsalted bouillon cube into an emulsion of water and oil.  However, I know that collagen concentrates in the skin, tendons, and bones of animals and dissolves into gelatin when heated. My educated guess is that I extracted a generous amount of gelatin from the sponge’s skin along with fat and flavor.

I lacked time to explore further, so the sponge reduction is currently stored in a jar, frozen until ready to consume.

I plan on using it in a pan sauce to accompany the turkey breast. I might incorporate wine and artichokes, or maybe keep it simple with fresh lemon and capers.

Discovering that the sponge is rich in flavor was a better outcome than I could have hoped for. I don’t doubt that adding the sponge with the carcass in your next batch of turkey stock would significantly enhance the flavor and viscosity.

There is still plenty of room for experimentation, and I haven’t given up on trying other methods to render the fat successfully. Luckily, I have three tags left to fill this spring.

How to Butcher a Turkey

Preparation for a turkey is key, if the bird is prepped correctly the options are endless, when it comes to recipes. Once a turkey has been plucked, the turkey can be used for any whole preparations such as stuffed and roasted Thanksgiving-style turkey. What I generally like to do,  is split the bird in half so that I’ve got two manageable-sized pieces. This lets me enjoy the turkey in parts, rather than all at once, and it takes up a lot less...

There are a lot of benefits to grinding your wild game at home rather than taking it to a processor. The obvious reason is having control over the entire process, knowing that only your hands touched your food. You also get to make decisions about how much fat you want to add and what seasonings you want to use in your sausage. Plus, if done correctly, home-ground meat will have a better texture, which makes a huge difference at the dinner table...

The Total Guide to Caul Fat

When field dressing a deer, you’ll find a thin, lacy net covering the stomach. Don’t mistake this for something to be left in the gut pile. Although it doesn’t resemble a prime cut, this web of valuable fat is great for imparting flavor, moisture, and shape into meals. What is Caul Fat? Caul fat, sometimes referred to as lace fat, is a delicate, thin membrane of connective tissue with fat deposits embedded in it. This sheath covers the stomach in...