What Cowboys Can Teach Us About Cooking Testicles

The American cowboy is a dying breed. Customary grazing rights have been lost or rescinded. Homesteads have been sold to the wealthiest bidder. All the while, beef production has increasingly been shipped overseas. Yet, some traditions of the West refuse to die off.

Annually, ranchers across the U.S. throw what is known as a “branding.” Families join together to share and celebrate the work of baptizing new stock. In either a dusty or muddy mess, calves are lassoed, wrestled, and stuck with a hot iron signifying the brand of the ranch. This marks ownership of a given cow so they can be properly sorted, doctored, and eventually shipped off.

However, the pinnacle of the event is a rough castration, pushing any sane man to squirm. A “cutter” (different than a dark cutter) makes an initial incision around the scrotum exposing the two testicles. With some finesse, he or she begins pulling the testicles while evenly slicing at the resistant spermatic cords. It’s a short operation lasting less than five seconds, but haste doesn’t make it any easier to watch. The cutter is left holding two testicles and the calf is left weighing approximately 10 oz. lighter. 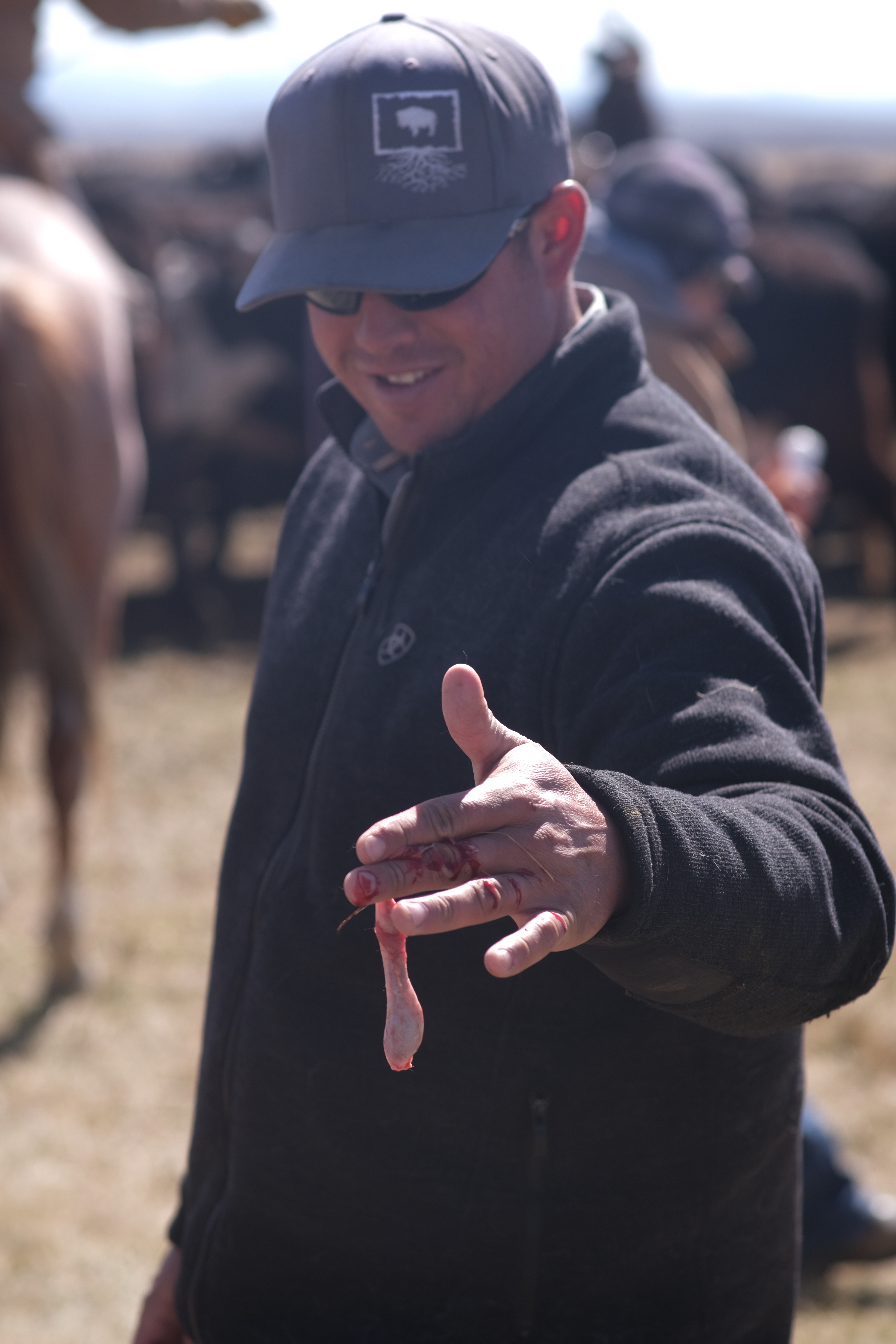 The purpose of castration is to create a more docile animal, reducing the likelihood of fighting and aggression towards humans. In a similar vein, castration prevents any unexpected pregnancies. Meat quality is also improved by lowering testosterone, creating a more tender and marbled product.

After the last brand sizzles, it’s common practice for the calf nuts to be thrown directly from the coffee can they were collected in onto the branding iron fire. Uncleaned and uncut, the hot fire makes a charred, chewy treat that signifies the work for the day is done.

Cowboys Use Everything Writer and poet Tyler Julian grew up working for Julian Land & Livestock, one of Wyoming’s largest sheep ranches. His family’s herd stretches for hundreds of miles across the desert and alpine landscapes. When the lambs hit a certain size, it’s time to dock their tails, snip their nuts, and brand them with paint to avoid ruining wool.

While “lamb fries” are far from being his favorite meal, Julian spoke of the plethora of protein sitting in buckets at the end of the docking day: “It’s indicative of the rancher mentality to use all of the product we can.”

Before the days of high-tech nut-cutters, sheepherders would use their teeth to remove testicles, according to Julian. Their grizzly attitude and aversion to waste is a quality all hunters should strive for.

Cultures that Castrate Testicles, like blood, are an ingredient enjoyed on a global scale. They can be found in markets from Europe to South America to Asia to be prepared in a variety of ways. Excluding cowboys and big game hunters, Americans generally turn their noses up at this offal, occasionally consuming it as a gag in a Western-themed bar, though the joke doesn’t land the same in other countries.

The vaqueros and gauchos of Spain and South and Central America call them "criadillas" or "huevos de toro," depending on the region. While frying them is a popular method of preparation, they are also known to boil, dice, and eat them in tacos.

Hungarians prepare a dish called Kakashere Pörkölt or Rooster Testicle Stew. In it, chicken balls are stewed in a medley of vegetables and served over a carbohydrate. Avian testicle size varies, though chickens seem to be “up there” in comparison. Remarkably, many flying birds express an increase in testicle size during their breeding season, and the organs tend to atrophy during non-breeding months.

Sheep and goat balls are preferred over bovine in the Middle East due to the animals’ nomadic partiality and ability to survive on sparse vegetation. Using exotic spices and traditional ingredients, Northern Africans occasionally substitute lamb testicles for meat in a dish called tajine. 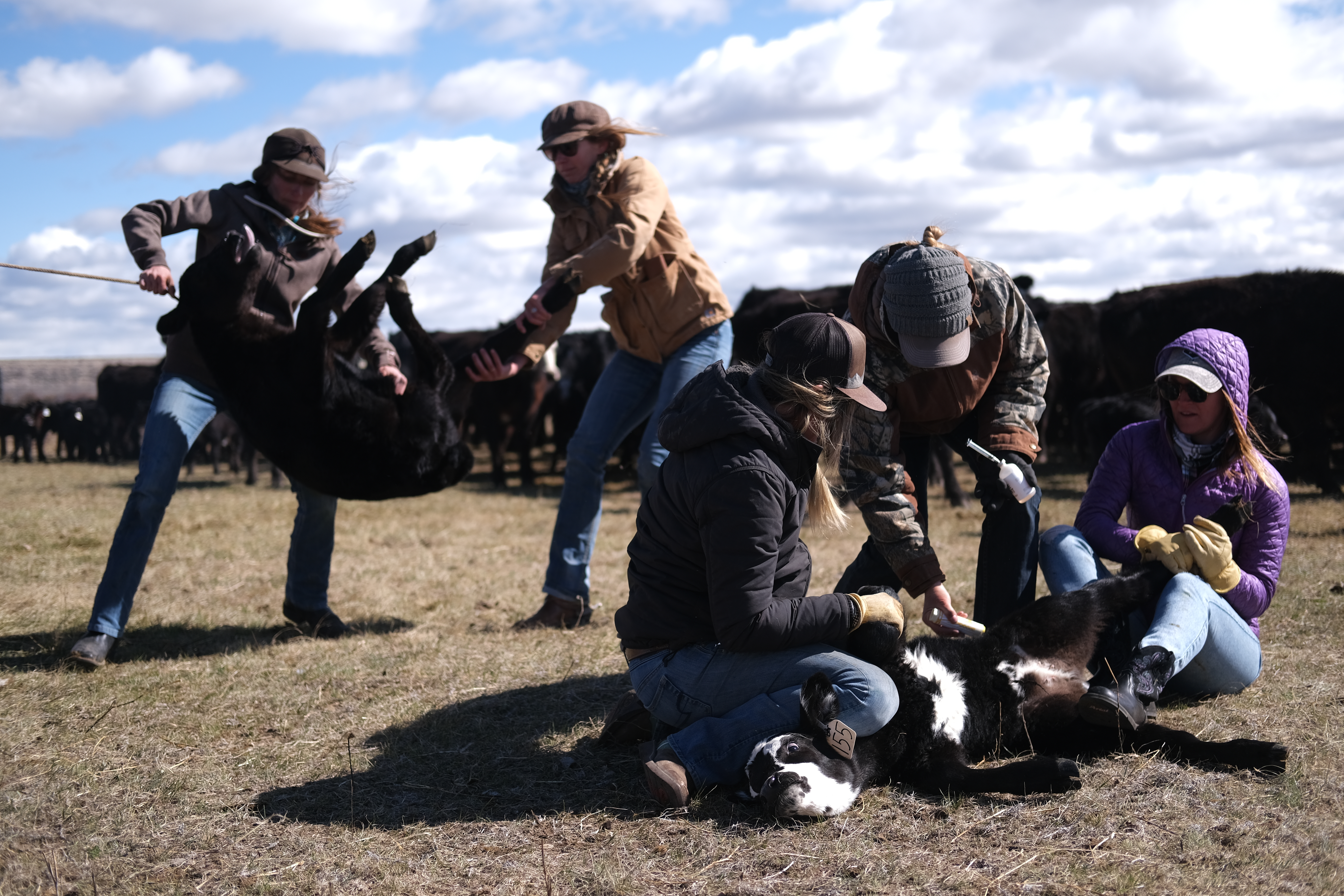 How to Clean Testicles Following a branding, among a pile of crushed Coors cans is a zip-lock bag filled with testicles. While the grass, sticks, and dirt weaved into the vascular mess may appear inedible, it’s easily mended by a sharp knife and brine.

To make the brine, mix half a gallon of water with half a cup of salt until the salt is dissolved.

Start by cutting a slit in the outer skin and peeling back the protective layer surrounding the testicle. Pull the skin up toward the spermatic cord and cut at the junction. Throw away the spermatic and vascular cords and excess skin, keeping only the cleaned testicle. Soak these organs in the brine for at least one hour, preferably three.

This process can be time-consuming when processing hundreds of animals but takes only a few minutes if you are working with one game animal. After brining, the testicles can be frozen or cooked immediately after you pat them dry. Commonly, ranchers will freeze the loot for later use after a long day of wresting calves.

How to Cook Testicles Size is the major difference between young domestic animals and game testicles. Bull elk huevos rival the circumference of a lemon—not quite bite-sized. By the time fall hunting season rolls around, even a male calf elk will begin to develop a sizeable pair. Antelope and deer, while smaller than elk, will still be quite large. To alleviate this problem, hunters can cut them up into more manageable portions after adequate brining.

The most popular preparation in America is “Rocky Mountain Oysters.” Using your favorite frying method, slice the “oysters” thinly, batter, and fry them in hot oil until golden brown. Accompany them with a dab of horseradish.

The texture and taste of testicles are reminiscent of bacon, making them a great substitute in a hearty stew or pasta dish. Generational Wyoming rancher Casey Manning fondly recalls his mother making testicle stroganoff after the spring harvest.

Steven Rinella poaches game testicles in butter. This is a quick and approachable technique that allows hunters to make an offbeat appetizer before a crowd-pleasing entrée.

“If you can say it was something it wasn’t, and I don’t know what that would be, they would love it until they found out what you were giving them,” Rinella said of serving nuts to non-hunters.

A Thinking Man’s Cut The life of a cowboy or sheepherder has often been romanticized by the media, but it’s truly a lifestyle of hardship. And a hard truth is that much of the world, including cowboys, don’t have the privilege to overlook edible meat.

Those who find culture fascinating and those who care to use the entire animal should take pride in eating what others laugh at. Cooking up a pair of nuts, no matter the animal, is a way to pay homage to tougher people that branded the West as we know it.

A Scottish breakfast typically includes eggs, beans, bread, and, if you’re lucky, some tomato. It’s a simple dish (some might say boring) that doesn’t reflect the rich history of castles, whiskey distilleries, and regal stags associated with Scottish culture. But redemption for this tired dish sits on the edge of the plate as a slice of blood sausage. Known as black pudding to the Brits, this semi-sweet, iron-y delicacy had me questioning my own...

Adam Crockett lay death-still and unblinking as a doctor pushed a needle into his right eyeball and withdrew built-up fluid. With that task complete, the doctor at the Cole Eye Institute in Cleveland pushed a second needle deep into the back of Crockett’s eye, all the way to the retina. Stopping just short of the optic nerve, he injected a steroid. After emptying the syringe and withdrawing the needle, the doctor grabbed a third needle, directed...

What You Need to Know About Aging Game Meat

Meat is aged for two reasons, to tenderize it and to enhance flavor.  When possible, this should be done with the hide on and the bone in.  The hide protects the meat and prevents excessive drying. The bone keeps the muscles elongated, which helps prevent contraction and subsequent toughness. Aging meat properly requires a period of 7-14 days, depending on the condition of the animal. Ideal temperatures for aging are between 34-37 degrees.  This...