How to Predict Weather with Bear Grease

You can make bear grease by heating the lard off a bear until it liquifies into a usable oil. It’s highly valued because of its stable shelf life at room temperature and numerous applications. I’ve personally cooked, conditioned leather, lubricated metal, and made lye soap with it. Other folks use it as hair pomade, lamp fuel, and bug repellent. I gave a jar to a bowyer once for sealing bow wood. It was valued in frontier America because it didn’t go rancid as quickly as pork lard and was readily available.

There’s also a healthy dose of bear grease folklore among those in the know. They say it can cure baldness and relieve arthritis pain by rubbing it on aching joints. However, the most unique belief is that it can be used to forecast weather and other natural events by interpreting its mysterious formations.

Gordon Wimsatt of New Mexico was the man who made bear grease famous in modern times. In the 1930s he learned that Native tribes of the Southwest stored bear grease in deer bladders, which became almost transparent when scrapped and dried. By observing the nuanced day-to-day changes in the oil, these Natives believed they could predict the weather.

Wimsatt observed bear grease for 60 years, taking detailed notes related to meteorological changes and concurrent shapes in his grease. He gained notoriety by accurately predicting weather and other natural events. In 1986, Wimsatt went on “Good Morning America” after he predicted an earthquake in Mexico.

Wimsatt wasn’t a bear hunter himself, but he maintained up to 100 jars of bear grease in his home. He believed that placing them in a south- or west-facing window was best for weather prediction. He noted that bear grease often comes in different colors, and the lighter-colored oil was best for predicting weather, presumably because you could see it better.

After many years of rendering bear fat myself, I’ve noted the differences in individual batches. I’ve experimented with temperature and cooking times. The hotter you cook it, the darker the oil. “Slow and low” is the best practice for rendering weather-predicting bear fat. The most unique thing about bear grease is that it varies in consistency at room temperature and always separates into two sections. A thick, whitish layer collects at the bottom, and a clear, amber liquid forms at the top. This intersection is where the magic happens.

Every batch of bear grease varies in the percentage of solid and liquid portions and I’ve yet to find an explanation why. Some bear grease is almost 100% solid while other batches produce two-thirds liquid. The amount of solid and liquid doesn’t affect the taste or usability because it all turns into liquid oil when heated or applied on something. To clarify, it’s not truly “solid” but an opaque, runny, and creamy white compared to the amber-colored top section, which can be the color of apple juice or even honey.

Wimsatt made a chart with 18 different correlations he observed between weather events and bear grease. The chart includes patterns that indicate atomic explosions and volcanic eruptions. It may sound like hocus pocus, but I’ve personally been paying attention to bear grease for the last 10 years, and I’ll be the first to admit that it’s a game of nuance. 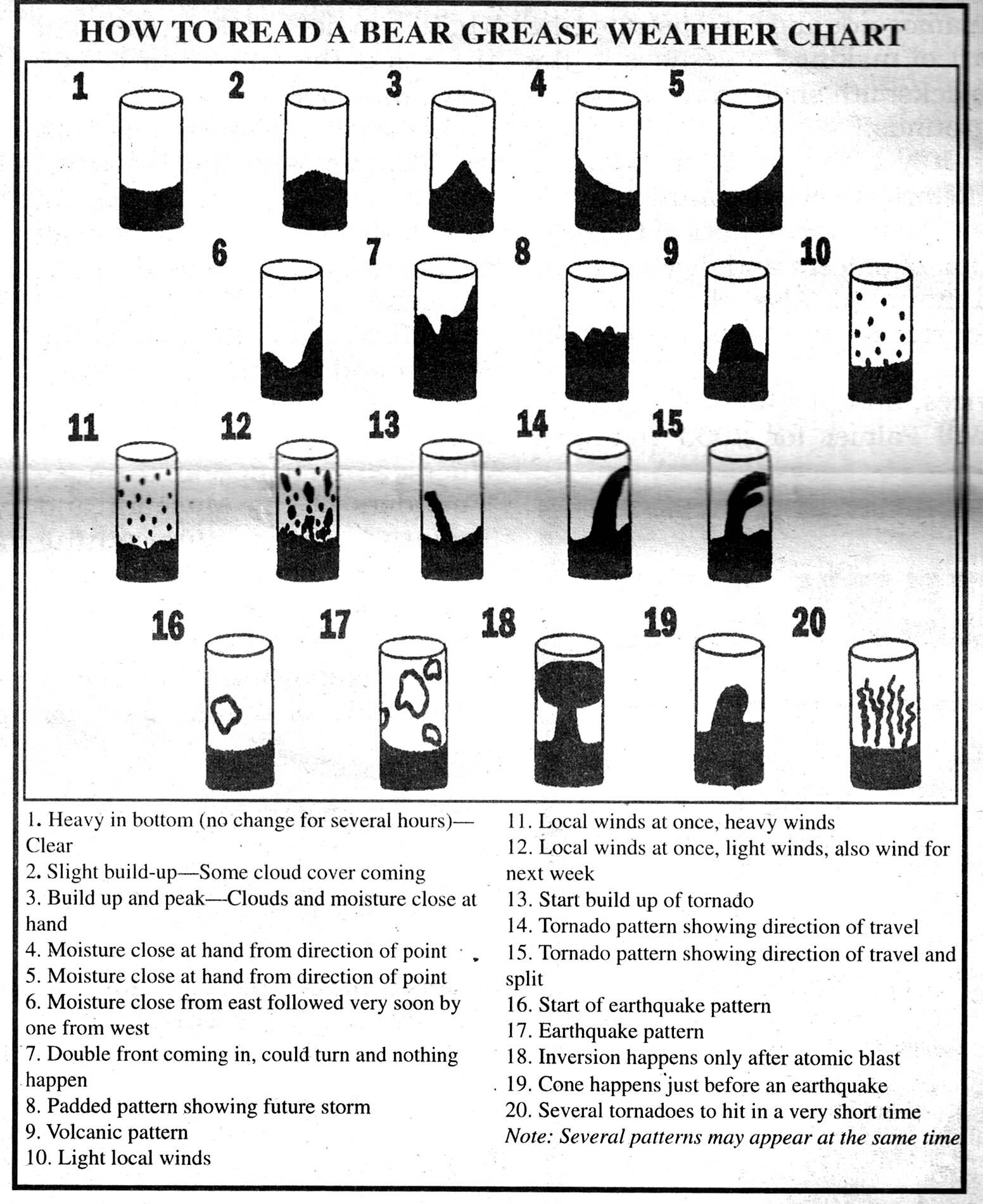 “The dude was probably picking up on the barometric pressure,” Steve Rinella said when I first told him about predicting weather with bear fat.

He’s probably right. I’ll say that the bear fat certainly changes with temperature as all animal-fat oils do. Obviously, at higher temperatures it becomes more liquid and translucent. When chilled, it becomes more solid and opaque. The real change comes at the point of separation between the solid sections and the liquid sections. This part changes in mysterious ways, forming cloud-like shapes with varying densities, which is where the weather forecasts come from. If you’re paying attention, you may notice some stunning shapes and formations.

Wimsatt’s hand-drawn chart shows each of the bear grease formations with a corresponding sketch. I wish I could say that I’ve seen them all play out, but I haven’t. I’m a firm believer that humans of the past, specifically the indigenous peoples who first used this method, were paying more attention to the natural world than people do today. They searched their environment for correlations and connections that would help them survive and thrive. I believe there is some truth to what Wimsatt noted about the bear grease, and you can bet I’m going to be paying closer attention in the coming years because I don’t trust weathermen and I doubt Wimsatt did either.

How to Make Bear Grease

The practice of making bear oil has diminished over the last century. Cheap, grain-based oils and our society’s rapid movement away from field-to-table eating has lessened the value of this wonderful, multipurpose fat. But I think it still can find a place in modern homes. Bear oil has many non-cooking functions like lubricating guns and knives, preserving leather, burning as fuel in oil lamps, and in some circles, forecasting the weather. Bear...

Making bear grease lye soap is a practice as old as the hills. It's a time-tested and valued cleaning product to this day. As a matter of fact, you can use any type of animal tallow to make soap, as people commonly did before modern commercial soaps. In this video I'll show you how to use four ingredients: bear grease, lye (sodium hydroxide), water, and essential oils. Animal tallow soap makes a great lather and is better for your skin than the...

A Scottish breakfast typically includes eggs, beans, bread, and, if you’re lucky, some tomato. It’s a simple dish (some might say boring) that doesn’t reflect the rich history of castles, whiskey distilleries, and regal stags associated with Scottish culture. But redemption for this tired dish sits on the edge of the plate as a slice of blood sausage. Known as black pudding to the Brits, this semi-sweet, iron-y delicacy had me questioning my own...