How to Make Bear Grease

The practice of making bear oil has diminished over the last century. Cheap, grain-based oils and our society’s rapid movement away from field-to-table eating has lessened the value of this wonderful, multipurpose fat. But I think it still can find a place in modern homes.

Bear oil has many non-cooking functions like lubricating guns and knives, preserving leather, burning as fuel in oil lamps, and in some circles, forecasting the weather. Bear oil doesn’t go rancid as quickly as pork lard and can be used for any type of cooking application. In my book, it’s the best oil for frying, as well as a great product for making pastries, cookies, and pie crusts. Here’s how you can render your own bear fat this spring.

Harvesting the Bear Fat
Let’s start out with a hypothetical situation. You just killed a big ol’ black bear and are now standing over its 300-pound carcass. After a fist pump and reflective moment of reverence, you ask yourself: What now?

In the fall, bears will have substantial amounts of whitish fat in between the hide and muscle. They usually have less fat in spring but it’s still worth harvesting. After caping the hide off the bruin, use a sharp knife to fillet off chunks of fat, making sure to not get any meat mixed in with it. You’ll find most of the largest reserves of fat will be around the rump of the bear.

You’ll want to get the fat cooled down as quickly as possible, just like the meat you’re taking home. It’s perfectly acceptable to freeze the fat for later usage, or you can render it while fresh. I prefer to freeze the fat in multiple layers of big chunks to reduce the potential for freezer burn. It’s best to use it within six months of freezing. 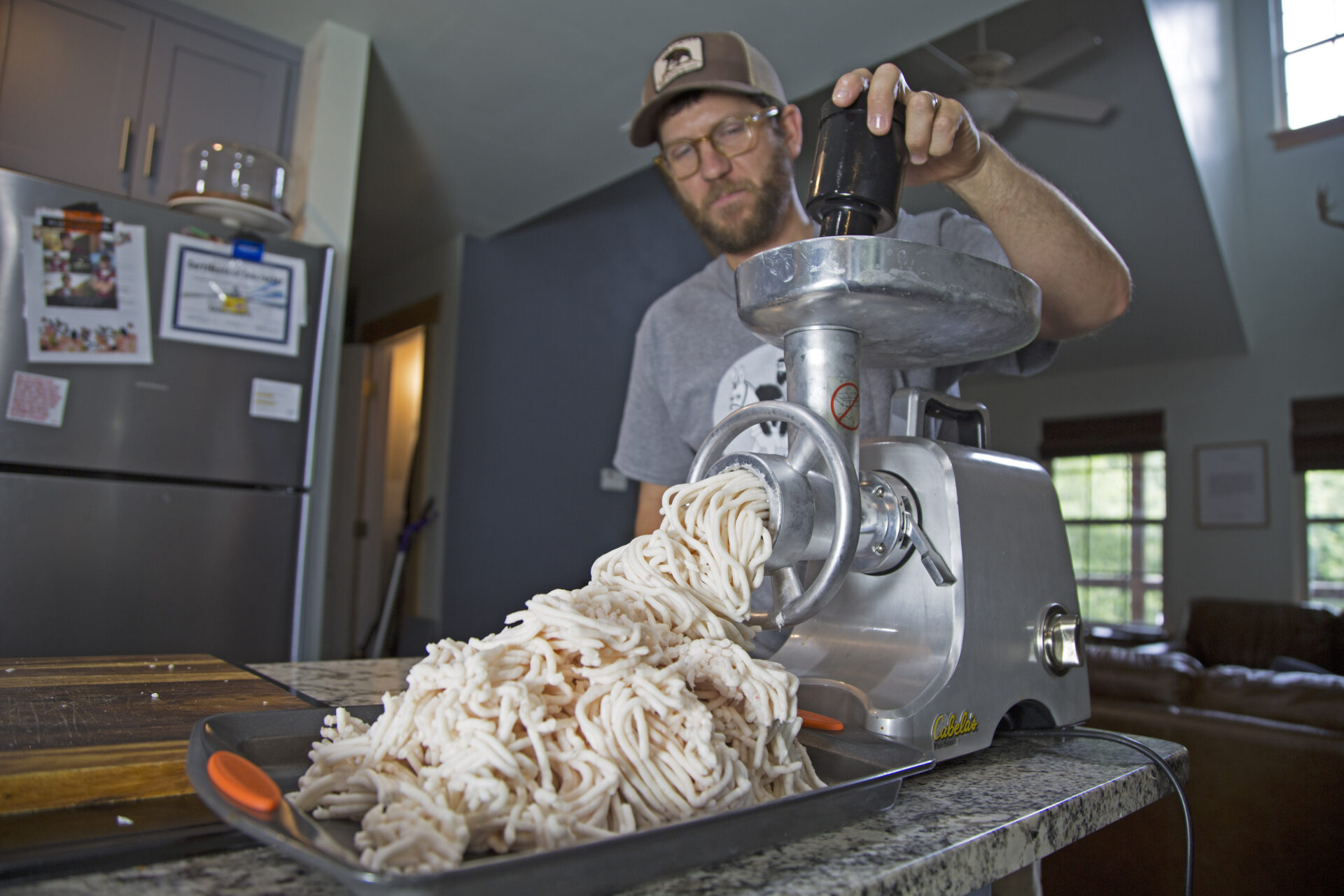 Preparing the Bear Fat
I prefer to freeze the fat immediately, but let it thaw about halfway before cubing it into 1-inch pieces. When bear fat is at room temperature, it’s greasy and could be likened to cutting a block of Jell-O. By cutting the fat when it’s just above freezing, it slices more easily, similar to working with a piece of fudge.

At this point you can start the rendering process with the cubes, but it’s best to grind the fat beforehand—you waste less and get more oil by rendering ground fat. Run the chunks through a standard meat grinder with chilled parts. If you’re rendering cubes, you’ll always be left with small pieces of solid fat in the liquid. These are referred to as “cracklings.” They can be salted and eaten warm, or even used as dog treats. So, grinding gets a higher yield, but chunking results in cracklings. It’s your

Rendering the Bear Fat
“Low and slow” (with lots of stirring) is the name of the game when rendering lard. I prefer to cook it at 225 degrees, but some folks go up to 300. The hotter you cook, the quicker it’ll render and the darker the oil will be. The slower you cook, the longer it’ll take and the clearer the oil will be. Despite what some say, oil color doesn’t change the taste.

At 225 degrees, you can render down a pound of bear fat in about 25 minutes. I’ve also rendered fat at 315 degrees in a Jetboil and a Fry Daddy, and it liquefied within about 8 minutes. I prefer to use a propane heat source and an aluminum cooking pot (like a turkey cooker), but you can use a common cooking pot from your kitchen on a stove top.

You’ll want to leave the oil on the heat source until 90% of all solids are gone. I’ve found that a pound of bear fat will produce one pint of bear oil using the grinding method, and slightly less if you’re cubing it. 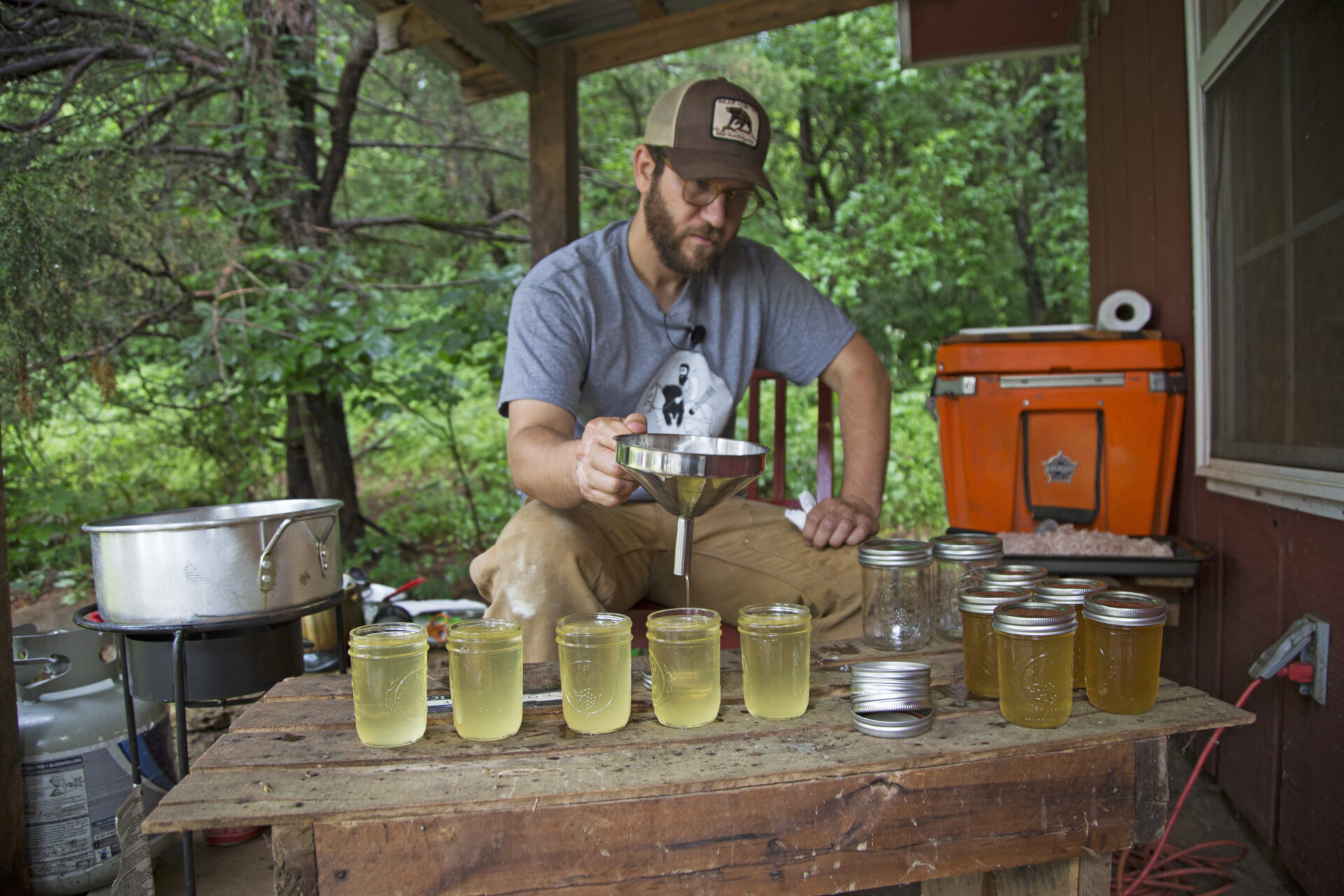 Storing the Bear Grease
The final step of the process will be pouring the oil into jars for storage. I use common canning jars (or Mason jars) that are found at most grocery stores. I like to store the oil in half-pint jars, as I’ve found this is a usable portion size. The full pint jars are pretty big and it’s hard to use all the oil at once.

Using a metal cooking funnel and cheesecloth to strain, pour the oil into the jars. I like to double and even triple fold the cheesecloth to make sure any solid matter is kept out. If you don’t do this, small, burned particles of tissue will make it into the final product. The oil will be extremely hot so be careful. I usually let the oil cool down for about 10 minutes with the lid off of the jars, then put the lid on while it’s still warm.

The fat will be a beautiful amber color when hot, and gradually turn into a pearly white solid state at room temperature. As the fat settles over weeks and months, it will separate into an almost clear liquid at the top with white lard at the bottom. Stir or shake the jar before use.

You’ll find this oil to be almost tasteless, which makes it so easy to work with in the kitchen. There’s an unlimited amount of applications for rendered bear oil, so don’t be afraid to experiment. My favorite use for bear grease is as a unique gift to family and friends—something only a hunter can provide.

Bear grease has many uses, and making beard oil is one more fantastic way to utilize the multipurpose fat. Beard oil has become very trendy in recent years and is often for sale in hardware stores, gas stations, and grocery stores. But why purchase it when you can make your own? This recipe is simple. You'll combine equal parts bear grease, almond oil, and jojoba oil to make the base. You can easily order the almond and jojoba oil online. As for...

How to Predict Weather with Bear Grease

You can make bear grease by heating the lard off a bear until it liquifies into a usable oil. It’s highly valued because of its stable shelf life at room temperature and numerous applications. I’ve personally cooked, conditioned leather, lubricated metal, and made lye soap with it. Other folks use it as hair pomade, lamp fuel, and bug repellent. I gave a jar to a bowyer once for sealing bow wood. It was valued in frontier America because it didn...

The search for the perfect bear grease biscuit recipe ends here, folks. Smash your biscuits together if you don’t want the sides crispy or spread them out if you do. Bake them for 12 minutes if you like them just barely cooked like me, or leave them in a little longer if you like your biscuits well-browned. Eat them up with some homemade jelly or jam or just slather them in butter when they’re hot out of the pan. Either way, you might want to...