How to Determine the Age of Snow Geese

There are loads of misconceptions around cooking snow geese, which can make using them in the kitchen feel like a daunting and confusing task.

Numerous variables play a role in defining their palatability, but one of the most helpful tips I can give for cooking geese is to make sure you determine the age first. This information will help you decide which cooking method is best for your bird.

It’s a shame that snow geese get such a bad rap. I imagine that it has a lot to do with the expectation that old geese and young geese will taste the same. In reality, an old goose will be tougher than a juvenile, and thus they should be prepared differently. 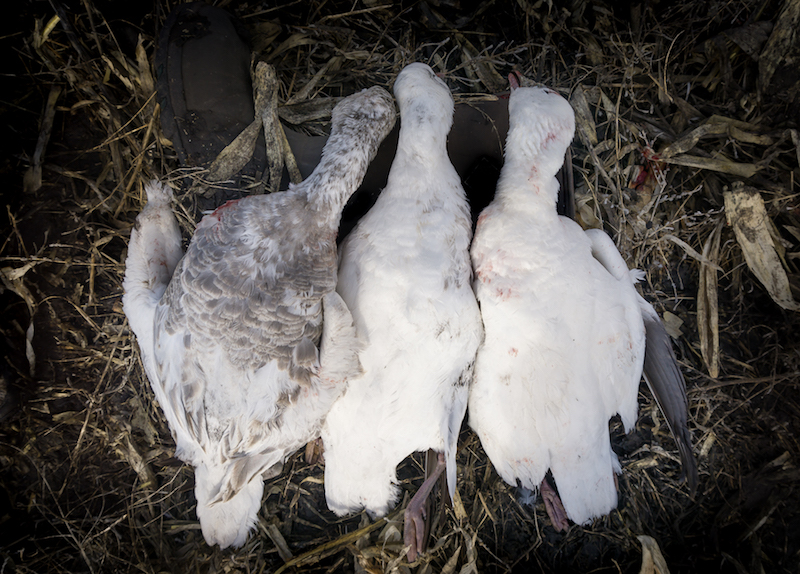 I find that juvenile snows, and most Ross’ geese, are much more tender than mature adults. I treat the delicious breast meat of these birds as I would a steak. It’s important that they are not overcooked so that the meat doesn’t dry out. I like to cook them in a sauté pan, over an open flame or with a sous vide device.

Snow geese can live up to 20 years, which explains why an older bird can be so damn tough. That doesn’t mean they’re inedible, though.

Hanging birds by their necks for several days can make a dramatic difference for the meat, but you need to keep the temperature between 45 and 60 degrees. It’s an aging method where enzymes start to break down the connective tissue, much the same reason you would hang a deer in your garage before butchering. If hanging isn’t an option, one useful method is to slowly braise the breasts and legs over low heat until fork tender.

Determining the age of a snow goose is easy if you know what to look for. 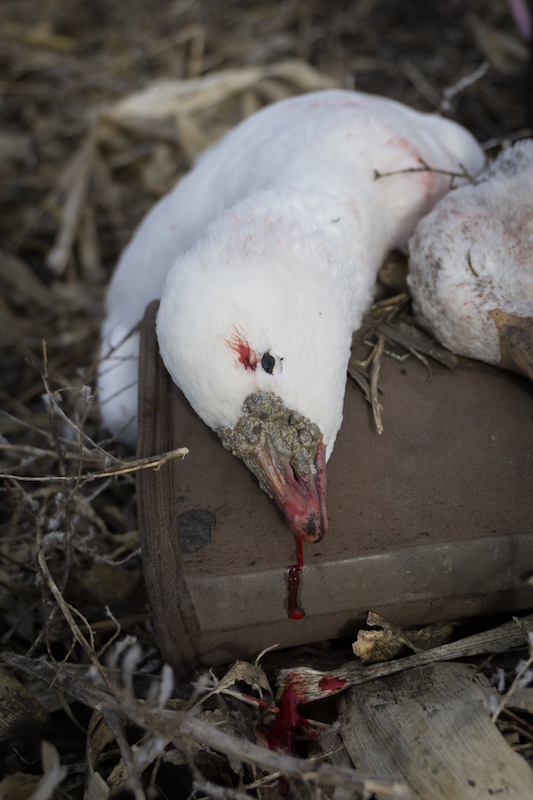 For starters, check out their feathers. “Dirty bird” is the slang term for a juvenile white-phase snow goose. These young geese are dingy looking with a mix of gray and white feathers in their first year. Their bodies will turn solid white when they get their adult plumage. However, this is not to be confused with blue-phase snows, a different variation of the lesser snow goose.

The feathers of a young, blue-phase goose will appear more mottled and less defined, but overall they’re a much darker shade of grey and brown. As these birds age, their heads will become a striking white.

Next, look at the bill. An immature snow goose will have a gray-pink bill, while an adult’s will be pink with a prominent patch of black. It causes adults to look as though they’re constantly smirking.

One really cool feature about Ross’ geese is that they can start to grow some pretty gnarly formations on their bills that become more prominent as they age.

Legs are another way you can determine age. The color of a young snow goose’s legs tends to be a grayish-yellow with soft webbing between their feet. Older bird’s feet will turn pink and feel more rigid.

So, the next time you have a successful goose hunt, take a moment to look over your birds to get a rough estimate on the age before butchering. When you start processing, be sure to bag the young birds and old birds separately so there aren’t any surprises when you’re ready to cook.

What Is Koji Aging and Does It Work?

If you keep up with the trends in culinary culture, there is a good chance you’ve come across some mention of koji-aged meat. The widespread claim is that in three days you can recreate the flavors of meat that has been dry-aged for 45 days. I wanted to challenge that statement by testing it on wild game. I took some venison backstrap and rubbed it with koji for 72 hours to determine if this aging hack lives up to the hype. In English, koji is...

What You Need to Know About Aging Game Meat

Meat is aged for two reasons, to tenderize it and to enhance flavor.  When possible, this should be done with the hide on and the bone in.  The hide protects the meat and prevents excessive drying. The bone keeps the muscles elongated, which helps prevent contraction and subsequent toughness. Aging meat properly requires a period of 7-14 days, depending on the condition of the animal. Ideal temperatures for aging are between 34-37 degrees.  This...