There’s a difference between book smart and bar smart. You may not be book smart, but this series can make you seem educated and interesting from a barstool. So, belly up, pour yourself a glass of something good, and take mental notes as we look at the tallest wave known to man.

On July 9, 1958, at 10:15 p.m., an earthquake near Alaska’s Lituya Bay triggered a massive rockslide that created the largest wave ever documented. That record measurement wasn’t some rough estimate either; the megatsunami wiped trees off a mountainside up to 1,720 feet above sea level, leaving an indelible mark of destruction still visible 63 years later, reminding visitors of the lives lost that night.

Lituya Bay isn’t close to much for way of reference. If you’re looking at a map, find the point where the Yukon Territory Border comes closest to the coast and makes a hard corner that roughly divides the Southeast Alaska panhandle from the mainland body of the state. This stretch of uninhabited wilderness is known colloquially as the “Lost Coast,” and for good reason. Lituya is on the other side of the 15,300-foot Mount Fairweather and its eponymous peninsula from the picturesque Glacier Bay, about 100 miles by sea from Hoonah and Gustavus to the southeast and another 100 or so from Yakutat to the northwest. 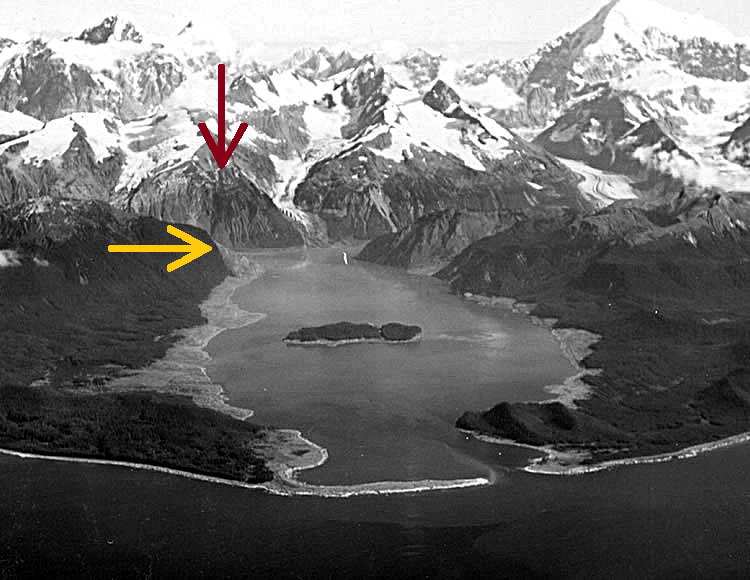 That intermediacy between those remote human settlements, as well as its convenient shape, makes Lituya Bay an attractive anchorage for vessels traversing the Lost Coast. The 7-mile-long, 2-mile-wide fjord, fed by two glaciers and punctuated by Cenotaph Island, constricts to only 500 yards at the entrance, creating a safe harbor for ships to shelter from storms on the open Gulf of Alaska. Safe, that is, until the waves start coming from the mountains.

Three boats were anchored in the bay that clear evening of 1958 under the midnight sun: the F/Vs Edrie, Badger, and Sunmore—all trollers out of Juneau. The first two rode out the tsunami, leaving their crews to tell the tale. The Sunmore didn’t.

Bill and Vivian Swanson were among the survivors. They were asleep on the Badger when the earthquake hit.

“With the first jolt, I tumbled out of the bunk and looked toward the head of the bay where all the noise was coming from,” Bill recounted to Alaska Sportsman Magazine shortly after.

“The mountains were shaking something awful, with slide of rock and snow, but what I noticed mostly was the glacier, the north glacier, the one they call Lituya Glacier. I know you can’t ordinarily see that glacier from where I was anchored. People shake their heads when I tell them I saw it that night. I can’t help it if they don’t believe me. I know the glacier is hidden by the point when you’re in Anchorage Cove, but I know what I saw that night, too. The glacier had risen in the air and moved forward so it was in sight. It must have risen several hundred feet. I don’t mean it was just hanging in the air. It seems to be solid, but it was jumping and shaking like crazy. Big chunks of ice were falling off the face of it and down into the water. That was 6 miles away and they still looked like big chunks. They came off the glacier like a big load of rocks spilling out of a dump truck. That went on for a little while—it’s hard to tell just how long—and then suddenly the glacier dropped back out of sight and there was a big wall of water going over the point. The wave started for us right after that and I was too busy to tell what else was happening up there.”

The Badger lifted on the wave, which carried the vessel up and over the top of La Chaussee Spit at the entrance of the bay. Bill claimed that he looked down to see the tops of spruce trees some 80 feet below him. The wave crest broke outside the bay, dropping the boat and smashing it to pieces. It began to sink. The Swansons, injured and wearing only underclothes, managed to board their skiff and were rescued two hours later by the vessel Lumen, responding to a mayday signal from the Edrie.

Howard Ulrich, captain of the Edrie, did not expect that he and his 8-year-old son would survive. He tried to pull anchor when he saw the giant wave break over Cenotaph Island but the flukes were snagged. He let out the remainder of the chain, strapped a life jacket on his son, swung his bow into the tsunami, and radioed a distress signal he hoped would ultimately reach his wife as they were engulfed:

“Mayday! Mayday! This is the Edrie in in Lituya Bay. All hell has broken loose in here. I think we've had it. Goodbye."

The anchor chain snapped as the boat rose toward the crest of the wave and Ulrich was able to steer clear of the debris down the back side to safety.

The crew of the Sunmore responded faster than those of their companion vessels, but that proved to be a fatal error. Brothers Orville and Mickey Wagner immediately pulled anchor and ran for the entrance of the bay toward open water. Bill Swanson reported seeing the Sunmore caught stern-first and tossed over Harbor Point on the south side of the entrance. Rescue crews found nothing but an oil slick where the vessel sank in deep water.

Geologists have offered several models to explain the events that occurred that night. One study published in The International Journal of The Tsunami Society in 2002 concluded, as others have, that an 8.3-magnitude slip-strike earthquake centered 45 miles south of Lituya along the Fairweather Fault set off the chain reaction. The two-minute tremor was so strong that people felt it from Anchorage to Seattle, according to SITNews in Ketchikan. Three berry pickers on a small island near Yakutat died when the island disappeared. A nearby mountain rose 55 feet and most of the land shifted 21 feet horizontally, reported Don Miller, a geologist who was in Glacier Bay during the quake and flew to Lituya the next day to assess the scene.

That area frequently receives more than 300 inches of rain per year and that spring had been an especially wet one. According to Miller’s official report in 1960, the earthquake released a 2,000-foot, saturated mountainside at the head of the bay, sending 40 million cubic yards of rock and soil, estimated to weigh 90 million tons, into the water. That in turn broke free an even larger volume of ice from the Lituya Glacier. More recent analyses indicate that the depth of water where the slide hit, more than 800 feet deep, played a major role in producing the wave that reached more than a quarter mile tall.

That tsunami was not the first treacherous event to happen in that location. Cenotaph Island bears its name for the 20 French sailors on the Lapérouse Expedition who drowned there in 1786. Geologists have found evidence of massive waves occurred in the bay in 1853, 1874, and 1936. Lituya's long, narrow shape with giant mountains and glaciers at the head, as well as its location right on a major tectonic fault make it exceptionally prone to tsunamis. Phillip Fradkin, author of a 2001 book on the subject, wrote that the native Tlingit oral tradition speaks of big waves there that led to mass drowning of tribal members.

The Lituya Bay Tsunami haunted its survivors for the rest of their lives. Ulrich was still writing about it 46 years later. Vivian Swanson reported that her hair turned gray after that night and she never boarded a boat again. Her husband, Bill, returned to Lituya Bay on May 26, 1962. As he passed through the entrance and around the spit he’d been tossed over like driftwood, he suffered a massive heart attack and died.

The EPA Wants Your Input on Permanently Protecting Bristol Bay

On May 25, the Environmental Protection Agency released a plan that would effectively prohibit the development of the controversial Pebble Mine in Alaska’s Bristol Bay region. The proposed determination, under force of the 1972 Clean Water Act, would bar the Canadian mining conglomerate seeking to build the mine from using certain waterways for disposal of dredged materials associated with their planned extraction of gold, copper, molybdenum, and...

The Environmental Protection Agency (EPA) issued a final rule this week preemptively blocking the controversial Pebble Mine in Alaska’s Bristol Bay. The agency has only used this veto authority 13 other times since 1980, and conservationists are hopeful the ruling will be durable enough to withstand inevitable lawsuits and future presidential administrations. For now, the coalition of hunters, anglers, commercial fishermen, tribal members, and...