The footprints, which were discovered in the salt flats of the Air Force’s Utah Testing and Training Range, are believed to have been created by humans walking along the muddy riverbed near the end of the last ice age. In total, 88 prints of both adults and children were located.

These “ghost footprints” get their name from their vanishing-and-reappearing nature. The footprints are only visible for a short time after a rain when they fill with moisture and saturate with color. Once dried, they disappear again. 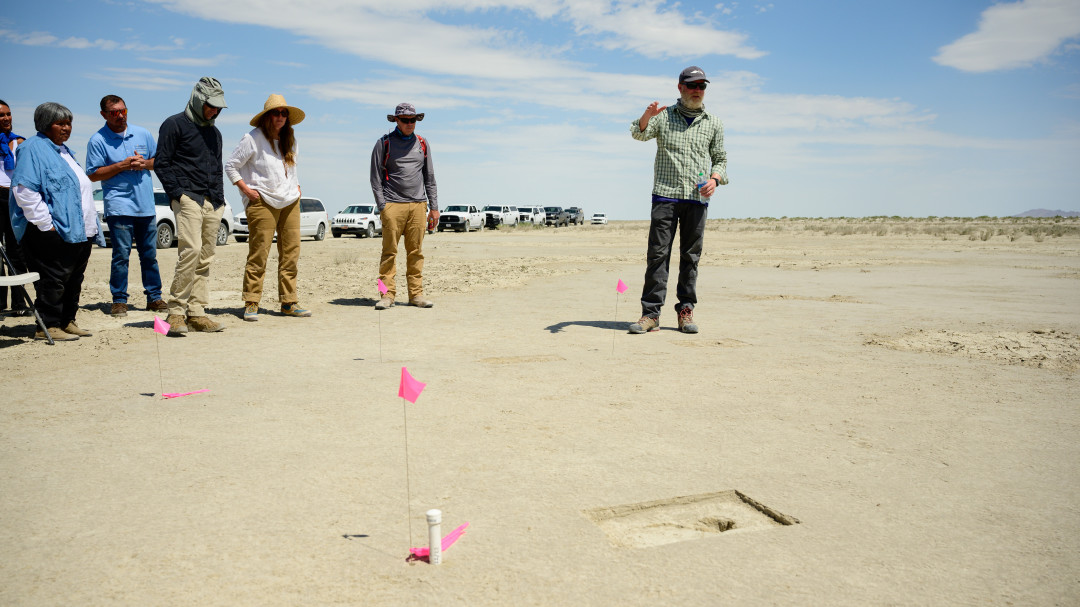 This unique discovery happened by chance, according to Dr. Daron Duke and Dr. Tommy Urban, the archeologists who found the footprints.

Urban, a research scientist at Cornell University, was in Utah to assist Duke, a Nevada-based archaeologist for the Far Western Anthropological Research Group, with searching for evidence of ancient campfires.

The two were engaged in a lively discussion about ancient tracks while driving across the salt flats to another dig site, Urban told The New York Times, when he noticed them out the window.

“When I spotted them from the moving vehicle, I didn’t know they were human,” Urban said. “I did know they were footprints, however, because they were in an evenly spaced, alternating sequence—a track pattern.”

This site is now one of only two known locations in the United States where these ancient “ghost footprints” have been discovered. This discovery follows a similar one Urban was involved with of ancient human and other mammal tracks at White Sands National Park in New Mexico. There, the Pleistocene-Age human footprints, date between 21,000 and 23,000 years. 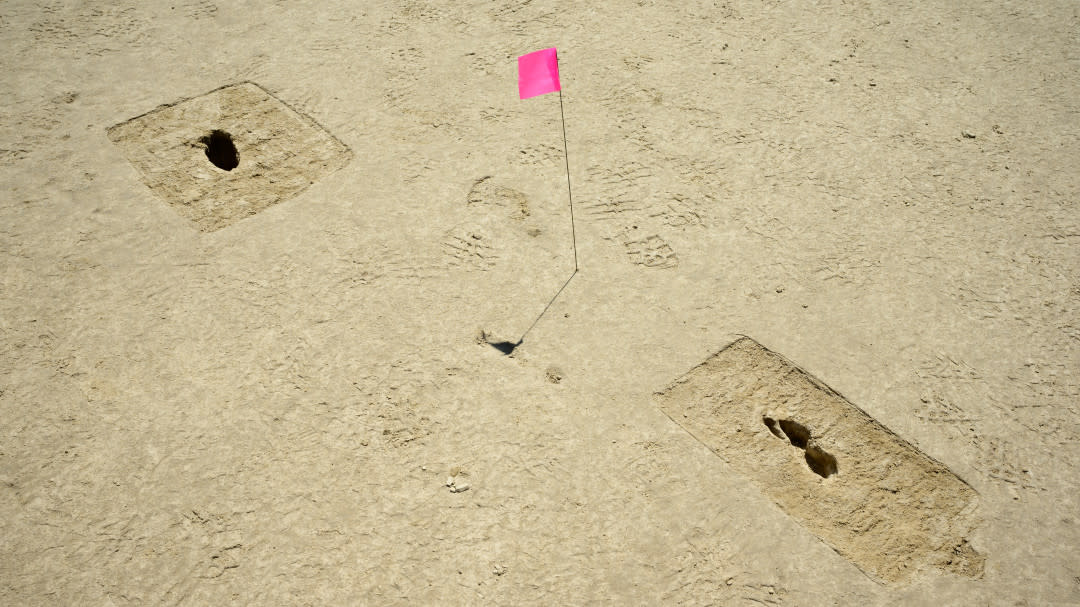 These discoveries reveal a lot about early humans in North America, including not just where they lived, but also information about their habits and behaviors. In New Mexico, the tracks held proof that ancient humans walked in the footprints of enormous proboscideans and vice versa; that one human raced across the mud holding a child, put that child down at one point, picked that child back up and then rushed off to an unknown destination; that at least one giant ground sloth was followed by ancient humans, rose up on its hind legs and twirled as the humans surrounded it; that children played in puddles.

At the discovery location in Utah, Urban, Duke, and their team returned the next day to excavate the tracks and study the surrounding site.

“Based on excavations of several prints, we’ve found evidence of adults with children from about five to 12 years of age that were leaving bare footprints,” Duke said in an Air Force press release. “People appear to have been walking in shallow water, the sand rapidly infilling their print behind them—much as you might experience on a beach—but under the sand was a layer of mud that kept the print intact after infilling.”

"We have long wondered whether other sites like White Sands were out there and whether ground-penetrating radar would be effective for imaging footprints at locations other than White Sands, since it was a very novel application of the technology," Urban told MSN. "The answer to both questions is 'yes.'"

All images via the U.S. Air Force/R. Nial Bradshaw.

A New Study Will Change the Way We View Human Evolution

A new study out of South Africa could rewrite certain aspects of humankind’s evolutionary origin story. The study hinges on an innovative fossil aging technique called cosmogenic nuclide dating. It shows that the fossil record of an early human-like hominid called Australopithecus africanus stretches back 3.8 million years, making the species one million years older than previously thought. The findings, published in the journal PNAS, are...

The Mystery of America's Stonehenge

If you’re driving through the rocky ridges of southeastern New Hampshire and see a sign for “America’s Stonehenge,” don’t expect a peek into North America’s hitherto-unknown megalithic past. America’s Stonehenge is more a modern nickname for an intriguing New England sightseeing attraction than the doppelgänger of England’s iconic and prehistoric Stonehenge monuments. No one visiting either historical site will confuse it for the other. The...

How Early Hunters Ran Down Deer on Foot

I jogged two miles this morning. I’m not bragging—deep down inside I know my hunting predecessors must be terribly ashamed of me. My knees hurt. My back ached. My shins burned. I couldn’t imagine running down and killing an energetic tortoise on foot, let alone a healthy antelope or deer. But according to many word-of-mouth accounts and a growing mound of anthropological evidence, that’s exactly what some hunters did for thousands of years. “In...