In the first episode, Steve purchases Das Boat out of a backyard in central Texas then takes it to a local fabricator and spends a day trying to make sure it’ll float. He and Texas fishing icon, JT Van Zandt chase redfish down on the coast, taking Das Boat into skinny saltwater it’s definitely never seen before. They end the day in JT’s kitchen cooking up a spread of blackened redfish tacos and sipping a little tequila. Along the way they discuss tribalism, the benefits of artificial lures vs. dead bait, the serviceability of redfish flesh, and the closest thing to a chicken thigh you can find on a fish.

After a successful trip on the Texas coast, JT and Steve send Das Boat up to Austin to do a little urban angling. In this episode, Austin based fishing guide Alvin Dedeaux and James Beard Award winning chef Jesse Griffiths test out Das Boat’s river capabilities on the Lower Colorado. They target Guadalupe bass on topwater lures and try to find a way to land a prehistoric gar. Along the way they discuss playing in club bands, fishing near cities, eating bass, and the secret berry that helped monks stay . . . monkly.

S1-E06: Frank and Rob Are Back on the Savannah River Huntin' Catfish and Gar

Long river trips can take us deep into some wild places aboard a vessel that will carry far more than the basic necessities. In the season finale of Das Boat, Mustache Rob and Frank are back on the Savannah River in Georgia, headed more than 50 miles downstream into water that neither of them have ever seen before. It’s an exploratory mission, of sorts, though the Savannah is far from wilderness, and Rob and Frank’s journey is more National Lampoon than Heart of Darkness. At the terminus of their trip waits Wade Plantation and some heaping platefuls of southern hospitality. All Rob and Frank have to do is bring some catfish for the table and safely pilot Das Boat downstream.

Lake Okeechobee—Florida’s inland sea of freshwater, grass, and largemouth bass. This week, Das Boat dives deep into Florida’s watery heart with a Candian and a Californian. The host of our own Anchored podcast, April Vokey, meets up with big bass expert Oliver Ngy and they try to figure out one of the most notoriously complex and rewarding bass fisheries in the country. Along the way, they discuss the iconography of Okeechobee, America’s obsession with bass, glitter boats, and the founders of Captains for Clean Water explain what’s being done about Florida’s water quality problems.

Steven Rinella takes to the canyons of the West Texas desert in search of javelina. In this broken, rocky terrain finding these unique critters isn't easy and getting a clear shot on a skunk pig with a bow is a whole other story. But Steve is inspired by the evidence of he finds of ancient hunters that used the area to prepare a meal that honors both the animal and our hunting ancestors. Presented by onX Hunt. Use code MeatEater for 20% off the Hunt App at www.onxmaps.com/hunt

On the first episode of MeatEater Hunts, Steven Rinella and Janis Putelis head to California for a spearfishing trip with expert skin divers Greg Fonts and Alex Reynaud. After learning the ropes, the guys head off in search of fresh sushi and fish tacos. They hunt the reefs and kelp forest looking for yellowtail while filling up the stringer with sheepshead, bonito, and calico bass. The underwater scenery is so mesmerizing and the fish so damn delicious that it leaves Steve wondering what he’s been doing chasing elk for the last 20 years.

Steven Rinella heads into the mountainous desert backcountry of west Texas after Barbary sheep, or Aoudad. These introduced sheep from North Africa are hard to find and harder to hunt. Challenged by the harsh environment, rugged terrain, and elusive sheep, Steve finds this hunt to be one of the most difficult he has ever undertaken. Presented by onX Hunt. Use code MeatEater for 20% off the Hunt App at www.onxmaps.com/hunt

MeatEater's Senior Hunting Editor Brody Henderson heads south to hunt feral pigs with his good friend Alvin Dedeaux. The guys start their trip with a visit to the YETI Flagship Store in downtown Austin, Texas to speak at a Backcountry Hunters and Anglers event. After their short trip to the city, it's time to start looking for hogs on a local ranch. Alvin is a long-time fishing guide who just recently completed his hunter safety course, while Brody has been hunting his whole life. An experienced non-local guiding an inexperienced local is not an optimal situation, but time spent with a good friend exploring a new part of the country sounds like a recipe for a damn good time to us.

In the first episode of Season 2, Steve introduces you to the new Das Boat—Dos Boat. After a bumpy start, Steve gets to South Haven, MI, where he recruits the help of local charter captain Grant Gulley. Steve, Grant, and a local fabricator put in 10 hours of work getting the boat ready to fish for lake trout in 100 feet of water. With good reason, Grant is somewhat skeptical about the 14 foot, 50-year-old boat’s ability to handle the big water of Lake Michigan. Luckily, the conditions are perfect allowing them to deep water troll for the native char better known as lake trout. Along the way, they discuss Jon Gary—Steve’s fishing mentor and the original captain of Dos Boat—the young anglers Jon influenced, the decline (and comeback) of the lake trout, and a whole lot more. They might even catch some fish.

Dos Boat heads west to meet up with Oliver Ngy and Kevin Harlander in North Central Wisconsin. Oliver and Kevin are here for two things: big musky and delicious panfish. These targets represent opposite poles of the fishing spectrum: Musky (also known as muskellunge) are one of the largest, most difficult freshwater fish in North America. They are a coveted prize for dedicated fisherfolk. Panfish, on the other hand, are seen as entry-level—too small, abundant, and easy to fool to merit the attention of “serious anglers.” Oliver and Kevin show that fishing is fun, plain and simple, no matter how serious or laid back you want to make it. Before hitting the water, they give Das Boat a serious lake fishing upgrade with state-of-the-art electronics and a powerful trolling motor. They also convert a cooler into a livewell to keep bait and fish alive. Along the way they discuss whether or not it really takes 10,000 casts to catch a musky, losing the fish of a lifetime right at the boat, the figure 8, how bluegills make you feel like a winner, and a hell of a lot more. 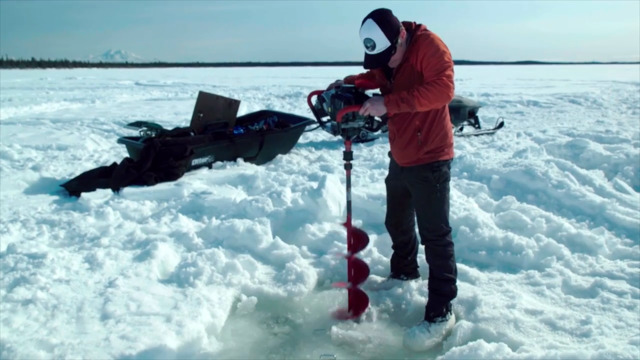 Last Ice: How to Stay Safe and When to Call it Quits

The ice at the lake edge is dark, slushy, and covered in standing water, as if the lake dug a moat...

The ice at the lake edge is dark, slushy, and covered in standing water, as if the lake dug a moat...

Hundreds of Ice Fishermen Stranded in Blizzard: ‘It Looks Like Antarctica’

With walleye season winding down across Minnesota, fishermen from all over the state descended on...

With walleye season winding down across Minnesota, fishermen from all over the state descended on...

On this hunt, Steve meets up with his longtime friend and upland bird hunter extraordinaire, Ronny...

On this hunt, Steve meets up with his longtime friend and upland bird hunter extraordinaire, Ronny...