Kyle Smith was simply thrilled that his calling worked, the turkeys responded, the 22-pound gobbler attacked his decoy, and he was coming home on April 22 with dinner. It wasn’t until he got back home that he realized his bird’s whole body was nearly jet black except for one tail feather.

“The adrenaline was going so much this morning that I didn’t even know,” Smith told MeatEater. “I was by myself. It was raining, so I didn’t want to get my camera gear all wet. I just snapped a couple of quick shots of the snood and the head and loaded him into my truck and I didn’t even realize it was all black until I got home and was taking him out of the back of my pickup.” 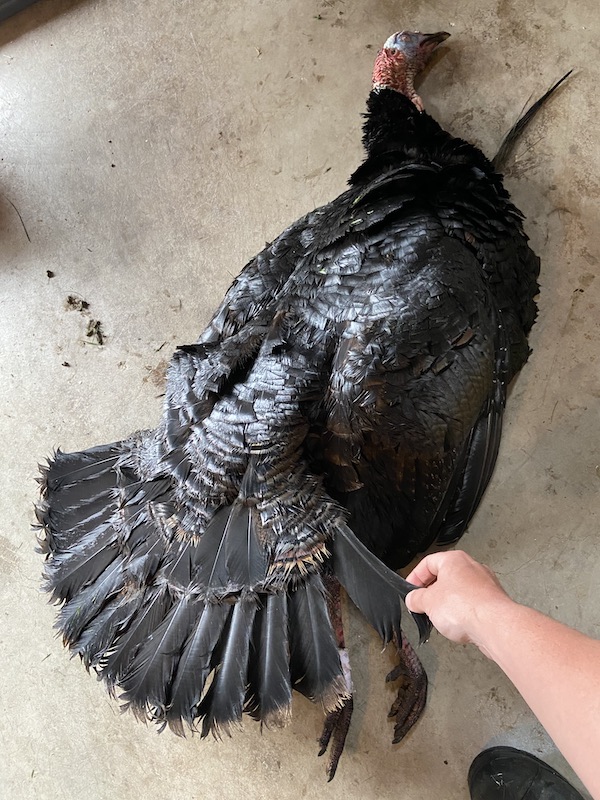 “I texted him a picture at ODFW and he’s like, ‘Oh, it’s a melanistic bird. That’s crazy,’” Smith said.

According to the National Wild Turkey Federation, melanism is a rare genetic pigment mutation that makes a wild turkey produce only black feathers, even their wings. Some researchers estimate that it’s present in 1 in 50,000 wild turkeys. It’s basically the opposite of albinism, which creates all white birds and is slightly rarer. “Erythristic,” or red-colored turkeys, are also very uncommon. “Smokey gray” birds, however, show up with more regularity. These four colors or “morphs” are not temporary “phases” as some hunter slang suggests, but rather are heritable, recessive genes that occur in pockets around the country. Dyches told Smith that a hunter had killed a melanistic jake in the same area last season.

Dr. Michael Chamberlain is a professor and wild turkey researcher at the University of Georgia and a recent guest on the MeatEater Podcast. He confirmed for MeatEater that Smith’s bird was in fact melanistic and said that melanism in turkeys is “extremely rare.”

“I’ll put it to you this way: I have seen tens of thousands of turkeys in my life, whether I’m catching them, tagging them, hunting them, just glassing them from a distance. And I’ve never seen a melanistic bird,” Chamberlain said. “I’ve seen two of the red phases. And of course I’ve seen quite a few smoke phase birds, but I’ve never observed a melanistic bird. In all the 27 years I’ve studied this bird, I’ve never caught one, seen one, anything.”

Some people assume that these color morph birds are escaped domestic turkeys or crossbreeds. But NWTF says that’s not true.

“Most hunters see color variations for the first time and think that the condition is a result of crossbreeding with a domestic turkey. Many wildlife biologists used to think the same thing,” NWTF’s website says. “But these differences occur regularly in flocks that have no contact with domestic turkeys.” 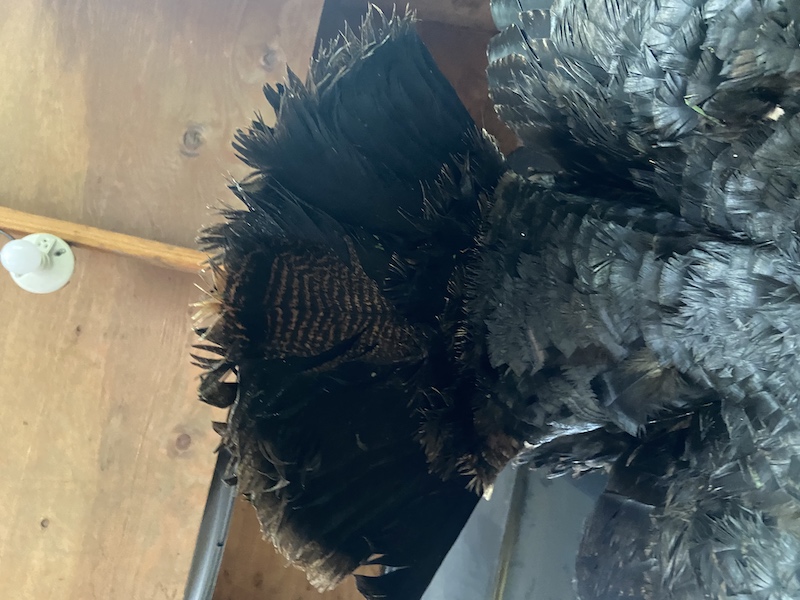 Smith is very excited by his rare specimen but is equally pleased with an exciting and successful hunt.

“I got there at like 6 this morning. It was raining pretty hard and I didn’t hear a lot going on this morning,” he said. “I actually didn’t hardly call at all and that tom and two hens crested over a hill maybe 400 yards away and were feeding down a road. They hung up at like 150 yards and were kind of turning away and like starting to feed back up the hill.”

Smith says he made a couple quick, excited cuts, which got the birds’ attention. The hens started down toward the oak tree he was hiding under and the gobbler followed.

“Then the tom I think spotted the jake decoy and just came on a rope right at it, and just like basically sprinted over to it and started attacking it,” Smith said. “He jumped up on it—I’d never seen that happen before. I’m not a real seasoned turkey hunter. So, it was cool to get the full show, he jumped up on it a couple times and I whacked him.”

Chamberlain says that any estimate of the frequency of these birds is more of a “slap-ass guess” and would be impossible to verify, but melanistic turkeys are certainly something to get excited about. He only hears about one or two every year.

“If you’re a serious turkey hunter and you harvest one, you need to get that thing mounted,” Chamberlain said. Smith was headed to the taxidermist after talking with MeatEater.

Shop All
Save this product
MeatEater x Phelps
LINE 1 Turkey Pot Call
A limited-edition heirloom pot call made from a Kansas Black Walnut tree felled by Steven Rinella and Jason Phelps. This is a limited run product, each is stamped with a sequential number that marks the order in which it was finished.
Save this product
Phelps
MeatEater X Phelps Box Turkey Call
$87.99
This box pairs a beautiful purpleheart lid with a solid walnut body designed for creating raspy old hen sounds that will pull a wily old tom right into your lap.
Save this product
Phelps
MeatEater X Phelps Turkey Call 3 Pack Diaphragm
$34.99
A killer 3-pack including Steve Rinella's signature Jake Brake, Janis Putelis' signature Latvian Eagle and The MeatEater Loud & Clear.
Save this product
First Lite
Phantom Leafy Suit Top
$90.00
Helps you disappear when you get close to your quarry.
Get the latest in your inbox
Subscribe to our newsletters to receive regular emails with hand-picked content, gear recommendations, and special deals.
Our picks for the week's best content and gear
For the whitetail obsessed, with Mark Kenyon
Redefining our connection to food, with Danielle Prewett
Your one-stop for everything waterfowl, with Sean Weaver
Get out on the water with the MeatEater Fishing crew
Technical hunting apparel
Purpose-built accessories for hunting and fishing
Quality elk, turkey, waterfowl, and deer calls
Privacy Policy

While the average weight of a fall turkey is below 15 pounds, a bird of that size will consume roughly five pounds of food each week. That doesn’t sound like much, but fall turkey flocks balloon in size this time of year. On the small side, a flock of just a dozen birds will vacuum up 60 pounds of food each week before winter, and they don’t take kindly to rival birds homing in on their calories. This territoriality is what makes fall turkeys...

Wild turkeys existed in 39 states when the creaky hull of the Mayflower met the coast in the early 1600s. It’s not a sure thing that this wily bird was carved on the first Thanksgiving, yet history reflects America’s affinity for the flesh of this plump galliform to the extent that this species nearly went extinct by the mid-1800s. Today’s population of wild turkeys has skyrocketed with the help of established hunting regulations and conservation...