I’ve been hunting Holyfield – a Michigan buck- for three years now. You might have heard. And now, in what I hope will be his final year running around this property and in my head, I’m trying to take my level of analysis – you might call it patterning or planning – up a notch.

If you’re hoping to analyze or pattern a mature buck yourself, you might be able to learn something by studying my own example below.

Because of the level of hunting pressure surrounding this deer, I’ve found that any and every step I take in pursuit of him negatively impacts my future chances of success – for that reason I’ve come to believe that I need to be increasingly careful about when, where and how I hunt him. If you’re targeting a specific mature buck or are hunting a small property in a heavily hunted area, you might want to consider a similar approach. With that said, if I’m going to do this the right way, I need to really really understand the deer I’m after – in this case, Holyfield. So here’s what I know and how I’ve tried to make sense of it all.

For many of you, this story is well known (maybe too well?). But just in case you’re new, I’ll offer a very quick recap.

I know this buck, Holyfield, has been in the area for at least three years – likely it’s been longer and I simply hadn’t identified him yet. But when Holyfield first popped up on my radar in 2015, I estimated him to be a great two year old, for the area, or an average three year old. 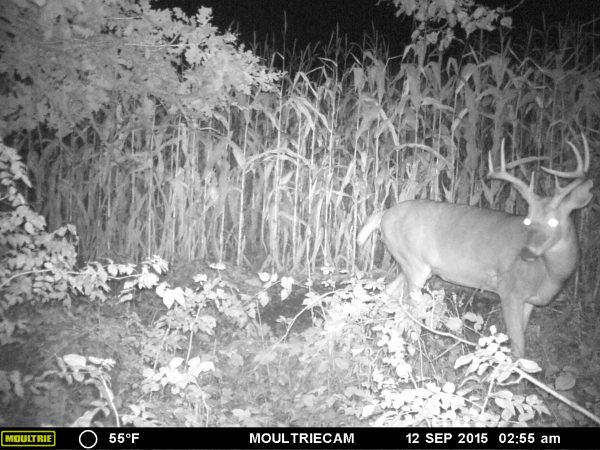 I saw him a handful of times over the course of that fall, including a shot opportunity in late October, and captured hundreds of trail camera photos. But since I’d already killed a buck on that property in 2015, I chose not to hunt him until 2016. 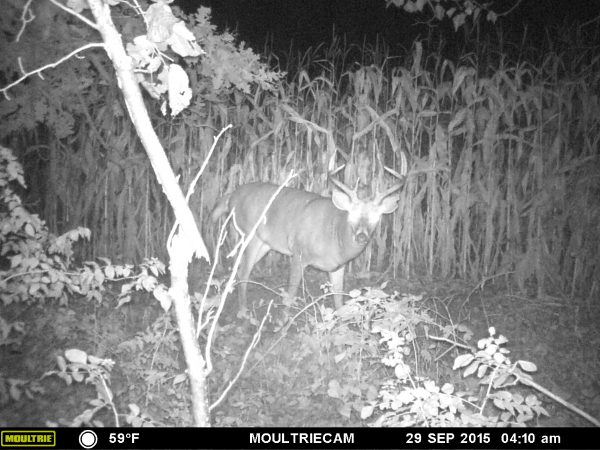 When 2016 arrived Holyfield was my #1 target buck, and I estimated him to be a four year old (like I said earlier, I could be off by a year). As he’d done the year before, he showed up in September and stayed in the area all through the fall. I again captured hundreds of photos and saw him with my own eyes more than 25 times. 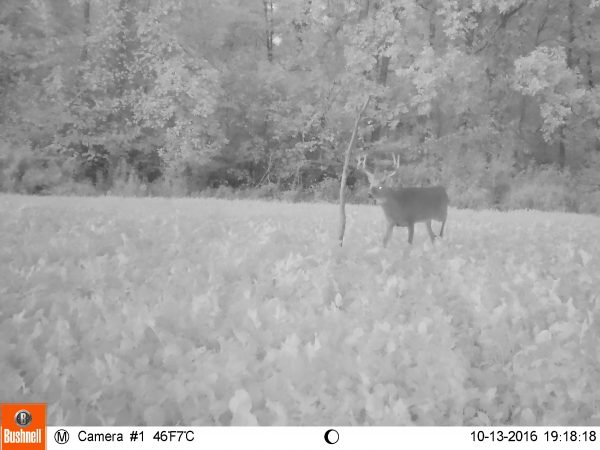 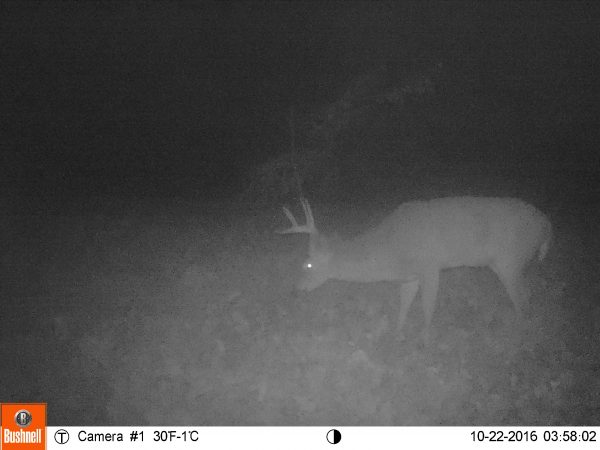 I had many encounters with the buck that year and actually had a 40 yard shot at him in late October that I passed on because of low light. Then, in December, after seeing that he’d made it through all of October, the rut and the firearm season, I decided to change my plans and see if he could make it one more year. I explored this decision in greater detail in the short film below.

So now here we are, in year three of this pursuit, and Holyfield is back. Interestingly, he doesn’t look a whole lot different than he has in years past. He just doesn’t seem to be a buck with big antler potential – but I’m not worried about that at all. A mature buck with three years of history is a hard thing to come by in Michigan – I’m thankful to have him around to hunt.

But with three years of information gathering, I’m now starting to have a pretty substantial set of data to work with when trying to understand what this buck does, when he does it and why – all questions I hope to answer to better inform my decisions of when and where to hunt him.

To help make these types of decisions in the past I’ve used tools like DeerLab to analyze trail cam photos of Holyfield, but this year I wanted to take my research even further and pull in actual observation data as well. So I’ve now went ahead and completed a detailed analysis of every daytime photo or sighting I’ve had of Holyfield in the three years so far. That totals 54 separate data points – that meaning there were 54 different days that I either saw Holyfield in daylight or captured a daylight photo of him over these three years.

I collected all of these data points into an excel doc and then pulled in all the other variables that were present during that encounter/photo – ie. wind speed, wind direction, barometric pressure, temperature, whether it was a cold front or not, whether there were any moon factors impacting movement, etc, etc. With this database I can now filter by different locations, times of year and/or any other variable that might be present or upcoming for future hunts to better help me understand if and when Holyfield might move in daylight with that set of circumstances.

Unfortunately, after all of this analysis, no new major pattern emerged that I wasn’t already aware of related to factors that trigger Holyfield to move. There didn’t seem to be anything moon related that correlated well with his daylight activity, nothing barometric pressure related, not even cold front related – only 37% of my daylight data points occurred during/after a cold front. But still, I think it was a helpful exercise and something I’d recommend you consider trying as well if you are targeting a buck with multiple years of history.

If any kind of trend did emerge, it was that this buck is much more daylight active in my area when there is some kind of westerly wind. In fact 72% of my daylight photos/sightings occurred with this wind direction. Of course, this could be because our winds here are usually westerly anyways – so how much value this data provides is up for debate. 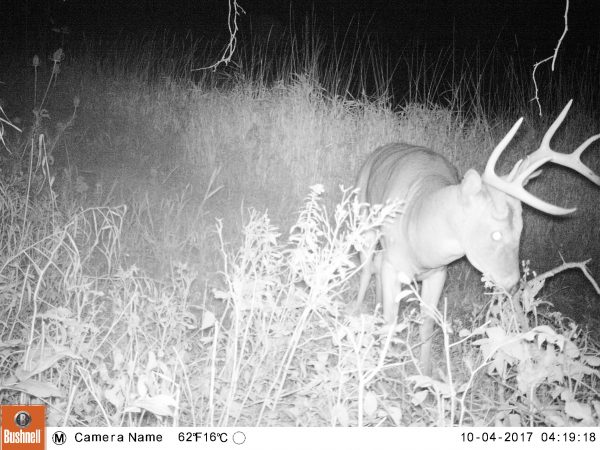 Nonetheless, I’m glad that I can at least say that I’ve examined all of the possibilities. But this just answers the question of when. An equally important issue is where. And this too, I’ve been able to parse out after three years of observations and photos. I’ve been able to determine, as best as I can figure, that there are two general areas that Holyfield seems to bed most often – neither are on ground I can actually hunt. I also know of a few areas he tends to feed and/or check does, several of these are in areas I can hunt. I also have noticed what times of year he tends to use these areas most. For example, an area surrounding my front food plot on the property tends to be visited by him most in October and November. But in December he tends to visit a back food plot area more often.

Using This Data To Inform A Hunting Plan

With all of this information analyzed and with no new daytime sightings or photos to go off of this year,  I’ve stuck to a more conservative approach to hunting Holyfield in 2017 than in 2016 – when I hunted him several weekends in a row in early-mid-October with no sightings. This time, after only a single hunt on October 1st, I’ve stayed out completely until history and/or real-time information tells me to go in after him.

There has been no new daylight intel, so I’ve been waiting until history – his “annual pattern” – indicates it’s worth hunting. And for this property, that has been late October. In both 2015 and 2016, I started having daylight encounters with him at this time. So at that point in 2017, I’ll start hunting again and I’ll be targeting a handful of stand sites that I’ve set-up specifically for this buck based on all of these aforementioned lessons learned – some are on the edges of his known bedding areas, some are near carefully planned, secluded food sources. And by staying out of these locations until late October, my hope is that this buck and the local does will be more comfortable than they were last year moving close to my stand sites in daylight. The first sit in these spots will all be during the prime-time according to past years observations/photos.

So that’s the plan. And once the right calendar dates appear and I catch some westerly winds with decent temps, I’ll start to execute on it.

Only time will tell.

Want to learn more about analyzing or patterning bucks? Check out these podcast episodes:

The Art of Hunting A Single Specific Buck w/Bill Winke

Last winter, after deciding to press pause on the hunt for Holyfield until 2017, I set my sights on a new target for the coming months. Finding Holyfield’s sheds. I’d decided to wait another year before trying to put a tag on the old buck, but admittedly I still wanted to wrap my hands around his antlers. I thought that if I could find his sheds – even if I never did end up killing him – I would still be able to have a physical token of this hunt...

By Mark Kenyon Last week I found a shed off the buck I call Holyfield for the first time in the four years I’ve been following him. Not only was this the first time I’d held one of his sheds, but it was also the moment I realized he had survived the 2017 season. Here’s a quick look at that moment.

How to Identify a Big Buck Track in Snow

When there’s snow in the forecast during hunting season, you can bet I’ll be heading to the whitetail woods. That’s for one simple reason: Snow shows deer patterns like a black light exposes invisible ink. Tracks are what tell the story. Whether it be to follow a buck on foot or verify the presence of mature deer in the area, being able to accurately pick out a big buck track in snow is an important skill for any savvy whitetail hunter. Here’s...