The Yazoo Backwater’s surrounding levees provided the only high ground for displaced wildlife, but all those miles of manmade barriers provided little sanctuary throughout the unprecedented deluge. The Backwater, or South Delta, covers about 1,550 square miles of fertile valley in west-central Mississippi north of Vicksburg, where the Yazoo River flows into the Mississippi River.

The Yazoo Backwater reached flood stage (87 feet) on Jan. 4, 2019, peaked at a record 98.2 feet on May 23, and stayed above flood stage until Aug. 10. The flood’s crest coincided with the region’s peak nesting and fawning periods, crushing populations of wild turkeys, whitetail deer, and ground-nesting birds.

The Backwater’s floods also drowned two people, covered three highways, and swamped or destroyed 686 residences. The seven-month flood caused at least $800 million in agricultural losses and damage across half a million acres of farm fields.

Devastated Wildlife
William McKinley, deer program coordinator for the Mississippi Department of Wildlife, Fisheries, and Parks, said the Backwater’s 2019 fawn “crop” was devastated. So was the entire turkey population. Agency biologists and researchers at nearby Mississippi State University documented only four turkeys in 8,790 wildlife photos taken in October 2019 during a monthlong post-flood study using 300 trail-cameras. That study on the Shipland Wildlife Management Area, one of seven WMAs that flooded, also estimated a 5% fawn survival rate.

The biologists conducted weekly deer surveys along a 26-mile route on the Backwater’s southwestern levees. They regularly photographed emaciated deer and counted 503 dead whitetails from mid-June to early August. They necropsied deer when possible, and attributed most deaths to starvation and heat exposure. And because this is where Mississippi first detected chronic wasting disease in February 2018, they also collected tissue samples for CWD tests.

Much of the devastation occurred on levees flanking the Yazoo Backwater’s western border with the Mississippi River and its eastern border with the Yazoo River. If this were an animal horror movie, warning signs on the levees would read, “Abandon hope all ye who enter here.” Everything that could fly, walk, crawl, or slither sought refuge on the containment walls. Once there, they fought for food, shelter, and shade—all of which were scarce.

McKinley said starving raccoons proved a nuisance and nemesis to all. They honeycombed the levees by digging burrows for shelter, making it difficult for agency and university biologists to walk without stepping into holes.

“I figured the raccoons would live up in the trees, but they settled into holes all across the levees and stayed,” McKinley said. “You had to be careful where you stepped. Every 25 yards you’d find a hole with a raccoon in it. We have no idea how many were out there, but they were dying, too. They were in poor condition; unkempt and unaware, and in really poor health. When they were scavenging something, we’d get within 4 to 5 feet before they realized we were there.”

Turtle Carnage
When the biologists weren’t dodging raccoons and their burrows, they were driving or stepping around their means to survival.

“Empty turtle shells from red-eared sliders were everywhere,” McKinley said. “There were thousands of them. One time we saw three raccoons tussling over a big red-eared slider. All the female turtles were on the levees. They had nowhere else to lay their eggs. The raccoons figured them out quickly. They chewed off a rear leg, reached up inside for the eggs, cleaned everything out, and moved on to the next one. They picked them clean. Those turtle shells looked like they’d been steam-washed.”

“I can’t document it, but it looked like the raccoons just gathered around the does and waited for fawns to drop,” McKinley said. “I firmly believe that. The only broken bones were the fawns’ ribs, so I doubt something bigger killed them and that the raccoons just cleaned things up. All the bigger bones were chewed, not broken. All the meat was picked clean.”

McKinley said those scenes were among the flood’s many unexpected sights and behaviors. During most floods elsewhere, deer flee lowlands for the nearest hills and higher ground. Some deer from the Yazoo Backwater probably did, too, but many did not. Those remaining spent so much time in water that their hooves grew soft with rot. McKinley also recalled counting 1,200 deer scouring a field in 12 inches of standing water on a hot day, three hours before dark.

“We can’t explain why so many deer stayed,” McKinley said. “They have ways to get out, but it’s not easy. On the other hand, assuming some deer fled, if they had CWD they carried it to new areas. We have lots of questions that will take a while to answer.”

McKinley said most songbirds also fled the Backwater, but there was no escaping the stench of death and unique, unexplained oddities. Paper wasps, for instance, usually build their papier-mâché nests just off the ground in low brush. But with floodwaters covering brush and reaching far up trees and powerline poles, the wasps built their volleyball-size nests on the powerline’s thick wires.

“We’d be driving along and see a wasp nest on a wire, and wonder why would they build there with trees everywhere,” McKinley mused. “But then we’d see another nest, and another and another up on the wires.” 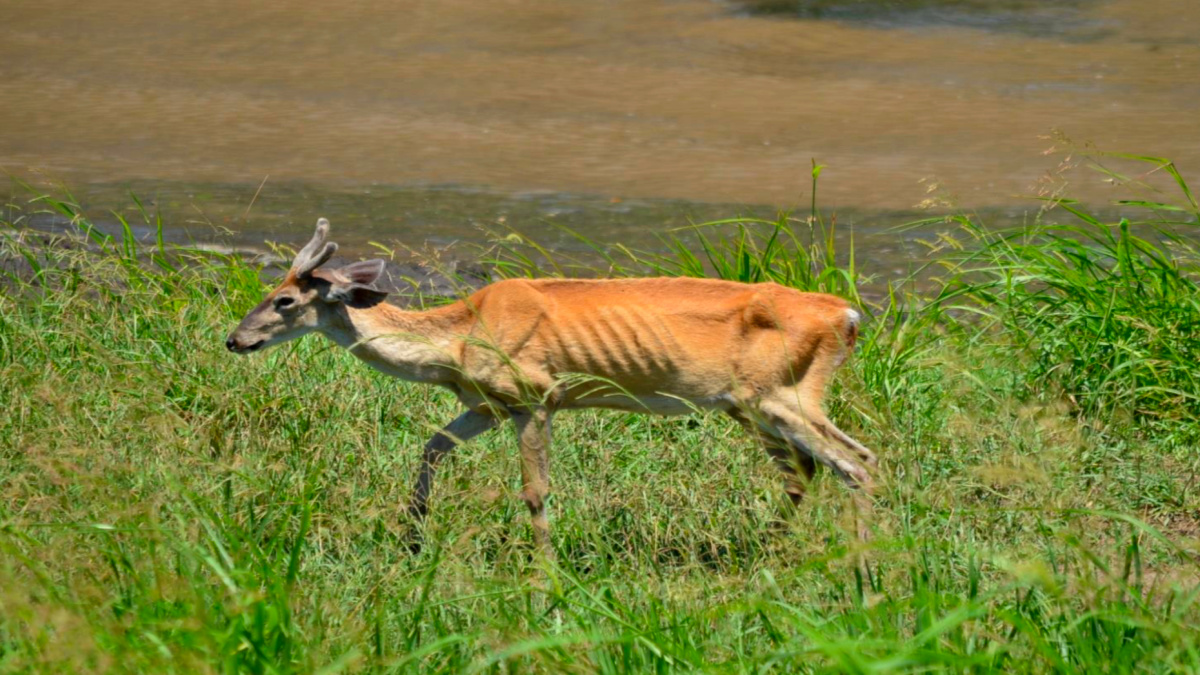 Turkey Struggles
The Yazoo Backwater’s wild turkeys, however, left scant evidence of their presence or passing. Adam Butler, wild turkey program coordinator for the Mississippi DWFP, said the area’s turkey flocks had already declined much of the past decade because of frequent flooding, but brood surveys in 2018 suggested a considerable boost for the population.

Unfortunately, last year’s flood made poult production impossible, and Butler worries the flock lost the previous year’s gains, and maybe more. He said turkeys can’t live and forage for long in treetops, and can’t find food closer to the ground during floods. That’s not just Butler’s opinion. He references research by Michael Chamberlain, a recent guest on the MeatEater Podcast (Episode 214), who documented only one in five adult turkeys he monitored in 2011 survived a month-plus flood farther south in the Atchafalaya Basin.

Chamberlain noted that turkeys move to higher ground if they know it exists. But if that ground isn’t high enough to escape floodwaters, turkeys just keep searching their known turf until starving to death. At least that’s what Chamberlain’s GPS-collared turkeys showed.

Here’s how that went: A bobcat killed one hen the day the flood began. Another hen lived 21 days, and a third disappeared. It’s unknown if the missing hen’s collar malfunctioned or got destroyed in the flood. The lone surviving hen found dry ground 29 days into the flood as waters receded. The lone tom should have stuck with her. It died in a water-inundated area 31 days into the flood.

“Turkeys aren’t like deer,” Butler said. “Turkeys typically stay near home. They don’t know the land beyond the horizon.”

Butler said the Yazoo Backwater’s turkey flock typically isn’t large, and usually cycles with regional flooding. The hatch booms to bolster the flock in years with short flood seasons, and busts in years with heavy flooding. Adults typically endure because most floods recede after two to three weeks. Insects and vegetation pop up soon after, and life goes on.

Watery Trend
That pattern fell apart the past decade because of prolonged rains and flooding. “Adult turkeys can’t survive in the trees’ canopy six to seven months like we saw last year,” Butler said. “We expect their survival in the Backwater last year was very low. It’s possible the survivors might pull off a hatch this year, but it’s getting late [April 29] and the river is still at flood stage.”

The 2019 flood and its harm to people, property and wildlife aggravates a long festering debate in the Yazoo Backwater and extended Mississippi Delta system, which spans 200 miles from Vicksburg to Memphis, Tennessee. Levees on the valley’s entire western edge protect it from the Mississippi River’s floodwaters, and levees on its southeastern side protect it from the Yazoo River’s floods. The land mass in between covers nearly 4,100 square miles, slightly smaller than Connecticut.

When a swollen Mississippi River forces Steele Bayou’s floodgates to shut, residents pray that winter and spring rains stay away. If they don’t, the Yazoo Backwater starts filling. Everything will be fine if the Mississippi River recedes before the Backwater reaches flood stage. If not, the 2019 scenario unfolds. (That buildup began in October 2018 with sustained heavy rains.)

The Backwater’s original engineers considered such emergencies: They would build a giant pumping station at Steele Bayou once the structure was finished (1969). To prevent disasters like 2019, those pumps would evacuate rainfall trapped within the levees.

But the pumping station was never built. Funding squabbles between state and federal officials delayed construction for decades, and then the Environmental Protection Agency ruled against the pumps in 2008. Regional rainfalls since then have caused simultaneous flooding inside and outside the Backwater several times.

Conclusion
Meanwhile, hunting clubs, conservation organizations, and the Mississippi DWFP spent much of the 1980s and 1990s using the Conservation Reserve Program and Wetland Reserve Program to help improve the Delta area’s turkey habitat. Butler hopes all that money and foresight wasn’t in vain.

“A lot of those trees are now 25 years old, and turkeys can probably start using those areas over the next five years,” he said. “We’d like to get back to doing some trap-and-release to help re-establish those flocks. It would make a great turkey woods if we give it the needed time. That would be a real success story.”

Playgrounds to Ponds: When Deer Die in Strange Places

I’m still waiting for two sticks of summer sausage from a buck that died in my driveway in November 2015. Something tells me the guy down the street forgot all about his promise to bring my reward for finding his bow kill. Funny thing, gratitude: It’s abundant in the moment but fizzles faster than morning fog. Not only did I find that bow kill on my property, but I also found the bowhunter after backtracking the buck’s blood trail through two...

Hunter Gored by Buck He Shot, Dies in Hospital

We run a lot of coverage of bears, lions, and wolves attacking humans, but this is a new one for us. According to the Arkansas Game and Fish Commission, a 66-year-old hunter died this week while recovering a whitetail buck that he’d shot. “I’ve worked for the game and fish commission for 20 years, and it’s one of the stranger things that’s happened,” said Keith Stephens, chief of communications, in an interview with KY3 News. The hunter was...

26 Days In A Tree: Lessons Learned Chasing the Rut

By Mark Kenyon It started on October 24th and it ended this Monday, November 19th. My annual rut hunting marathon. Over that stretch I hunted 26 of 27 days. 15 of those days were all-day sits. And I had encounters with my target buck 11 times. I sat in temperatures from the teens all the way up into the 60s. I sat in rain and snow. I stood in wind and fog. At times I sat for hours and saw nothing. Other times I saw dozens of deer in just minutes...