Training and fieldwork creates a special kind of bond between a dog and its owner. But our four-legged friends often find themselves in situations where they need your help. Our new Ask A Vet series delivers advice directly from a professional, working veterinarian. Have a question about your dog? Shoot an email to themeateater@themeateater.com and we’ll dig into the concern.

“I took my lab Koda to a hunt club for training on pheasants. I sent her to fetch a bird across a creek and deep embankment. Her gait upon her return was best described as someone who was having a stoke – wobbly, breathing hard, and obviously in distress.

She couldn’t walk or pick herself off the ground for a good 15 minutes and I was at a loss for words. Suddenly, with rest in the snow and ample hydration, her symptoms resolved. I later learned this condition is called “EIC” and it’s somewhat common in labs. Have you ever heard of such a thing, and what other conditions should I be aware of with the labrador retriever breed?” -Jared Wiklund

The Labrador reigns as one of the most popular breeds in the field, blind, and living room for good reason. They’re biddable, handsome, and hard-working, with big hearts, bigger appetites, and a generous off-switch that makes them a joy to keep around the house. If you’re in the market for one—and you should be if you hunt waterfowl and upland—you need to familiarize yourself with a couple of common ailments in the breed before picking a pup or planning a lifetime of adventures together.

By no means an exhaustive list, this article touches on canine hip dysplasia (CHD) and exercise-induced collapse (EIC). While there’s no medical link between the two, veterinarians see both of these with some frequency.

They’re also the diseases that can most significantly impact your pup’s hunting career.

Canine Hip Dysplasia
Retriever enthusiasts typically have some familiarity with hip dysplasia, as CHD is prevalent in the breed. Many puppy buyers who contact me when window shopping breeders, however, don’t fully understand what’s involved in this disease.

In medical jargon, hip dysplasia refers to improper development of the ball-and-socket where the femur meets the pelvis. Simply, a loose fit in the hip joint (referred to as laxity) contributes to inflammation, which progresses rapidly as the dog ages into full-blown osteoarthritis and, with it, chronic pain and lameness.

These clinical signs become liabilities for hunting dogs tasked to bust cover and swim icy water. Hip arthritis and lameness are also, sadly, among the most common reasons I’m asked to euthanize a retriever.

When shopping for a pup, pay close attention to whether the breeder has done full OFA (more common) or PennHip (potentially more accurate) testing in the parents and note the evaluation provided by these screening tests. Inquire whether OFA/PennHip evaluation is available for previous generations as well, as a pup’s genetics play an important role in the development of this disease. If the breeder hasn’t bothered, look elsewhere. That $300 backyard-bred Lab may turn out to be a winner, but I’d rather pay more up front for a pup from a breeder passionate about eliminating CHD from their lines. Odds are you’ll come out ahead in the long run. 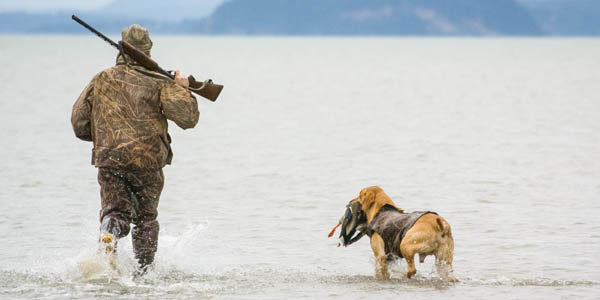 In addition to genetics, a cocktail of environmental factors can also contribute to a dog developing CHD. Lean body mass in adolescence and tempered growth in puppyhood can mitigate the onset of the disease. I cringe when owners brag about how fast their Labrador puppy is growing on an all-you-can-eat diet.

Take it easy, feed conservatively, and play the long game by easing your pup into its trim, athletic stature. Doing your homework when shopping and practicing restraint with feeding could buy you and your pup another couple of seasons together down the road.

Exercise-Induced Collapse
Thanks to concerted screening efforts by quality breeders, EIC has become far less common in Labradors. That’s great news for bird hunters, as pups affected by this autosomal recessive genetic mutation can have limited utility as hunting dogs. 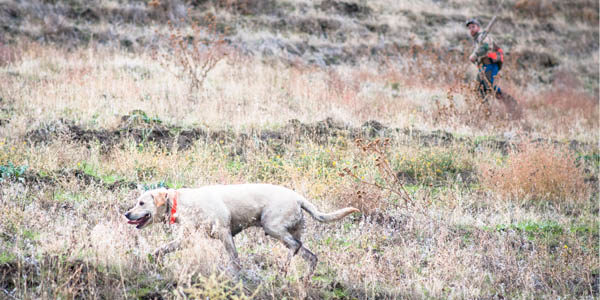 EIC involves a defective protein required for recycling neurotransmitters. These tiny signaling molecules facilitate electrical impulse conduction down nerves, and the normal protein serves as a revolving door that sends neurotransmitters back to the upstream nerve from the downstream recipient. In the Labrador with EIC, improper neurotransmitter recycling causes a bottleneck that leads to muscle weakness and lack of coordination.

Affected animals start with hind limb weakness that can progress to non-painful, full-body paralysis if not addressed quickly. In extreme cases, paralysis may affect the diaphragm, leading to death. If the dog is rested immediately at the onset of symptoms, most episodes usually resolve within 20 minutes. More serious issues arise when owners are unaware their Labrador has the disease or don’t recognize the early warning signs.

This disease is manageable, a fact I can attest to through both professional and personal experience. I’ve spent numerous days hunting over Cooper, a pathologically friendly Lab that doubles as a pheasant freak and green-head-getter. His owner, also a veterinarian, stays dialed into ol’ Coop’s energy and takes a break at the first sign that his EIC might slow him down. A properly timed water break and short rest later, we’re back at it. He’s not going to win any field trials with this ailment, but he and his owner put a lot of roosters and drakes in the bag each season.

Fortunately, DNA analysis has allowed quality breeders to screen for many Labrador issues, particularly EIC. Pups from carrier parents should be tested, and affected animals, as well as those who carry just one copy of the affected gene for EIC, should be eliminated from a breeding program. While not definitive, a DNA test that evaluates the likelihood of developing CHD may help eliminate hip dysplasia from this beloved breed. While decades of sequential orthopedic evaluations (OFA and PennHip) have kept severely affected animals out of the gene pool, CHD still persists. Looking forward, the disease may require more thorough genetic screening to fully eradicate.

Ask A Vet: When Should You Euthanize a Dog?

Training and fieldwork create a special bond between dog and owner. But our four-legged friends...

Training and fieldwork create a special bond between dog and owner. But our four-legged friends...

Why Every Bird Dog Should Be Crate Trained

Many hunters believe their only job is to teach their dog how to hunt. In reality, a good handler...

Many hunters believe their only job is to teach their dog how to hunt. In reality, a good handler...

Training and fieldwork creates a special kind of bond between a dog and its owner. But our four...

Training and fieldwork creates a special kind of bond between a dog and its owner. But our four...