Training and fieldwork creates a special kind of bond between a dog and its owner. But our four-legged friends often find themselves in situations where they need your help. Our new Ask A Vet series delivers advice directly from a professional, working veterinarian. Have a question about your dog? Shoot an email to themeateater@themeateater.com and we’ll dig into the concern.

As the temperature drops later in the hunting season, the risk of cold-related injuries to your bird dog starts to rise. A little extra effort on behalf of your canine while you’re packing extra gloves and a wool hat in your vest will help extend your time afield and keep your pup safe when the weather turns nasty.

This article primarily focuses on two dangerous scenarios, hypothermia and frostbite, and tips for preventing them. We’ll round out our discussion of winter weather concerns with an overview of “cold tail,” one of those odd ailments we occasionally see in bird dogs later in the hunting season.

Some of this advice may seem obvious, but sometimes the most obvious steps in preventing serious issues in the field can escape us in the heat of the moment. I’m often in such a hurry to set up on those hungry, cupped-wing mallards when a blizzard rolls in that I’m guilty of rushing through my normal pre-hunt preparations for my bird dogs. I’ve even forgotten my shotgun on more than one occasion. Make sure to remember the little stuff in order to keep your dog safe.

Hypothermia
You should familiarize yourself with the symptoms of canine hypothermia so you know when to take action. Admittedly, cases are not common and usually involve bird dogs who have spent several nights in the field after getting separated from their owners. 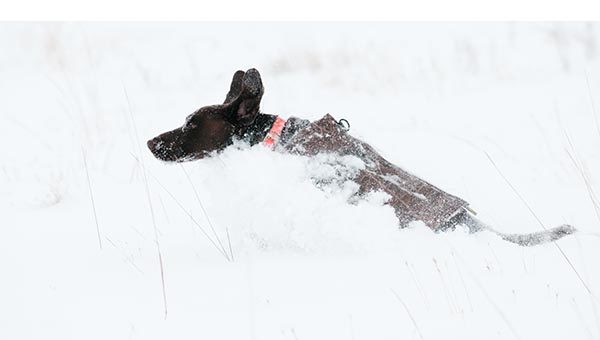 It’s not practical to plan for this scenario, so I focus on prevention with a functional (and fully charged) GPS collar and transmitter during every outing, even when I’m hunting ducks in a field. Your pup will undoubtedly pick the very day you forgot your GPS collar to chase a deer far over the horizon and spend the night outdoors.

If you find your bird dog disoriented, lethargic, or shivering uncontrollably in the field, you should take immediate action to warm him or her up, even if it means throwing in the towel during some of the best hunting of the season. Those behavioral changes mean vital organs, specifically the brain, are being robbed of blood as the body tries to compensate for the drop in temperature. Take immediate action and get your hunting dog out of the field, dried off, and warmed up in the cab of the truck.

Neoprene Vest for Harsh Conditions
Neoprene vests are much more than a stylish way to add more of your preferred camo pattern to your life. They can be a real game-changer in preventing cold-related injuries. 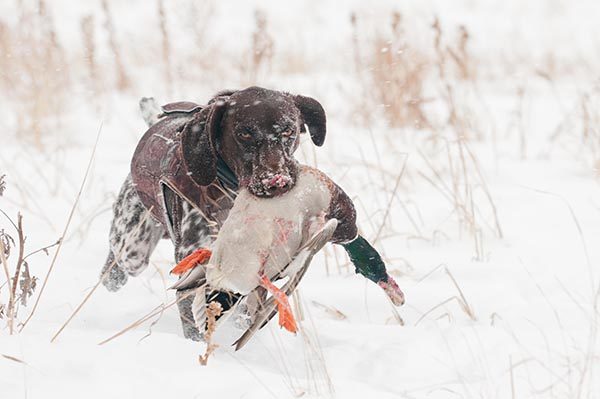 I’m often asked at what ambient temperature bird dog owners should suit up their pups, and the answer depends less on the mercury and more on the hunting situation. Are you working from a blind? Are wind, snow, or water retrieves in the game plan for your outing? Stationary hunting, wet conditions, and wind contribute to rapid loss of body heat. A vest keeps your pup’s core temperature high in these scenarios, allowing for better blood perfusion (and warmth) to extremities like ears, tail, and feet.

Working bird dogs generate a tremendous amount of heat when hunting in the uplands. While neoprene vests can offer some protection from abrasions in the field, I rarely recommend them for upland hunting unless high winds or water retrieves are expected. The vest’s efficiency at trapping heat may be counterproductive in most field situations where your bird dog is covering ground at a steady clip.

Frostbite
As a self-protection mechanism in cold weather, a dog’s body restricts blood flow to its natural heat radiators to maintain a safe core temperature for vital organs. In this metabolic scenario, ears, feet, and noses are vulnerable to frostbite. However, don’t neglect to examine other tissue like the tip of the tail and the scrotum. If any of those areas are painful, dark red or purple, or cold to the touch (don’t be bashful), get your pup warmed up and dried off with a hearty jog to the truck and some time in front of a heat vent.

When you get home, closely examine those areas for discoloration—especially if they’re black or dark red—as these changes may indicate frostbitten tissue. If you’re suspicious this has occurred, get your veterinarian involved right away.

Cold Tail
If your hunting dog has endured an episode of “cold tail” (or “limber tail” in some areas of the country) you’ll likely recall the anxiety of figuring out why your pup’s happily wagging rudder suddenly became partially paralyzed and painful after a hunt. The owners who bring their hunting dogs to me for this condition seem to share the same look of panic. But, fortunately, they all leave the clinic with the reassurance that, despite the severity of the symptoms, their hunting dog (usually a retriever) will be on the mend quickly.

While the factors contributing to this ailment are unclear, cold tail likely involves a sprain of the muscles involved in wagging. Chilly water, swimming, and fatigue of these muscle groups during an outing contribute to the onset of this condition, although I would argue that the latter two are more consistent prerequisites for an episode. One of the most severe cases I’ve seen involved an older Lab and a summer weekend filled with swimming and camping on the river with his owner.

Most commonly, dogs with cold tail experience sharp pain about four inches from the tail base.  The pup may hold the tail limp or off to one side and some have raised hackles on the top surface. They all demonstrate some degree of resentment to contact in that area. In fact, I usually get my first clue that cold tail might be a factor when the technicians report back that your pup showed a strong reaction to having his tail lifted while taking a rectal temperature.

Fortunately, most cases come around quickly with rest and pain management. Also, I rarely see repeat offenders for cold tail in the clinic, even among bird dogs who return to hunting hard for the rest the season. Don’t feel timid about getting back in the field or blind after your pup has fully recovered. 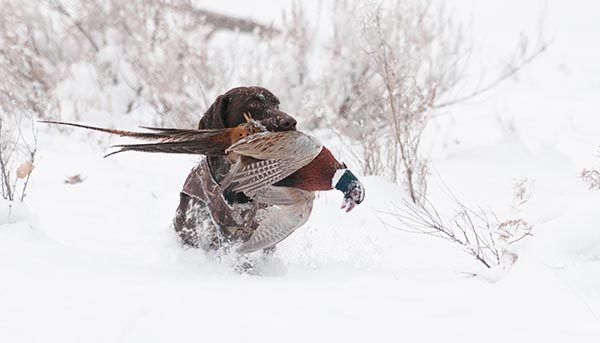 I’m happy to report that, overall, I don’t treat many cold-related injuries in my practice, due in large part to diligent owners that keep tabs on their hunting partners. If you’re like me, staying home by the fire during some of the best hunting of the season is not an option. Paying attention, being prepared with a vest in the right conditions, and having an exit plan when the weather gets the upper hand usually suffice for preventing a complete catastrophe afield.

Training and fieldwork creates a special kind of bond between a dog and its owner. But our four-legged friends often find themselves in situations where they need your help. Our new Ask A Vet series delivers advice directly from a professional, working veterinarian. Have a question about your dog? Shoot an email to themeateater@themeateater.com and we’ll dig into the concern.  Much like religion and politics, canine nutrition is one of those...

Ask A Vet: When Should You Euthanize a Dog?

Training and fieldwork create a special bond between dog and owner. But our four-legged friends often find themselves in situations where they need our help. Our new Ask a Vet series delivers advice directly from a professional, working veterinarian. Have a question about your dog? Shoot an email to themeateater@themeateater.com and we’ll dig into the concern.  If there’s any fault in our love of bird dogs and the strong bond we build with them...

Ask A Vet: Should I Spay or Neuter My Bird Dog?

Training and fieldwork creates a special kind of bond between a dog and its owner. But our four-legged friends often find themselves in situations where they need your help. Our new Ask A Vet series delivers advice directly from a professional, working veterinarian. Have a question about your dog? Shoot an email to themeateater@themeateater.com and we’ll dig into the concern.  “My GWP just turned two years old and rumors around the bird dog...