During the survival adventure of a lifetime, I got to experience firsthand what it’s really like to live in the woods without outside help for as long as possible. Of the many things I learned in the Canadian sub-Arctic as a contestant on the History Channel show “Alone,” I found out that rabbit starvation is real. If you only eat rabbits for weeks on end, you will wither away and die. If you’re lucky enough to find a porcupine, you might live. Here are five reasons why.

Porcupine Meat Has Glorious Fat
During my years living in the wilderness, I’ve found many wild foods to be abundant. But the one nutrient that can be the hardest to find—and absolutely necessary for survival—is fat. It all comes down to fat. In a culture where nutritional trends tend to encourage the avoidance of fat, it’s hard to imagine a world where it’s scarce. However, this world exists, and that’s the wilderness.

In the quest for fat, the places to look are tree nuts, animals, and fish. However, only certain species during certain times of year have enough fat to sufficiently fill your nutritional need. Rabbits, for example, have almost no fat, and that’s why, even if you are eating them every day as I was, you will starve. Porcupines, however, are gloriously fatty. Bears and beaver are also fat-rich animals, carrying the most fat in the fall and the least fat in spring.

I once guessed the origins of their name, joking that it was a play on the phrase “pork of the pines.” My speculation turned out to be not far off. The roots of “porcupine” come from the Latin porcus, meaning pig, and spina meaning spine. Roughly translated this could be read as “quill pig” or “spine pig.”

If I had to compare the taste of porcupine with a common food, it would be pork. Granted, I was surviving on the land with no spices or condiments, so my taste buds might have been a bit biased. Either way, the porcupines’ fatty meat makes them a godsend when living or surviving in the wild, and pretty darn tasty on any other day as well.

Porcupines are a valuable survival food that many northern cultures would traditionally only harvest them in times of need when other food sources were not available, intentionally saving them for lean times. 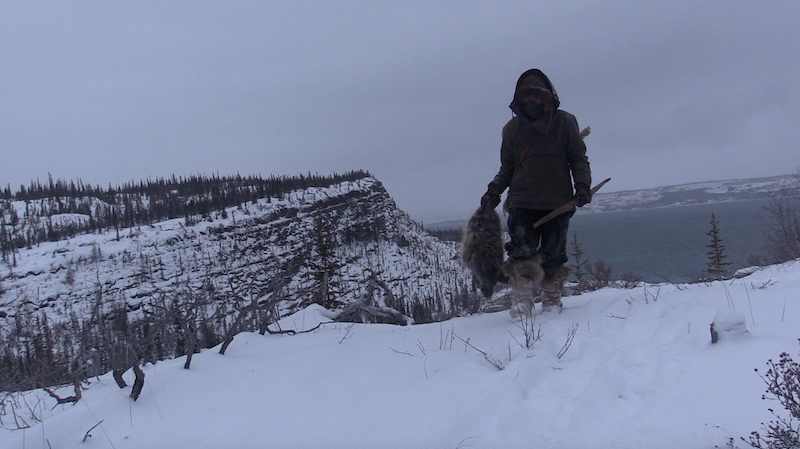 Slow Moving
Porcupines don’t run fast; in fact, they don’t really run at all. If they notice you, they will move towards the safety of a tree or rock crevice. If escape is not available, they will hold their ground, turn their spiky butt towards you, and rely on their tens of thousands of quills to defend themselves.

These giant rodents do not utilize acute hearing or an ability to physically escape predators like many animals. They are definitely not going to charge away, disappearing into the forest like a deer or squirrel at the break of a twig. This makes them a lot easier to find and harvest.

Sticks and Stones
No fancy tools are required to turn a spine pig into a meal. Since porcupines don’t sprint away, they can often be easily clubbed with a sturdy stick or knocked out of a tree with a rock. That said, the porcupines I encountered in the sub-Arctic were all in hard-to-get places where using a club was not an option. In such cases, a stick bow comes in handy and provides an easy means of harvest. Their propensity to hunker down between rocks or “hunker up” in tree branches make them an easy shot with an arrow.

Even though the “pine” in porcupine does not refer to pine trees, it is fitting since they spend a lot of time eating conifers. Porcupines are herbivores. They eat tree bark, needles, buds, leaves, and rose hips, so don’t forget to look up when you are searching for a quill pig.

Travel Size
Weighting between 15 and 35 pounds, porcupines are the perfect size. They are big enough to make several hearty meals, but not so large as to force you to expend energy and resources preserving the meat and protecting it from other hungry animals. If you’re on the move, you can easily carry your haul with you—no need to worry about making a cache. Just watch out for the spines.

Simple Tracking
Porcupine sign is unique and not easily confused with other animals. Their tracks are most similar to skunk tracks, but there are several differences. The front feet of a porcupine only have four toes that register in snow and mud, while a skunk has five. The hind feet of both porcupines and skunks have five toes. Spotting freshly eaten bark higher up in trees or porcupine-sized scat under a rock cavity are sure signs you’re in their territory.

Porcupine Meat is Easy to Cook
The best way to get all the precious fat and nutrients from a porcupine is to keep the skin on and roast them whole, similar to how you would prepare a whole pig.

What about all those quills? One porcupine can have up to 30,000 quills, all of which contain barbs that cause the quill to embed deeper into the skin after penetration. One way to safely deal with the quills is to just burn them off.

Quills are valuable to people that practice the ancient tradition of quillwork so I like saving the quills to give to my quill worker friends, who will use them to embellish clothes, moccasins, knife sheaths, etc. Tribes such as the Athabaskans harvest quills by throwing a piece of buckskin on a porcupine, sticking a bunch of quills into the fabric and then allowing the animal to go free. This method can also be utilized after the porcupine is dead—an old t-shirt, piece of leather, or foam chunk works the same. You can also wear leather gloves and carefully pull the quills out this is what I did with the porcupines I harvested in the Northern Canada. It’s not the most time-efficient method, but it works.

There are no spines on the belly of a porcupine, so gutting them without getting quills in your hands is pretty straightforward—just work slowly. I usually gut before roasting, but have heard of others singeing quills and hair off first. There is no right way, it just depends on your experience and how careful you want to be around the quills. Flipping a porcupine on their back to access their quill-less belly is what other predators such as mountain lions and fishers do in order to get a fatty meal.

After removing the quills, if you choose to do so, you can roast the porcupine whole over the fire or butcher as you desire prior to cooking. Some cultures and primitive skills practitioners will also bury the whole porcupine in a pit of coals to roast, steaming it overnight and waking up to a delectable meal. Skinning and quartering, as you would many other animals, and making a stew is also a great and simple processing method. At home, you can cook porcupine much like you would venison or small game. It’s versatile and delicious.

Regardless of whether you’re in a survival situation, you’ll want to eat everything, especially the organs and brain. I like to fry up the liver, heart, kidneys, and lungs with some fat and eat them first. Talk about a breakfast of champions!

May your fingers be fatty after your quest for the delicious quill pig.

Want to learn more valuable skills for staying alive in the woods? Pick up a copy of our MeatEater Guide to Wilderness Skills and Survival.

This minimalist style chest rig is compact and designed to be worn high on your chest keeping it easily accessible and extremely versatile.

These have become one of Steve’s favorite hunting pants. They’re comfortable and tough and stand up to hard backcountry use.

'Every Chunk of Rabbit:' A Tribute to Ursula

For as long as I knew her, she was ready to die. Damn her. No one treasured work, love, laughter, family, and devotion more than she did. But for her last 30-plus years, if the bucket were sitting there, you knew she would kick it without fear. Loved ones saw no bravado in her attitude. That was just her way. She knew life and death to be impartial, and that once she passed 60, she “dasn’t” ask for much more, lest she appear ungrateful. But she...

A MeatEater Christmas: The Best Gifts We’ve Ever Received

As Christmas draws near, we at MeatEater are reflecting on the best gifts we’ve ever received. What you’ll find below is a compilation of some of our favorite December 25 memories. We wanted to bring you something different this holiday season, rather than another worn-out gift guide. “Out of all the of gifts my father gave me as a young hunter and angler, the best was an extremely well-used, sporterized, Czech army Mauser rebarreled to .30-0...

Skunting: The Ancient Art of Hunting on Skis

Post-holing through knee-deep snow is the preferred method of winter hunting in America. On the other hand, skiing is generally embraced by those who lap groomed runs until the legs give out or the après booze starts flowing. There's nothing wrong with this contemporary version of skiing, but it's poles apart from the sport’s original purpose—a tool for traveling, warring, and hunting. Origins of Skiing and Ski Hunting The Chinese, Russians, and...