How to Hunt Scaled Quail

Pale gray overall, with a distinctive scaled pattern on the neck, chest and underside.  This species lacks a plume but does have a crest that resembles a tuft of cotton, hence the commonly used nickname.

Breeding occurs from April through September, depending on location, two broods are often produced in a single season.  The female lays 9-16 eggs.

Scaled Quail Diet
Feeds on insects, seeds from mesquite and ragweed, and also agricultural grains such as sunflower, sorghum, and corn. 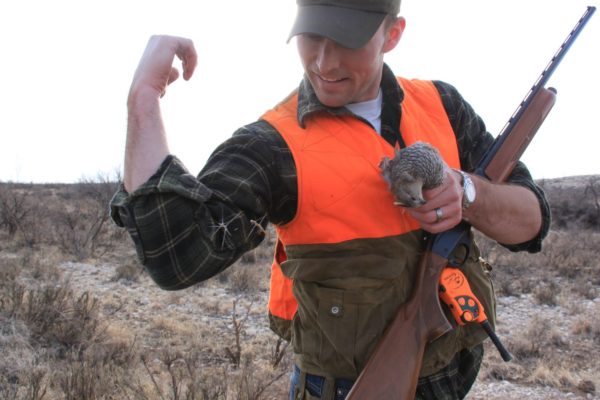 Hunting Methods
Populations of scaled quail are subject to rainfall, with a series of dry years being devastating to the birds. Typically, look for the birds in the vicinity of water, which they will visit daily. If you see fresh tracks but no birds near water sources, hunt the surrounding cover. Scaled quail will travel long distances when stressed, but are usually homebodies that can be located with methodical searching once you find the general area where they are hanging out.

Often, the birds will find overhead shelter by tucking themselves beneath cacti, yucca plants, or even old farm equipment or other debris left by humans. They are runners, and sometimes seem almost unable to fly. Many hunters prefer to use wide-ranging breeds of pointing dogs, which have a chance of running these birds down.

A truly talented dog might turn the birds and herd them back in your direction, but that’s asking a lot of a dog. Another way to deal with running scaled quail is to place other hunters along routes that might be used by fleeing quail. Often, they will flush when they encounter an unexpected “stander.”

Use 7 ½ or 8 shot fired from an improved cylinder or modified chokes.

How to Hunt Mountain Quail

Mountain quail are found in the mountainous regions of the West Coast, from northern Baja to Washington and eastward into Idaho. They prefer thick, brushy mountainous areas ranging in elevation from 2,000 feet to 10,000 feet. Mountain quail are the largest quail species. Identifiable by two long, straight plumes that jut slightly backward from top of head.  Gray-blue breast and neck, brown throat patch, and flanks that are heavily barred with...

A Guide to Hunting Western Quail

“Western” quail is an admittedly broad category, as it includes a total of five quail species that live west of the Mississippi, Gambel’s, valley, Mearns, scaled, and mountain. To the newcomer, distinguishing the various western quail species is made somewhat difficult by the confusion of common names. Two species share the common name “blue quail,” and several species are known by completely different names in different areas. What’s more, the...

A Guide to Hunting Sharp-Tailed Grouse

Sharp-tailed grouse are best known for their “leks,” or traditional breeding sites, whereas many 15 males will congregate on the wide open prairie to compete for female attention by strutting, cackling, and stomping their feet in a strangely synchronized dance. The spring breeding season isn’t the only time when sharp-tailed grouse will gather into large flocks. During the late fall and early winter, it’s not uncommon for hunters to flush flocks...