Mid-fall is setting in across the country. The vibrant greens in the landscape are now turning to yellow, orange, and brown hues across the mountain west and midwestern prairies. It’s time to get your favorite gun dog out of the kennel and out into the field.

What can upland hunters expect this year other than long walks? To help answer this question it’s always a good idea to look at data and insights offered up by organizations like Pheasants Forever and various state entities. The reported numbers from 2017, winter and spring conditions and 2018 roadside counts are key pieces of information in building a forecast of what conditions will be like as things get started. Check out this state-by-state guide to hot spots and habitat health. 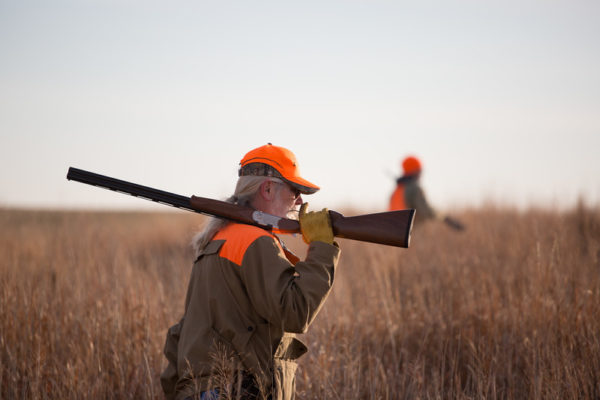 South Dakota
It’s of no surprise that South Dakota is on top of the list for 2018. The state’s Game Fish and Parks office proudly boasts, “Without a doubt, South Dakota is the pheasant hunting capital of the world.” The nearly $209 million dollars spent in the state for pheasant season and the reported 828,707 roosters shot help to substantiate that claim.

The winter to spring and early summer transition in South Dakota helped the pheasant population increase across the state. Especially the abnormally warm May, which helped the nesting and habitat cover growth.

If you’re coming to the state on a DIY pheasant hunt, you’re in luck. South Dakota boasts 1.1 million acres of public hunting land, with the new addition of 39,000 acres place in Walk-in Area (WIA). The report claims approximately 20 percent of the state’s CRP acreage is enrolled in the WIA program, directly in the heart of the state’s pheasant range. We reached out to zero in on specific locations for quality hunting with public access, and Pheasants Forever representatives we’re happy to oblige.

Brown County – The combination of walk-in hunting lands, augmented by the new Community-Based Habitat & Access program, puts the Aberdeen area at the top of the list. Marshall and Day Counties to the east are also loaded with public access.

Hughes County – The sprawling Medicine Knoll Creek public area is the centerpiece of state Game Production Areas in the region.

Kansas
Kansas led the nation in quail harvests and was a close second for pheasant in 2017. Numbers have slipped slightly for 2018, yet not nearly enough for the state to slip out of the top three mentions. Even the greater prairie chicken shows reports of holding strong in the Northern High Plains and Smoky Hills region. This will be another strong year for upland hunting in Kansas.

Kansas experienced an abnormally dry winter, followed up with heavy rains, especially in the western portions of the state. The 2018 KS Upland forecast reports these storms helped to provide the moisture to grow cover habitat, but also flooded out nests when broods were young. These conditions were the main culprit for the slight dip in numbers across the prairie state. The silver lining is increased vegetation growth from late spring storms that allowed a successful survival rate among the young.

Kansas holds strong public hunting opportunities, similar to South Dakota. Nearly 1.2 million acres of public Walk-In Hunting Areas (WIHA) are available, with CRP fields comprising of a large percentage of those acres. The strong upland numbers and hunting availabilities give no reason to not hit the fields.

The best hunting with public access will be in the Smokey Hills Region. “This area has had the highest density of both pheasants and quail last 3 years,” said Jeff Prendergast, KS Small Game Specialist. “The Smokey Hills region has a very good density if WIHA and provides a good opportunity for a mixed bag of birds, with annually the best density of prairie chicken in the state.”

Nebraska
No surprise to anyone, Nebraska makes the top upland list as well. The Cornhusker state has felt similar conditions as the southern bordering state Kansas. A slight reduction in upland bird numbers felt from 2017, yet still holding strong.  “I’ve heard some encouraging news from staff seeing broods out in the field,” reports Jeff Lusk, Upland Game Program Manager with the Nebraska Game and Parks Commission (NGPC), “but most reports seem to corroborate our survey results: somewhat lower pheasant abundance compared to last year, but still better than the 5-year average in several regions, including the Southwest and Panhandle.”

A late spring snowstorm hit Nebraska in early April. This potentially pushed back breeding conditions to later in the month and early May. Normal rain showers through the summer revived a normality and allowed for proper habitat vegetation. A blessing for the breeding season and young to hide in the concealment, leading to considerable numbers.

“NGPC also has an extensive network of private land that has been leased for public hunting through the Open Fields and Waters Program (OFW). An interactive map of these publicly accessible private lands is available on the NGPC website,” says Lusk. “The Panhandle and Southwest regions will again provide the best opportunities for pheasants, with public land access higher in the Southwest,” says Lusk. “Indices were higher than their 5-year means in the Panhandle, Sandhills, and Southwest, indicating harvest opportunities in those areas should be better than typical over the past 5 years.” (Pheasants Forever)

For those DIYer’s getting after public land hunting opportunities, make sure you head to SW and the Panhandle regions of Nebraska. The counties to pay attention to are Hitchcock, Hayes, Red Willow, Sheridan, and Banner.

Upland Game Bird Hunting: A Rookie in the Field

As a relatively new hunter, it’s exciting to engage in conversation about the subject. Much like the days when I was new to fishing, now I light up at even the slightest chance to talk about deer, archery, and recipes. In each discussion with fellow outdoorsmen and women, I learn something new. Animal behavior, opinions on ethics, history, cooking methods… but it’s the fascinating discussion about “why we do it” that interests me the most...

On this hunt, Steve meets up with his longtime friend and upland bird hunter extraordinaire, Ronny Boehme, to search for an icon of the American West, the sage grouse. But before they start hunting, they’ll discuss the conservation issues surrounding this embattled species with the governor of Wyoming, Matt Mead. Out in the field, Ronny’s best dogs are there to help the two find a big, mysterious game bird that’s hiding out there somewhere in the...

Words by Joseph Furia A favorite saying of chukar hunters is “the first time you hunt chukar is for fun, every time after that is for revenge.” For those of you who fly fish for steelhead or bow hunt for elk, you’ll recognize similar frustration and satisfaction of stacking the odds against yourself, failing most of the time, and then basking in the euphoria of those moments of success. It’s more about hunting than shooting. Most public land...