What You Need to Know About Shotgun Shells

A new hunter walking into the store can be overwhelmed with the obscene amount of options on the shelf for shotgun shells. There are countless options to choose from and many people may not know where to start their search for what shells to buy. Here is a summary of what you need to know about shotgun shells.

Shot refers to the pellets, projectiles, inside a shotgun shell. Shot is categorized with an inverse naming system, in which smaller-sized shot carries a larger number. Though there are smaller shot sizes on the market, #8 is the smallest shot commonly used by hunters. It has a diameter of just .080” and is used with great effect by dove and quail hunters.  You can calculate the diameter of shot sizes by subtracting the shot-size number from 17 and then divide that by 100. Hence, 17-8 = 9, or .09”.

Below is a general overview of shot size, with information about the game each should be used for.

Lead vs. Nontoxic
For upland birds and small furred game, most hunters regard lead as the go-to material for shot. It’s heavy and soft, so it retains energy well and flattens on impact. It drops game very efficiently. However, lead shot is illegal for hunting waterfowl, and for good reason. Ducks and geese will both purposely and inadvertently consume spent pellets while feeding. This can cause lead poisoning. Therefore, what’s known as non-toxic shot is federally mandated for all waterfowl hunting. On the state level, lead restrictions sometimes apply for other forms of hunting as well, so pay careful attention to your state’s hunting regulations.

Steel is the most common form of non-toxic shot, though it’s lighter and harder than lead and does not work as effectively in side-by-side comparisons. Other non-toxic materials include bismuth and tungsten, which are heavier than steel and are more comparable to lead shot.

However, these metals are more expensive than steel, and also harder. They require a thicker wad to protect the shotgun’s barrel from damage, which results in less room for pellets within the shot shell.

So what’s the hunter to do? Buy the best waterfowl loads you can afford. If that happens to be steel shot, so be it. Far more ducks are taken with steel shot every year than all other forms of non-toxic shot combined.

Buckshot
While not generally used for small game, buckshot warrants a quick mention since we’re on the topic of shot size. Buckshots pellets are large enough that they need to be carefully stacked inside the casing rather than just poured in.

A 2 ¾” 12-gauge shell loaded with 00 Buckshot will hold just nine balls; the same shell can accommodate upwards of four-hundred #7 pellets. Once popular for deer hunting in the United States, buckshot has been almost completely eclipsed by single-projectile loads called slugs. Here’s a chart of buckshot sizes; note that the smallest, #4 Buck, is .01” larger than FF.

Shot and Powder Amount
Besides the length of the shell and the size and material of the shot, there are two other considerations to keep in mind when buying shotshells, the amount of shot and the amount of powder. Shot is measured in ounces. 12-gauge loads for general purpose small-game hunting typically carry 1 ounce of lead shot, while  12-gauge loads for long-range waterfowl shooting might carry 1 ⅜ ounces of steel shot.

Powder is measured in either drams or, in a roundabout way, by the muzzle velocity of the discharged load. The dram is an archaic unit of measurement equally 1/16 of an ounce. It long served as the standard unit of measurement for blackpowder. With the advent of modern smokeless powders, which vary in weight, ammunition manufacturers began publishing their powder charges in terms of dram equivalents. That is, a modern shotgun shell listed as having 3 drams of powder actually has a load of propellant equivalent in energy to 3 drams of black powder. 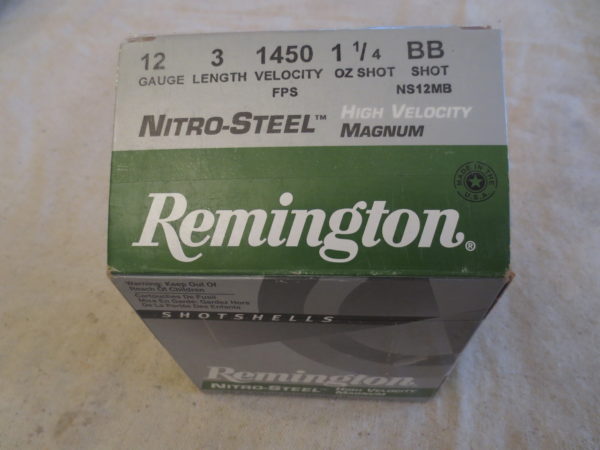 A shotshell box top should tell you everything you need to know about the ammo inside. Deciphering the information can be tricky, but it’s essential that you learn what everything means in order to select the proper loads for your particular applications.

What You Need to Know About Hunting Packs

Of all the forms of hunting discussed in these pages, backcountry hunting is far and away the most...

Of all the forms of hunting discussed in these pages, backcountry hunting is far and away the most...

What You Need to Know About Hunting Boots

I’ve seen more hunts ruined by foot problems than any other cause, problems such as blisters, sore...

I’ve seen more hunts ruined by foot problems than any other cause, problems such as blisters, sore...

What You Need to Know About Hunting Binoculars

Good hunting binoculars should provide you a crystal clear image of whatever you’re looking at, be...

Good hunting binoculars should provide you a crystal clear image of whatever you’re looking at, be...