Southeast Alaska is one of the MeatEater team’s favorite trophy country destinations. The coastal mainland and islands here are daunting and unforgiving, but also beautiful and generous. Comprised of dense rainforests, alpine high country, and endless stretches of rugged, undeveloped coastline, much of Southeast Alaska’s trophy country is extremely remote. But unlike much of interior Alaska, this area is relatively easy to reach for hunters from the lower 48. Best of all, you could spend a lifetime exploring the massive tracts of public land and water here and still not scratch the surface. 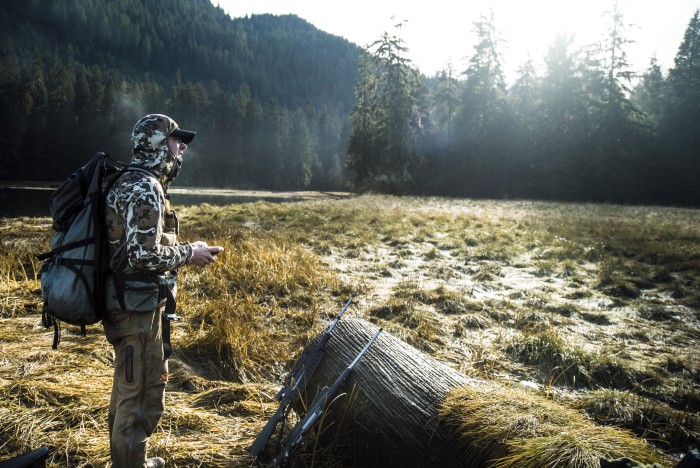 The area generally referred to by Alaskans as “Southeast” comprises the coastal region roughly from Haines and Juneau in the north down to the southern terminus of the state near Ketchikan. The Inside Passage snakes its way between mainland Alaska and the many islands along the coast. Some of the larger islands include Prince of Wales, Sitka, Admiralty and Chichagof. There are countless smaller islands. The larger communities like Ketchikan, Juneau and Sitka are good places to stage hunting and fishing trips to more remote locations.

The entirety of Southeast Alaska is largely dominated by the public lands of the Tongass National Forest. The Tongass was established well over 100 years ago and offers hunters and anglers over 17 million acres of public grounds. It is our nation’s largest national forest. The terrain here rises steeply from tidal coves and grassy beaches up into the thick rainforest and then up to the alpine meadows and rocky crags of the high country. Thousands of creeks and rivers flow into the ocean here. Access to hunting and fishing grounds varies widely in the Tongass. In some areas, hunters can drive road systems built for the extraction of timber. In other areas, the only access is by boat or floatplane. Do-it-yourself hunters and anglers can base themselves out of a town, set up a backcountry camp, or reserve one of the many Forest Service cabins available in the region. Renting a skiff allows hunters and anglers to access otherwise unreachable territory. Because of the sheer volume of small islands and endless miles of coastline, it’s not hard to find your own piece of country, where, over the course of a week, you might only see the occasional float plane ferrying other hunters and fishermen.

This portion of Alaska offers hunters and anglers a wide array of freezer filling options. The most popular big game species here are Sitka blacktail deer and black bears. Deer tags are available over-the-counter and, in most cases, hunters can kill multiple blacktails. The deer hunting season here is long. Hunters can hike to bucks living in high, alpine meadows in late summer and in early fall and use boats to find deer migrating down to the tidal zone as winter approaches. Black bears are abundant. Tags are allocated over-the-counter in some units; in others they are issued through a draw system for non-resident hunters. There are spring and fall seasons. Moose and mountain goats are present in some areas of Southeast Alaska but hunting opportunities are limited. Small game species include sooty grouse, ptarmigan, and in some areas, snowshoe hares. Waterfowl hunters enjoy early seasons and a dizzying variety of ducks and geese. 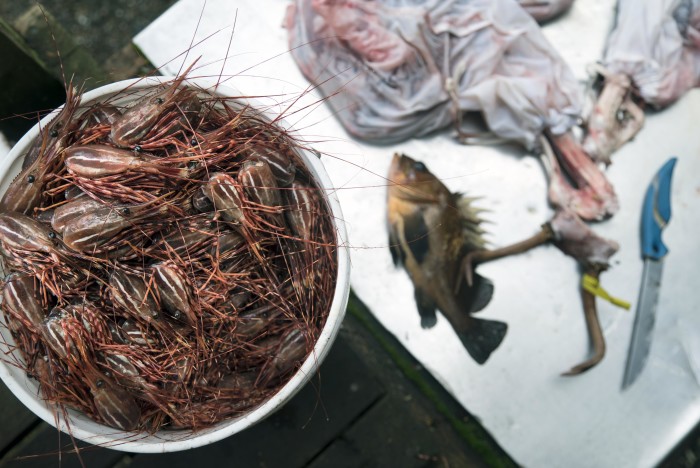 The open ocean, protected coves, tidal estuaries, and flowing streams of Southeast Alaska are also trophy country. And no matter where or what you’re hunting here, there are good fishing opportunities nearby. Rainbow trout, cutthroat trout, grayling and dolly varden are common freshwater species. Five species of Pacific salmon spawn during summer and early fall. They can be caught in the ocean and in their freshwater spawning streams. Kings and sockeyes spawn in early summer, followed by pinks and chums, and silvers run in late summer and early fall. Other fine-eating saltwater fish include halibut, a wide variety of rockfish, and lingcod. Recreational anglers can also set pots for shrimp and crab. Clams, mussels and scallops are also on the menu. Southeast Alaska is a virtual wild seafood buffet.
There’s plenty of other wildlife here for that very reason. Humpback whales follow schools of herring. Orcas hunt schools of salmon in the ocean and wolves join the bears that target salmon spawning in small creeks. Seals and sea otters rest on virtually every small, rocky island between meals of fish and crabs. Sea birds, eagles, and ospreys are a constant presence. Keep in mind, some areas of Southeast Alaska have dense populations of grizzly bears while on certain islands, grizzlies are not present at all. Even if the hunting or fishing is slow, there is always something new to see in Southeast Alaska. 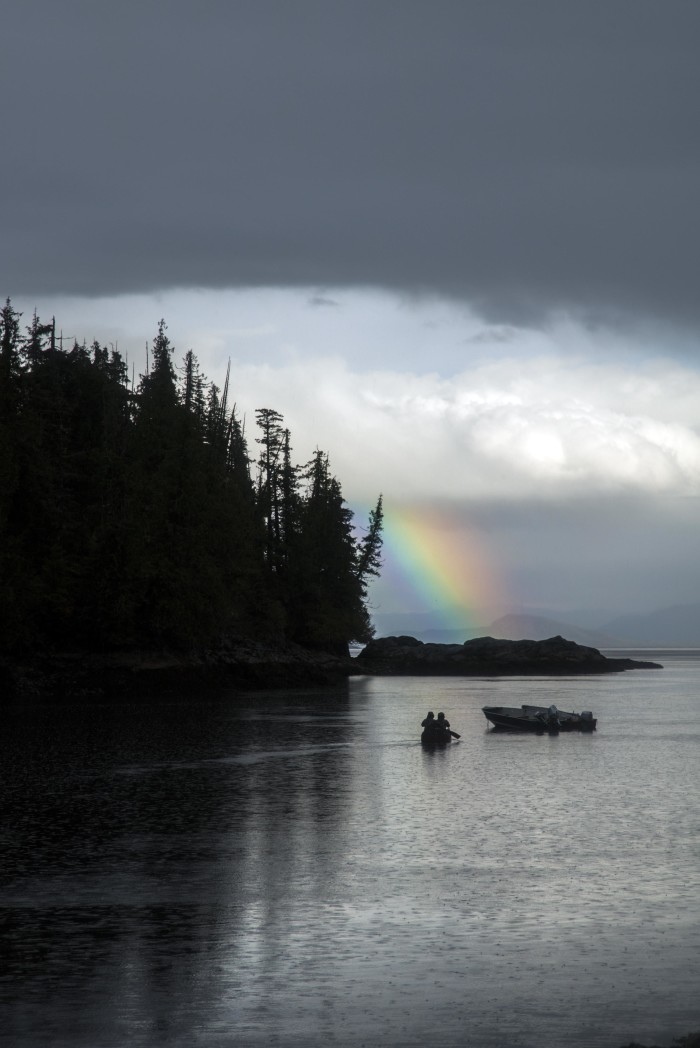 Be prepared for extremely nasty weather.  Count your blessings if you experience more than a day or two of sunny weather during a week-long trip. It’s a very wet place and rain is a constant companion here. Some years see over two hundred inches of rain. June and July are the driest months while October and November are the wettest. Temperatures are generally fairly mild by Alaska standards. But if you don’t have the best rain gear available, you’ll get cold and wet and you’ll stay cold and wet. Bring waders, lightweight packable raingear, and consider the heavier, rubberized rain gear and gloves that commercial fishermen favor for truly nasty weather days. Use large dry bags to keep sleeping bags, extra clothing, and gear protected from moisture. Clean and oil your guns and wash your fishing gear with fresh water to prevent damage from the salty environment. Cell phone service is spotty so consider renting a satellite phone in case of
an emergency.
Southeast Alaska is the kind of mysterious place that keeps calling you back. You might suffer during grueling hikes over massive, fallen cedars and up slippery ravines. You also might curse your luck during endless days of fog and rain. But, once you’ve been there, it’s a sure thing that you’ll be back for the fishing, hunting and otherworldly scenery of mountains rising out of the ocean.
http://www.adfg.alaska.gov/index.cfm?adfg=SportByAreasoutheast.main
http://www.adfg.alaska.gov/index.cfm?adfg=hunting.whenwhere

Shop All
Save this product
Benchmade
Steep Country Knife
$162.00
A versatile fixed-blade capable of performing throughout any season, on any species.
Shop Now
Save this product
Vortex Optics
Diamondback HD Binoculars 10x42
$249.99
Rock-solid optic that optically punches high above its class.
Shop Now
Save this product
Vortex Optics
Razor HD LHT 3-15x42 Riflescope
$1299.99
"The LHT has become my go-to scope for nearly every hunt. It’s lightweight for easy backcountry carry, yet has the glass quality and exposed turrets for precision shooting from sunup to sundown." - Janis Putelis
Shop Now
Coming Soon
Save this product
FHF Gear
FOB Bino Harness
$185.00
The FOB Bino harness is a fully enclosed forward-operating bino harness, that serves as a secure location for binoculars and other critical gear during your outdoor pursuits.
Shop Now
Get the latest in your inbox
Subscribe to our newsletters to receive regular emails with hand-picked content, gear recommendations, and special deals.
Our picks for the week's best content and gear
For the whitetail obsessed, with Mark Kenyon
Redefining our connection to food, with Danielle Prewett
Your one-stop for everything waterfowl, with Sean Weaver
Get out on the water with the MeatEater Fishing crew
Technical hunting apparel
Purpose-built accessories for hunting and fishing
Quality elk, turkey, waterfowl, and deer calls
Privacy Policy

On this hunt, Steve’s friend and former MeatEater producer, Morgan “Mo” Fallon, joins Steve at his remote fishing shack on Prince of Wales Island. Here, they search for a variety of wild fish and game. From spot prawns deep in the ocean to blacktail deer high in the alpine, there’s no shortage of food available during late summer in southeast Alaska. But nothing comes easy here and they’ll have to earn their meals. Gear Used On This Hunt...

Ask MeatEater: How Do You Make a Skull Mount?

For thousands of years, hunters have been mounting antlers, horns and all manner of animal skulls on their walls to celebrate the memory of a successful hunt. For many hunters, that requires a trip to the taxidermist. At MeatEater, we appreciate shoulder and full body mounts but for displaying trophies in our homes, a lot of us prefer making our own European skull mounts, or “freedom mounts,” as Steven Rinella likes to call them. Since we get so...

Video of the Day: Shane Mahoney on Hunting’s Increasing Relevance In Modern Life

By Mark Kenyon “All social trends eventually bend back on themselves.” So says Shane Mahoney in today’s Video of the Day, a short film created by the Rocky Mountain Elk Foundation taken from a recent address at the 2017 RMEF National Convention. In this piece the always captivating Mahoney discusses the shifting relevance of hunting in the modern world  and how new trends are pushing our lifestyle back into the foreground. It’s a beautifully done...