This is the first article in the new MeatEater Trophy Country series. The Trophy Country column will showcase some of the best public land hunting and fishing locations in the United States.
At MeatEater, the places we hunt and fish are as important to us as the fish and game we pursue. The search for Trophy Country leads us to some of America’s wildest places, where hunters and anglers can experience a true backcountry adventure on public land that is open to every American. In these places, it’s possible to go back in time and find natural landscapes, plentiful wildlife, and complete solitude. The Missouri River Breaks in northcentral Montana is one of those places.
The Breaks,  as locals call them, is some tough, unforgiving country.  The term “breaks” comes from the way the that the surrounding benchlands of the Great Plains seem to fall, or break away, into the deeply incised canyons and coulees of the Missouri River. At first glance, the landscape can seem inhospitable and even alien. When the comedian Bryan Callen appeared on an episode of MeatEater that was filmed in the Breaks, he stepped out of the car at the boat launch and asked, “What the hell happened to this place?” The answer is, almost nothing.
Originally inhabited by several Native American tribes and later discovered by French fur trappers, the area has remained much the same as it was since Meriwether Lewis and William Clark traveled up the river 200 years ago.  Cottonwood riparian habitat lies along the valley floor, directly below the steep bluffs and canyons that give the area its name. Higher up, timbered slopes give way to grassy meadows and open sage flats. 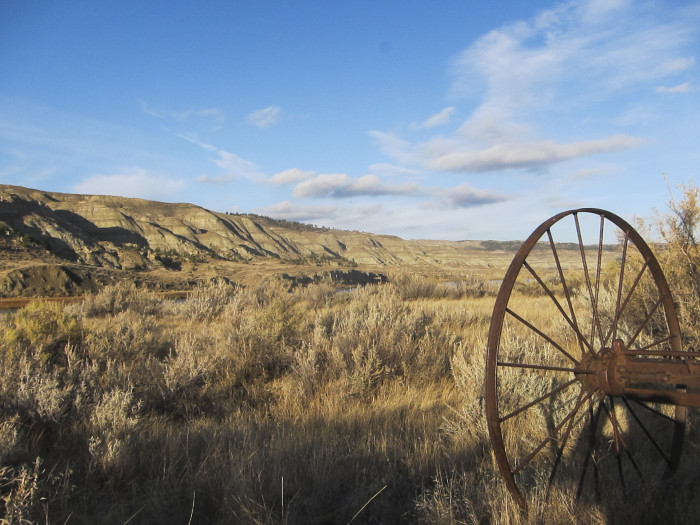 For those who know how to find it, the area is rich with game and other wildlife. Over sixty species of mammals and dozens of species of birds, fish, reptiles and amphibians inhabit the Breaks. One of six remaining wild populations of paddlefish thrive here in the Missouri River along with soft-shelled turtles and rare shovel-nosed and pallid sturgeon. Mountain lions and coyotes roam the canyons while burrowing owls and sage grouse nest in the open meadows above the river. Wildlife viewing opportunities are unlimited in the Breaks.
For hunters and anglers, there are plenty of wild game and fish species to target in the Breaks. The Missouri River is home to a variety of game fish including trout, sauger, walleye, pike, smallmouth bass, channel catfish, drum and paddlefish. Upland bird hunting is excellent for pheasants, hungarian partridge and sharptail grouse. Waterfowl hunters will be happy to note that the Missouri River is a major migration corridor for ducks and geese. While wild turkeys aren’t native to this part of Montana, healthy populations of Merriam’s turkeys are now common and offer excellent hunting for unpressured birds. It doesn’t get much better for public lands big game hunting than in the Missouri River Breaks. There’s some good pronghorn antelope hunting in the open country of the Breaks. Mule deer numbers are very good here and some of the more remote canyons harbor giant bucks. Whitetail deer are also common in the cottonwood studded riparian areas along the river. Some of the biggest bull elk in Montana call the Breaks home. These tags aren’t easy to draw but it’s worth the wait. A Missouri River Breaks bighorn sheep tag is one of the most coveted big game licenses in the world. The Breaks consistently produce some of the biggest bighorn rams in the country but this once-in-a-lifetime tag may take twenty years or more to draw.
The Missouri River Breaks is a huge chunk of undeveloped land surrounding 150 miles of the National Wild and Scenic Upper Missouri River drainage in northcentral and northeastern Montana. The Breaks consists mostly of federally managed, publicly owned lands.  The Upper Missouri River Breaks National Monument is comprised of over 378,000 acres of public land and the Charles M. Russell National Wildlife Refuge consists of 1.1 million acres of accessible ground. The Bureau of Land Management also manages hundreds of thousands of acres of additional public lands in the Breaks  and there’s Montana state lands that offer access to hunters and anglers. The Missouri River Breaks between Fort Benton, Montana and Fort Peck Reservoir consists of more country than a hunter could explore in several lifetimes.
With so much accessible public land, the Breaks offer opportunities for all types of hunters. The Breaks can be accessed via road, trails and water.  It’s possible to do day hunts for upland birds and big game by driving maintained roads and unimproved four-wheel drive trails. But, because of the isolated location, setting up a basecamp for a few days provides more time to explore. Overnight camping is readily available in developed campgrounds and primitive campsites. Backpack hunters can find complete solitude  away from roads and trails. It’s possible to bushwack for miles into remote backcountry areas that rarely see human traffic. Perhaps one of the best ways to experience the Breaks is to float the river and camp along the water. Several public boat ramps allow access to the Missouri River for canoes, rafts or even jetboats. This opens up otherwise unreachable hunting and fishing locations.
Plan well and come prepared for a Missouri River Breaks hunt. The weather can change rapidly, especially in the fall, when it may be calm, sunny and seventy degrees one day and a howling blizzard the next. Many of the unimproved roads here become muddy and completely impassable with just a little rain.  There’s a good chance you’ll be a long ways from help if you’re stuck out in the field. Pack shelter, extra clothing, food and water and make sure someone knows where you’re planning on hunting.
The Missouri River Breaks is one of our country’s best hunting and fishing locations. It’s hard to find places that offer the huge variety of hunting and fishing opportunities, beautiful, rugged country and vast expanses of public land that can be found in the Breaks. Spend some time here and you’ll understand why we consider it one of our favorite pieces of Trophy Country.
Here’s some helpful links for planning a Missouri River Breaks trip.
https://www.blm.gov/programs/national-conservation-lands/montana-dakotas/upper-missouri-river-breaks
https://www.blm.gov/mt/st/en/fo/umrbnm/wildlife.html
https://www.blm.gov/mt/st/en/fo/umrbnm/plantrip/camping.print.html

Conservation Groups for Hunters and Anglers

Let’s face it, hunters and fishermen are under attack. The proposed budget from the White House would gut protections for wildlife habitat and clean air and water. Elsewhere in Washington, we’ve got powerful forces trying to “dispose” of our federally managed public land hunting and fishing grounds. At the same time, animal rights advocates continue to manipulate the court systems in their never-ending war against science-based management of our...