Historians, fans, and keyboard warriors will forever debate whether Wild Bill Hickok really held a pair of aces and eights—a “Dead Man’s Hand”—when he was murdered by Jack McCall on August 2, 1876. But there’s one thing no one denies about that infamous incident: Wild Bill had a gun on his hip.

Now, that gun is up for auction. Rock Island Auction will be accepting bids for Hickok’s famous Smith & Wesson Model No. 2 Army Revolver, which he was reportedly carrying at the time of his death. They anticipate the winning bid will land between $150,000 and $350,000, and the auction will take place between August 26 and August 28, 2022.

Given its age (and original owner) the gun looks to be in great condition. 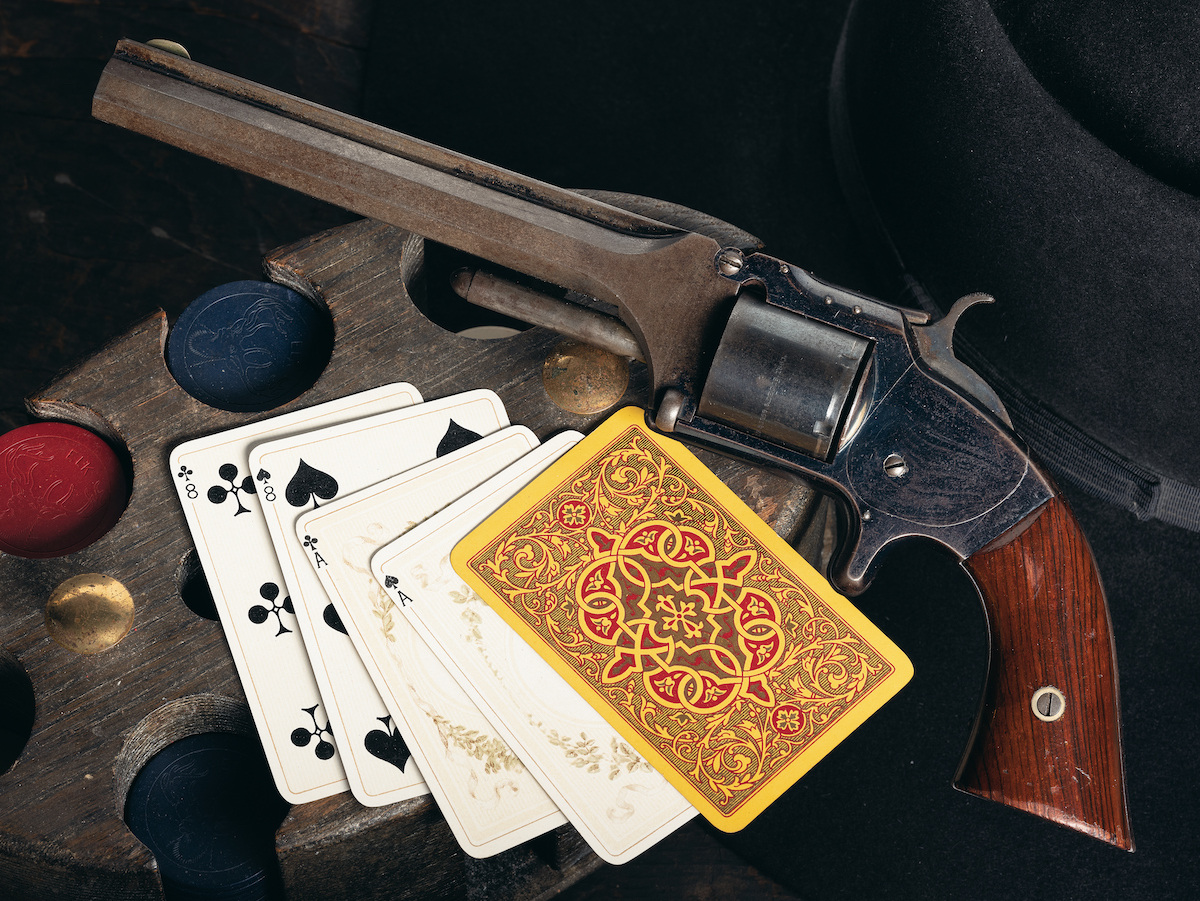 It’s chambered in 32 Rimfire, a now-defunct cartridge used in revolvers and rifles in the 19th and 20th centuries. Hickok owned a Model No. 2, and Rock Island includes with the gun excerpts from numerous historians and gun writers who say he was carrying one when he died.

The steel has retained over 50% of its original bluing with strong case colors on the hammer and a smooth gray-brown patina on the balance, according to the lot description. It also notes that the wear on the 6-inch barrel is consistent with being carried as a personal sidearm. The grips are “very fine” with mild wear, minor scratches, and attractive grain.

The revolver is equipped with a German silver blade fixed front sight, integral notch rear sight, and a smooth, six-shot cylinder marked with the S&W 1855, 1859 and 1860 patent dates around the center.

Hickok owned as many as 50 firearms in his life, according to Ed McGivern, but there’s good reason to believe this particular Model No. 2 was hidden somewhere on his person during that fateful poker game in Deadwood, South Dakota.

The most crucial piece of evidence comes on pages 302 and 303 of Ed McGivern’s book, “Fast and Fancy Revolver Shooting.” McGivern was a famously talented revolver shooter in the 1930s, and he visited Deadwood in 1932.

He learned that one of Hickok’s guns, “a Smith & Wesson,” was in the possession of a woman named Hazel Willoth. Hazel Willoth’s husband, Emil, was given the gun by Seth Bullock, who was Lawrence County’s first sheriff and the man likely responsible for investigating Hickok’s death.

“The Willoth gun is quite generally established as being one of Wild Bill's guns, and all reports seem to support such a claim convincingly,” McGivern states.

Included with the revolver is a 2013 affidavit signed by Leona H. Arder of St. Charles, Illinois. In her sworn statement, she explains that she personally knew JoAnn Willoth (the granddaughter of Emil Willoth), and she witnessed JoAnn give the revolver to Arder’s father, Leo Zymetzke. According to Arder, JoAnn gave the revolver to Zymetzke because she was an only child with no children, and so had no immediate family.

Arder’s grandson, Eric Hoppe, tried to sell the revolver at auction in 2013. However, even though the highest bidder offered $220,000, it did not meet Arder’s private reserve price, and the deal fell through. Rick Henley, Rock Island’s executive director of acquisitions, told MeatEater that the gun sold privately at some point after the auction.

You can find more details about the gun’s provenance on the Rock Island auction page.

Rock Island is also selling a Buffalo Bill presentation revolver, which is expected to go for $40,000 to $60,000. The Remington "Improved New Model Navy" revolver is inscribed "F. North, from Buffalo Bill" on the back strap and is accompanied by documentation from the descendants of Frank North. 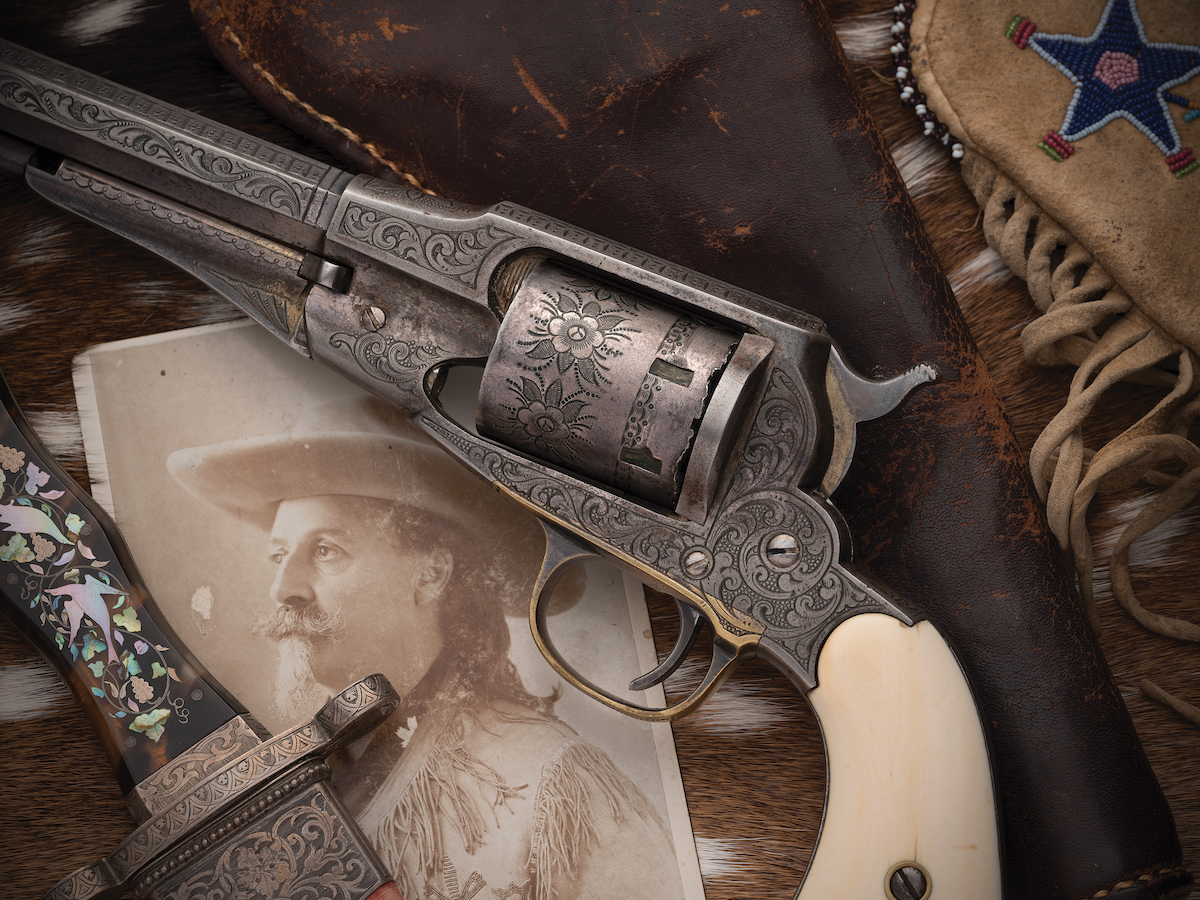 Several of Charles Gordon’s firearms are also being auctioned. Gordon was a wealthy Scottish landowner in the late 19th and early 20th centuries. He amassed an infamous collection of firearms from some of the finest gun makers in England. But he never fired any of them, and many were fitted with obsolete technology like flint locks and percussion caps.

He spent over 10,000 pounds—a small fortune— purchasing nearly 300 firearms in a gun-buying spree between 1868 and 1906, according to Holt’s Auctioneers. He spent so much money on guns he nearly bankrupted his estate. His half-sisters eventually petitioned a court to take control of his affairs, and they sold his firearms for pennies on the dollar.

"The LHT has become my go-to scope for nearly every hunt. It’s lightweight for easy backcountry carry, yet has the glass quality and exposed turrets for precision shooting from sunup to sundown." - Janis Putelis

Movie Guns that Made Their Characters

A firearm, when paired with the right character and actor, can become more iconic than the movie itself. Sometimes it’s a happy accident, sometimes it’s a carefully considered plan, but when it clicks, pop culture doesn’t forget. The character and gun become inseparable. These are some of the most iconic guns to ever grace the big screen. “Dirty Harry” Callahan | Smith & Wesson Model 29 Revolver What would Dirty Harry be without his hand cannon...

The 5 Guns Every Hunter Should Own

We know you already have a list in mind. This is how we came up with ours. Coverage is the name of the game. These five firearms allow hunters to pursue everything from wingshooting to small game to big game. The calibers we chose are relatively common and inexpensive, but also panic-proof. If you’ve visited a sporting goods store lately, you know it’s a good idea to have guns not chambered in any of the common self-defense calibers. With all...

The Guns of MeatEater Season 10, Part 2

Part 2 of MeatEater Season 10 was perhaps our most diverse release yet, taking us everywhere from South Carolina to Hawaii. We filled coolers with some very cool fish and game. However, unlike other seasons, we didn’t use a ton of firearms on this round of shows. The ones we did use, however, are my standard go-to weapons for most of my hunts. Weatherby Mark V Weathermark LT If you happened to watch Part 1 of Season 10, you saw my .300 Win. Mag...