Kodiak December: A Hunt and a Blacktail of a Lifetime

I’d just strapped knee-high gaiters over my boots in the bunk-lined forecastle when a rifle shot rang out from the bow deck directly above my head. After settling my heart rate I climbed into the F/V Kylia’s tophouse to hear what happened. It was 9:00 a.m., but the pale pink late November sunrise had only begun to define Kodiak’s colossal mountains and beachheads. Just enough light in fact, for Kris to spot a three-point Sitka blacktail wandering the coastline while he waited for Paul, Megan and I to assemble our daypacks for the run ashore. 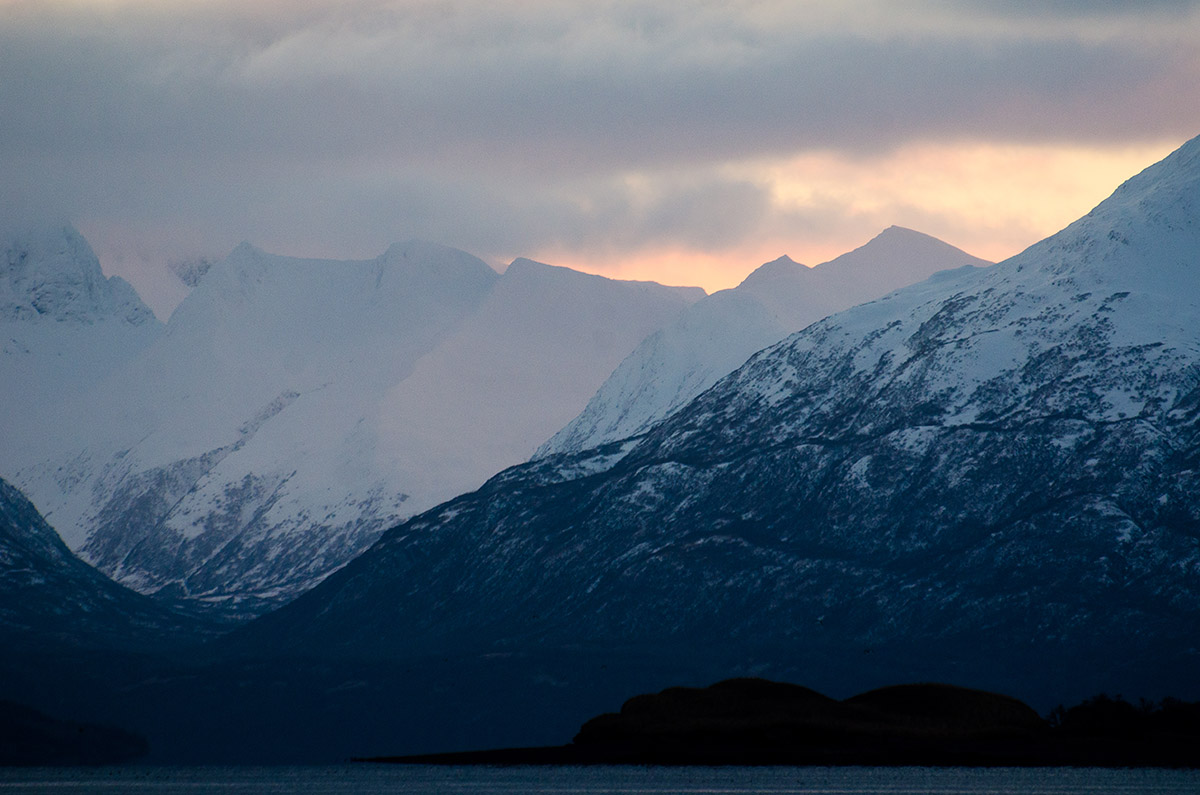 Kris offered me first ferry to the outer island to play photographer and help load a dead deer in the Achilles inflatable skiff. He took his buck to the seiner then shuttled Paul and Megan. Battling colon and liver cancer and just off six months of chemotherapy, for K-Money that was plenty of adventure. All things legal, he’d stick with the sweatpants. Same for Jeff and Steve, Paul’s father and uncle. Why go alternately sweat and freeze your butt off when Alaska allows you to take deer in this unit from a stopped boat with the engine off?

I knew why, but we all hunt for different reasons. We all have different capabilities. A medieval copse of gnarled cottonwoods lay before us. Paul, Megan and I set forth, irrepressible to experience this mysterious place. 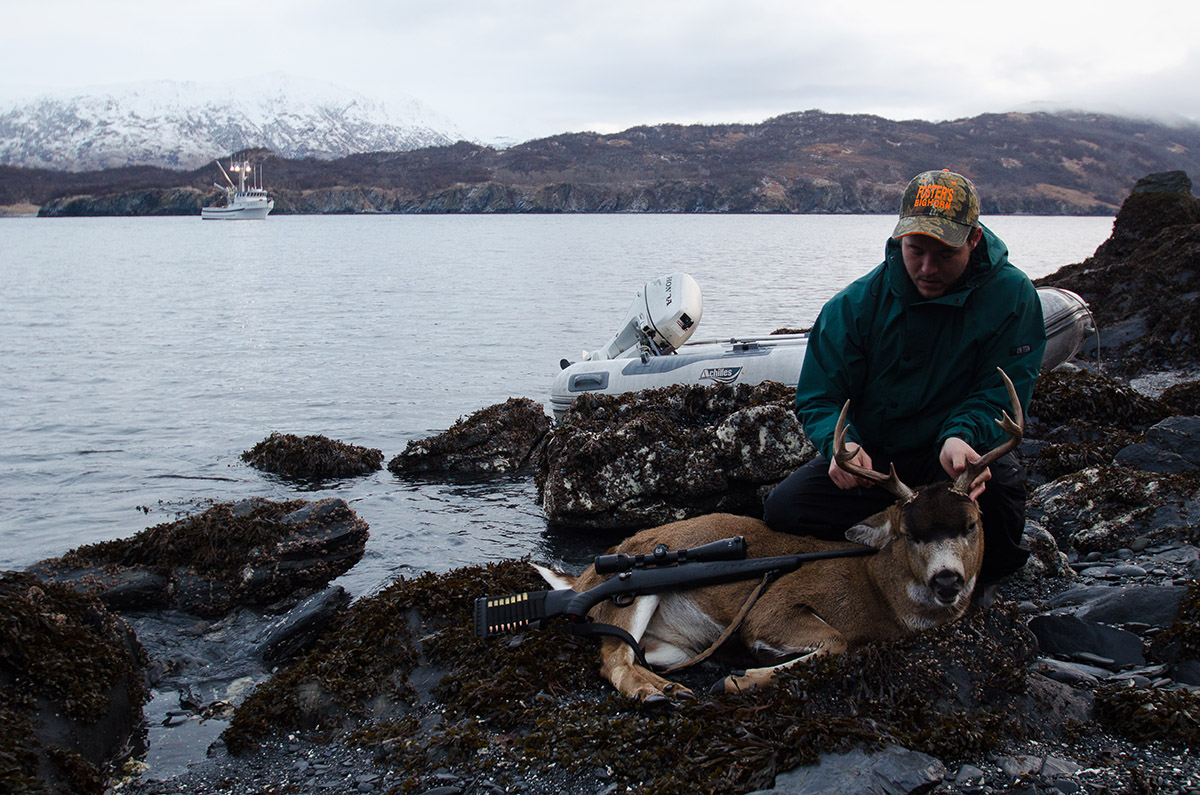 Within a half mile we saw blacktails filtering away as we moved too eagerly across frosty ground. A few near-shot opportunities for Megan came and went as we slowed and the cottonwoods spaced out. But Paul wanted to keep moving. He’d heard of open park country up higher, below the crags.

Paul had been living in Kodiak for five years, managing a seafood processing plant. Dan, the skipper of the 58-foot Kylia and one of Paul’s top salmon seiners, offered to help us put a trip together that allowed for various hunting styles. With access by sea and Dan’s lifetime of knowledge of the island, it was an opportunity we couldn’t pass up. We set off after Thanksgiving with crab pots, halibut rods, shotguns, rifles and up to three deer tags a piece. Like mountain goats, elk, caribou and bison, the diminutive blacktailed deer is not native to the Kodiak Archipelago and hunting regulations are quite liberal. 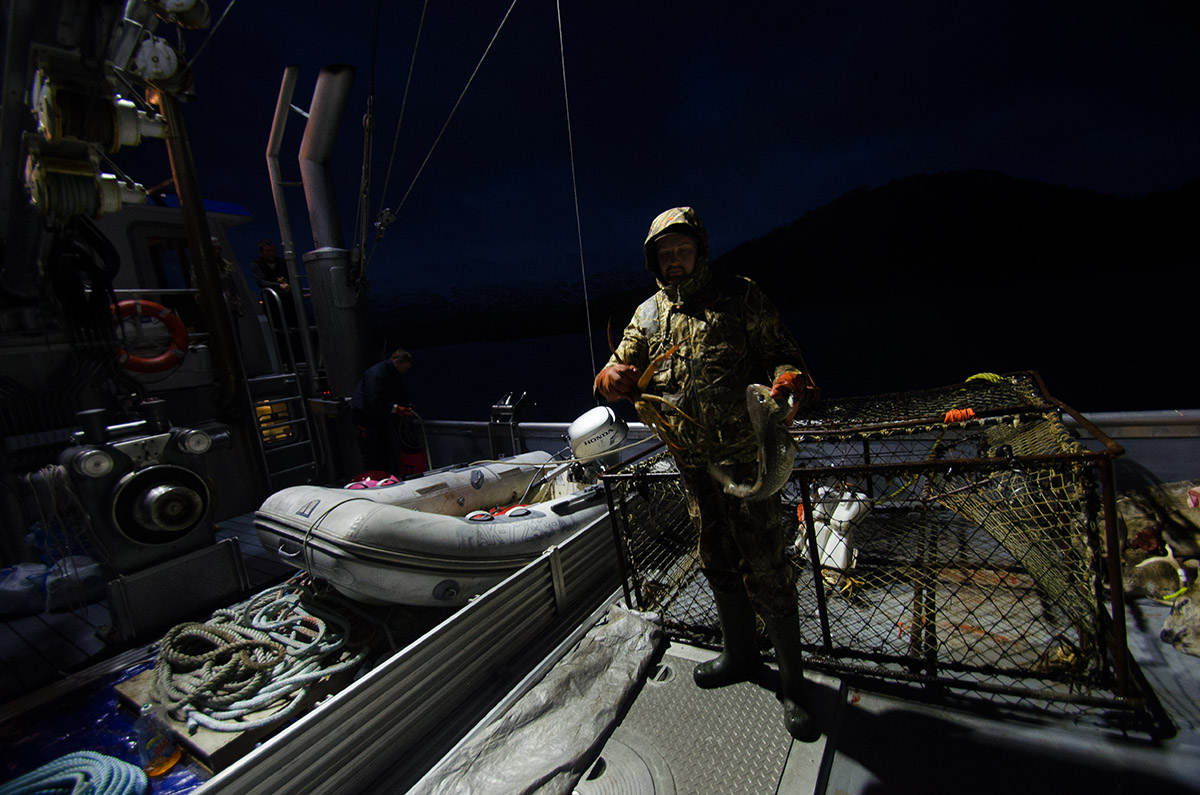 Paul, Megan and I gained a tall ridgeline only to have it peter out, but got a view of the escarpment defining the southern end of the island. Paul glassed a buck on the next ridge and shortly after I found the refilled pit where a brown bear had cached a meal – probably the same kind we were after. We dropped down through a half-frozen swamp and started up the long slope to where we believed these meadowlands lay.

Eventually we crested a knoll and the country broke open ahead; broad meadows, mature timber stands, marshy bottoms. Ideal. We sat down to glass as a misty drizzle began.

The day had dawned cold and clear but warmed into the afternoon under thin cloud cover. Crunchy ground became soft, the grass wet and flattened from recent snow. Light rain concealed what little sound remained. I’d made no secret of my urge to still-hunt alone on the approach but Paul, my hunting buddy since adolescence, reined me in, promising better country up high. Now up high and immediately sick of glassing in the rain, I walked over to the Gore-tex-clad couple.

Into the wind and noiseless on the soggy ground I went, encountering does at close range in minutes. I soon came above a meadow I was sure my companions would push deer through. Moments later, a three-point like the one I’d killed yesterday flitted through giant cottonwoods at the far edge. I followed.

Across the meadow and into the trees, I bumped into a doe and fawn at 20 yards. The curious fawn cocked her head and began walking toward me. I didn’t move and she lost interest at 8 yards, veering off to a tasty clump of grass. Not wanting to disturb the pair I looped around to my left. Barely past them I came around a stand of trees, froze, then dropped to a knee, throwing rifle to shoulder.

As the buck came into foggy view I realized my alarm had been premature. The silhouetted clump of antlers merging straight to ear tips was indeed straight on, but he faced away instead of toward. I also noticed he was bedded, resting under a twisted old willow.

I crept closer, bringing the buck’s body into view at a kneel. With six inches of back showing above the tree roots, I knew if he rose and took a step I’d lose my shot window forever. I nestled my elbow into my thigh, held on his spine and tapped it. The buck rolled out of sight.

I moved to get a view and saw the blacktail thrash his last, rearing his head to show a bladed, four-by-four frame plus tall eyeguards, with a inline fifth point between the right forks. I fell to my knees to await his passing. 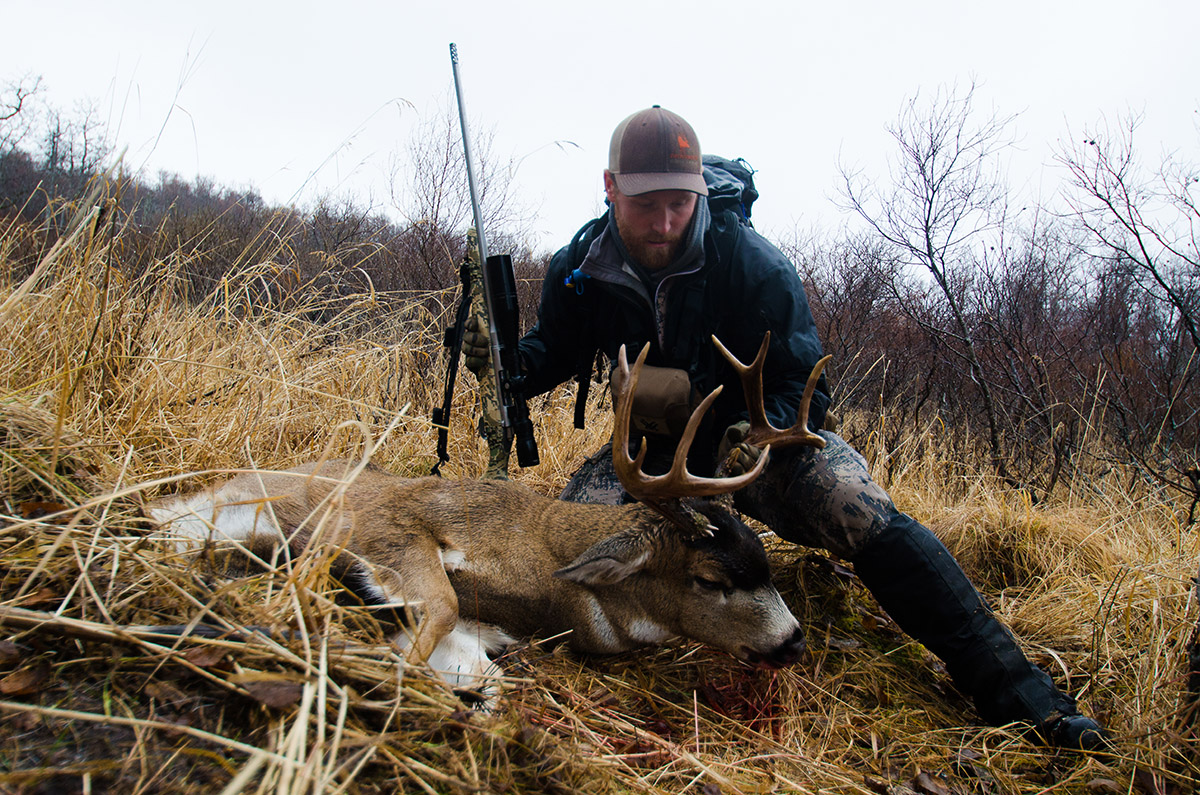 I fished out the radio to hail Paul. Nothing. Minutes later as I fiddled with the camera timer a shot rang out nearby. Soon after, Paul crackled through the handheld: “Deer down, buddy! You get yours?”

“Sure did,” I replied, trying to contain myself. “Really big five-point.”

There was a long pause. “Well, see you at the boat! Have fun with that.”

I dug out knives and set to work, but kept thumbing the .44 on my hip and standing up every few minutes. I’d just proven the quality of the stalking conditions but feared they could be turned against me. I wouldn’t see a challenger outside 30 yards and, with some of the world’s largest bears in the neighborhood, I quartered quickly and checked my back often.

As the sub-Arctic winter night fell I loaded meat in my backpack and strapped antlers and cape on top. The seiner lay on anchor not a mile distant but it still took two hours to descend 1,000 feet through a hell of alder saplings and salmonberry thorns.

Backlit in the Kylia’s flood lights and lounging on the Achilles tubes, Kris sat up as I came over the last berm onto the beach.

I slumped my burden in the bow and shoved us off.

“Woah, nice buck. Sounds like you guys really had an adventure,” Kris said. “I wish I could have been there.” 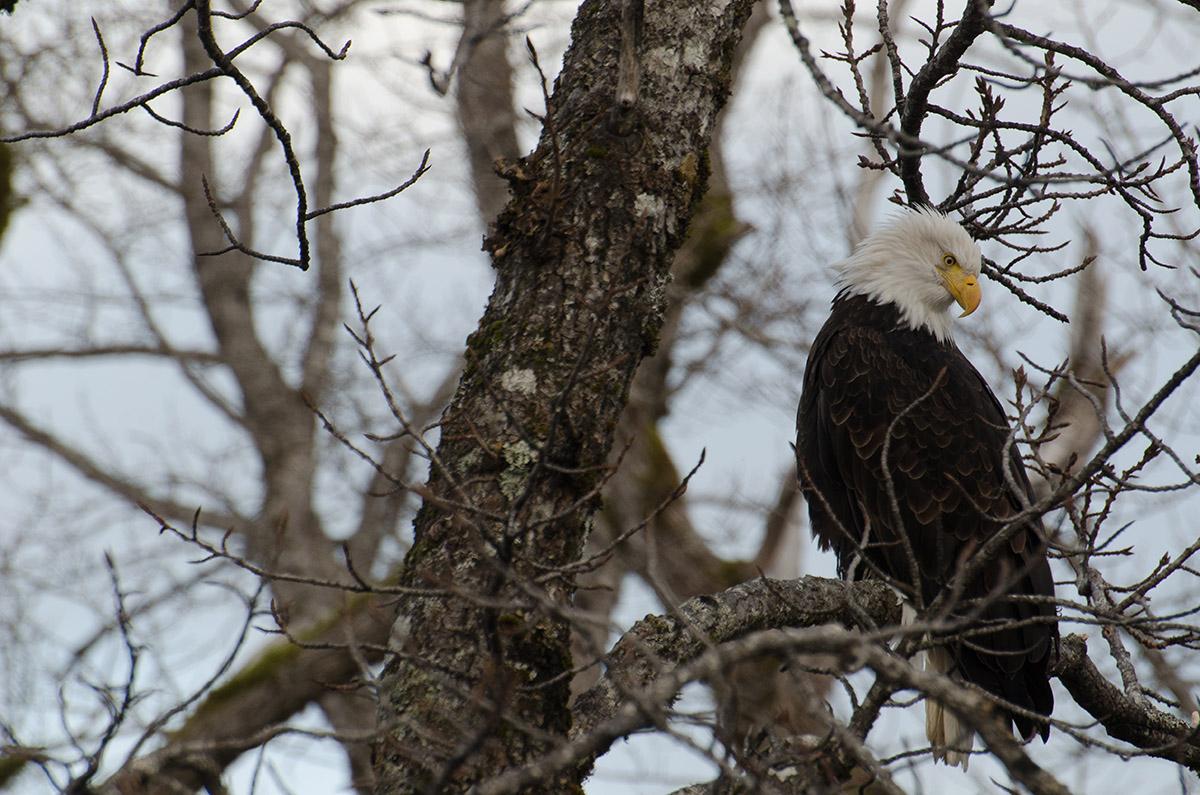 Save this product
First Lite
Corrugate Foundry Pant
$195.00
"These are hands down the best hunting pants I have ever worn. That's the flat truth." - Steven Rinella
Save this product
Benchmade
Steep Country Knife
$162.00
A versatile fixed-blade capable of performing throughout any season, on any species.
Save this product
First Lite
Origin Hoody
$160.00
A lightweight, quiet mid-layer designed to be utilized as both an outerwear piece as well as a layering option as temperatures drop.
Save this product
FHF Gear
Bino Harness PRO-M
$125.00
Made with high-quality, durable Cordura, the FHF Gear Bino Harness is designed to be quiet, lightweight, low profile, modular, and easily operated with one hand.
Get the latest in your inbox
Subscribe to our newsletters to receive regular emails with hand-picked content, gear recommendations, and special deals.
Our picks for the week's best content and gear
For the whitetail obsessed, with Mark Kenyon
Redefining our connection to food, with Danielle Prewett
Your one-stop for everything waterfowl, with Sean Weaver
Get out on the water with the MeatEater Fishing crew
Technical hunting apparel
Purpose-built accessories for hunting and fishing
Quality elk, turkey, waterfowl, and deer calls
Privacy Policy

MeatEater Season 7: Steve Returns to Prince of Wales Island with Cal and Mark for Sitka Blacktails

On this hunt, Steve returns to his fish shack on Prince Of Wales Island for another shot at Sitka blacktail deer. He’s joined by hunting buddies Ryan Callaghan from First Lite and Mark Boardman from Vortex Optics. Unlike an earlier hunt that took place during late summer, this time the guys will be faced with cold, wet weather and deer that have dropped out of the open alpine country and into the thick confines of the lower elevation rainforest...

Ask MeatEater: Where Should I Go on My First Blacktail Hunt?

My first exposure to blacktail deer came during late summer, high above treeline on an unnamed mountain on Alaska’s Prince of Wales Island. Upon seeing that first buck, I was immediately struck by just how different Sitka blacktails are from the whitetails and muleys I’d hunted all my life. Physically, they were much smaller, with short, stubby legs and a compact body. Their antlers weren’t very big, either. Still, the coastal rainforests and...

A Guide to Hunting Blacktail Deer

Blacktail deer have a presence of that only rivaled by a ghost.  They are there, within the blink of an eye they have vanished, never to show their whereabouts again. A blacktail deer’s greatest defense strategy is its own home. When faced with even the slightest hunting pressure, blacktail deer simply vanish into the thick coniferous rainforests of their coastal habitats. There, these small deer are protected by seemingly impenetrable vegetation...