It’s that time of year when hunters throughout the country are applying for big game tags for fall. Many of us are focused on drawing licenses that offer a shot at giant bucks and bulls, but there’s another option big game hunters of all experience levels should be considering: antlerless tags.

Hunters often refer to antlerless tags as doe or cow tags. But these tags often allow the legal harvest of any female deer, elk or moose, as well as fawns and calves that haven’t yet developed antlers. In some states, you can even harvest young male deer and elk with small spike antlers not exceeding a maximum length with an antlerless license. A limited number of female-only tags are issued for horned big game animals such as bison, bighorn sheep and mountain goats.

These antlerless and female-only tags are an important and necessary tool that state agencies use to manage herd numbers. In parts of the country, especially east of the Mississippi, some hunters historically resisted harvesting whitetail does. This led to too many deer, skewed buck-to-doe ratios, unhealthy herds and degraded habitat. We now know that the most effective method for managing herd numbers is the harvest of female big game animals.

In 2017, two out of the three big game tags I filled were antlerless tags. I killed my first moose on a crisp, early September morning in a remote alpine basin covered in mountain willow. Three months later, in sub-zero temperatures, I killed a young cow elk that I tracked through a beautiful, snow-covered aspen grove. Both were extremely satisfying hunts and memorable adventures.

First, you’re going to have a lot more opportunities for a successful hunt. That’s because, generally speaking, there are a lot more females than males in most big game herds. For a new hunter who will be happy with any big game animal or someone who is strictly interested in securing a winter meat supply, this is an important consideration.

It’s also true for a hunter who is dedicated to killing mature males, but also wants a freezer full of venison. It’s a lot easier to remain focused on killing a big, mature buck if you’ve already got a fat doe in the freezer. Think of antlerless tags as meat crisis insurance policies. A couple years ago, I passed up an easy shot on a raghorn elk. I was hoping to kill a bigger bull, but the general rifle season ended before I found one. I would never have passed up that young bull (and all that high-quality meat) if I didn’t also have a late-season cow tag.

That late-season cow tag illustrates another advantage of antlerless tags. The seasons for does and cows are often run longer and later than buck and bull seasons. This gives a hunter more time to fill a tag. Finding animals during late season hunts is often easier, and licenses often allow a hunter multiple chances to fill a tag during archery, rifle and muzzleloader seasons. 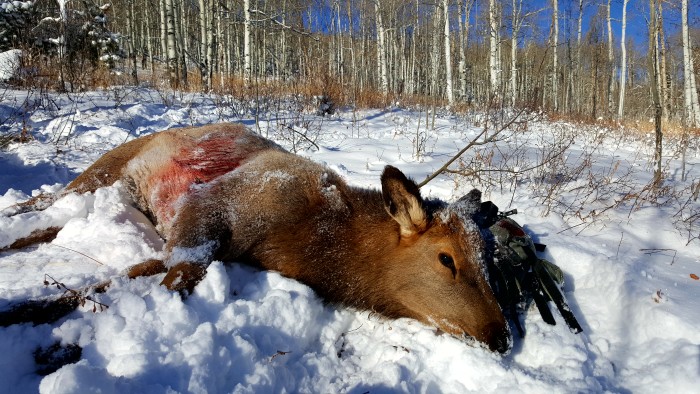 Also, antlerless big game tags are usually much cheaper than male tags. This is an especially important factor to consider when planning out-of-state hunts. In Wyoming, non-resident antlerless pronghorn and deer tags can be had for one-tenth the cost of a buck tag. In Wisconsin, non-resident antlerless whitetails tags cost just $20. In many states, such as Nebraska, antlerless youth tags have the steepest discount and can cost as little as $8.

At these prices, it’s possible to take an affordable out-of-state trip to hunt new country, bring home meat and gain valuable experience. For hunters who have drawn a non-resident buck or bull tag, it’s worth spending a few extra dollars for an antlerless tag to increase the odds of filling a freezer.

If meat is a priority, antlerless tags are the best way to go on more hunts and have more fun stacking up meat. Antlerless tags are fairly easy to come by because the demand is generally lower while the supply is usually high. In some states, it’s possible to purchase multiple antlerless tags over the counter, especially where whitetail deer numbers are above the population objectives set by wildlife managers. Hunters can often easily draw or buy leftover female tags for high-demand, hard-to-draw trophy buck or bull units. This allows them to hunt for a doe or cow while they’re scouting an area for a future bucket list hunt.

Speaking of bucket list hunts, tags for bull moose, bighorn sheep rams, billy mountain goats and bull bison are notoriously hard to draw in the Lower 48. They’re called once-in-a-lifetime tags for a reason. The annual odds of drawing one average well below one percent. Many hunters apply for these species for 20 years or more without ever drawing a license. Some hunters simply give up on the possibility of ever hunting these species while others choose to invest a lot of money on a guided hunt in Alaska where tags are readily available. But when it comes to hunting these bucket list big game animals in the Lower 48, many hunters never consider applying for antlerless or female-only hunts.

A quick study of draw odds on agency websites for the states where these species are available will reveal some largely overlooked opportunities. The waiting period to pull a female tag is a fraction of the time it would be for males of the same bucket list species.

This was definitely the case when I drew a resident cow moose tag in Colorado. Now that I’ve had the opportunity to take a cow moose, I’ll happily apply for a bull moose tag knowing it’s probably going to be a long time before I draw.

Interestingly, non-resident hunters sometimes have better odds of drawing a female tag for these species than residents do. Non-residents usually have a separate, much smaller pool of tags to draw from, but the percentage of non-residents applying for bull, ram or billy tags is often orders of magnitude higher than the number applying for antlerless or female-only tags. If you really want to hunt one of these species, this is the fastest way to make it happen.

Yes, these tags are expensive, which is why many hunters who want big antlers or horns choose not to apply for the antlerless or female-only hunts. But if you kill a buffalo cow, bighorn ewe or mountain goat nanny, you’ll have some fine-tasting meat and a nice set of horns for a trophy. I even kept the skull from my cow moose as a memento of my first bucket-list species.

No matter the species of big game, hunters who refer to hunting female animals simply as “grocery getting” need to remember, for most hunters, filling any tag is a worthy accomplishment. It wasn’t until I’d notched several cow elk tags that I managed to kill my first bull. There’s something to be said for the knowledge and skills a new hunter builds up hunting antlerless big game animals while working towards the goal of getting “the big one.”

There’s also something to be said for an experienced hunter whose only goal is to enjoy all aspects of the hunt, from start to finish, without getting hung up on big antlers. In fact, one of my favorite hunts is a late-season, public land muzzleloader hunt for whitetail does in Nebraska. It’s a challenging hunt for wary animals and my heart still races whenever I’m sneaking into range of a doe.

Now, when I walk up to a doe or cow I’ve killed, I like to think back to the whitetail doe I shot while sitting next to my father in an old apple orchard behind a ramshackle hunting camp in western Pennsylvania. It was my first deer, and my dad and his buddies who hunted at the camp were just as excited about that doe as I was. As far those guys were concerned, any deer was a good deer. That still holds true today.

Save this product
Phelps
"UNLEASHED" Elk Bugle Tube
$41.99
The wait is over!!! The unleashed bugle tube is here and ready to rip.
Save this product
Phelps
METAL Bugle Tube
$62.99
Want to be the loudest elk in the woods? Check out Phelps METAL bugle tube and locate a bull anywhere.
Save this product
Phelps
AMP Elk Diaphram Calls
When we need to cow talk as well as mimic intruding satellite bulls, you’ll find us using these calls.
Get the latest in your inbox
Subscribe to our newsletters to receive regular emails with hand-picked content, gear recommendations, and special deals.
Our picks for the week's best content and gear
For the whitetail obsessed, with Mark Kenyon
Redefining our connection to food, with Danielle Prewett
Your one-stop for everything waterfowl, with Sean Weaver
Get out on the water with the MeatEater Fishing crew
Technical hunting apparel
Purpose-built accessories for hunting and fishing
Quality elk, turkey, waterfowl, and deer calls
Privacy Policy

Across the West, rifle seasons for elk will be opening soon. For me, that means it is time for some timber sneaking. Timber sneaking, or slowly still hunting through stands of lodgepole pines, is my favorite way to hunt pressured elk during rifle season. In the last dozen years, I’ve killed ten elk in dense stands of dark timber. Every one of them was shot with a rifle at ranges under one hundred yards. I shot one bull at less than twenty yards...

Video of the Day: The Linguists (Elk Hunting)

By Mark Kenyon A few weeks back while in Bozeman, Montana for the Sitka Gear Converge event, I got a sneak peak at a new film the guys at Sitka were really excited about – The Linguists. And I was blown away. The Linguists is one part elk hunting adventure, one part documentary of the history of elk calling, and two parts stunning. It’s one of the best hunting related films I’ve seen yet – beautiful imagery, a captivating story, powerful moments...