There is nothing quite like seeing a big mule deer buck skylined on a distant ridge. Naturally, many whitetail deer hunters choose this iconic Western big game animal for an out-of-state hunt. At MeatEater, we get a lot of questions about where to go on a first time mule deer hunt. Fortunately, there are plenty of options.

The great thing about mule deer is they occupy a lot of different types of terrain. With a little research, most hunters can find a place that matches the experience they’re looking for, whether it’s a solo adventure deep in the backcountry or a hunt in mild, open country where they can glass bucks from a vehicle.

Every fall, there is nothing I look forward to more than hunting for a big mule deer buck. Unlike a lot of our eastern whitetail populations, mule deer prefer truly wild country. Bucks that manage to get big and old in these places are extremely special animals. So, I’m always searching for the best places to go on my next mule deer hunt.

Although mule deer are widely distributed in many different environments from the Great Plains to the Western coastal ranges and from the Yukon Territory to Sonora and Baja Mexico, they can only be hunted in 15 states. For hunters interested in planning an out-of-state hunting trip for mule deer, some of those states offer outstanding public land hunting opportunities and easily obtained tags, while others aren’t as accommodating for non-residents.

You’ll notice some states that are known to produce big bucks year after year, like Arizona and Utah, aren’t listed below as good choices for an initial out-of-state mule deer hunt. That’s because tag distribution is extremely limited. In many cases, hunters apply in these states for many years without ever drawing a tag. Here are the best states for readily-available tags, good deer numbers, plenty of public access, do-it-yourself opportunity and a chance at a mature buck on your first trip. 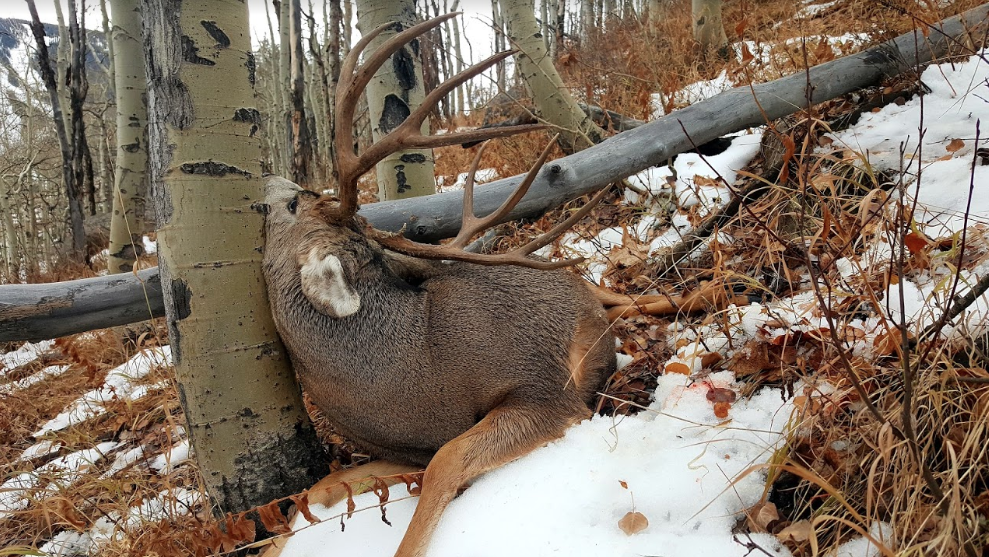 Colorado
Colorado is widely regarded as the nation’s top mule deer destination. Due to extremely good mule deer habitat with plenty of food and sound management practices by Colorado Parks and Wildlife, the state has the largest mule deer population in the country. More big bucks are killed here every year than in any other state. Mule deer tags are only available through a limited draw here; you have to apply for a unit-specific tag for either archery or rifle seasons. The good news is there is an abundance of units where tags are easy to draw. There is no need to spend years applying for well known “trophy units” since you can find good bucks just about everywhere in the state. Public lands are abundant in the western half of the state but very limited in eastern Colorado, although some of the biggest bucks are shot out on the eastern plains.

Archery season runs from late August until late September. During this time, mule deer in the Rockies are found at high elevations, often above treeline. Rifle seasons in the mountains take place in late October and the first half of November. Depending on weather and timing, mule deer are widely distributed anywhere from high country summer range down to low elevation wintering grounds. On the eastern plains, some rifle seasons run into December. I may be biased, but if I could only hunt one state for the rest of my life for mule deer, it would be Colorado.

Idaho
Idaho runs a close second to Colorado when it comes to mule deer hunting. In recent years, a lot of very big bucks have been taken in Idaho. Generally speaking, herds here are doing well and deer numbers are good. Hunters can buy a mule deer buck tag over the counter in Idaho. In fact, Idaho is one of the few states in the country where this is possible.

Many units can be hunted with a general, over-the-counter tag and hunters can also apply for “controlled hunts” where the number of available tags is limited and hunting pressure reduced. Over two-thirds of Idaho is public land, so finding a place to hunt shouldn’t be a problem for first-timers. The best mule deer numbers are found southeast of the Panhandle region of Idaho. Archery season runs in September and most rifle seasons occur during October, with some exceptions. The terrain where you’ll find mule deer ranges from dry, high-desert foothills to the rugged, mountainous, alpine zone.

Montana
Montana has a lot of country and lot of mule deer. Hunters must apply for a general deer tag or a general deer/elk combo tag, but it is pretty much a guaranteed draw. The general tag allows hunters to chase mule deer in units all over the state. There are some limited draw, unit-specific tags with higher trophy potential than the general tag, but first-time mule deer hunters shouldn’t be concerned about trying to get their hands on one. There’s plenty of good public lands mule deer hunting to be had on the general tag.

The drawback of hunting here is the cost of a non-resident license. Montana’s deer tag runs almost $700, which is much higher than many other Western states. The advantage is that Montana deer seasons run long. With an archery stamp, hunters can pursue mule deer during a six-week archery season that runs until early October and again during a five-week rifle season that ends in late November. Not many other states allow hunters to go after mule deer bucks when they are most vulnerable during the peak of the rut in late November.

Wyoming
Wyoming was once considered the cream of the crop for mule deer hunters. While deer numbers and the quality of bucks have declined recently due to drought and tough winters, Wyoming is still a very good destination with ample opportunities for good hunting.

General region-wide deer tags that are good for multiple units are easy to draw as a first choice, with the exception of the famous Region G. There are also unit-specific tags that have different season dates from the general region tags. Some of these are much harder to draw due to increased demand. Non-residents without a stack of preference points shouldn’t expect to draw one of the trophy units, although Wyoming’s application system gives every applicant a small chance of drawing.

Like Colorado, public land is very limited in the east and abundant out west, but there’s a catch. In Wyoming, federally designated wilderness areas are off-limits to non-resident big game hunters unless they have hired a licensed outfitter. So, research which tag you apply for carefully or you may find yourself surrounded by public lands you are unable to legally hunt. Some deer units in Wyoming are comprised almost entirely of designated wilderness. However, even with these limitations, Wyoming is a great place to go on your first public lands mule deer hunt.

Nebraska
With an abundance of flat terrain, agriculture and private land along river corridors, Nebraska is known to most hunters as a state with great whitetail hunting. That is true, but for hunting mule deer on the eastern edge of their range, Nebraska has a lot to offer hunters. Mule deer are common in the western half of Nebraska, and the terrain there is far from flat. From ponderosa pine covered ridges to the broken Sandhills country, mule deer have a lot of places to hide.

It is true that hunters might not find as much public access in western Nebraska as states in the Rockies, but there are plenty of places to explore. Mule deer can be hunted on large tracts of national forest and national refuge lands as well as state wildlife management areas. There is also the Open Fields and Waters Program that provides hunters access to private lands.

Deer tags are available over the counter in Nebraska. Archery and rifle tags are purchased for specific regions that encompass large areas. The December muzzleloader season is open statewide. Keep in mind, some portions of the state are closed to any mule deer hunting and in others killing mule deer does is prohibited. Usually when I head to Nebraska I’m after whitetails, but on one occasion, after an EHD outbreak decimated the whitetails in the area I was hunting, I couldn’t pass up a decent mule deer buck.

You may have heard that mule deer populations are struggling these days and the “heyday of mule deer hunting” has long since passed. It is true that mule deer numbers are generally down from their historic peak, particularly due to habitat loss on winter range in some parts of the West. Despite this, there are plenty of places where they are doing just fine and where there is still good hunting available.

Hunters have been watching or reading about the mule deer’s decline for so long that some worry they’ll witness its end. Writers and speakers often quote Professor Valerius Geist’s opening lines of Chapter 8 in his 1990 book “Mule Deer Country,” where he warned: “For all its current abundance, the mule deer, so different, so uniquely American, so young and promising, is nevertheless a species marked for extinction.” Geist’s next two sentences...

Ask MeatEater: What Are Your Favorite States to Hunt?

Every day, our fellow meateaters send us more than 100 emails regarding hunting, fishing, cooking, conservation, and more. So, we decided to publish a series dedicated to our favorite FAQs. Ask MeatEater is powered by onX, creators of the best digital mapping tool for hunters and anglers. My favorite states to hunt, in no particular order, are Montana, Alaska, Wisconsin, Idaho, and Colorado. They all have a special place in my heart for one...