A collection of bullets I’ve recovered from big game animals rests on a bookshelf in my house. They bring back memories of hunts past, but each one also tells a story of bullet performance. Missing from the collection are the bullets that fragmented into tiny pieces or passed clean through. I can’t say for sure that I’ve ever lost an animal because of poor bullet performance, but I do believe choosing the right big game bullet may be more important than your choice of caliber.

Over the past 15 years, I’ve killed more than 40 big game animals with various bullets. Sure, accuracy is paramount no matter what bullet you’re using, but I’ve learned that some bullets are consistently more lethal than others.

When I was a kid, most hunters didn’t put much thought into bullet selection. It was rare to see anything but the classic green and yellow box of cartridges in anyone’s gun cabinet. I remember paying $15 for my first box of .30-06 Core-Lokts, and that price hasn’t changed much. Every major ammunition manufacturer still makes their own affordable version of the same bullet, and hunters still use them to kill everything from antelope to moose.

So why shoot anything else? The answer lies in how bullets are constructed. 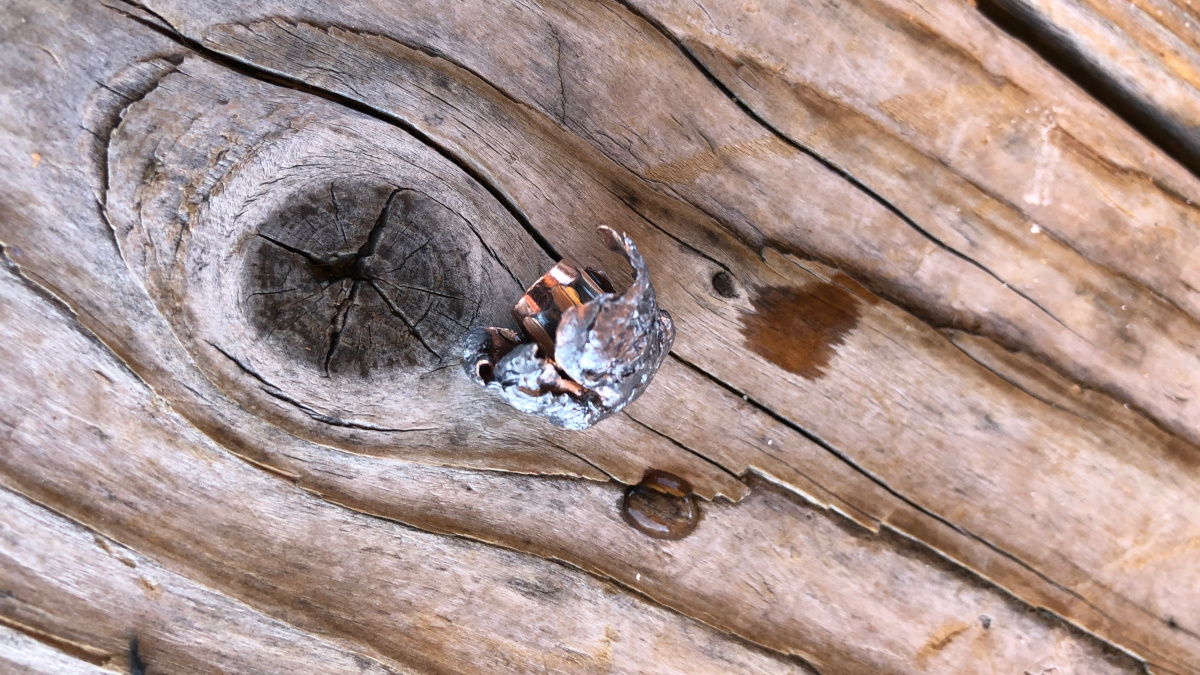 Cup-and-Core Bullets
“Cup-and-core” bullets have been around a long time. They all share the same basic construction as the old Remington Core-Lokt. Cup-and-core hunting bullets consist of a soft lead bullet encased in a thin copper jacket. Usually, the soft lead tip of the bullet is exposed to initiate mushrooming and violent fragmentation upon impact. This causes wide wound channels and massive trauma. Big game animals shot through the ribs usually bleed out very quickly.

However, there are inherent problems with this type of weak bullet construction. Because the copper jacket is thin and lead is naturally soft, cup-and-core bullets tend break apart easily. When the bullet hits bone, such as a sturdy shoulder blade, it may explode. Without weight retention, the bullet may also lack the necessary penetration to reach the vitals. An accurate shot might only wound a big game animal.

Even with lethal heart and lung shots, cup-and-core bullets can still cause problems for hunters whose main concern is filling the freezer. If the bullet hits a rib and breaks apart, lead fragments will veer off into surrounding muscles, making it necessary to trim a significant amount of bruised, bloody meat away from wound channels.

Sometimes, meat loss can be even more substantial. A few years ago, a buddy of mine shot a cow elk in the shoulder blade and was forced to leave nearly the entire front quarter behind. Everything but the shank resembled strawberry Jello riddled with tiny bone fragments.

Early Premium Bullets
Decades ago, premium bullets were developed to address shortcomings of the cup-and-core bullets. They were designed for hunters who needed heavy-duty bullets that would hold together while penetrating through bone in dangerous game animals.

Two of the best are the Nosler Partition and the Swift A-Frame. Both have a thick, sturdy copper jacket surrounding a lead core. Additionally, both bullets have an internal, horizontal copper “partition” that prevents the lower half of the bullet from breaking apart, while still allowing for some mushrooming and fragmentation. To visualize a cross-section of each bullet, picture an “A” that doesn’t quite close at the point, and then fill in the gaps with lead.

Although their design is old, both bullets are proven in the field and they’re still popular today. I’ve killed elk and mule deer with the Nosler Partition and a very large black bear with the Swift A-Frame. These bullets may have originally been designed for dangerous game, but they’re excellent choices for any big game.

Ballistic Tips and VLD Bullets
Ballistic tips are more aerodynamic, and therefore more accurate than traditional cup-and-core bullets. These modern bullets have a plastic point instead of a rounded, exposed lead tip, but they share the same thin copper jacket and soft lead body as cup-and-core bullets. Accordingly, they’re also prone to excessive fragmentation. Lacking deep penetration, ballistic tips are designed for smaller animals like pronghorn and whitetails. There’s much better choices for bigger game, like bear or moose.

VLD, or “very low drag” bullets typically feature a hollow-point tip and a thin, lightweight copper jacket. They are even more aerodynamic than ballistic tips. VLDs have become popular with some hunters because of their proven accuracy in long range shooting competitions. Their lightweight construction works fine for punching paper targets and ringing metal gongs, but even for hunters who put a premium on accuracy, VLDs aren’t the best choice.

Both ballistic tips and VLD bullets are ideal for hunting thin-skinned furbearers, though. Because they tend to disintegrate inside animals rather than blowing all the way through, valuable hides are often spared a lot of exit wound damage.

Bonded Bullets
Bonded bullets are one of the best choices available to big game hunters. They have an aerodynamic profile that lends itself to accuracy and sturdy construction for punching through thick hide and tough bone. Bonded bullets tend to hold together well, meaning pass through shots are common. A thick, heavy copper jacket is chemically bonded to a lead core, which promotes weight retention and prevents excessive fragmentation. A pointed plastic tip initiates mushrooming for lethal wound channels.

I’ve used the Nosler Accubond and Edge TLR from Federal Premium with great success. At the shooting range, their accuracy has always been impressive. In the field, the results have been equally good. Elk are well known to be one of the toughest critters on the planet, so they’re an ideal yardstick for measuring bullet performance. From under 50 yards to out past 300, I’ve laid down a pile of elk with one-shot kills using bonded bullets. If they’re ideal for elk, they’re good enough for just about every big game animal in North America. 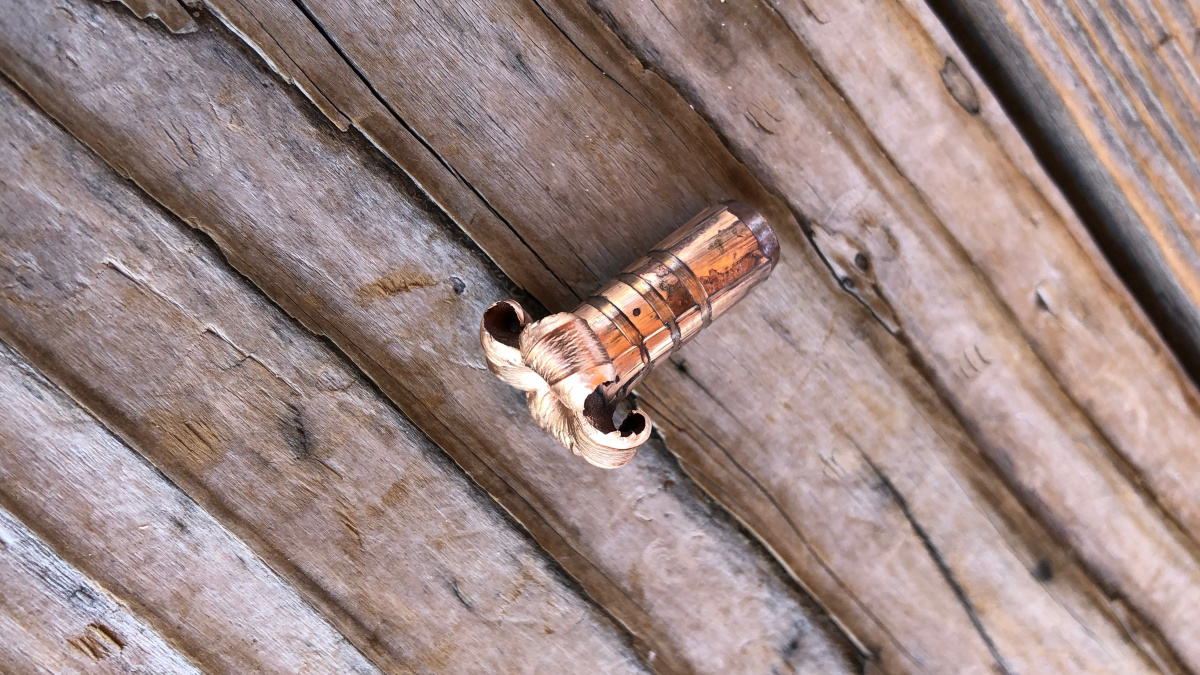 Monolithic Bullets
Monolithic bullets are also known as copper bullets, or non-toxic bullets. The term monolithic describes a bullet that’s constructed from a single piece of hard metal (usually copper) rather than one that’s made out of lead surrounded by a copper jacket. Monolithic bullets were designed to meet bans on lead ammunition.

Monolithic bullets have a couple advantages over other styles of hunting bullets. A plastic tip causes the front of monolithic bullets to mushroom effectively, but they don’t fragment like lead bullets. Deep penetration and pass-through shots are the norm; Even when they come up against tough bone, meat loss is minimal. I’ve shot several big game animals through the shoulder blade with copper bullets, like Federal’s Trophy Copper. I’ve only recovered a single bullet, and I’ve never had to trim away a bunch of blood-shot meat.

Finally, the non-toxic nature of monolithic bullets has become increasingly important for many hunters. Even if you’re not legally required to use copper bullets, why ingest tiny particles of lead if not necessary?

A Note on Accuracy
Statistics like bullet weights, ballistic coefficients, sectional densities, levels of powder charges, and velocities all affect accuracy. These details are of paramount importance in long-range bench rest competitions where the distance between winning and losing might be only a few hundredths of an inch. Accuracy is also very important for hunters, but we simply don’t need to achieve the level of precision that competition shooters demand.

No matter the species of big game you’ll be hunting, avoid bullets that lack construction for weight retention and penetration. Try out a few different sturdy bullets that are designed for both accuracy and terminal performance at the range until you find one that consistently shoots groups under 2 inches at a hundred yards. With practice at longer ranges, that’s more than enough accuracy to kill a big game animal from a quarter-mile away.

Many hunters who live east of the Mississippi River dream of their first western big game hunt, be it calling to bugling elk in the dark timber, stalking pronghorn antelope across the high plains, or glassing rugged desert canyons for mule deer.  But planning such a hunt can be intimidating. At MeatEater, we get tons of questions from hunters looking for information about first-time, do-it-yourself western hunts. We are happy to provide some...

How to Make Your Backcountry Packout Easier

My aggressive calling had enticed the herd into viewing distance, and now they were closing in to archery range. We were pinned. I found myself lying uncomfortably on my back, staring up at the quaky treetops, and my client was on one stable knee. I noticed his nocked arrow shaking like the trembling aspen leaves above. As the herd crossed a small stream and passed in front of us, one of the larger, trailing satellite bulls came to a broadside...