Muzzleloaders appeal to gun hunters the same way recurve bows appeal to archers. There’s something rewarding about passing up modern technology to pursue game the way our ancestors did. Recurve bows have existed several thousand years longer than muzzleloaders, but you get the idea.

If you’re looking to step back to a time before self-contained cartridges revolutionized the hunting landscape, you’ve come to the right place. Several members of the MeatEater crew have filled tags during muzzleloading seasons, and we caught up with a few of them to get their pick for the best “smoke poles” in the business.

Jump to: Muzzleloaders We Use

What We Look for in a Muzzleloader

The criteria for selecting a good muzzleloader are similar to those you’d use to pick a good hunting rifle. At the end of the day, you need a weapon that will reliably dispatch an animal at the distance you plan to hunt. Ideally, it also shouldn’t require taking out a second mortgage. Here’s what you’re looking for:

Jump to: What Makes a Good Muzzleloader

The Muzzleloaders We Use

What Makes a Good Muzzleloader

For those unfamiliar with these designs, flintlock and percussion cap muzzleloaders feature a "lock" affixed to the side of the firearm. Powder is ignited on the outside of the gun, whether by flint or by cap, which travels through the touch hole and ignites the main charge of powder in barrel.

Inline muzzleloaders feature a hammer on the rear of the firearm that ignites the primer, which lights the powder charge in the barrel. These muzzleloaders are easier to use for a variety of reasons. First, they’re less susceptible to moisture because the sealed breach keeps out water and the lack of priming powder means that hunters don’t have to worry about "keeping their powder dry."

Instead of loose powder for the main charge, hunters can also use pre-formed black powder substitute charges. These charges are pre-measured (usually in 50-grain increments) and can be inserted directly down the muzzle.

Finally, instead of using a patch, inline muzzleloaders are designed to shoot sabot and “PowerBelt” bullets. These bullets eliminate the need for a patch by using a plastic cup behind the bullet not unlike a shotshell wad. While flintlock rifles can use these bullets as well, an inline rifle is more likely to shoot them accurately.

For ease of use, inline muzzleloaders are definitely the way to go. But if you want to hunt a traditional muzzleloader season—or you just want an even greater challenge—flintlocks and percussion cap guns have taken their fair share of game, too.

Just like cartridge guns, muzzleloaders come in a variety of calibers designed to target specific classes of game animals. Fifty-caliber guns are by far the most common. These are jack-of-all-trades rifles that can be used on anything from whitetail to elk to bears to moose. If you’re hoping to take advantage of your state’s early or late muzzleloader whitetail season, you’ll want to look for a .50-caliber gun. These are loaded with bullets usually in the 250-grain range that can be fired around 2,200 feet-per-second. Delivering over 2,600 foot-pounds of energy at the muzzle, they have enough juice to take down some of America’s largest big game animals.

Muzzleloaders can also be found in .45- and .54-caliber varieties. Forty-five caliber rifles can shoot flatter while .54-calibers can theoretically target larger game. But both cover similar ground as the .50, and there are fewer bullet options available. Thirty-two and .36-caliber guns can be used on smaller game, though these are often replica side-lock American long rifles.

Virtually all modern inline muzzleloaders come with receivers drilled and tapped for scope mounts. Many even come with a scope already in the box. Two hundred yards is the maximum range for most muzzleloader hunters, so you don’t need anything more powerful than the standard 3-9x scope common on many deer rifles. In all honesty, a 1-6x or 3x scope would be more than enough to get the job done.

If you’d rather forgo that modern convenience, you can also find many muzzleloaders with iron sights. Check out Brody Henderson’s “Field Notes” for a hot tip related to iron sights.

As with most things gun-related, you can spend as much or as little as you want on a muzzleloader. Traditions and CVA are the most common brands. They make a variety of inexpensive muzzleloading rifles in the $200 to $300 range as well as higher-end options in the $500 to $800 category. If you want to step up a notch, Knight is one of the most well-respected muzzleloader manufacturers, and they offer rifles in the $900 to $1,100 range. Pedersoli guns can be purchased for twice that figure, and custom guns can hit five digits.

Your choice depends on your budget, but most muzzleloader hunters in the deer woods are carting around rifles that cost them about $500 all-in.

What’s the Maximum Range for a Muzzleloader?

You don’t have to spend much time on the Google Machine to find videos of 500, 600, and 700-yard shots with a muzzleloader (for whatever reason, these videos are usually set to electric guitars). While it’s possible to make hits at extreme distances with a muzzleloader, ethical hunters should be pursuing better odds.

A good quality inline muzzleloader should be able to post groups under three inches at 100 yards. Some shoot better; others, worse. But given that a deer’s kill zone is about 10 inches wide, even a two or one-and-a-half-inch group at that distance will limit your rifle’s technical maximum range to something around 400 yards.

However, that doesn’t mean you should be taking 400-yard shots with a muzzleloader. As the bullet slows down, it will be more impacted by both gravity and wind. It’s difficult enough to compensate for these variables, but you must add to that uncertainty the inherent unpredictability of the muzzleloader system. Modern rifle cartridges are constructed with machines and computers; you’re stuffing powder and a bullet down a barrel by hand. Practiced muzzleloader hunters can achieve amazing consistency, but unless you’ve developed those skills, it’s best to keep scoped shots in the 150-yard-range. With iron sights, even closer.

As always, practice is key. Don’t take a shot at 300 yards based on your ballistics calculator app. If you’ve practiced a 300-yard shot and know you can make it every time, go for it. If not, work on getting closer. 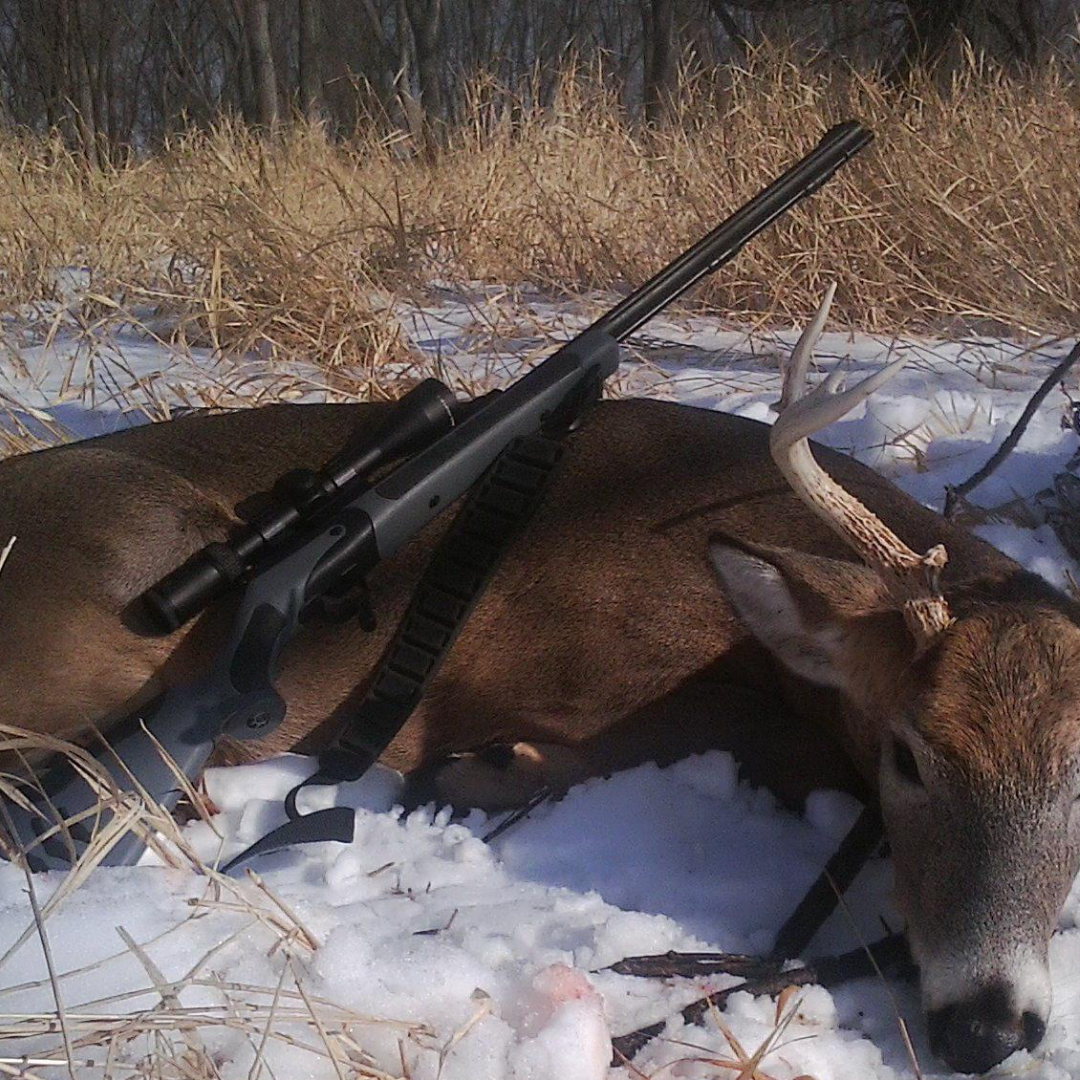 Price: $600
"I’ve been shooting the same .50 caliber TC Triumph for over a decade, and it’s never let me down."
Brody Henderson

When MeatEater’s Brody Henderson finds something that works, he sticks with it. That’s why he’s been shooting the same Thompson/Center (T/C) Triumph .50-caliber inline muzzleloader for over a decade.

"It’s never let me down," he said. "I’ve killed elk, moose, and antelope with it during Colorado’s September muzzleloader-only season as well as Nebraska whitetails during their December season. It’s a dependable accurate, affordable inline muzzleloader that carries like a lightweight mountain rifle."

"Switching to a peep sight was a game changer for me and gave me the confidence to make quick, clean, long one-shot kills on a big Shiras cow moose and a nice bull elk," Henderson said.

You might come across a Triumph on the used gun rack, but if you want a new gun with a similar look, feel, and performance, check out the T/C Pro Hunter FX. 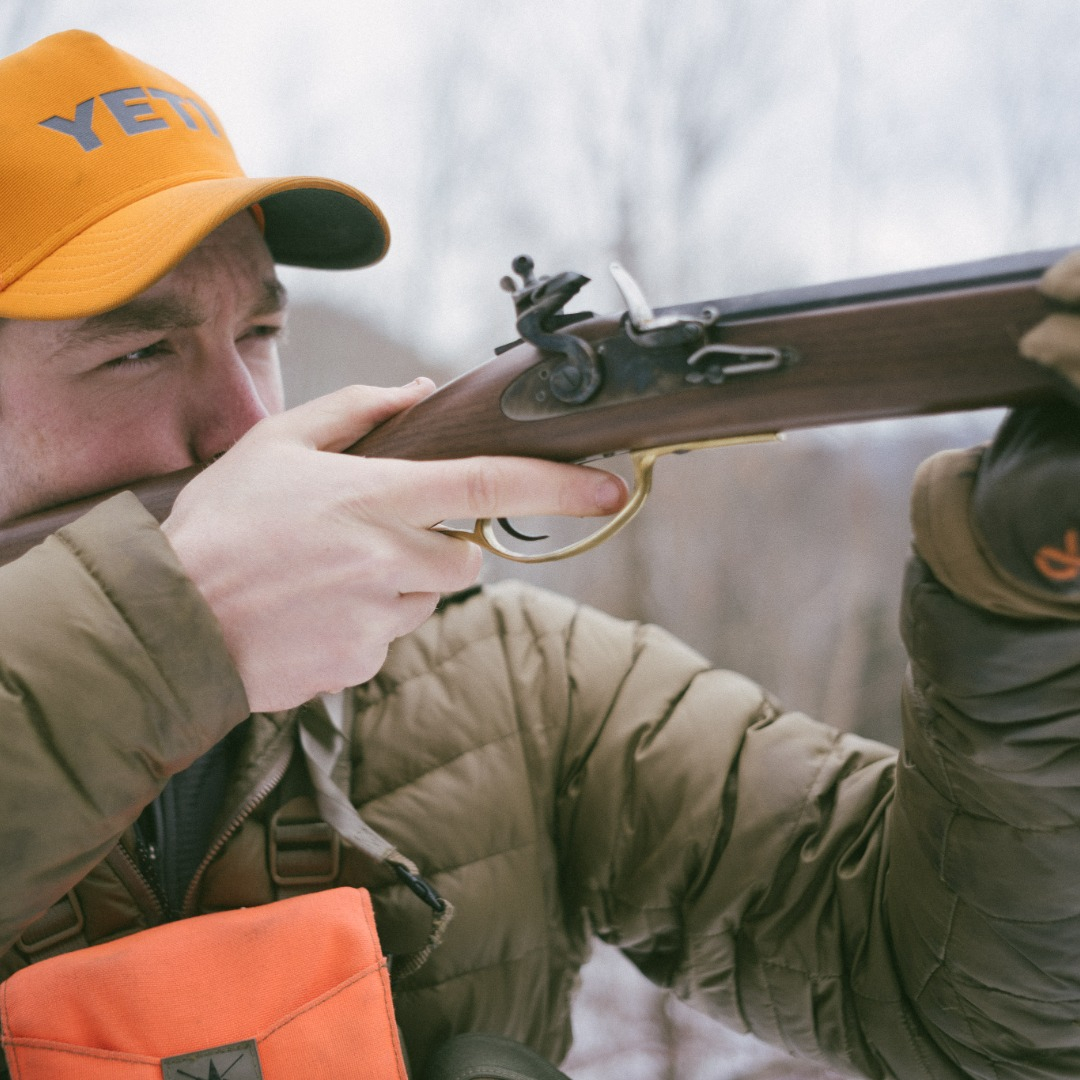 Seth Morris grew up taking full advantage of Pennsylvania’s flintlock deer season. Every year, the state offers about a week after Christmas for hunters to target whitetail bucks and does using only flintlock firearms. If you’d like to participate, or you just want to fire the gun that helped settle the West, Morris recommends the Pedersoli Traditional Hawken Hunter.

"This rifle is just flat out fun to shoot. It’s accurate, too," he said.

Morris said he expects a three-inch group at 50 yards using iron sights, which is more than accurate enough to make good hits at that distance. If a deer is standing still and he has a good rest, he sometimes stretches a shot to 70 or 80 yards. You can watch Morris use this rifle in the field in the Season 10 episode of MeatEater called “A Flash in the Pan” (available on Netflix). 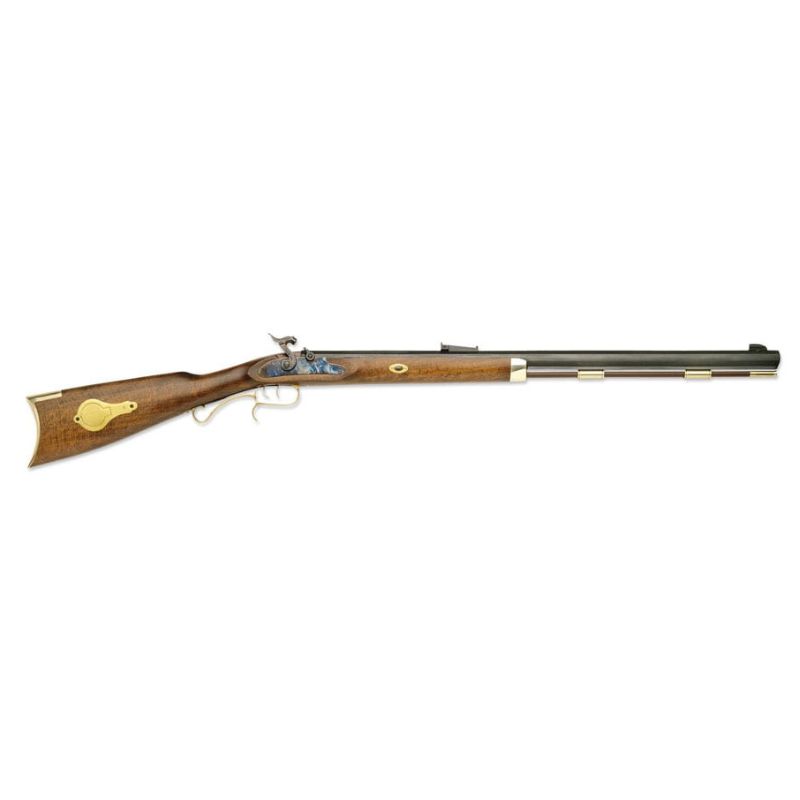 Price: $500
"If I’m recommending a traditional muzzleloader, I have to go with the T/C Hawken."
Rick Hutton

Percussion cap muzzleloaders offer a similar experience to flintlocks but with increased reliability. There’s a reason American mountain men left their flintlocks behind as soon as percussion caps became available. If you’d like to follow in their footsteps, FHF Gear’s Rick Hutton has had great success with the Thompson/Center Hawken.

"If I’m recommending a traditional muzzleloader, I have to go with the T/C Hawken,” he said. “These rifles feature quality barrels and craftsmanship at an affordable price. Mine is a year-one production rifle from 1970, and I've found the percussion system to be incredibly reliable. It also has a quality double set trigger setup, which helps improve groups for longer pokes."

If you want to hunt with a Hawken, Hutton recommends a 1:48" or, better yet, a 1:24" twist rate to accommodate heavy, conical bullets.

You can still find T/C Hawken rifles on auction websites like GunBroker and GunsAmerica, but the company discontinued this model in 2015. If you want a new percussion cap rifle and don’t mind spending a little extra cash, Hutton recommends the Lyman Great Plains Rifle. 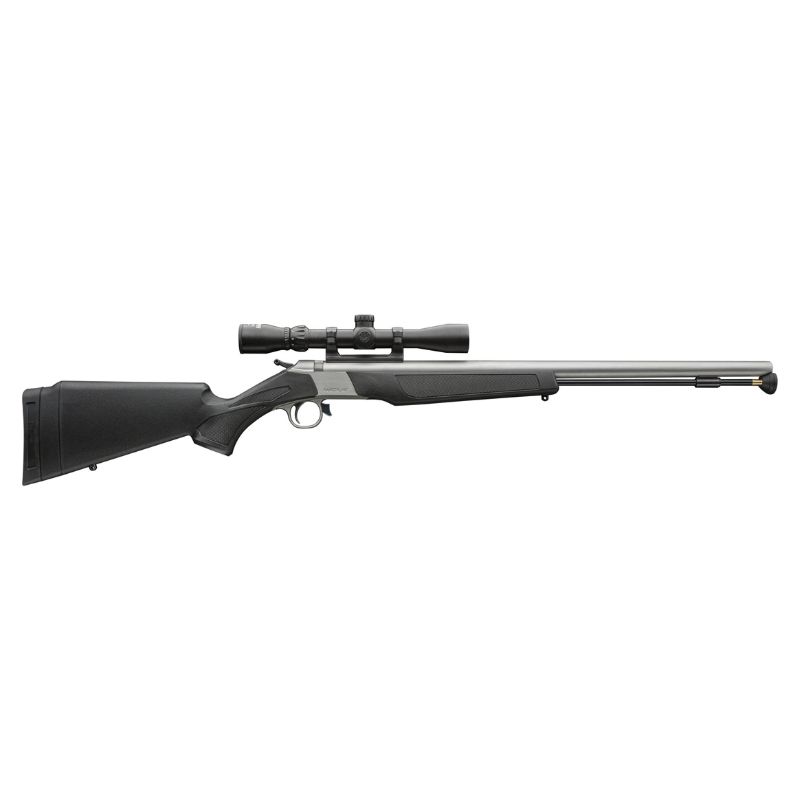 Price: $223
"The Wolf is one of the most popular muzzleloaders ever produced, but it’s still available for less than $250."
Jordan Sillars

If you only want to dip your toe into muzzleloader hunting, an $800 rifle isn’t the way to go. That’s where the CVA Wolf shines. The Wolf is one of the most popular muzzleloaders ever produced, but it’s still available for less than $250. Add a bore-sighted scope and soft-sided case, and you’re only looking at $330.

Plus, the Wolf is also the lightest and shortest rifle on this list, making it maneuverable and easy to carry for new and veteran hunters alike. The no-nonsense stainless-steel barrel will weather wet conditions, and the 1:28” twist rate can accommodate a wide selection of bullet weights.

You don’t have to spend hundreds of dollars to get into muzzleloading. This CVA may not come with all the bells and whistles, but it will still serve you well in the woods—and do it for a fraction of the cost.

Every hunter with much experience under their belt has suffered through painful blisters, numb toes, and aching feet. It’s tough to focus on quarry when your dogs are barking and bloody. That’s why it’s critical to find the best hunting boots for the job, whether that’s all-day rut sits or early-season stalks. After field testing dozens of models, we’ve narrowed it down to a few of our favorites. Jump to: The Hunting Boots We Use What We Look for...

The backpack you choose could make or break your hunt—and back. Much like boots and broadheads, every hunter seems to have their own thoughts on the best hunting backpack, and it’s largely a personal choice based on conditions, country, and quarry. But after carrying gear and game in countless configurations, we’ve crowned these the top picks that’ll have you covered for any big game hunt. Jump to: The Hunting Backpacks We Use What We Look for in...

Responsible gun owners secure their firearms from unauthorized users. There’s really no two ways about it. Between kids and criminals, no household can escape the possibility of a break in, and gun owners owe it to their communities to do what they can to keep their firearms locked up. But the sheer variety of gun safes and cabinets can be overwhelming. Safes feature a range of sizes, materials, and locking mechanisms, and can be had from $50 to...