There are a lot of tools, gadgets, and accessories these days that, while they might increase your comfort or efficiency, aren’t absolutely necessary for a safe, successful trip in the woods.

A good knife is not one of them.

Ask any hunter, backcountry explorer, survivalist, wildlife researcher, anyone who spends extended time in the outdoors: a reliable blade is a necessity. Our earliest ancestors figured that out a long time ago, and it’s held true since then. Of course, wherever demand goes, supply follows, which means today’s market is flooded with oodles of brands, designs, and features.

We’re going to keep it simple. Benchmade is our go-to brand. This California-born, Oregon-based company has been slinging blades since 1980 when it started as a two-man show. Founder Les de Asis specialized in a type of butterfly knife from the Philippines, known as a Balisong. (Before Benchmade was Benchmade, the company was actually called Bali-Song, Inc.)

In 1987, the company rebranded to Benchmade, moved to Clackamas, Oregon, and became the first knife company to work with a high-power laser cutter, which meant they could create knives from stronger steels than anyone ever had before. They moved into their current manufacturing center in Oregon City in 1990 and developed into the company we know them as today.

Jump to: The Hunting Knives We Use

What We Look For in a Hunting Knife

When it comes to hunting knives, you want to reach for something precise enough to make the first incision on a still-warm animal, but also up to varied tasks like quartering, cutting through tough tendons, and even trimming tenderloins or slicing up heart for the skillet back at camp. This one knife has to be the master of all trades, tough as hell, and when it comes to adding weight to your kit, lighter than a breath of air. With that in mind, we look for:

Jump to: What Makes a Good Hunting Knife

The Hunting Knives We Use

What Makes a Good Hunting Knife

Let’s be real…if we could carry around a whole block’s worth of knives with us on a backcountry slog, we probably would. What would a hunter’s knife set look like? Maybe one for small incisions, one for long cuts, one for working around complicated joints, and one for cleaning under our fingernails after the job is done. (If you say you’ve never done that in a rare moment of outdoor boredom, you’re lying.)

But to avoid looking like Atlas carrying the globe over blowdowns and across streams, keep a light pack and stick with one do-it-all blade. The Hidden Canyon and Steep Country both feature a drop-point blade, which is widely considered one of the best shapes for skinning game. Since the point slopes away from the back of the blade, you’re less likely to accidentally slice open organs while making long cuts through the hide.

The Meatcrafter’s trailing point is also great for making super-precise cuts. This is the top-to-bottom narrowest blade of the three, so it navigates nooks and crannies with ease.

We’ll get to steel hardness ratings below, but for now, all you need to know is that the steel Benchmade uses for these three knives is the perfect combination of tough and flexible. They can stand up to any wear and tear we put them through, but they aren’t so hard that brittleness becomes an issue. Sharpening is a breeze, especially with a tool like the Work Sharp Field Sharpener.

Knives can get heavy and in the way quick. These Benchmade knives all feature a sleek, ultralight design that might cause you to forget you have them on you in the first place. Each one adds about 3 ounces to your kit, which means it pulls its weight and then some.

The blaze orange handles and sheaths are meant to stand out in your pack if you choose not to wear your knife on your belt. Even the Hidden Canyon’s wood grain handle features an eye-catching blaze outline. If you’re concerned about sticking your hand in your pack and catching the tip of a blade that’s been exposed by a loose sheath, no need to worry. These sheaths are fitted perfectly to the blade and handle and won’t slide off, no matter how hard you jostle your gear around.

How Hard is This Steel, Anyway?

There are a bunch of different steel hardness rating systems out there, but we’ll stick to the Rockwell scale, which is the most common measurement for cutlery. Steel hardness is measured in HRC, which stands for “Hardness according to Rockwell–cone.” Testers weight-load a small diamond cone with a 120-degree angle and see how much pressure the metal can handle before suffering an indentation.

The general range is 52 HRC to 68 HRC. These three knives fall in around the 58 HRC to 61 HRC range, which is the sweet spot for sturdiness and flexibility. Anything lower and you start flirting with flimsiness, anything higher and you threaten to break the tip off with one jarring blow. This is the most common HRC range for quality pocket knives. 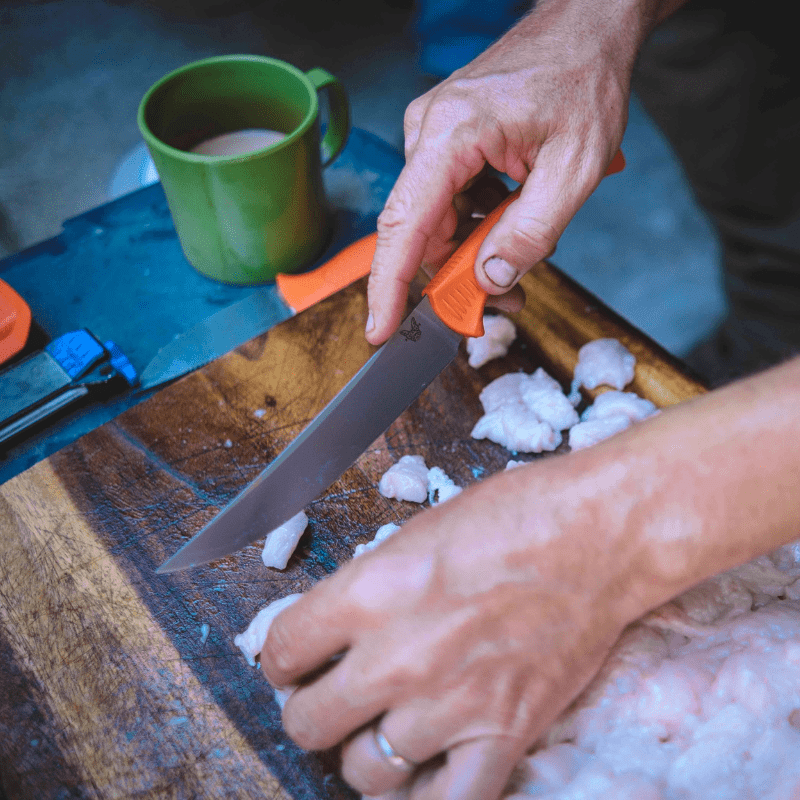 Price: $139.99
"If I could only have a single hunting and fishing knife for the rest of my life, it’d be the original MeatCrafter that I designed with Benchmade.”
Steven Rinella

Steve’s knives have to work as hard as he does, so it’s no wonder he picked the one he helped design. "I butcher and fillet just about everything that passes through my kitchen with that thing," Steve said. "It’s no wonder that folks resell that knife for three times its original value on eBay."

While you can’t get Steve’s exact favorite knife anymore, Benchmade created two similar knives based on the design of the original MeatCrafter. The specs and price we supply here are for the Essential MeatCrafter, but if you’re looking for a more premium option, you’ll love the MeatCrafter 2.0 which shares many characteristics with the original model. 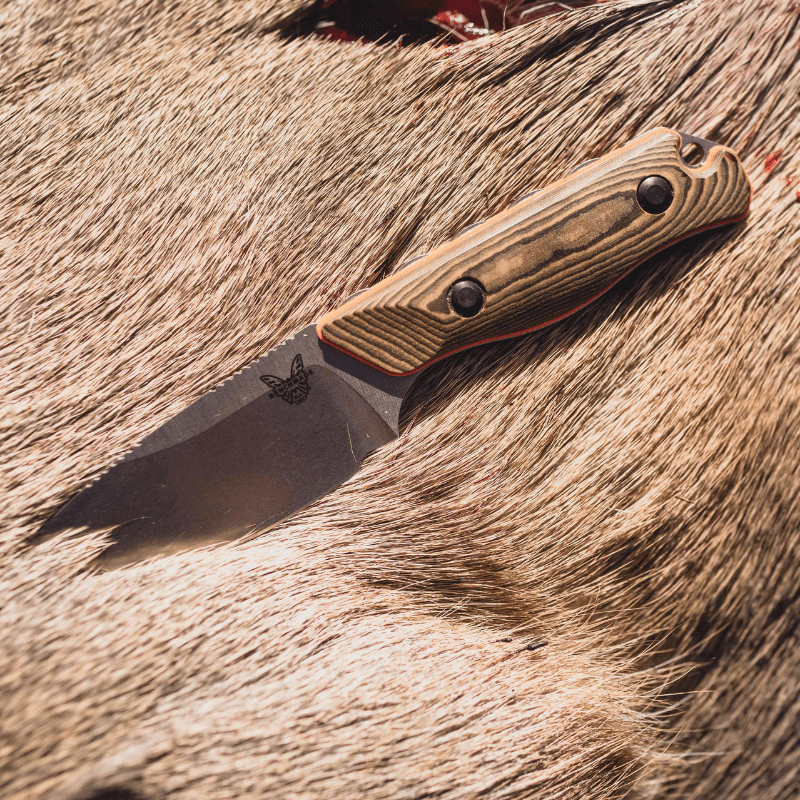 For long trips in the whitetail woods, Mark looks to lighten his load as much as possible, and his pick helps him do that. "My favorite hunting knife is the Benchmade Hidden Canyon," Mark said. "It's sharp as hell, sturdier than an ox, and just about as compact as you can get in a full tang drop point blade." 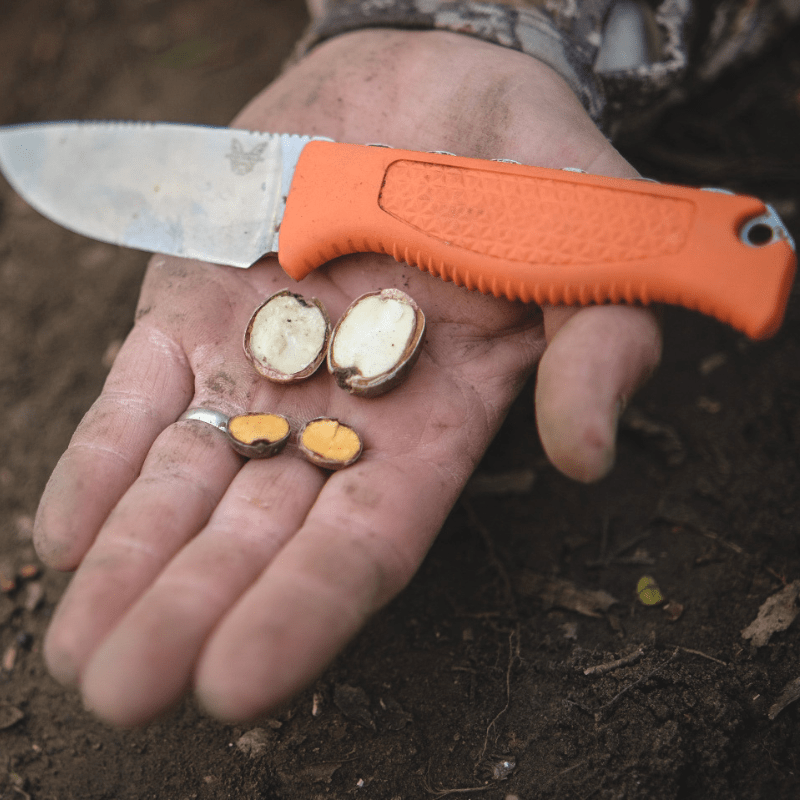 Price: $114.99
"It's small enough to be light, yet big enough to fill my hand securely."
Janis Putelis
"I like a sheath knife because I don’t lose them easily."
Clay Newcomb

With the variety of hunts Janis goes on, a versatile knife is crucial. "I'm partial to the Benchmade Steep Country. It's small enough to process a rabbit, and big enough to skin and gut an elk," Janis said. "It also has a highly visible orange handle which is made of a tacky. rubberized substance for good grip. Last but not least, it's sharpenable by yours truly; with the right sharpener you'll never be without a sharp blade."

The Steep Country’s versatility works for all of Clay’s skinning needs, too. "I love the Benchmade Steep Country knife," Clay said. "It’s just the right size for serious skinning of big or small game. It sharpens quick and blade shape is great as a multi-purpose knife."

Save this product
Benchmade
Essential Meatcrafter™️ Knife
$180.00
A hybrid hunting fixed blade with a fine, smooth edge to trim, debone, or slice your preferred cuts of meat. Makes just as much sense in the back of your truck as it does in the kitchen drawer.
Shop Now
Save this product
Benchmade
Hidden Canyon Hunter Knife
$234.00
A perfect hunting companion, the Benchmade Hidden Canyon Hunter is a premium fixed-blade knife designed for hunters everywhere.
Shop Now
Save this product
Benchmade
Steep Country Knife
$162.00
A versatile fixed-blade capable of performing throughout any season, on any species.
Shop Now
Save this product
Benchmade
Meatcrafter® Knife 2.0
$405.00
Simply the best boning, processing, and cooking knife available on the market.
Shop Now
Get the latest in your inbox
Subscribe to our newsletters to receive regular emails with hand-picked content, gear recommendations, and special deals.
Our picks for the week's best content and gear
For the whitetail obsessed, with Mark Kenyon
Redefining our connection to food, with Danielle Prewett
Your one-stop for everything waterfowl, with Sean Weaver
Get out on the water with the MeatEater Fishing crew
Technical hunting apparel
Purpose-built accessories for hunting and fishing
Quality elk, turkey, waterfowl, and deer calls
Privacy Policy

The backpack you choose could make or break your hunt—and back. Much like boots and broadheads, every hunter seems to have their own thoughts on the best hunting backpack, and it’s largely a personal choice based on conditions, country, and quarry. But after carrying gear and game in countless configurations, we’ve crowned these the top picks that’ll have you covered for any big game hunt. Jump to: The Hunting Backpacks We Use What We Look for in...

Every hunter with much experience under their belt has suffered through painful blisters, numb toes, and aching feet. It’s tough to focus on quarry when your dogs are barking and bloody. That’s why it’s critical to find the best hunting boots for the job, whether that’s all-day rut sits or early-season stalks. After field testing dozens of models, we’ve narrowed it down to a few of our favorites. Jump to: The Hunting Boots We Use What We Look for...

Ask a dozen bowhunters what the best hunting broadhead is, and you’ll likely get a dozen different answers. From one-piece fixed heads to three-blade mechanicals to the hybrids that fall somewhere in between, dozens of broadheads saturate the market and make choosing the right model an overwhelming challenge. But with many years of bow kills under our belts, we’ve narrowed down the list to a few of the best options for just about any North...