Snook Salvation: What We Stand to Lose in Florida

It was a good cast, even the veteran guide behind me said so. Forty feet in front of the largest snook I’ve ever seen and hardly a splash. The fish even stayed course along the wall of mangroves. Then he saw the fly.

Slowly, almost exasperatedly, the 40-plus-inch snook halted, gyrating his pectoral fins, then made an about-face and lumbered off in the opposite direction. No mud-billowing flush; he just did not want anything to do with the bad vibes in the water over there.

I quickly picked up the line, changed angle and hauled out another pretty good shot, leading the fish even further this time. The fly landed. The fish continued. I gave the little green Puglisi fiber minnow a helpless twitch. The fish stopped.

Clearly irritated this time, he spun with a flourish to continue on his original heading. I picked up and cast again and then he really spooked. You could have mistaken the hydraulic his tail created for a manatee going under.

For the second time in half an hour, my legs nearly went out. 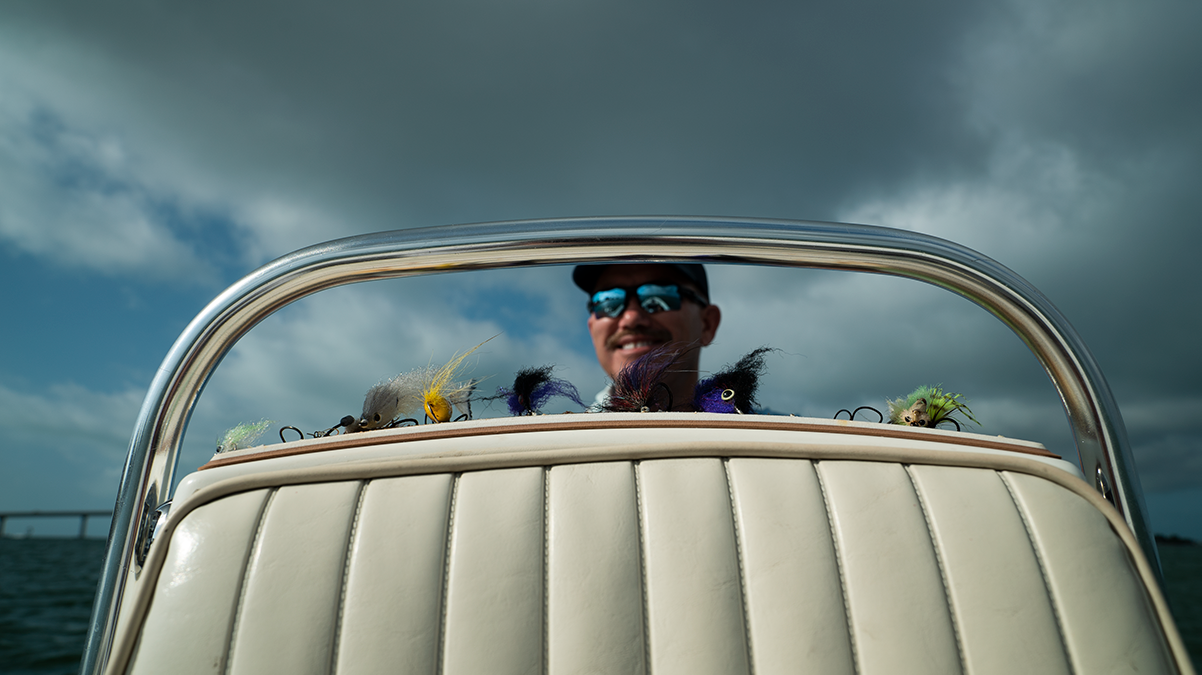 The time I’ve spent fishing around the greater Fort Myers area has been dominated by sitting on top of rental kayaks. I typically abide by that DIY ethic—but damn is it nice to go out with a good guide sometimes. Some fisheries almost demand it. Almost.

With almost 30 years professionally plying Pine Island Sound, Paul Hobby is as about as good as it gets. Our CEO has been fishing with him for a decade and told me Hobby is somebody I simply had to talk to for my coverage of the South Florida water management debacle, being on the water longer than almost anyone out there. Hobby said he had three hours to spare, mid-day on his day off, and I gladly jumped at the chance, assuming we’d be getting on the water simply for the photoshoot and interview.

Turns out three hours mid-day had a lot more to do with the timing and duration of the tidal flood than with Hobby’s list of chores from his wife. Spend that many thousands of days out on a certain waterbody and you’ll get to know where the fish will be and when.

We hadn’t even left the boat ramp before Hobby launched into politics. That’s what I came for, but I’m used to fishermen holding those feelings about as close to the chest as their favorite fishing holes. He wanted me to know that he’s a Trump guy. And that, like the president, Florida’s new governor was keeping his campaign promises. Specifically, the ones about fixing the toxic freshwater discharges from Lake Okeechobee west into Pine Island Sound and east into Indian River Lagoon and restoring the natural flow south through the dying Everglades.

“Ron DeSantis hit the ground running,” Hobby said. “I don’t even think he had an inauguration party.”

On his second day in office, January 2019, DeSantis asked every board member of the powerful South Florida Water Management District to resign. Going against the wishes of voters and the best path forward outlined by scientists and the conservation community, the board had leased land slated for an expansion reservoir to sugarcane companies, just three days after DeSantis’ election. That board, widely considered to be shills for the sugarcane industry, allowed the management of Florida’s water to spiral further and further out of control.

“They were handcuffed and bought-and-paid-for by… somebody,” Hobby said. “We needed new blood in there. There’s the saying, you don’t wait ‘til your house is on fire to dig a well. Well, our house is on fire, the environment. And somebody has a speak up for those poor animals and fish and everything else we have to take care of.”

Hobby has two sons in their 20s. As they grew up alongside worsening water quality, declining fish stocks and increasing boat traffic, Hobby advised both of them to not follow in his footsteps, to not become fishing guides. Both are now professional, full-time fishing guides.

“My oldest son caught his first snook before he was one. It was only about 12 inches long, but he got it. And so, I guess it’s only natural then you’d end up being a fishing guide,” Hobby said. “But I worry about that and making a living. I have been so fortunate to raise a family being a fishing guide here in Fort Myers. It’s kind of a dream. I just don’t know what the next 20, 30 years can be for a young man starting in this business. I still worry about that.”

As we rode Hobby’s skiff at Mach 3 across the smooth, inshore waters, he pointed across the inlet.

“Used to be an oyster bar over there,” he shouted over the outboard’s roar. “Used to be a great fishing spot. It’s been dying for 10 years and now there’s no oysters and the mound has sunk three feet. That’s from freshwater.”

Hobby repeated a refrain I heard all week: the seatrout and redfish that he, his sons and thousands of others used to depend on have all but died or disappeared, just like the oyster bars they like so much. Those declines correlate directly with worsening red tide events, as well as the recent appearance of blue-green algae with the neuro-toxic cyanobacteria it produces upon reaching saltwater.

But the snook aren’t all gone yet, as Hobby would soon demonstrate. 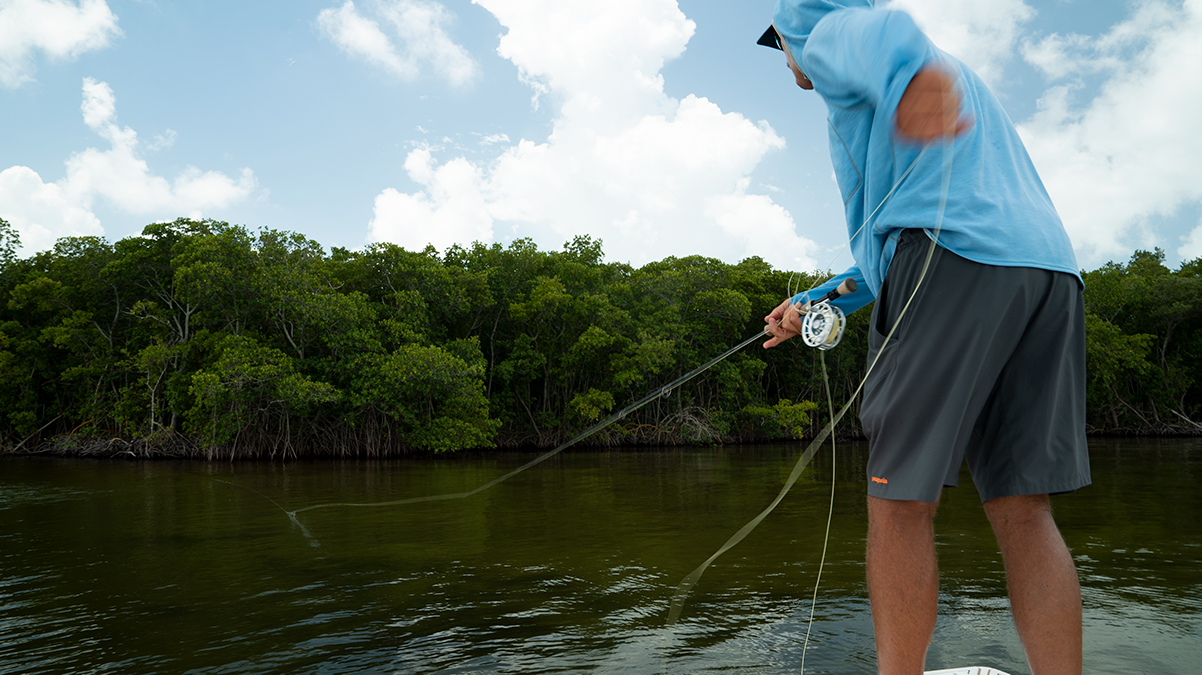 We came off plane a long way off the narrow strip of mangrove-lined, white sand flat between two deepwater channels. Hobby nimbly leapt from the console to the poling platform. I watched a good-sized snook sulk off into the shady vegetation barely minutes after Hobby started push-poling us forward.

The first few hundred yards of mangrove coves and spits appeared barren. I pulled out a 4-pound mangrove snapper (straight into the cooler) and a tiny snook but we didn’t spot anything moving around. Then, at some precise lunar moment the tide shifted course some way, causing somehow optimal hunting conditions for piscine predators. Three mobs of 10 or more snook appeared out of reach or spooked from the boat in five minutes. I rushed casts at two more already-agitated schools, only to accelerate their departure.

Hobby backed us off the tree line; the fish were traveling about 10 yards out. We waited for the dust to clear. And here came my shot: a string of five large snook tracking across us in range. I laid out my fly 20 feet ahead of them and started stripping, short and quick. The lead fish charged, flared his broad, duck-like mouth and engulfed the minnow. I strip-set hard and the snook tore off toward the safety of the mangroves.

Hobby was ready for this and had already started poling for open water as I palmed the whirling reel. Together, we halted the snook just before it reached the intractable mangrove roots. Instead, the fish went skyward, tail-walking and fiercely rattling his gill plates. He made another shrieking run to the west, jumped again, then the line went slack.

I almost collapsed. Still shaking, I reeled up to see what had happened. Where once there was a fly, my leader now ended at four inches of fizzled, shredded 30-pound fluorocarbon. The snook’s sandpaper-like lips had abraded all the way through the thick tippet.

Shortly thereafter, that 40-plus-incher rejected me worse than any pretty girl ever did in middle school. I was hanging on by a thread.

A more compliant 28-inch snook ate my fly half an hour later and was boated without incident. I felt vindicated if not satisfied. But I’d had my fun and, after a bit of pleading, I convinced Hobby to break the first rule of guiding and fish for a bit. I got some photos and he presented to a few fish but then he looked at his watch. It was almost time to get back to the chores. He handed the rod back and suggested we come off our stake-out spot and pole to the end of the flat before we departed.

Right as we were about to drop off the flat, another pack of hunting snook rolled onto it. I cast in front and again they turned from the fly. Instead of leaving, they began daisy-chaining in a tight circle at the shallow edge. Two more casts went unanswered as the fish became increasingly nervous. Hobby told me to cast again, just to right of the clockwise-circling school, so they would see the fly moving away from their direction of travel.

I cast. The fly came adjacent to the school and a large snook broke formation to swipe it, missing by inches. I strip-set hard to no resistance but kept the rod down. Another fish, excited by his cohort’s excitement, charged the fly and ate it hard.

Larger and stronger than the first three snook I’d hooked, this fish sheared toward the safety of the mangroves as Hobby poled us in the other direction. Nine-weight bent to the cork and reel spinning, I dipped my rod tip in the water to create more drag on the line. Stopped barely short of the oyster-sheathed roots, the snook headed for the deepwater channel, quickly reaching the end of my fly line and burning out backing. When I finally controlled his flight, he tore off the other way across the flat, dragging dozens of yards of slack belly as he went.

Eventually the sprinter tired, but he had one more trick up his sleeve—running at the boat. I cranked as hard as the Hatch 9-Plus would allow, wishing fly reels came with a gear ratio higher than 1:1. I caught up just as he came boatside and was able to snag the 34-inch fish by the tail.

We took pictures, released the fish and I announced that I was done; I’d already taken too much time away from Hobby’s Saturday. We would end up talking about the red tide, blue-green algae and Herculean water rerouting efforts afoot in the comfort of the blasting air conditioning of his truck for another 45 minutes at the boat ramp. But I stared for a long time after the magnificent snook as it swaggered back across the flat—a brilliant, bronze-yellow reminder of what we still have, and what we have to lose.

Saltwater ,
Snook ,
Get the latest in your inbox
Our picks for the week’s best hunting, fishing, wild foods, and conservation content.
Big bucks, land management, rut reports, and tips for the whitetail obsessed.
Privacy Policy

The journey continues…
Wildlife refuges aren’t always well understood, but they represent one of...

The journey continues…
Wildlife refuges aren’t always well understood, but they represent one of...

Photos: Florida Man Attacked by Shark After Bite from Gator

Justin Stuller is well on his way to some kind of Floridian grand slam. After enduring a nasty...

Justin Stuller is well on his way to some kind of Floridian grand slam. After enduring a nasty...

Run of Show: What to Expect on Your First Offshore Charter

The best cowboy is the one who’s in the way the least. Same goes for greenhorns—those of us who’re...

The best cowboy is the one who’s in the way the least. Same goes for greenhorns—those of us who’re...