Joseph Wilson had never seen a tiger shark before. So, when the 22-year-old from Lutz, Florida, saw a boat come up the Chassahowitzka River dragging one by the tail, he asked to take a photo with it. The image immediately went viral after he posted it to social media.

Although he technically had nothing to do with catching the shark, “people are chewing me a new one right now,” Wilson told the Citrus County Chronicle. Maybe he should have expected that.

Wilson quickly learned that it is unlawful to land, harvest, possess, purchase, sell, or exchange tiger sharks according to Florida Fish & Wildlife Commission regulations. While he didn’t necessarily play a role in the illegal capture of the shark, his face is associated with the crime. “I called FWC myself,” Wilson claimed.

According to an unnamed witness, one of the men who caught the shark gutted it in the river, spilling blood into the water where people were swimming and recreating. “You can’t torture an animal like that, number one. And you have to know what species you are allowed to harvest and what species you’re not,” the witness said.

While Wilson is dealing with criticism and the wrath of the Internet, the two men associated with the illegal catch are facing second-degree misdemeanors.

“The FWC is aware of the incident that took place over the weekend on the Chassahowitzka River involving a tiger shark,” FWC spokeswoman Karen Parker said in a statement. “The FWC takes this very seriously and is grateful to everyone who reported this incident.” 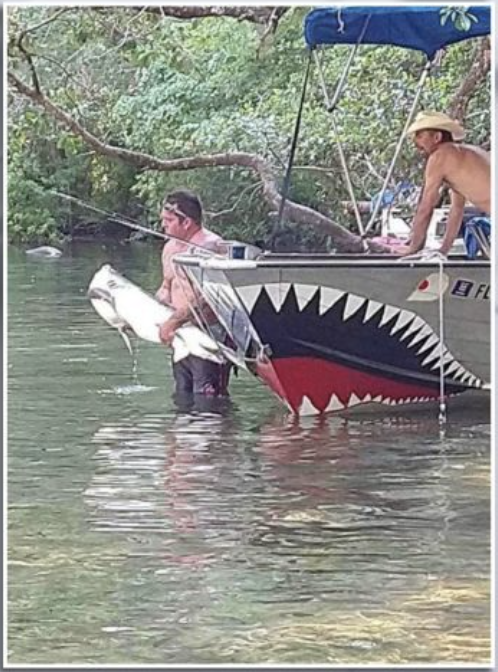 According to Fox 13, FWC used images from social media to identify the suspects and have issued “notices to appear” but have not yet publicly identified the individuals.

Beyond the legal and ethical ramifications of these Floridian’s actions, Wilson included, they undermine legitimate shark fishing in Florida.

“Sharks are a huge part of the fishing culture in Florida. They always have been,” said Joe Cermele, host of B-Side Fishing and MeatEater’s senior fishing editor. “Florida has a thriving land-based shark fishing scene. I’ve fished with some of the veterans that have been doing this for many years, and the good guys—the smart ones, I should say—understand that public perception of their sport matters.”

Joe says that the hardcore shark community goes out of their way to avoid this kind of bad press.

“The smart guys go out of their way to not draw too much attention to what they are doing. They fish at night, prioritize a fast, healthy release, seek out beaches with less tourist traffic, and leave no evidence by way of blood, bait, or trash that let all the swimmers and sunbathers know they were there the night before. There are so many legitimate shark fishermen in Florida, but actions like this will do nothing but paint them in a bad light.”

The charges to be brought against the men who killed the tiger shark will likely act as some deterrent against future behavior like that.

This is by far our favorite bipod out there. Light, easy to use, and quick to connect, this is the perfect bipod for backcountry hunting.

Built to withstand a lifetime of hard use in the whitetail woods, the Whitetail Catalyst Bib Pant will become your go-to from the season opener 'til the leaves begin to fall.

Shop now
Get the latest in your inbox
Subscribe to our newsletters to receive regular emails with hand-picked content, gear recommendations, and special deals.
Our picks for the week's best content
For the whitetail obsessed, with Mark Kenyon
With Joe Cermele and Crew
Technical apparel for the avid hunter
Purpose-built accessories for hunting and fishing
Quality elk, turkey, waterfowl, and deer calls
Privacy Policy

If the video doesn’t play, follow this link to YouTube to watch. This video, captured by B.E. Judson, a retiree from Cody, Wyoming, shows a rarely seen battle between a mature bull elk and a grizzly bear. Ms. Judson, who captures videos primarily to share with her grandchildren, had been living in a tent since the end of May. September 18 was supposed to be her last day camping out and she was cruising slowly through the Hayden Valley in...

I walked along a remote Cape Cod beach at last light. The full moon had just popped above the horizon and the soft, east wind promised great fishing. A young woman stood at the water’s edge. Her black ponytail stuck out from the back of her faded Red Sox hat, and she watched her two young kids splash in the water. Her husband dozed on a beach blanket near the bonfire. She smiled as I passed. “It’s a nice night for fishing,” she said. “That’s for...

Editor’s Note: MeatEater mistakenly included images of the wrong people in the earlier version of this story. We’re very sorry for that error and apologize to anyone affected. Four southwest Mississippi men have been sentenced for poaching wild turkeys in multiple states. In addition to killing in excess of the legal limit, they did not have licenses and were illegally transporting the animals across state lines. According to MDWFP, a group of...