How to Fight and Land Big Fish through the Ice

When I get to the tip-up, the silver spool spins fast enough to raise bubbles in the hole. It slows to a moderate spin, consistent, without stopping. I give a thumbs-up to my dad who trails behind me. He picks up his pace, navigating the lake’s crusty snow cover on his one good knee.

By all indications, a large northern pike has taken our six-inch golden shiner. Smaller pike, I’ve found, run in short bursts—peeling line from the spool then stopping abruptly, only to start up again. The truly big fish—trophy specimens upwards of 15 pounds—tend to take line consistently, stopping only to turn the bait around in their mouths to swallow it—if they pause at all.

My dad catches up. He peers into the dark water. The spool continues to spin at a steady pace. “That’s what I like to see,” he says. “Think it’s ready?”

“Let’s give it a few more minutes,” I tell him.

I learned this patience from my buddy, Luke, who targets deep-water trophy pike and catches them more often than anyone I know. He drives to a sprung flag, shuts off his four-wheeler, and chats for a while. At first, I thought he was crazy, or that he’d become desensitized by all the big pike he’d landed, but then he explained himself. The longer he waits, the better the chance the pike has taken the bait (and his hook) deeply, and the better his chances of hooking the fish. With large bait, a pike sometimes grabs the tail or head, so that on its initial run the hook may not be inside the pike’s mouth. Waiting a few minutes, which often feels like an eternity, will allow the pike to take the large bait, run, and swallow.

We wait as long as we can. The fish never stops swimming. My dad has the honors, so I lift the Jack Trap and he plays out some slack line into the hole.

Tending the Trap
Landing a trophy northern pike or lake trout—two of the largest species available in my home state of Maine—is a two-person operation. I stand facing the hole, watching my dad’s every move. I hold the trap by its vertical wooden beam so the spool can turn freely when the pike runs.

My dad pulls in the slack line hand over hand, and I carefully add the line back to the spool. Jagged, hard-frozen ice bits surrounding the hole make great line-snags. If you hang up on such obstructions when a 20-pounder runs, you’re in trouble, especially when fishing fluorocarbon leaders as we are this morning. It’s a sure bet for a break-off. With the two-man system, slack line doesn’t have a chance to snag on-ice obstructions as it’s pulled in. On warm-weather days, when the ice surrounding the hole is smooth, slack line is less of a hazard.

My dad pulls the line tight and sets the hook with a swift, upward sweep. He gains line, a few feet or so, and then the pike runs.

“Big girl,” he says, as line rubs through his fingers. He lets the pike run, maintaining some pressure but never trying to stop the fish.

I hold the trap and the spool turns. The pike takes 50 or so feet of line before slowing. As soon as it stops, my dad applies pressure and starts pulling again. I wrap the retrieved line back on the spool.

The line is angled sharply, so Dad stands on the opposite side of the hole, his hands directly above it, maintaining a direct line to the fish to minimize slack. The pike runs again—an even longer dash.

“Bring in the closer,” I joke, happy to take over for him.

We trade spots—me taking the line carefully and my dad handling the tip-up. I pull the blaze orange line hand over hand and feel the weight of the fish.

I pass the white button that marks where our bait was set 4 feet up from bottom, so I know there’s about 20 feet of line and leader between me and a big pike.

“Careful when she gets close,” my dad says. His point is well-taken—big pike freak out at the sight of the hole. It happens almost every time.

I gain another 15 or so feet, pulling slowly and steadily. Down the hole I see the swivel that joins running line and fluorocarbon leader. I lift and the pike’s massive snout appears, filling most of the 10-inch hole. The pike comes to life, twists, and dashes off. Line burns my fingers as it flees and I hear the rattle of the metal spool.

At this phase of the fight, I’m reminded that the ice angler is the drag system, a crucial element when fighting big fish through the hardwater. With conventional tackle—a jigging rod in this case—the reel’s drag system makes the fish work. The pressure comes from rod bend, drag, and reeling. When fishing tip-ups, the angler is in direct contact with the quarry—a literal line from the angler’s hands to the fish. If I clamp down and restrict this big pike’s movement, especially at close range, its razor-sharp teeth might fray the leader. With large salmon and lake trout, clamping line on a running fish might break the leader regardless of abrasion. I let the pike run; line slides through my fingers. As soon as it stops, I apply pressure and pull the fish back against its intended path.

Over and over the pattern repeats itself: the pike dashes, tires, and I gain line. Five times it bolts when it sees the hole. Each run gets shorter: 40 feet, then 30, and so on, until the tired pike twirls, gator-style, and rests beneath the ice, its huge mouth gaping and the wispy leader rubbing against sharp teeth.

End Game
We’ve reached the critical moment. As with any long battle—pike, trout, tarpon—the leader is more vulnerable the longer the fight lasts. The pike is exhausted. Now is the time for the face-grab.

Less-experienced anglers often lose big pike during this phase. When they first see the pike, their reaction is—aside from screaming—to lift the fish from the water with the line. This is a great way to break swivels and leaders. In the water, a 25-pound pike weighs much less than 25 pounds (a matter of physics and buoyancy). A 25-pound pike dangling in the air weighs 25 pounds, plus the torque and suction of lifting it through the water.

Given this pike’s nasty chompers, my first end-game goal is to avoid its open mouth. I’d like to keep all my fingers. I lift the leader gently and position the sleepy pike beneath the hole. I pull upward once the snout is halfway across the hole, so the fish shifts from perpendicular to vertical. It doesn’t like this very much—the pike rolls and boils in the hole. As this is happening, I give the leader slack to save it from further abrasion. The pike quiets and I slide my right hand along the underside of its jaw, searching for and finding the sweet spot where the gill covers meet, a good hand-hold shaped like this: ^. If you’re planning to keep and eat the fish, a gaff is a useful tool at this stage.

I slide my fingers in and lift the massive pike, careful to support her sagging belly as soon as she’s above water, so as not to damage her spine. Large fish like this one are not designed to be held vertically by their heads: doing so might cause irreparable spinal column damage.

It’s a beautiful pike: fire-orange tail, vermiculate patterns and greens and browns and blacks. The hook is buried, so I snip the leader near the mouth. It will rust or fall out soon. We quickly weigh the fish (just under 18 pounds), then I slide it back in the water, tail-first, holding the same sweet spot while my dad fiddles for his cell phone. It’s best to keep the fish wet (to avoid flash-frozen eyes and damaging the important “slime”). When he’s ready we take a few quick pictures, and then I get to work reviving the big female.

Revival
Reviving the pike is a slow process, especially since we played it to the point of exhaustion. The fight lasted about 10 minutes, so I spend nearly that amount of time reviving her. I grab the thick wrist near the tail and hold the fish face-down in the water. Rather than lifting the pike up and down, I hold it gently and allow it to revive on its own. Slowly, I feel the pike regain strength. The pectoral fins start to dance and the pike sways back and forth. Its flanks ripple and its tail twitches against my forearm. When reviving, I pay attention to the signals from each individual fish, never releasing one before it kicks out of my hand on its own. This pike does just that—a hard charge, and then there’s only a boil settling in the hole where the trophy pike used to be. 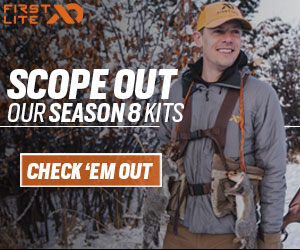 Freshwater ,
Get the latest in your inbox
Our picks for the week’s best hunting, fishing, wild foods, and conservation content.
Big bucks, land management, rut reports, and tips and tricks for the whitetail obsessed.
Privacy Policy

Five Flies You Should Tie During Quarantine

You love to snare hogs with big, nasty streamers. You’re all about that triple articulation. I...

You love to snare hogs with big, nasty streamers. You’re all about that triple articulation. I...

By the third hour of our six-hour smelt shack rental, I’ve come to reconsider the true reason...

By the third hour of our six-hour smelt shack rental, I’ve come to reconsider the true reason...