I came to pike fishing by way of salmon, which is to say I was utterly unprepared. Landlocked salmon—the preferred quarry at the outset of my ice fishing journey 20 years ago—require delicate leaders, small hooks and pin smelts pierced gently beneath their dorsal. Call it finesse ice fishing, if such a thing exists.

What did I know about northern pike? Not much. A biologist acquaintance told me that pike were illegally introduced into the Belgrade Lakes system before I was born; that the Maine state record of 31.2 pounds came from the North Pond—the headwater my hometown was built around; that they eat big things—up to half their body weight; and that two 50+ inch fish were trap-netted in nearby Long Pond. Long Pond used to be a premiere landlocked salmon fishery but introduced pike and a decline in water quality changed that.

After a decade of salmon fishing, where a four-pound specimen is brag-worthy, fish the size of trophy stripers lurking in my backyard grabbed my attention, even if they did contribute to knocking down the natives. To catch a large one through the ice seemed nearly impossible. So, I began reading up on strategies to target them.

Pike gravitate toward shallow, weedy bays with access to deep water, or so said the predominant literature. But the Belgrade Lakes are deep—60 to 90 feet in places. The primary food source for pike there, landlocked alewives, ball up in the deep basins in winter. I fished shallow weedy bays early in the season, just like the books suggested, and caught small pike, but nothing like the ones I’d heard about. On a hunch, I moved to deeper water.

My father and I tested my theory on Great Pond, in the Belgrade chain. This was early January, the ice barely three inches thick. We set ten tip-ups, all but one with pliable wire leaders, the kind used fly-fishing, which allow bait more range of motion than traditional wire. To the leaders we snelled 3/0 J-hooks, baited with large golden shiners. We fished in 30 feet of water, our baits four feet from bottom. 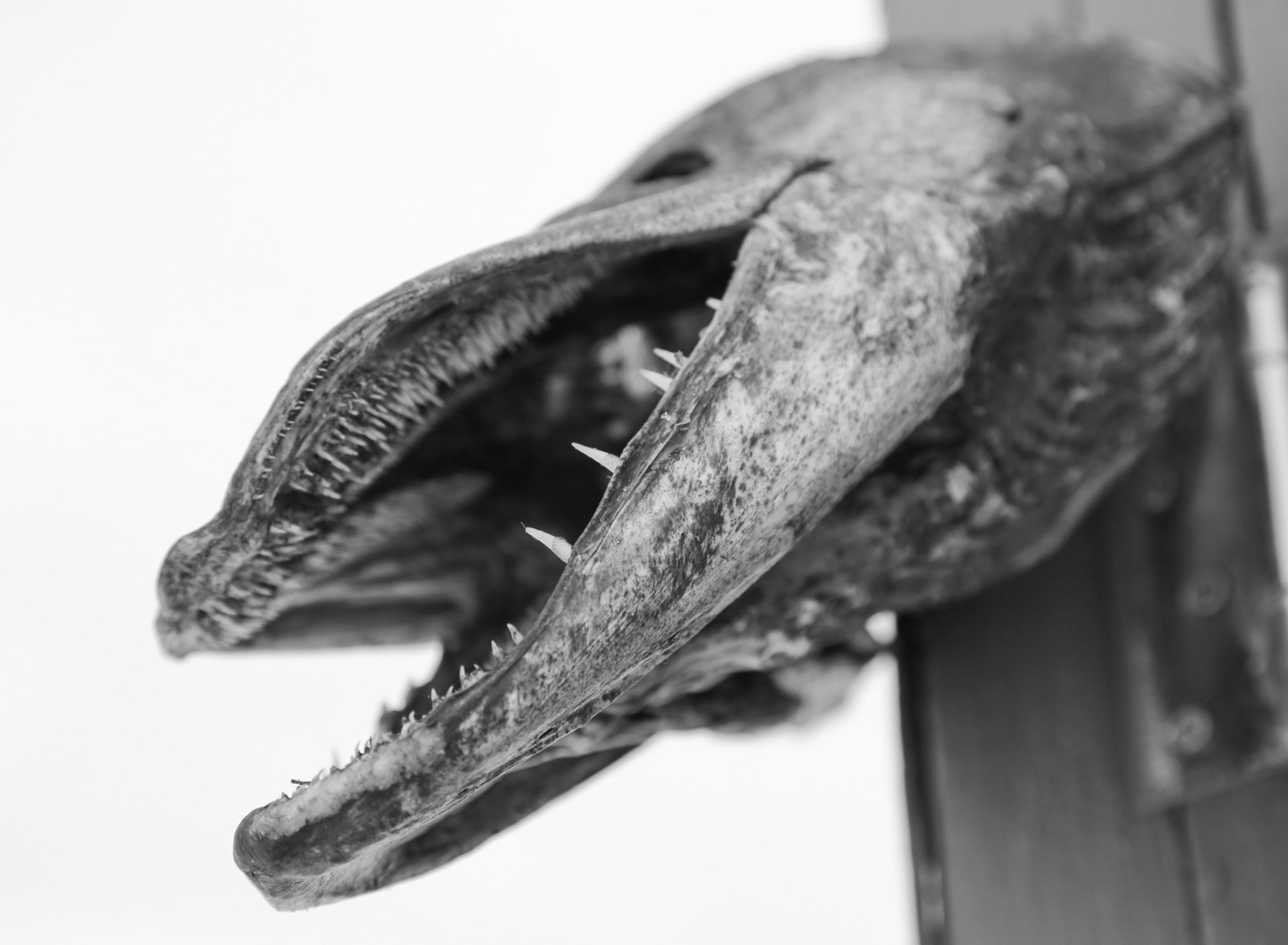 Around 9:30 that January morning, our first and only flag sprung. When we got to the trap, its spool turned slowly but steadily. I recognized the trap as the only one without wire leader. This one had thirty-pound fluorocarbon; we were about to conduct a high-risk experiment.

The spool never stopped turning. I lifted the trap and Dad took the line. He got tight and set the hook, and then the fish ran.

He fought that pike well for 15 minutes, then his back gave out. “You take over,” he said.

Each time it ran, I let line slide through my fingers. When it stopped, I pulled. The pike flared at the hole, ripped twenty feet of line, then conceded the same amount. Finally, it laid underneath the thin ice, spent. I reached into the water and found the soft underside of its gill plate.

When I lifted it from the lake, Dad hollered, but all I felt was awe being that close to such a large specimen. Fluorocarbon dangled from the corner of its jaw, surprisingly intact amidst terrifying, razor-sharp teeth. I wondered how many alewives and shiners had seen those teeth before the lights went out.  Examining the leader, I found only minor abrasions, even though the fish had swallowed the hook. The pike was well over 40 inches and weighed 24 pounds.

Not long after, I switched to 30 pound fluorocarbon leaders exclusively. Our bites increased—more flags, more fish.  My theory holds that deep-water pike in relatively clear lakes—like the Belgrades—are leader shy. Sure, anglers fool large pike on conventional wire leaders (especially during spring, in shallow, murky bays). But the suppleness of fluorocarbon, combined with its translucence underwater and abrasion-resistance, provide strength and stealth. Break offs are rare so long as anglers allow the pike to run and don’t lift them from the water by the line. In a dozen years of pike fishing with fluorocarbon, I’ve only had one break-off, when an over-zealous client clamped down on a large pike near the hole. 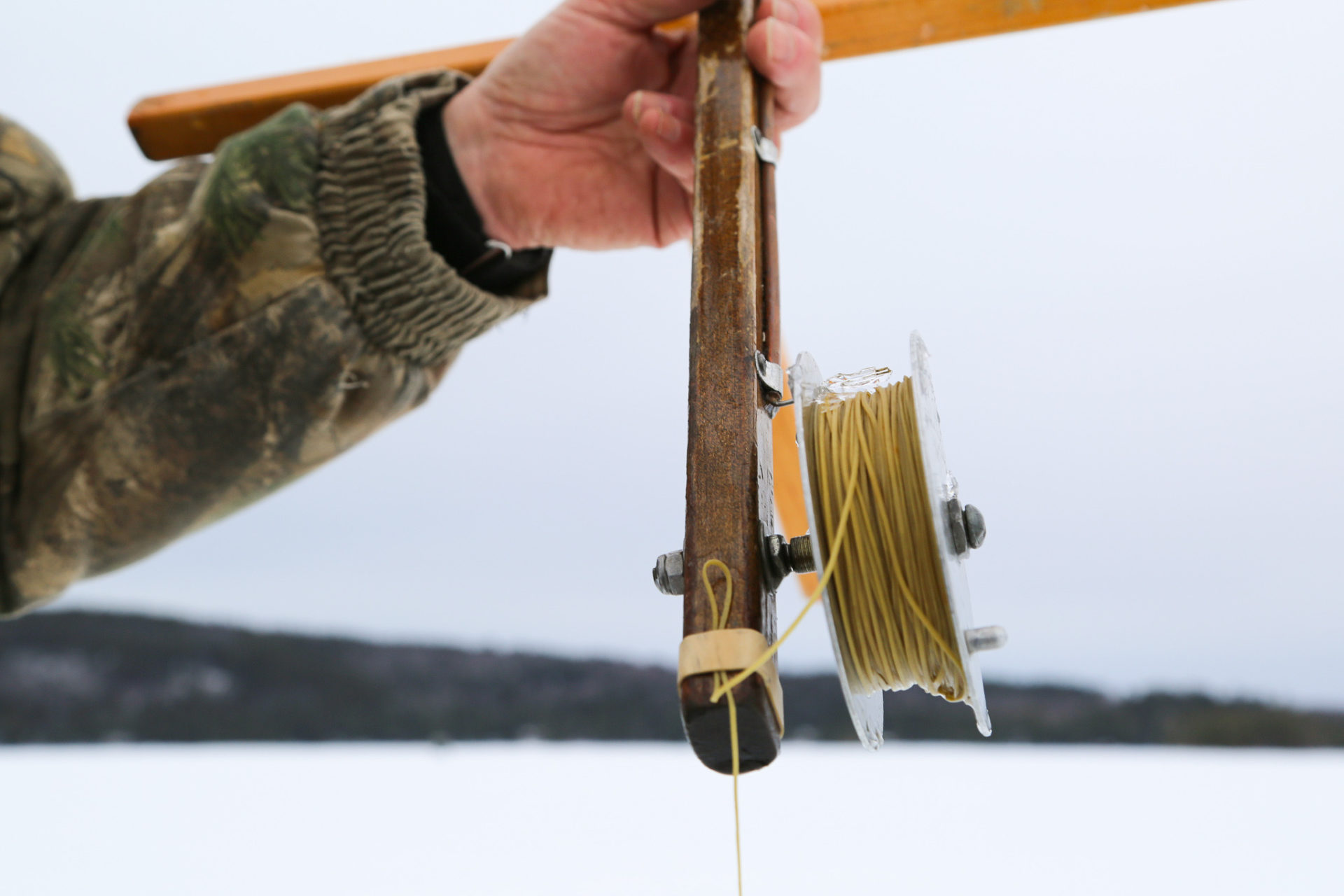 I’ve experimented with knots attaching hook to leader. A straight snell works, but often kicks the hook to the side, causing the baitfish to swim at an unnatural angle. After testing various alternatives, I landed on the non-slip loop knot: a simple, saltwater fly fishing knot that allows maximum range of motion without compromising strength. Since it holds up against hundred-pound tarpon, I figured it’d do the trick for 40-inch northerns. It does.

There were, however, other problems. Six to 8-inch shiners—the sweet spot size for the Belgrades—are large enough to trip our traps. Tightening the spool is out of the question, as any tension will cause pike to drop the bait.

At some point along the way—neither Dad or I remember when—we ran into an angler using rubber bands in an ingenious way. This guy wrapped rubber bands around the bottom of the vertical crossbeam, below the trap’s spool. Then he doubled the line and slipped it up and under the band, creating a cheap and effective bait-holding technique: The band offered enough resistance to prevent shiners from tripping the trap, but the line slipped through easily on a take. We adopted this technique for ourselves but upgraded from conventional rubber bands to the heavy-duty ones used to bind lobster claws.

We return year after year to that same spot on Great Pond. The techniques I’ve learned have yielded multiple 20-plus-pounders, and dozens in the 10 to 18-pound range. Thirty-pound fluoro, tied with loop knots to 3/0 hooks tipped with large shiners swimming naturally are consistently effective. The rubber band trick gives us confidence that when a flag flies, there’s likely a pike on the other end, maybe as big as that first one. Maybe bigger.

Ice Fishing
Get the latest in your inbox
Subscribe to our newsletters to receive regular emails with hand-picked content, gear recommendations, and special deals.
Our picks for the week's best content
For the whitetail obsessed, with Mark Kenyon
Redefining our connection to food, with Danielle Prewett
With Joe Cermele and Crew
Technical apparel for the avid hunter
Purpose-built accessories for hunting and fishing
Quality elk, turkey, waterfowl, and deer calls
Privacy Policy

We stood in the trees near the shoreline, waiting for sunrise. The morning was frigid and windless. A few feet beyond, lake ice folded against land. As far as I could tell, we’d be the season’s first ice anglers; it was early December and a week-long cold snap had hardened my favorite local lake. In a month’s time the lake would be dotted with shanties, alive with the echoes of power augers and snowmobiles, but this morning it was empty and...

Spearfishing through Ice: Modern Adherents to an Ancient Tradition

After six hours, my eyes start to water. Sitting in a dark house and staring through a wide hole in the ice takes a mental toll, but when a 40-plus-inch pike swims into view, I perk up . I wait while the beast surveys the old, hand-carved decoy swaying in the current. Slowly, I dip my trident spear into the water, taking care to not startle the hovering fish. Before I can throw, the fish bolts without warning. A lost opportunity? Perhaps, but a...