How to Choose the Right Fishing Lure Color

The cliche way to kick off any article about selecting lure colors is to suggest that you’re overwhelmed by the process. There are just sooo many options at Wal-Mart you wind up in the fetal position, shaking on the floor in aisle 35 from the mental stress that comes with choosing five lure colors for your next trip to the park pond. I’ve never known anyone that anguishes too much over these decisions, but I have known plenty of anglers that insist watermelon-green flake is the only color tube worth throwing. Don’t even come at them with the watermelon-purple flake.

I don’t buy that this level of detail is critical, but I will admit that the right lure or fly color is based on personal confidence as much as science, and that the science is much easier to break down than many pro anglers would have you believe. In fact, every single color on the market—from plain white to Dirty Sanchez to Chicken Scratch—can be placed in one of three tone categories; lights, brights, and darks. All you have to do is see past the scale patterns and stripes and embellishments that often catch the angler’s eye first and focus on the base colors. Once you have a basic understanding of the benefits of each tone, you’ll look at lure and fly color selection differently, and nobody will have to mop you off the floor at Wally World.

Lights
Ask seasoned anglers what they’d pick if they could only ever fish one color for the rest of their lives and a lot of them will say white. It’s super-boring and very underwhelming, but white is arguably the most universally productive color of all time. Most baitfish in both salt- and freshwater have white bellies. There are very few predator species that don’t lock in on something white and twitchy as a meal.

White falls into the light category, but so would pastel tones, light grays, soft pinks, and pale yellows. More so than other tones, lights are equally effective in clear and stained water. In clear water, a muted tone tends to be less obtrusive to wary fish, and since they have more time to study a lure from a distance, there’s benefit to presenting natural colors that closely mimic baitfish. At the same time, light tones are reflective, so in stained or deep water where less sunlight reaches, they’ll still pop and ramp up visual appeal. 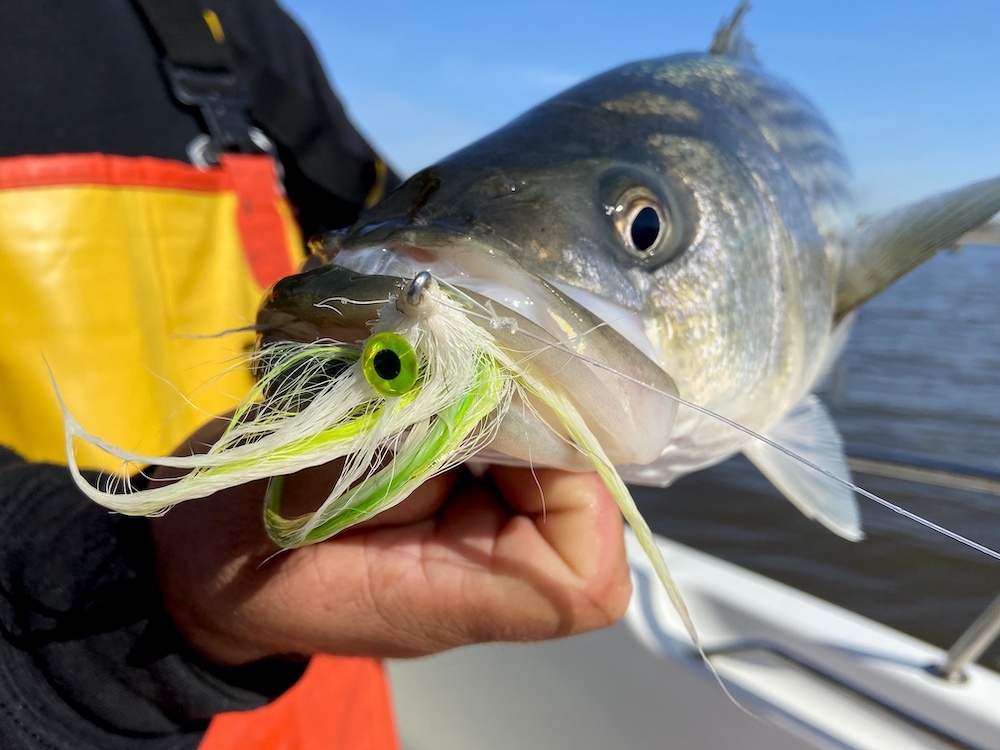 Brights
“If it ain’t chartreuse, it ain’t no use.” I hate this old adage, because I find it largely false. Chartreuse is bright, and brights have a time and place, but for me, it’s not all the time. Any lure or fly that incorporates a lot of neon or “loud” colors I classify as bright. I also put baits and bugs that are predominantly flashy metallic in this category. There’s a reason why crossing guards wear neon orange vests and your aunt puts on every piece of gold jewelry she owns before going to the casino; they want to stand out and be noticed.

One might assume that lures and flies that can be seen from a mile away would always be beneficial, but there is such a thing as too gaudy and too flashy, especially in clear water. Most of the time, I’m leaning on neon in heavily stained to downright dirty water. I may also opt for a screaming neon jig or fly if I’m targeting fish in 15 feet of water or more. Before everyone jumps down my throat and says, “metal lures work all the time, dummy,” I’m not disputing that. You can throw a spoon at blitzing stripers or white bass in clear water on a high-sun day and they’ll pound it. But in situations where you have to use finesse to get bit, you’ll find that lures with minimal or no flash will often score faster than those that gleam like a disco ball.

Darks
You won’t catch me in the striper surf at night without a plain black Bomber Long A. Nor will you find me throwing a Jitterbug in any other color than black for late-night largemouths. The idea of using an all-black lure in the dark boggles the minds of many angling rookies, but to understand the power of dark lures and flies, you have to understand contrast and silhouette.

In low light conditions or stained water, what fish often key in on before anything else is movement and shape. The true color of the thing that’s moving is pretty much irrelevant. All that matters is that the fish sees the outline and silhouette of something it believes is food. Dark colors create cleaner, more defined silhouettes. Likewise, a dark lure creates stronger contrast when set against darker water. This is why black and purple trout streamers and striper plugs shine on overcast days or anytime there is limited visibility underwater. From our perspective looking down into that dark water, this might not seem logical, but keep in mind everything a fish sees is backlit from above. Of course, there’s also a plethora of forage—like crawfish, leeches, and gobies—that are naturally dark, and you should match their colors regardless of water conditions. But the next time you’re on the lake at first light or the river at sunset, going dark might very well produce a bigger opening or closing fish.

This is the Smartest Fishing Lure in the World

This article comes from the Bent Fishing Podcast’s “Fish News” segment, where hosts Joe Cermele and Miles Nolte go head-to-head to find and report the most interesting and amusing fishy stories across sources far and wide—from respected scientific journals to trashy tabloids. Joe Cermele keeps Bent listeners well informed of all the “horse shittery coming down the pike in lure gimmickry.” But the Model Zero from Japanese company smartLure might...

The World’s Most Versatile Fishing Lure

Simplicity is grace, so they say, and there’s nothing more simple than a single chunk of oblong metal with a hook attached to the back. I find grace in the subtle and nuanced motions you can produce with a simple metallic spoon. You can slow-roll it deep or burn it shallow. You can jig it way down or skip it back across the surface if you have to. You can troll it or suspend it with bait under the ice. Best of all, you can swing it on a tight...

How to Properly Spool a Fishing Reel

If a donut without a hole is actually a Danish, then a reel without line is just a paperweight. In fact, I’ll take that one step further. A reel that’s not properly spooled with line of the proper type and size is going to make you want to pull your hair out. That’s why getting this right is so critical—the alternative is misery. Whether you’re using a baitcasting reel or a spinning reel, changing line regularly and properly is key to making...