Beyond Meat: The MeatEater Muskibou

As hunters, we put a lot of effort into honoring the animals we kill by making trophy meals out of them. But you can take that respect for your quarry to the next level by utilizing more than just an animal’s meat. Mounting antlers or a turkey fan on the wall looks great but fur, feathers, hide, bones, claws, and teeth from small and big game can all be used to make something useful. Whether it’s a turkey wingbone call, a beaver pelt hat, deer leather gloves, or jewelry made from elk ivories, game animals are more than just meat. 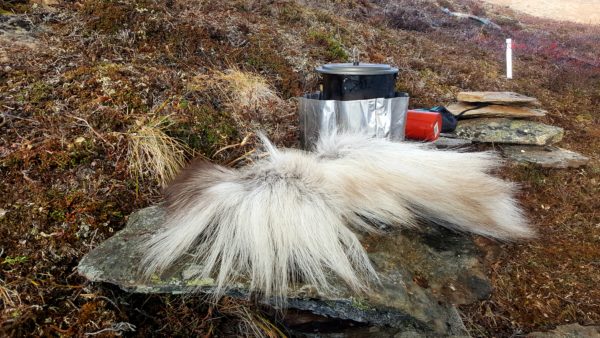 Since I’m a fly fisherman, I’m always on the lookout for fly tying materials sourced from wild game. In fact, many of the commercially sold tying materials can be easily substituted with fur, hair, and feathers from game animals. For instance, I haven’t needed to buy elk hair or pheasant tails for many years. This past September in Alaska when Steve killed a caribou bull, its mane immediately caught my eye. The long, straight, white hair on the bull’s mane was even better than the highest grade bucktail found in the tying section of any fly shop. Later in the fall, Steve gifted me with the tanned mane of a musk ox bull. The musk ox guard hairs were dark, long, supple, and shiny- an idea for a new fly pattern was already forming. 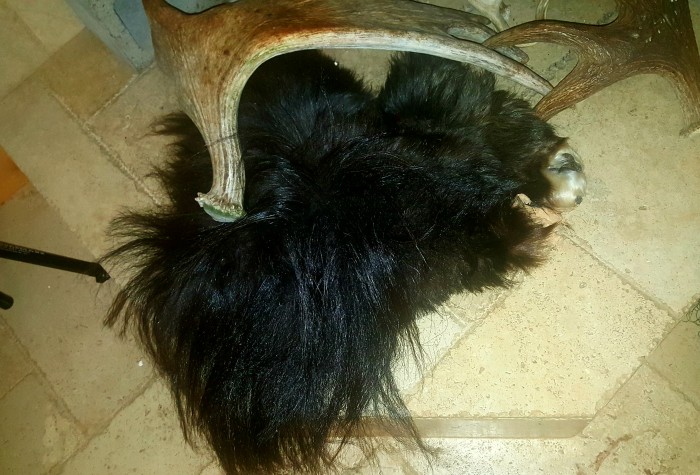 Using these materials, I wanted to create a fly pattern that would work for big, predatory fish like northern pike and sheefish, which live at the same latitudes as caribou and musk ox. The goal was to create a large baitfish streamer pattern with a long body, good action in the water, and an extra “stinger” hook to prevent missing fish that “tail bite” the fly. After a lot of trial and error, I came up with the MeatEater Muskibou. It’s a big fly meant to catch big fish in fresh and saltwater. But what I really like is this fly has a hunting story behind it, just like the caribou meat in my freezer. And I’m looking forward to bringing things full circle by eating the pike I catch this spring on the Muskibou. 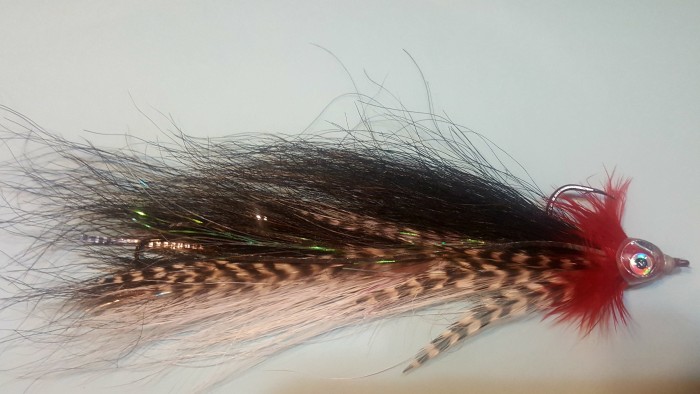 After I’m done tweaking and perfecting the MeatEater Muskibou pattern, I’ll use the elk hide and snowshoe hare feet drying in the garage to come up with a good caddis dry fly pattern for this summer’s trout season. Besides making trophy meals, try utilizing your game animals in other ways.

Shop All
Save this product
13 Fishing
Kalon O Blackout Spinning Reel
$79.99
At home both in open water and in the frozen tundra, 13 Fishing Kalon O Spinning Reels are performance-proven and tested by the most rugged and rowdy anglers we know.
Save this product
YETI
MeatEater Branded Yeti Hopper M30
$299.99
Whether you're into suds, brewskis, seltzers, or vino, if it comes in a can or bottle and is best served cold, the Hopper M30 is the ticket.
Save this product
Spiceology
Mermaid's Trident Zesty Seafood Blend
$9.99
A bright citrus-based blend that is balanced with earthy notes of smokey chardonnay and mild heat to round it out. This unique combination is incredibly versatile, perfectly pairs with your latest catch, fresh garden veggies, or atop roasted potatoes.
Save this product
13 Fishing
Inception Baitcast Reel
$120.00
A lightweight body and super low-profile design provide incredible comfort during long days on the water.
Save this product
13 Fishing
Omen Black Spinning Rod
$130.00
Japanese 36 Ton Toray Graphite , 4A Portuguese Cork Handle, ALPS 316 Stainless Steel Guides with Zirconia Inserts.
Save this product
YETI
LoadOut GoBox 30
The MeatEater crew uses our GoBoxes for storing all kinds of gear, from ammo and range hardware to outdoor kitchen essentials, dog accessories, fishing tackle, and gear, camera equipment, truck tools, and medical supplies. Why buy expensive hunting and outdoor gear only to store it in a cheap plastic bin with a lid that doesn't fit correctly? Elevate your gear protection and organization with this waterproof, dustproof, shockproof, and critter...
Get the latest in your inbox
Subscribe to our newsletters to receive regular emails with hand-picked content, gear recommendations, and special deals.
Our picks for the week's best content and gear
For the whitetail obsessed, with Mark Kenyon
Redefining our connection to food, with Danielle Prewett
Your one-stop for everything waterfowl, with Sean Weaver
Get out on the water with the MeatEater Fishing crew
Technical hunting apparel
Purpose-built accessories for hunting and fishing
Quality elk, turkey, waterfowl, and deer calls
Privacy Policy

Five Flies You Should Tie During Quarantine

You love to snare hogs with big, nasty streamers. You’re all about that triple articulation. I get it, because so am I. Now you’re on quarantine and you’ve got plenty of bucktail, Flashabou, and bunny strips to keep you busy at the vise. When we emerge from this viral madness, your boxes will be brimming with meaty goodness. You’ll be as badass as Snake Plissken on the river. Except I guarantee Snake (and John Connor) wouldn’t be pissing away a...

How to Fish a Spring Creek

If you give any credit to Darwinian theory, human beings evolved from primates living in caves to the most advanced species on the planet by responding to and overcoming environmental and intellectual challenges. Whether we’re training to run a marathon or figuring out how to beat a boss in a video game, we’re genetically programmed to take on what is most difficult, learn how to be successful, and eventually advance to the next level. In the...

Earlier this year, Pat Durkin enlightened us on the art of human catch and release. If you’re looking for poetics about how anglers so often get hooks in places they don’t belong, go read his article. But if your stomach can handle it, stick around here for 12 pictures from our fellow impaled MeatEaters. Be warned: You’re about to see some messed up stuff. “First cast after shore lunch I hook into a 40-inch pike. As I’m handling him, he flips his...