When, Why and How Should We Kill Marlin?

“Ethics in hunting are refreshingly clear: make the most responsible shot possible to kill an animal, and do so with purpose (whether it be for meat consumption, pelt collection, or balance within an ecosystem).  Be humane to your kill, respectful of its carcass, and aware of the finality of such an action.”

It’s understood that the animal shouldn’t be flaunted through town, straddled like an unconscious thoroughbred, or used as a dartboard experiment for aim, angles, or distance.

In hunting, there is a beginning and an end once a kill-shot is made — a bullet cannot be removed so that the animal may live to be shot another day.

I’ve always admired such clarity, but will admit that the more I examine my own grasp on the matter, the less I understand why I participate in catch and release fishing.

If pressed, it’s quite simple really: I’m selfish.  The law requires me to release wild steelhead and, in the case of big trout, I let them go so I might catch them again some day.  In other instances, some fish simply aren’t that great to eat, but are a lot of fun to catch. 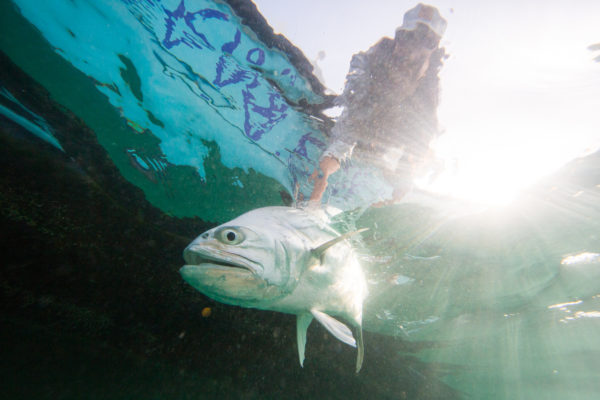 I tell myself that the tradeoff is my willingness to fight for such fisheries, and that fishing them fuels my passion to stay involved.  But the truth is that I’d fight for them anyway.  I’ve caught enough steelhead and trout to guarantee that I won’t be forgetting them anytime soon.  Yup, I’m just selfish.

Playing the Game
With fishing, the code of ethics in catch and release is far more complex and variable — as would be expected in a sport.  Truly a form of “playing with our food,” catch and release fishing is a game between angler and fish that hasn’t been around all that long.  Historically fish were caught to be killed, and fishing was not so much a pastime as it was a way to stay fed.

Where there are games, there are rules, scorecards, records, and egos.  We call that organization the International Game Fishing Association (IGFA).
The IGFA was developed in 1940 to implement a set of rules and ethics to ensure the game is played fair between anglers and fish.  The rules vary per species and size but, overall, they’re designed to give fish a fighting chance.  Anglers can’t be assisted when gear malfunctions, and leaders need to be tied to certain specs (down to the millimeter).  Such a system has taken decades of evolution and has produced some of the finest anglers, knots, and methodologies of our time.

One of the leading arguments against the IGFA is its encouragement to catch fish on light leaders.  Most recently, I caught a marlin on the west-coast of Australia while fishing with captain Eddy Lawler of Peak Sportfishing, and renowned marlin expert, Dean Butler.

For a gal who “just wanted to land one,” I was hoping to tie my fly onto a straight piece of sixty-pound monofilament, but the IGFA’s heaviest approved marlin leader is twenty pounds, and Dean and Eddy couldn’t be coaxed to fish otherwise.

The whole thing seemed absurd and anything but fair.  Landing a fish of that size on such light tippet couldn’t be fair to the fish?  They assured me that I’d be able to pull on it without the line breaking — they were right.
Twenty pounds or 90, I wouldn’t have fought that fish any differently.

It’s important to note that the IGFA has also been on the leading edge of many conservation battles, including its most recent Take Marlin Off The Menu campaign.

However, it has also come with its share of controversy.  For years, the only way a fish could be recorded as an IGFA record was if it were killed and weighed.  While the times have changed and the organization has adopted other measurement strategies, the mighty marlin and its ferocious flailing make it difficult (and dangerous) to get an accurate weight without killing it first.

Today, as beaming anglers accompany their catches to dockside hook hangers, the public screams in anguish at the blatant disrespect of such remarkable creatures — creatures which are, in many cases, on the verge of depletion.

Looking at it as a Hunter
In digging deeper into the controversy, you’ll find that almost all of the disgust towards hanging marlin stems from the sporting element of the kill.  Once records and ovations are removed, the mentality seems to veer in a different direction.

During my trip to Exmouth, it hadn’t been an hour since the plane touched down before Dean started trying to sway my stance on hanging marlin.  “But you’d kill a moose?” he challenged.

That was all I needed to put it into context.

Once a fish is dead, the practices of a catch and release angler are promptly over-taken by the ethics of a hunter.  Personally, just as I won’t kill a moose if I’m not in Canada long enough to eat it, I won’t kill a fish too big for me and my family’s consumption.  While some marlin can weigh up to 2000 pounds, the biggest fish ever landed on a fly rod is 288 pounds, which is about 200 pounds more meat than my family needs.  I’d be keen to keep a marlin, but it’ll likely never be record-worthy.

My decision to kill an animal also depends on the health of fish stocks.  While marlin bag-limits in Western Australia allow the retention of one marlin species per day (meaning anglers can keep one black, one striped, and one blue marlin each day), it’s reported that black, striped, and Atlantic blue marlin stocks are at unhealthy levels.  That said, the Pacific blue marlin is thriving and is even suggested by the NOAA that they’re a choice fish for retention.

Trophy Hunting vs Conservation
When it comes to big game, trophy hunting is frequently misunderstood.  Often times, hunters are looking for hefty, mature bucks that have already lived through the peak of their breeding cycle.  There are even cases where large bucks with limited breeding capacity beat up on smaller bucks that are in their prime. This is just one example of why a hunter may choose to target a mature animal. Such is not the case with marlin.  Most of the larger fish that are caught for records are female, so the fertility argument isn’t as strong when it comes to harvesting them for their size.

In hunting, bag limits are carefully calculated, with habitat typically being the main reason for allocated quotas.  This isn’t the case when it comes to marlin.  It’s obviously much more difficult to determine numbers of fish offshore, and therefore stocks are assumed rather than affirmed.  Guides like Dean and Eddy help to keep this information current by tagging the fish their clients catch.  On average, for every 350 fish Eddy tags and releases, he might kill four of them.  Both Dean and Eddy average about one killed marlin per 100 caught.

Public Perception
I compare hanging a fish at the dock to driving a trophy moose into the local gas station and then hanging it up to take photos in front of spectators.  Naturally, this is going to upset people who find the situation sobering.  Not everyone understands the biology, legislation, or hard work that goes into taking such an animal.  Factor in a radiant smile with flashing lights, and it’s a sure thing intentions will be questioned.

Much of this problem has to do with the public’s mistake of associating large fish as being old.  The pearl perch is a prime example of a species that may appear to be the perfect “table fish” for a dinner party.  It’s the right size, color, and texture of meat.  But a mature pearl perch can take up to ten years to acquire those characteristics, a stark contrast to a marlin.  A 300 pound marlin can be only six years old.  To the uneducated consumer, they may feel they’ve made the responsible decision by choosing a large pearl perch over a 200 pound marlin.  It’s our job to educate the public, but it’s equally their responsibility to want to learn as well.

Historically, when men went out on the mighty blue ocean to spear whales and other sea creatures, they returned to accolades and hungry bellies.  The village set to work processing the animal, and the meat was shared communally.  But that was when lives were intertwined and the community thrived as one.
The very pronounced shift we’re seeing with the public’s distaste towards photos of dead animals and fish is an indication that we’re moving further away from tolerance.  On one hand, we should be respectful to thy neighbor, on the other, it’s important that we don’t hide so far back in the closet that we allow ourselves to become antiquated.

In Summary
It’s hard to have discussions about any fishery without commercial fishermen being pulled into the mix.  One can only imagine if there was a commercial moose opening.  In hunting, it’s really simple.  Want to eat game meat?  Better get out there.

Commercial fishing allows people to treat their palates to the biggest protein assortment in the world.  It’d be interesting to see a world where all wild meat had to be caught or killed by ourselves or someone we know.

Personally, I feel that as long as the stocks are healthy, we should be able to keep the fish we catch without being judged.  As anglers who are given the decision to release our fish, we balance on a slippery slope when it comes to our actions and the perceptions attached to them.  It’s a circumstantial debate, but when it comes to dead fish, I think we could learn a thing or two from the hunters.

For more on this controversial subject check out my podcast with with renowned marlin captain, Dean Butler, and Exmouth guide Jono Shales.

Catch It. Release It? Kill It? Eat It?

This really is a fishing essay, but it comes wrapped in layers. Let’s begin during the course of a...

This really is a fishing essay, but it comes wrapped in layers. Let’s begin during the course of a...

Figuring out how to strategically target fish: the ideal presentation for the current, the best cast...

Figuring out how to strategically target fish: the ideal presentation for the current, the best cast...