While most people hang up their waders when the interior rivers turn to ice, the fishing season is just beginning for many of us in the Pacific Northwest. Many anglers have waited all year to pull their fishing gear out of storage. Winter steelhead fishermen and women are some of the most passionate anglers out there. Keeping on through snowy days, icy guides, wet under-layers, cold thermoses and frozen reels—they’re a dedicated bunch.

However, all too often I see fishermen make some critical mistakes when transitioning from summer-run to winter-run steelhead fishing. The summer steelhead fisheries wind down around November — right at the same time the first winter steelhead begin entering the system. This overlap between the two strains can cause major confusion about when, where and how to fish. Here’s a look at some of the ways you can be better prepared this winter while swing fishing for steelhead from the bank.

Where To Fish For Them
The first step to becoming a better angler for any species is by developing a thorough understanding of the specific fish you’re targeting. While summer and winter steelhead are the same species, there are some major biological differences between the two strains. You’d be right if you guessed that winter-run steelhead enter the freshwater in the winter months and summer-run steelhead mostly enter in the summer, but there are other distinctions that translate directly into how we fish for them.

Winter fish come into the river in a sexually mature state, meaning they’re ripe with eggs and sperm by the time they migrate from the ocean to the river. This maturity plays a role in their migration timing as it forces them to dominate tributaries within 100 miles or so of the ocean. Simply put, they don’t have the time to venture any further upstream.

Cold water and their advanced reproductive state decrease their metabolism, making slow pools and deep troughs their choice of holding water. Winter-runs need to conserve energy and they do so by choosing water that will require as little energy expenditure as possible.

Fly Materials
The water that winter steelhead prefer to hold in plays a substantial role in fly choice. To tempt steelhead in deep, slow moving water you need flies with weight and action, but it can be tricky to give a fly much movement in these conditions. This makes fly materials an important consideration. Natural materials like rabbit, marabou, ostrich and rhea all come to life in the water regardless of current speed.

That said, some of these natural materials absorb water slowly and take a little time in the river before they are fishing right. However, flies comprised of “fluffy” feathers and furs (especially if the hide is left attached) are heavy once they’re saturated. This is beneficial when trying to get the fly to sink, but it can make casting difficult. When compared to sparsely-clad summer-run patterns, winter flies don’t cast as well on subtle tapers and long leaders.

Lines and Sink Tips
For years it was thought that only aggressive summer fish would readily take a fly. It wasn’t until the late 20th century that people believed winter steelhead could be caught that way as well. This misconception was largely in part to the gear being used at that time. While variations of two-handed rods were available, fly lines had yet to evolve into what they are today. Lines were mostly designed with a long taper and, even though silk lines had the ability to sink, they weren’t conducive to turning over large flies. The introduction of compact shooting heads and interchangeable sink tips gave anglers a major advantage—now they could actually present the fly to the fish.

These days the most popular shooting head is the Skagit style. Specifically developed for winter steelhead in Washington’s deep, fast Skagit River, the Skagit head’s condensed weight distribution transfers energy down the sink tip and leader, easily turning over a large profile fly. This short, easy-to-cast head was revolutionary for winter steelheaders.

It’s important to note that Skagit lines are designed to be cast with sink tips. New Skagit casters do themselves a disservice when fishing dry flies or subsurface patterns without an extended tip. While casting a Skagit line without a tip is still possible by lengthening the leader, it’s often more work than necessary. Fishing a longer line, such as a Scandi style, is usually the most practical solution in these cases.

As a side note, there are many anglers who choose to use their winter fishing setups while fishing for summer-run fish. Apart from being clunky and noisy in low-water conditions, they can also be counterproductive when trying to catch fish that are near the surface. Because the Skagit line is usually fished with a tip, I often see people fishing underneath the fish. There are exceptions, of course: Bright sun and heavy pressure can push salmon and steelhead deeper in the water column. But, typically, Skagit lines and sink tips are best suited to winter fisheries. 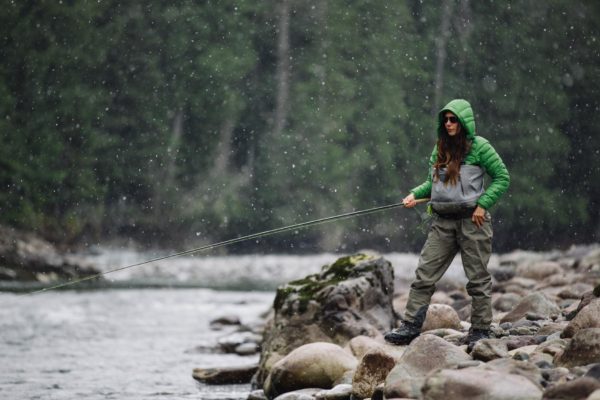 Casting Angles
It is always interesting to hear different steelhead guides’ viewpoints on whether to cast directly across the river, slightly upstream or on a downstream angle. The truth is that this subject is far too situational to really try and standardize. As a general rule, casting directly across from yourself means that the fly will swing through the current slower than if it were cast on a downstream angle. Remember, the key with winter steelhead is to leave the fly in the water for as long as possible to give the fish as much time as possible to take. There are a multitude of ways to get the fly to do this. From mending to stepping strategically, every presentation will vary depending on structure, current, depth, water clarity, pressure and more. When you rid yourself of the habit of mindlessly fishing the same way every time you’ll notice a difference in your catch rate.

Hatcheries
It’s important to note that coastal rivers often have hatcheries. A hatchery fish typically has its adipose fin removed as a juvenile. These fish are marked because they are put into the system for anglers to kill and eat. The uptick in catch and release practices may confuse new steelheaders, but it is actually more damaging to the environment if hatchery steelhead are released. So please roll up your sleeves, learn how to bleed a fish and keep your BBQ propane tank full. For a great hatchery steelhead recipe, just sub out the salmon for steelhead.  Enjoy!

I don’t remember my first fish, but there’s a good chance it was a white perch. I’m pondering that perch, and thinking about the species in general, as I tip my jig with a shiner chunk and drop it to the bottom. White perch aren’t actually perch; they’re a cousin to the much larger and more glamorous stripers, natives of the Northeast, like me, like my father, and his father. My father stands nearby, beside his long-time fishing buddy, Jeff. They...

Full disclosure, most of the season I make my living driving up and down the lake in an expensive, sparkly disco sled of a boat with the intention of catching the biggest walleyes around. But, truth be told, my favorite time of year is actually when I can leave the boat on the trailer and grab a pair of waders to look for big walleyes at night. Regardless of where you live, leaves starting to fall off trees signals some of the best fishing of the...