What Is Koji Aging and Does It Work?

If you keep up with the trends in culinary culture, there is a good chance you’ve come across some mention of koji-aged meat. The widespread claim is that in three days you can recreate the flavors of meat that has been dry-aged for 45 days.

I wanted to challenge that statement by testing it on wild game. I took some venison backstrap and rubbed it with koji for 72 hours to determine if this aging hack lives up to the hype.

In English, koji is used to describe any starchy grain that has been inoculated with Aspergillus oryzae. This specific strain of mold is safe for human consumption and is most commonly used to make sake, soy sauce and miso.

Koji can be made at home by introducing the spores to your grain of choice, or by purchasing pre-cultured rice that has been dried for longer shelf life. These microbes produce enzymes that break down starch and protein, resulting in aged meat flavors.

The theory is that instead of waiting for the meat’s natural enzymes to break down connective tissue, applying this mold will do the job much faster. 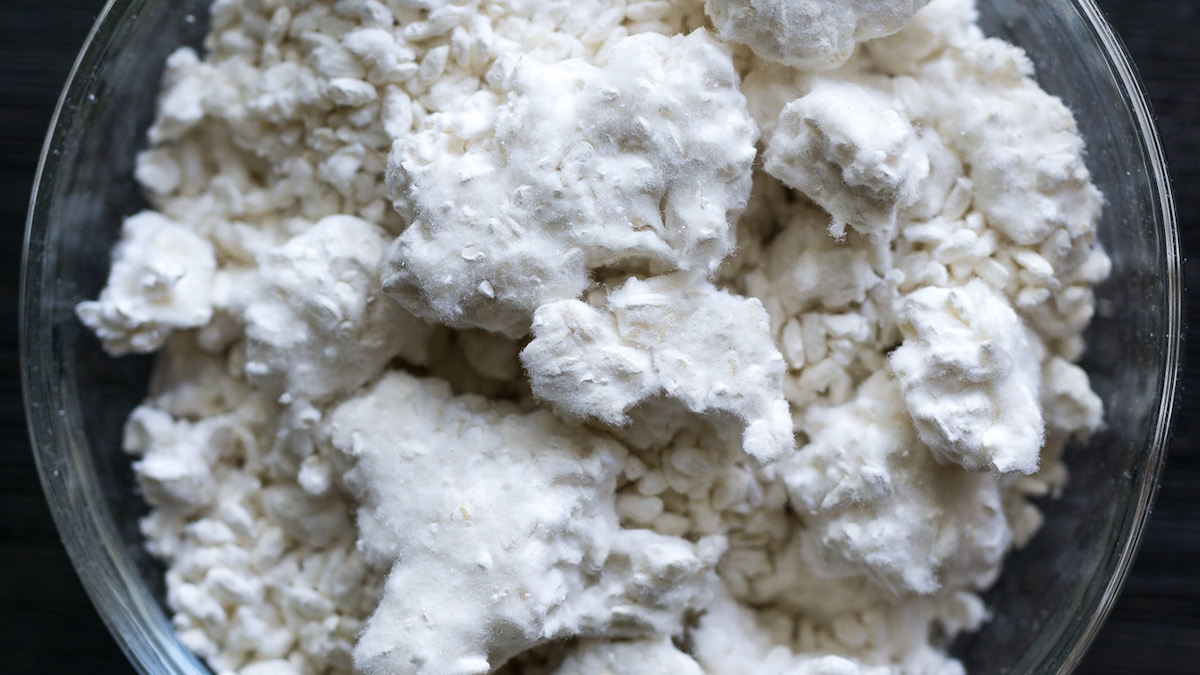 My experiment only required a few simple steps. I purchased dried koji rice and buzzed it in a blender to create koji flour. I rubbed a portion of backstrap generously with about 3 tablespoons of flour and placed it on a cooling rack for air circulation. I left it uncovered in the fridge for 72 hours.

By the time the three-day window was up, the white, powdered meat had turned fuzzy and dark gray. I used a knife to scrape off the mold, which had turned the outer layer to a gummy texture. The edges had dried into a hard crust that also had to be trimmed. After a good rinse under cold water, I could feel how the texture had changed. The raw meat was soft and springy before introducing it to koji. Now it felt firm, almost as if it was already cooked.

After patting dry the backstrap with paper towels, I seasoned it with only a touch of salt and pepper since I wanted to make sure I could distinguish any changes in taste.

I then seared it in a cast iron for about 3 minutes on each side to my preferred choice of doneness: rare. I had to reduce the heat to a lower temperature than normal to prevent the outside from burning. The enzymes in the koji flour convert the starchy rice into sugar, making a crust develop very quickly over heat.

Finally, after a short rest, I cut into the steak. 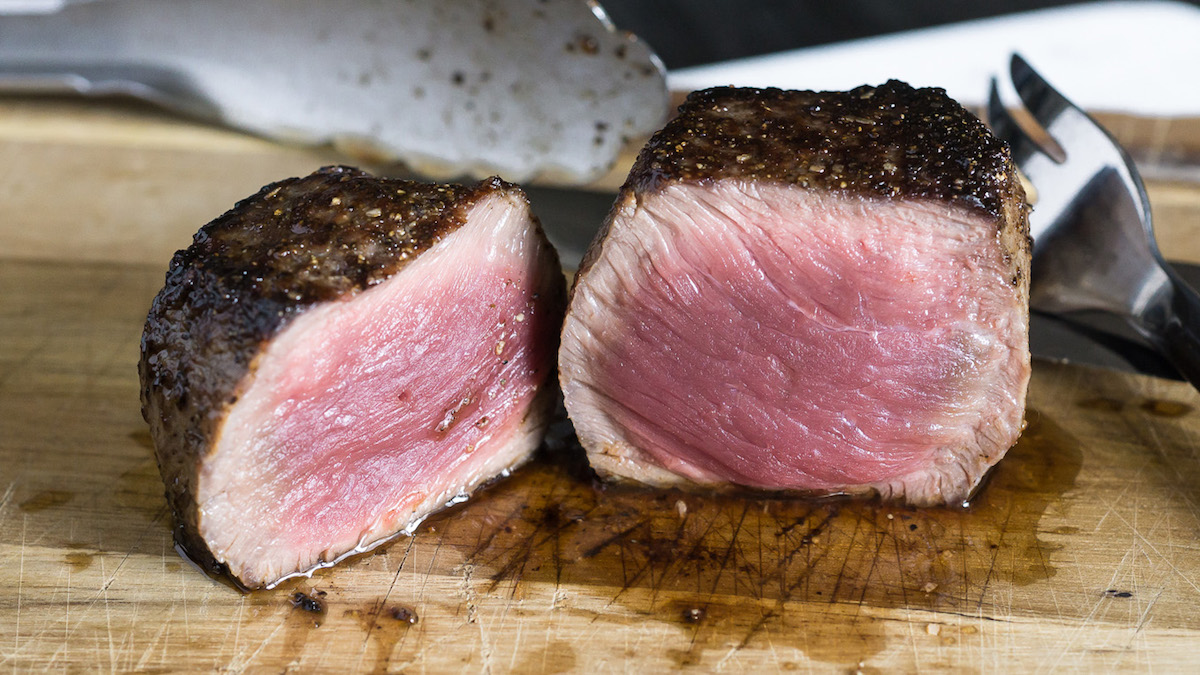 The texture was indeed a little different. The meat was denser than usual. However, this had no effect on the tenderness as it practically melted in my mouth. Because backstrap is pretty tender on its own, I won’t assume koji was solely responsible for that.

The flavor wasn’t quite what I was hoping for. I didn’t pick up any funky blue cheese notes common with aging, but it was much more intense. That doesn’t mean it was gamier, just more savory and meaty. This is because enzymes in the mold break down and turn protein into amino acids that impart umami flavor.

The outside of the meat caramelized into a crust, giving a slightly sugared exterior that nails the salty-sweet combination we all love.  I took my time eating this steak, savoring each bite.

As delicious as this backstrap was, I would never advertise that koji could duplicate a 45-day dry-age, nor encourage anyone to purchase it as a substitute for aging. The unique flavors developed in dry-aged meat are partially due to dehydration, something that this mold simply cannot replicate in three days.

However, I believe koji has a lot of value and I’ll likely use this method again. It’s a great way to enhance the natural flavors of meat and have fun experimenting in the kitchen.

Koji is incredibly versatile and has the potential to transform the taste and texture of a variety of ingredients, not just red meat. Be on the lookout later this week for an unbelievable new recipe using this magical mold on pheasant.

Shop All
Save this product
Benchmade
Essential Meatcrafter™️ Knife
$180.00
A hybrid hunting fixed blade with a fine, smooth edge to trim, debone, or slice your preferred cuts of meat. Makes just as much sense in the back of your truck as it does in the kitchen drawer.
Save this product
Meater
Meater+ Bluetooth Thermometer
$99.99
With up to 165 ft Wireless Range, MEATER is the first truly wireless smart meat thermometer.
Save this product
Spiceology
7 Pack Seasonings Gift Pack
$59.99
Bring home the entire Mega Spice Collection and change the way you cook.
Save this product
Penguin Random House
The MeatEater Fish and Game Cookbook
$35.00
The definitive guide to cooking wild game, including fish and fowl, featuring more than 100 new recipes.
Get the latest in your inbox
Subscribe to our newsletters to receive regular emails with hand-picked content, gear recommendations, and special deals.
Our picks for the week's best content and gear
For the whitetail obsessed, with Mark Kenyon
Redefining our connection to food, with Danielle Prewett
Your one-stop for everything waterfowl, with Sean Weaver
Get out on the water with the MeatEater Fishing crew
Technical hunting apparel
Purpose-built accessories for hunting and fishing
Quality elk, turkey, waterfowl, and deer calls
Privacy Policy

Is Hanging Meat Worth It?

Hunters have been hanging meat from all manner of game animals for a very long time. Under the right conditions, hanging meat does a lot to improve the texture and flavor of game. At MeatEater, we hang whole and quartered big game animals on regular basis, and we can vouch for the fact that it really does make a difference on the table. Nevertheless, we still get a lot of questions on why and how to do it. Before we get into the hows of hanging...

How to Determine the Age of Snow Geese

There are loads of misconceptions around cooking snow geese, which can make using them in the kitchen feel like a daunting and confusing task. Numerous variables play a role in defining their palatability, but one of the most helpful tips I can give for cooking geese is to make sure you determine the age first. This information will help you decide which cooking method is best for your bird. It’s a shame that snow geese get such a bad rap. I...