Here at MeatEater, we’re all about eating what we take from the woods and waters. This article is part of an “I Ate…” series where we’ll taste-test unusual flesh that most sportsmen might not have considered bringing to the dinner table.

The statement “I ate crow” isn’t one to take literally. It’s an admission of humility. A phrase uttered after a strongly held conviction gets disproven. The etymology of this phrase compares the experience of being wrong to consuming crow. Ostensibly, they’re both hard to swallow. 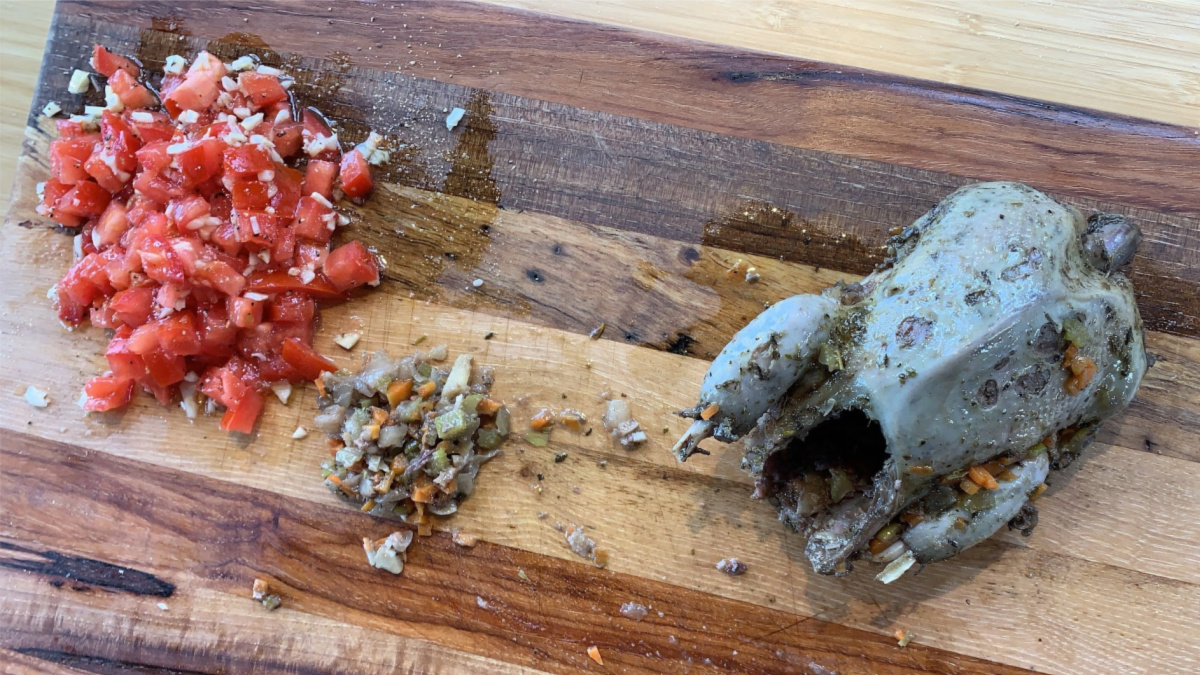 Origin Theories
The origin of the phrase is hard to track down because it’s been around for so long. One of the first references to crows’ foulness comes from the Bible chapter Leviticus: “Of the birds, these you shall loathe; they shall not be eaten.” Along with crows, the list includes vultures, hawks, falcons, owls and bats (which aren’t birds).

The saying became more Americanized in the 1850s when a humor piece gained popularity through publications like the Saturday Evening Post and Knickerbocker. In the fictional essay, a farmer tells his urban companions that you can eat anything on the farm. On a dare, the farmer eats a crow that has been spiked with Scotch snuff. Realizing the crow wasn’t as edible as he thought, the farmer says, “I kin eat a crow, but I be darned if I hanker after it.”

Wherever the phrase came from, linguists suspect it was ushered into the vernacular with similar idioms, like “eat dirt,” “eat humble pie,” and “eat one’s words.”

As for the actual act of eating crow, early reviews don’t offer much favorable commentary. In almost every example available, crow was only eaten out of desperation.

A letter published in the Leavenworth, Kansas, 1859 Weekly Times, a pioneer wrote that his group became despondent during a food shortage while traveling the Smoky Hill Trail from Kansas to Denver. “We lived on cactus and wild onions, occasionally killing a crow or other birds.”

Across the Pacific, a popular demonym for Southern Australian people is “croweater.” They gained this name because when early settlers would run short on mutton, they’d turn to undesirable birds for protein, like cockatoos, parrots and crows. 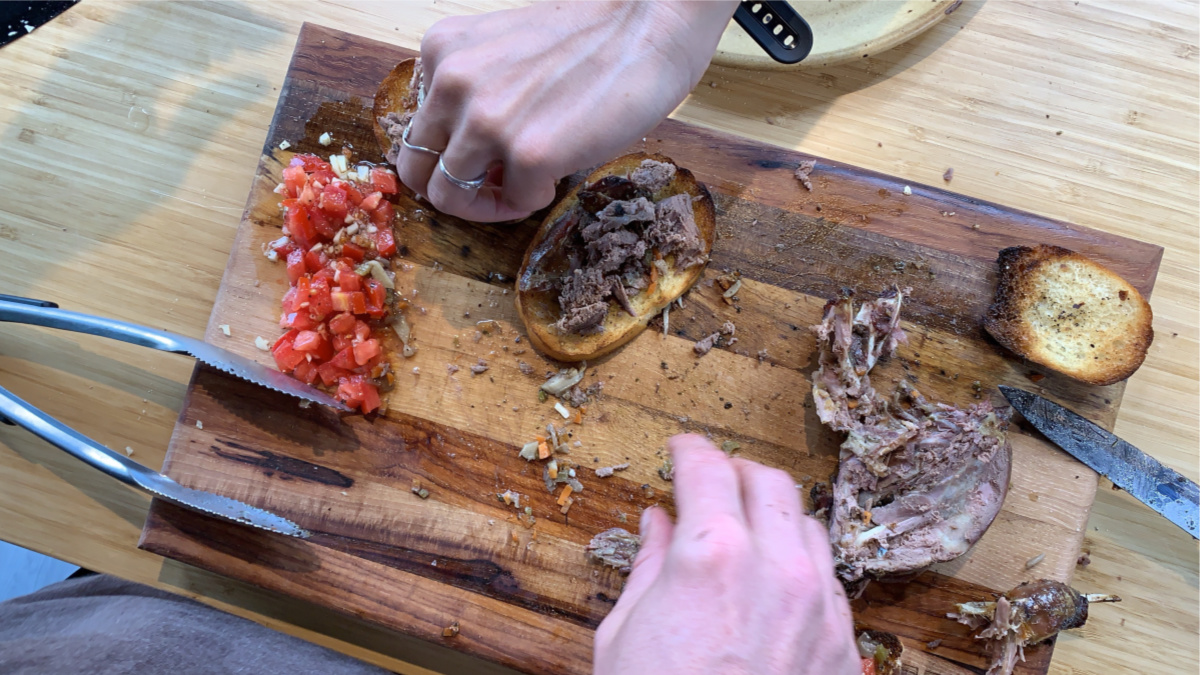 Crow Preparation
My ambition to eat a crow wasn’t born out of desperation; I’ve got a freezer full of delicious ungulates, upland birds and waterfowl. Rather, I wanted to see if the hype is true, or if outdoorsmen are overlooking a bird that is sporting to hunt, widely distributed and generally unbounded by strict seasons or bag limits.

I shot my crow in South Dakota where there is a spring and fall season that each last two months. Crows can be hunted with any resident or nonresident hunting license and have an unlimited daily limit and possession limit.

I plucked the entire crow and left the skin on. Naked of feathers, it looked like a Thanksgiving turkey shrunk by the power of 20. Think of the size of a teal or pigeon.

Ryan Callaghan was equally excited to try crow, and even offered to cook it. For preparation, he rubbed the bird in oil, covered it in spices and stuffed it with a mirepoix of carrots, onions, celery and garlic. It then went into a sous vide bath for five hours at 158 degrees.

After emerging from the plastic bag, the bird was tender but gray. The color wasn’t very appetizing, but that’s more a product of sous vide than it is by nature of being a crow. To finish the bird and add some color and crispiness, Cal ran it over a hot grill for a few minutes on each side. 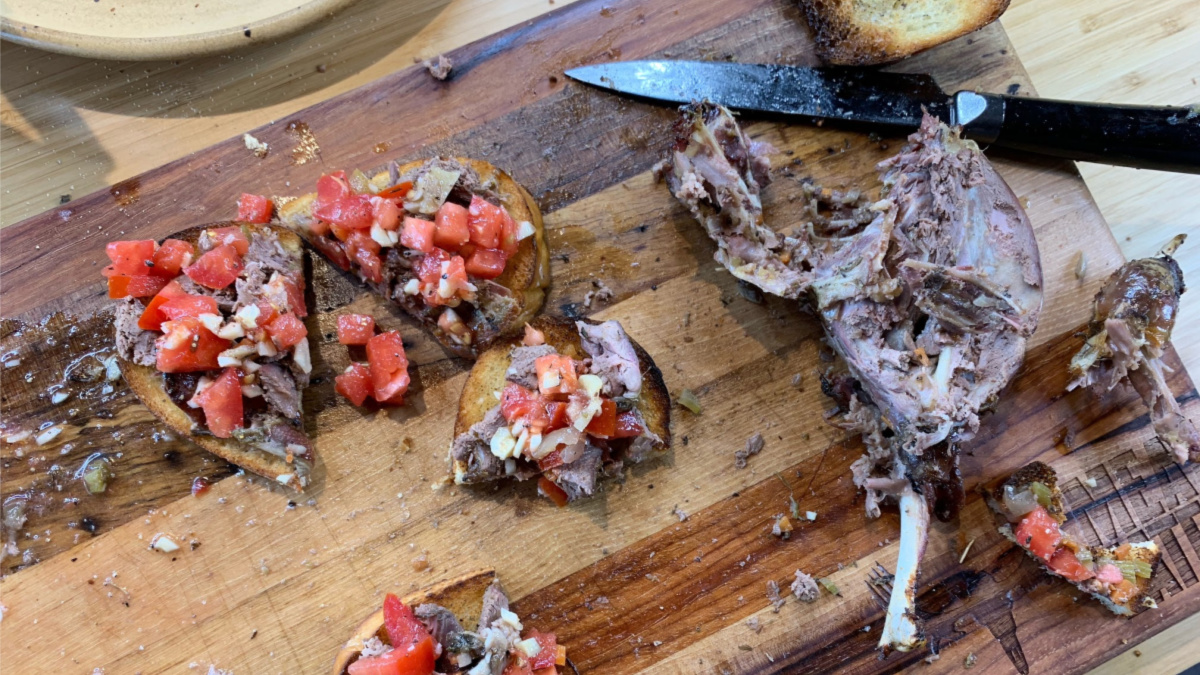 Crow Review
While Cal carved the bird, a small crowd of MeatEater employees began to circle. No one here had ever had crow before, but that was about to change.

Cal and I took the first bites on top of toasted French bread along with diced tomatoes, balsamic vinegar and olive oil—crowschetta, if you will.

However, anything served that way would taste good. To get a more honest assessment of the meat’s edibility, Cal and I each took pieces of the drumstick. It had good flavor but was a little tough. I’d say it was comparable to any dark leg meat off of an upland bird.

Soon after, reviews from fellow MeatEaters started rolling in. Sam Lungren remarked that it was similar to pigeon and had a slightly chalky texture. Ben O’Brien said that it tasted as good as it looked. Janis Putelis gave the classic line that it tasted like chicken. About 10 others tried it as well, and no one got sick or had a bad thing to say.

Cal summed up the taste test by noting that crow are officially on his radar as a gamebird: “If I’m in a spot where it’s legal, and I haven’t seen these guys poking around a nearby parking lot picking up French fries, I’ll be all over them.”

I think everyone came away with a similar sentiment. Although generations of hunters have dismissed crow as table fare, the majority of them have never tried it. For all those who’ve said you can’t eat crow—well, they should figuratively and literally eat crow.

For a video of us cooking, eating and reviewing crow, check out our Instagram TV channel.

Shop All
Save this product
Benchmade
Essential Meatcrafter™️ Knife
$180.00
A hybrid hunting fixed blade with a fine, smooth edge to trim, debone, or slice your preferred cuts of meat. Makes just as much sense in the back of your truck as it does in the kitchen drawer.
Shop Now
Save this product
Meater
Meater+ Bluetooth Thermometer
$99.99
With up to 165 ft Wireless Range, MEATER is the first truly wireless smart meat thermometer.
Shop Now
Save this product
Spiceology
7 Pack Seasonings Gift Pack
$59.99
Bring home the entire Mega Spice Collection and change the way you cook.
Shop Now
Save this product
Penguin Random House
The MeatEater Fish and Game Cookbook
$35.00
The definitive guide to cooking wild game, including fish and fowl, featuring more than 100 new recipes.
Shop Now
Get the latest in your inbox
Subscribe to our newsletters to receive regular emails with hand-picked content, gear recommendations, and special deals.
Our picks for the week's best content and gear
For the whitetail obsessed, with Mark Kenyon
Redefining our connection to food, with Danielle Prewett
Your one-stop for everything waterfowl, with Sean Weaver
Get out on the water with the MeatEater Fishing crew
Technical hunting apparel
Purpose-built accessories for hunting and fishing
Quality elk, turkey, waterfowl, and deer calls
Privacy Policy

Can You Eat Raccoon? Absolutely

The first time I ate a raccoon was about 11 years ago. Some were raiding the chicken coop where we lived, so my roommate and I were charged with dispatching. We trapped one in a Hav-a-Hart, killed it, and being equal parts curious and broke, we cooked it. We braised the first raccoon with a bunch of chili peppers, aromatics, and stock. I was honestly conflicted about the whole ordeal. On the one hand, it smelled damn good as it was cooking. On...

Video: How to Cook Beaver Tail

Beaver tail was a delicacy amongst mountain men as it's a great source of fat, which can be hard to find in the wild. I simply grill the tail over high heat, crack it open, and use the fatty goodness that's inside the tail the same way chefs use bone marrow. It makes for a very delicious appetizer.