How to Clean a Gizzard

The gizzards of game birds like pheasants, ducks, and turkey are under-appreciated little nuggets of meat. Perhaps it’s because they look strange and are difficult to trim without proper instruction. Well, we’re taking the mystery out of preparing them by showing you how to clean a gizzard and how to cook a gizzard.

The gizzard is a muscular stomach that holds the grit and stones which allow birds to grind and digest food. It’s oval shaped with two chunks of meat on either end with a yellow sack of grit in between. To prepare the gizzards for cooking, you’ll need to trim off the chunks of meat. Below are two ways of going about it. 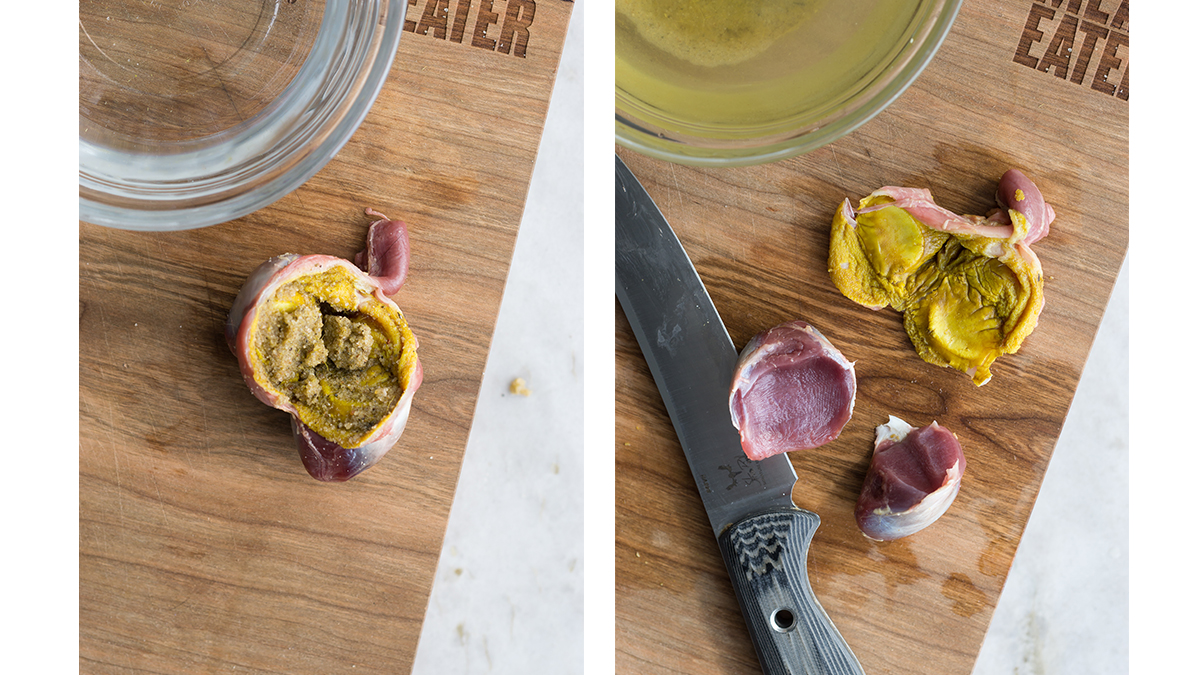 How to Clean a Gizzard: Option 1
The most common way to clean a gizzard is to make a shallow cut right down the middle to expose the yellow sack and its contents. Try and cut just the outer membrane without digging your knife blade deeply; no sense in dulling your knife on rocks.

Next, dip the open gizzard into a bowl of water to clean it out or use a hose outside. You don’t want this stuff going down your kitchen sink drain. 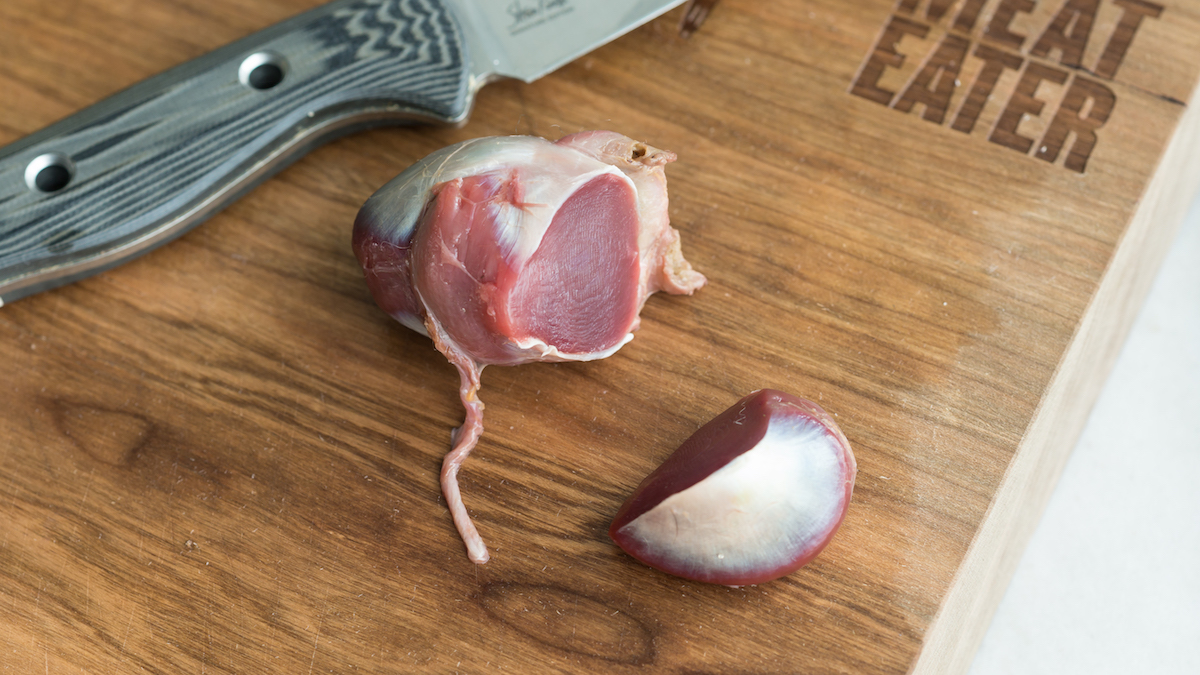 How to Clean a Gizzard: Option 2
The second method is to avoid opening up the yellow sack of grit and simply slice the meat off the sides.. This is a much easier and cleaner option, although if you’ve never trimmed a gizzard before I recommend doing it the first way at least once to familiarize yourself with the anatomy. The only downside is that you won’t know exactly where to cut and you might waste a little meat. 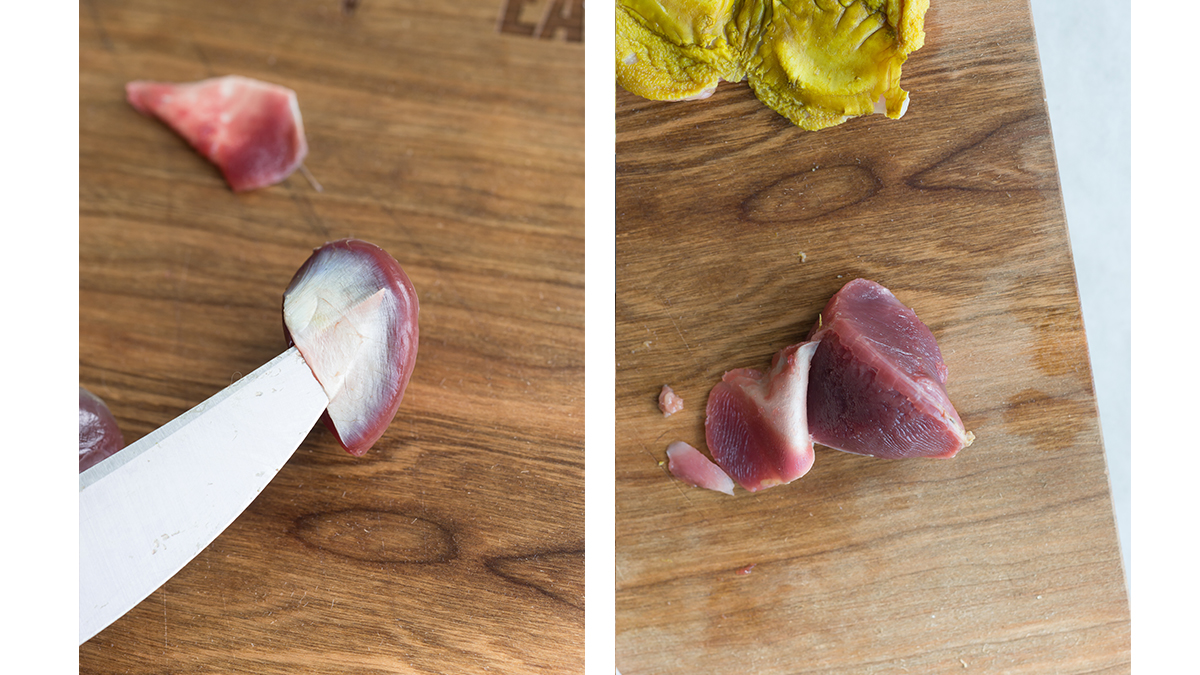 Trim Silverskin
After the meat has been cut away from the rest of the gizzard, you can trim off the silverskin. This step is optional, depending on the bird. The silverskin can be thick and tough on bigger fowl like geese and turkeys. You can leave it on smaller gizzards; it will tenderize when cooked for a long time.

To remove, slide the tip of a sharp knife between the meat and silverskin to get it started. Then you can peel the rest away with your fingers. You’ll be left with two clean pieces of meat that are ready to cook.

How to Cook Gizzards
We like to collect a bunch of gizzards and cook them all at once for a special treat. They freeze well whole, and you don’t even need to clean them until you’re ready to cook.

Once they’re trimmed, you’ll notice that the gizzards of wild game birds are very dense and dark colored. They can be sliced thinly and flash-seared or fried, although I don’t think it’s the best way to prepare them. Gizzards are excellent table fare when cooked slowly and gently to soften the texture.

One of MeatEater’s favorite preparations is Steve’s pickled gizzard recipe that requires simmering until tender and then covering with a vinegar brine. I’m partial to doing a confit the same way you would goose legs and then serving them inside tacos. Another tried-and true-method is to add gizzards to giblet gravy for your next Thanksgiving feast.

Whichever route you choose, try saving the gizzards of your game birds. You’ll be surprised by how flavorful and delicious these odd bits can be.

How to Butcher a Turkey

Preparation for a turkey is key, if the bird is prepped correctly the options are endless, when it comes to recipes. Once a turkey has been plucked, the turkey can be used for any whole preparations such as stuffed and roasted Thanksgiving-style turkey. What I generally like to do,  is split the bird in half so that I’ve got two manageable-sized pieces. This lets me enjoy the turkey in parts, rather than all at once, and it takes up a lot less...

Video: How to Remove a Venison Hindquarter

The hindquarters of a deer, also known as hams, contain a large proportion of the total meat and some of the choicest cuts. It’s here where you’ll find the sirloin, round roasts, eye of round, and others. The more attention you can pay to your technique as you’re removing the back legs, the more meat will wind up in pretty little white packages in your freezer. In this video, I’m showing how you’d remove the hindquarter from a deer that was taken...