On Monday, June 13, the Yellowstone River burst at the seams with historic flows of raging, chocolatey-brown runoff water. The roaring current wiped out Tom Miner Bridge outside of Gardiner before noon. Flood waters are eating away at paved roads, mud and rockslides are blocking means of travel, and some roadways are covered in up to 3 feet of water.

All entrances to the park are closed, and certain areas have lost power. Authorities are currently working to evacuate stranded residents and visitors.

The Yellowstone’s most recent daily discharge was measured at Corwin Springs, just north of Gardiner, clocking in at 48,000 cubic feet per second (cfs) according to data collected by the USGS. For comparison, the mean flows for this area stabilize around 12,000 cfs. The closest any recording has come to this level in over 100 years was in 1918 at 30,000 cfs. That makes this about a once-in-a-century flooding event. 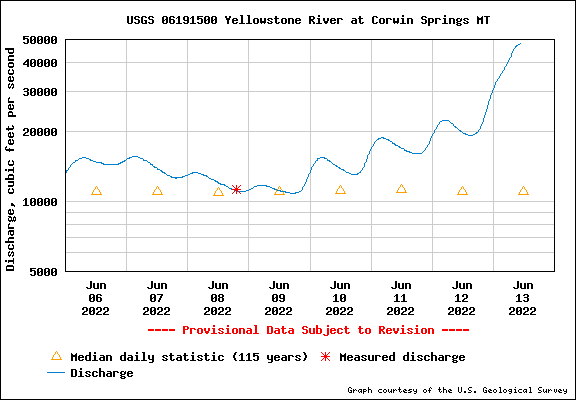 Because rivers are roaring so out of control at the moment, some gauges may be either out of commission or reading incorrectly. Click here to see updated readings of the Yellowstone flows around Corwin Springs and here to check out the readings near Livingston.

Smaller rivers like the Gardner River and Lamar River that run through the park are also off the charts with flow rates and are damaging infrastructure. You can monitor their respective rates here and here.

“Due to record flooding events in the park and more precipitation in the forecast, we have made the decision to close Yellowstone to all inbound visitation," said superintendent Cam Sholly in a press release. "Our first priority has been to evacuate the northern section of the park where we have multiple road and bridge failures, mudslides, and other issues. The community of Gardiner is currently isolated, and we are working with the county and State of Montana to provide necessary support to residents, who are currently without water and power in some areas.”

The most severe damage is currently affecting the northern areas in and around the park, including the Lamar Valley, Gardiner, and Red Lodge. Because levels of rainfall and runoff are not slowing down, park officials and emergency responders are working to evacuate the entirety of America’s first national park.

“Due to predictions of higher flood levels in areas of the park’s southern loop, in addition to concerns with water and wastewater systems, we will begin to move visitors in the southern loop out of the park later today in coordination with our in-park business partners,” Sholly said. “We will not know timing of the park’s reopening until flood waters subside and we're able to assess the damage throughout the park.”

Major flooding events are a rare occurrence in this part of the country. Normally plagued by drought, anglers, hunters, and agricultural workers alike have praised this incredibly wet spring currently gracing the arid landscape. Snowpack is around 200% of mean levels in many areas. Is there such a thing as too much of a good thing? Perhaps when it starts washing out roads and bridges, but I’d wager the fish don’t mind too much. The watershed may be saturated right now, but it won’t last forever.

Currently, ensuring the safety of those isolated is of the utmost importance. Roads can be cleared and rebuilt, and trips can be rescheduled.

“It is likely that the northern loop will be closed for a substantial amount of time,” Sholly concluded. “I appreciate the efforts of the Yellowstone team and partners to safely evacuate areas of the park and of our gateway community partners who are helping us through this major event. We appreciate the support offered by the Department of Interior, National Park Service, and the Montana and Wyoming governors."

There’s a difference between book smart and bar smart. You may not be book smart, but this series can make you seem educated and interesting from a barstool. So, belly up, mix yourself a glass of LMNT Recharge, and take notes as we look at how you could literally get away with murder in Yellowstone. Powered by LMNT. Yellowstone National Park was established in 1872, about two decades before Wyoming, Montana, or Idaho gained statehood. Thanks to...

Regular readers are likely quite accustomed to headlines about people doing really stupid stuff around wild animals in Yellowstone National Park. In just the last two months, a woman was bluff charged by a sow grizzly after getting too close to its cubs, another man was smacked around by a bear while hiking alone, and another woman was gored by a bison. But sometimes it’s people behaving like wild animals that garners news coverage—and hefty...