Shortly after graduating high school, my buddy Ed got run over by a truck while riding a bicycle. We’d been planning a mountain goat hunt up the Taku River near where Ed’s family had a cabin. I figured the hunt was off. The accident was the sort that would have killed most people, but Ed walked it off with several snapped ribs, a collapsed lung, several broken teeth, and a lifelong skepticism of anything to do with bicycles.

Growing up, Ed had spent a lot of time staring up at the white specks of goats high in the mountains. We’d talked about making a hunt for a while, and Ed wasn’t going to let his injuries get in his way. So, a few months later, when goat season opened, we headed up the river. It was my first time up the Taku and I was impressed by the glaciers, tributaries, and rugged mountains. Despite not being entirely healed, Ed had no problem bushwhacking up the mountain. We crawled within 70 yards of a small herd. Most were nannies and kids, but there was one adult billy in the mix. After Ed shot, we butchered him in the soft evening glow. 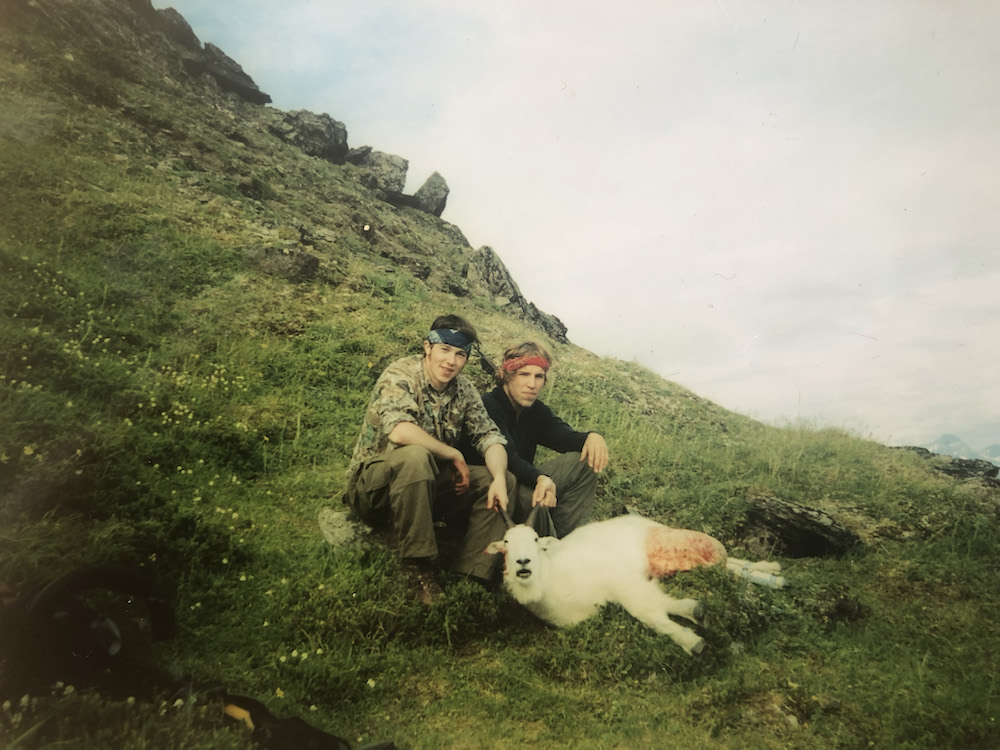 The Taku, along with the Stikine and Unuk Rivers, are enormous “transboundary” watersheds shared by Southeast Alaska and British Columbia, Canada. All five species of Pacific salmon spawn in these water systems, as do eulachon, steelhead, Dolly Varden, cutthroat, and numerous other kinds of fishes. Historically, 80% of king salmon returning to Southeast Alaska are from these watersheds. The salmon fishery supports more than 7,000 jobs and contributes $1 billion to the economy of Southeast Alaska. Salmon are the backbone of the region’s lifestyle and ecosystem.

The British Columbia side of the Taku, Stikine, and Unuk watersheds is known as “The Golden Triangle” by mining interests. The recent construction of the Northwest Transmission Line in northwest British Columbia has spurred an industrial gold rush. Salmon Beyond Borders, an Alaska-based organization that works on the issue, is currently tracking more than a dozen in these sensitive watersheds. Many of them are classified as “mega mines.” Despite being faced with the majority of the economic and environmental risks of these mines, Southeast Alaskans have no say in how these mines are developed, monitored, and maintained after they’re closed down.

At the time of the goat hunt, I’d heard of the Tulsequah Chief Mine. It’s not that far upriver from Ed’s cabin. I knew it had been leaching acid drainage into the Taku watershed since it closed down in 1957, but I didn’t think much of it at the time. How bad could one mine’s runoff be in such a big wilderness? Besides, B.C. kept talking like they’d clean the mess up. Then I began hearing about all the other mines—abandoned, operating, and proposed—and realized how tiny a footprint the Tulsequah Chief has in comparison. Many of these mines in the transboundary region are massive. Kerr-Sulphurets-Mitchell (KSM), if it goes through, would straddle both the Unuk and the Nass watersheds and be the largest open pit gold mine ever built in North America.

I’ve witnessed all five species of wild salmon runs dwindle in Southeast Alaska during the past 15 years. King salmon are in the worst shape. They’ve been declared a stock of concern on the Unuk since 2017 and on the Taku, Stikine, and four other Southeast Alaska rivers since 2021. In October 2019, tribal representatives from Southeast Alaska, B.C., and Washington declared “a state of emergency regarding polluted waters and declining salmon stocks.” There are other factors than mining to blame, including climate change, but B.C.’s mega mining stampede has communities and tribes across the region united in concern.

“This is of paramount concern for us, the whole issue of transboundary mines,” Chalyee Éesh Richard Peterson, the President of Central Council of Tlingit and Haida Indians of Alaska, said at a multi-state, multi-nation webinar a while back. “As Indigenous people of these lands…we belong to these rivers as much as they belong to us. These river systems and these watersheds supply the predominant amount of our salmon needs. We go up these rivers to hunt moose. We utilize these rivers to go and gather medicine, to get cedar bark, to live our traditional way of life. (A mine waste dam failure) would be completely devastating to us.”

Roughly 6,000 square miles of the Taku, Stikine, and Unuk watersheds are covered in B.C. mines or claims, and B.C. has a poor track record when it comes to mining regulations, with downstream contamination from operating or abandoned Canadian mines into Alaska, Montana, Idaho, and Washington waterways. There’s also no law in B.C. requiring mines to ensure they have money to clean up and treat their toxic waste before they begin operating, and experts estimate there’s a mining cleanup shortfall of $1.27 billion in Canadian dollars in B.C. After they close, these mines will leave behind massive amounts of toxic tailings that will act as repositories of poison in international watersheds. Water from mine sites will need to be treated anywhere from 200 years to forever. And if the mines go bankrupt, Alaskans and downstream British Columbians could be left with abandoned mines polluting on a much larger scale. 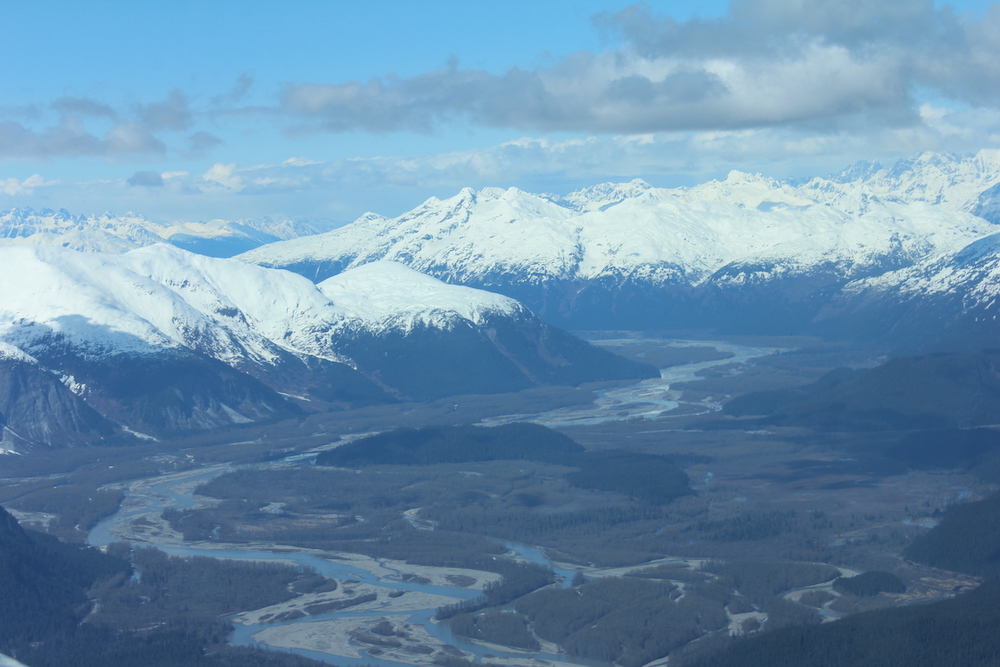 In 2014, I floated the Stikine River with a friend who works in the mining industry. Production was about to begin on the giant open pit Red Chris Mine located near the Stikine’s headwaters. We talked about risk versus rewards on these different mines. Neither of us came to any profound conclusions, other than that we both loved the Stikine. A few months after our float, in B.C.’s Fraser River watershed, the Mount Polley Mine’s tailing dam burst, unleashing a devastating tidal wave of pollution into the watershed. Afterwards, the B.C. government permitted the mine to discharge wastewater directly into the lake—something they’re now trying to extend. The Red Chris Mine is owned by Imperial Metals, the same company that owns Mount Polley, and utilizes the exact same tailings dam design. Experts predict that B.C. will have an average of two tailing dams fail every decade.

Twenty years have passed since that goat hunt. One of the last times I was up the Taku, I visited the Tulsequah Chief Mine. There had been lots of talk of cleaning up the toxic site. When my traveling partner and I got to the mine, we climbed a hillside comprised of the orange acidic goo of tailings. A steady stream of acid mine drainage flowed into the Tulsequah River. My friend had visited the mine seven years before and, despite decades of people demanding the site be cleaned up, nothing, not even hard hats or abandoned tools, had been moved since. The following day we floated down the Tulsequah in packrafts and made it to Ed’s cabin. He wasn’t there, but a couple of friends were hanging the quarters of a moose on the meat rack. We “borrowed” a half rack of Rainier Ed had left out and got back in our boats. I studied the mountain, hoping to see the white speck of a goat or two, but most of it was covered in fresh snow.

With the Tulsequah Chief still polluting, new mines and claims are popping up left and right on the B.C. side of the transboundary watersheds, sometimes right to the border. Southeast Alaska Tribes, municipalities, and organizations are passing resolutions urging President Joe Biden to get involved. The goal is a pause on new mining activity in B.C. until an international agreement that brings Tribes and people on both sides of the border to the table—through the International Joint Commission (IJC)—is in place. The IJC was established by Canada and the United States under the Boundary Waters Treaty of 1909, which explicitly states that “waters flowing across the boundary shall not be polluted on either side to the injury of health or property on the other side.” The resolution is also asking for a ban on B.C.’s mine waste dams in transboundary watersheds. 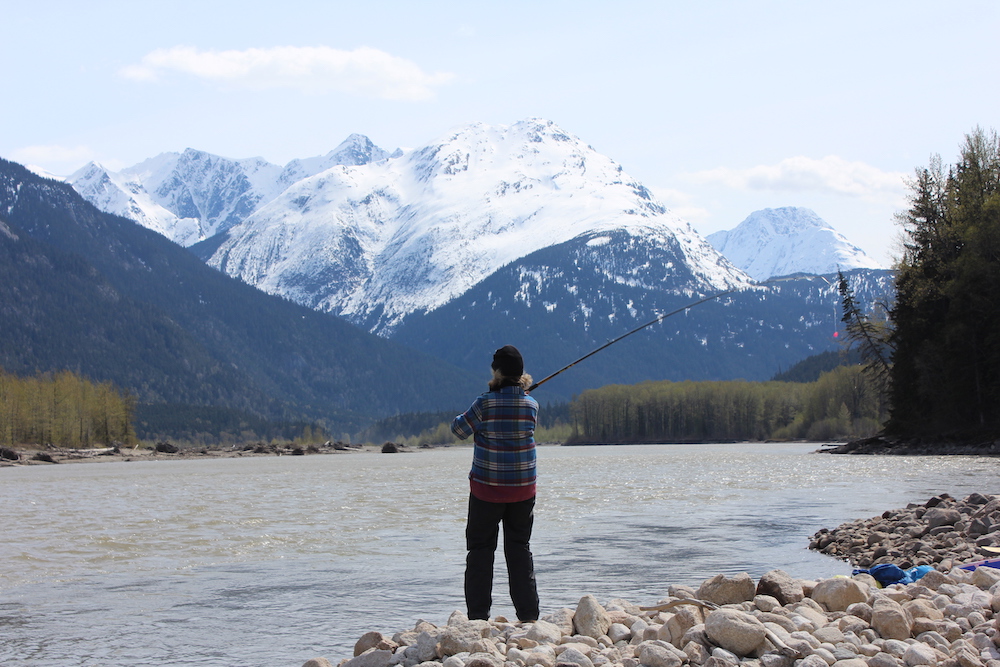 Ed and I both have young sons now. Sometimes we like to bullshit about fishing, hunting, and other wilderness adventures our young sons will hopefully share. What’s currently going on in B.C. threatens their future, though. Neither of us are against mining—we both recognize the industry as important for the economy and fulfilling societal wants and needs. But no country’s industrial activities should be allowed to poison a neighboring country’s rivers.

I keep thinking back to the Tulsequah Chief and how long it took my Xtratuf boots to no longer be stained orange from walking through the drainage streaming into the river. The Tulsequah Chief is tiny in comparison to a lot of these transboundary mines. In five days of its 52-year predicted span, for instance, KSM would move more ore than the Tulsequah Chief did over its entire life. What happens with the toxic waste that the Red Chris, KSM, and other mines leave behind? What happens when something goes wrong 20, or 100, years after a mine has closed and there’s no money left? The Tulsequah Chief’s 65-year legacy of being allowed to poison the Taku River answers that question—unless something changes very soon.

You can take action by signing Salmon Beyond Borders’ letter to President Biden, which urges him to demand a time-out in new mine development in transboundary B.C./Alaska watersheds, and a ban on B.C.’s mine waste dams in transboundary watersheds, until those impacted downstream have a meaningful say in the rivers’ future. Salmon Beyond Borders and Indigenous leaders will be bringing him this letter, and resolutions from Tribes and communities urging the same actions, later this year.

Forest Service Wants Your Input on Mine Adjacent to Boundary Waters

Some casts just feel too picture-perfect to produce—an expectation likely borne of experience with fishing busy waters where everyone hits the obvious, great-looking spots. It was with that skepticism that I landed my big silver spoon in the wash of a tall waterfall clattering down a sheer granite mountain face into the long, narrow, backcountry lake. Apparently, however, when you’re six portages back into the largest American wilderness east of...

The EPA Wants Your Input on Permanently Protecting Bristol Bay

On May 25, the Environmental Protection Agency released a plan that would effectively prohibit the development of the controversial Pebble Mine in Alaska’s Bristol Bay region. The proposed determination, under force of the 1972 Clean Water Act, would bar the Canadian mining conglomerate seeking to build the mine from using certain waterways for disposal of dredged materials associated with their planned extraction of gold, copper, molybdenum, and...

The Environmental Protection Agency (EPA) issued a final rule this week preemptively blocking the controversial Pebble Mine in Alaska’s Bristol Bay. The agency has only used this veto authority 13 other times since 1980, and conservationists are hopeful the ruling will be durable enough to withstand inevitable lawsuits and future presidential administrations. For now, the coalition of hunters, anglers, commercial fishermen, tribal members, and...