Brandon Butler drove three and a half hours on Jan. 4 to see what remained of his hunting cabin. He then watched the still-flickering flames for five minutes before leaving the fire to its task and retracing his drive home.

He had seen enough. He knew a short, memorable chapter in his life was over. Every tangible part of those memories was now ash.

Butler, 41, lives in Columbia, Missouri. He cherished his cabin and 43 acres in the Ozarks of southern Missouri. But no matter where hunters and anglers own old cabins or remote shacks, they feel Butler’s devastation. As one cabin-owning friend said when sharing the news, “This is my worst nightmare.”

No, the flames didn’t devour Butler’s home or worse, a loved one. But don’t underestimate the emotional toll of losing a place where people forged friendships, gathered clans, and honored the tools and souvenirs of their ancestry. 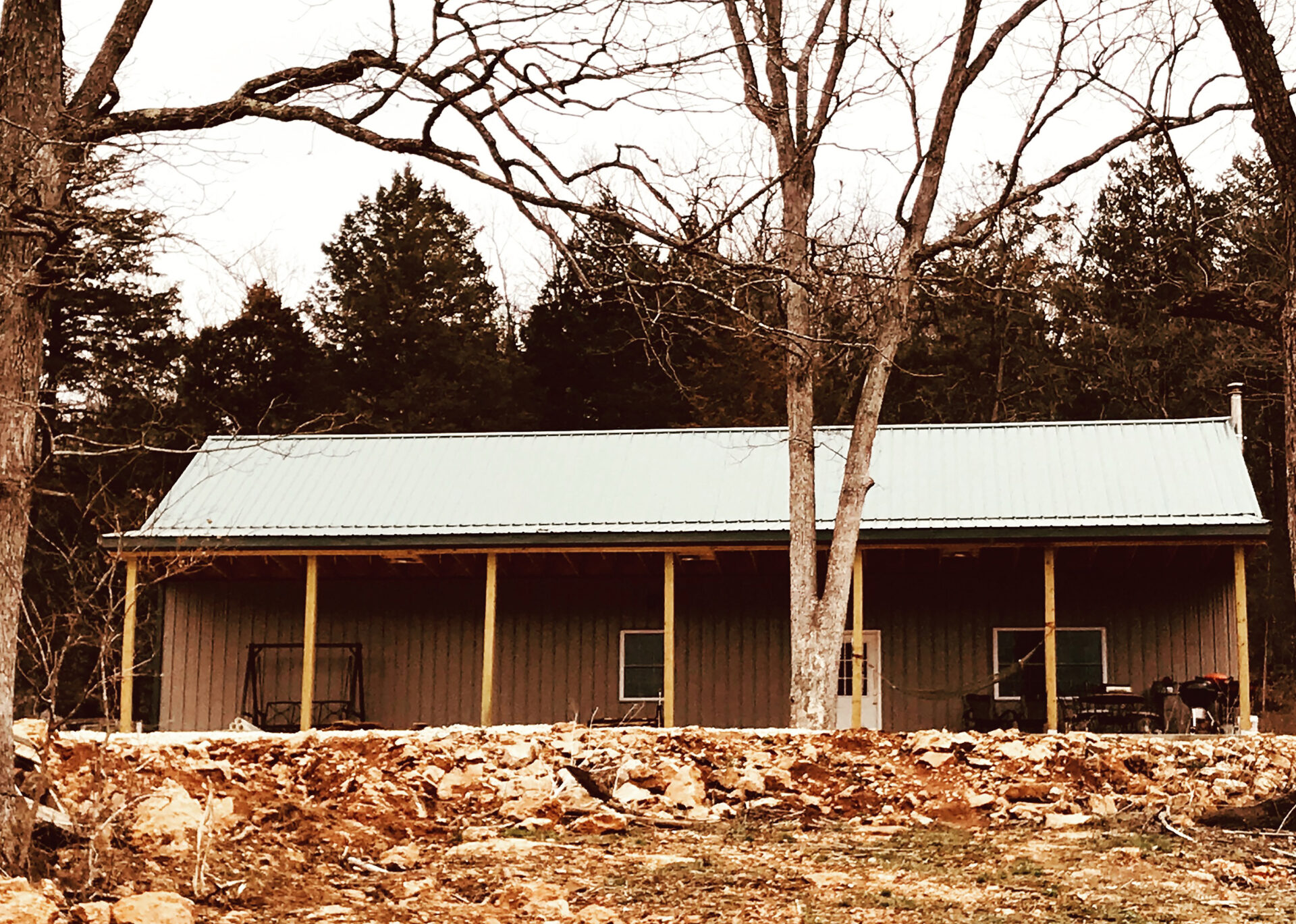 Those who hunt from another man’s cabin feel a bond usually absent in his house. When thinking of my friend Tom Heberlein, for instance, I picture “Old T”—his hunting shack in northwestern Wisconsin. I lack that connection to his condo in Madison or his former home in Lodi.

You don’t even have to hunt from a man’s shack to grasp such connections. Thousands brag of visiting the Wisconsin River shack where Aldo Leopold once hunted, but few think about the university office where he wrote about it. Likewise, far more thousands yearn to see Walden’s stone hearth than they do the attic where Thoreau wrote about it.

Such bonds form fast and strong. Butler, for example, grew up in northwestern Indiana and settled in Missouri about a decade ago. The former executive director of the Conservation Federation of Missouri bought his dream-getaway property 215 miles to the southeast in 2016. He had fallen in love with nearby Echo Bluff State Park and the scenic Sinking Creek, a crystal-clear tributary of the Current River.

Butler spent much of the next five years building his cabin with help from his father, Bill; uncle, Tom; and friends like “Paddle” Don Cransfill, Nathan “Shags” McLeod, and Pete Medved, Bill’s Army buddy. After hiring a carpenter to frame the place in 2017, Butler and his crew took over, often “repurposing” lumber salvaged from the property’s abandoned farm buildings. 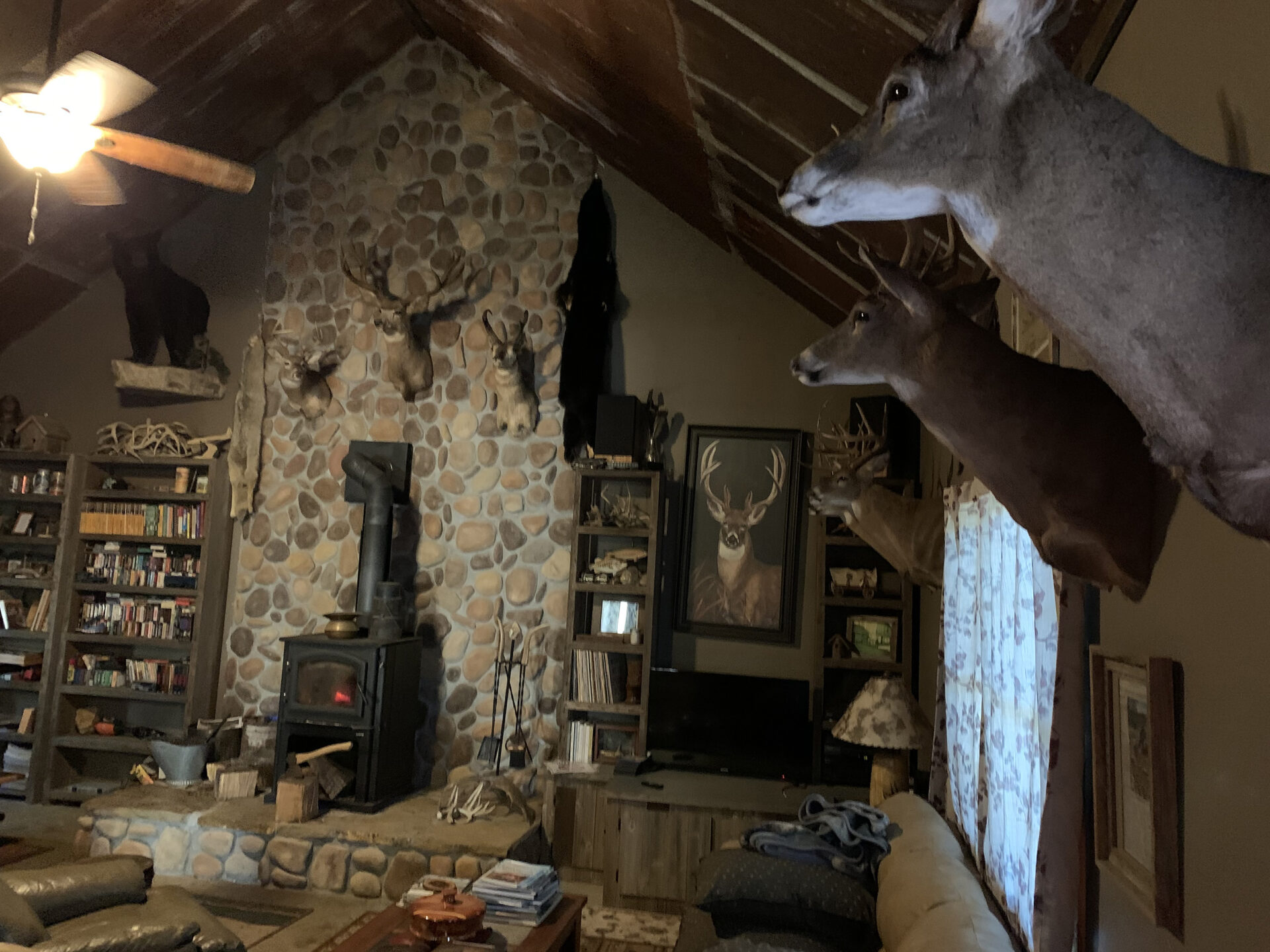 Meanwhile, Butler and McLeod began cohosting the Driftwood Outdoors Podcast, led rafting trips down the Current River, and hunted deer and turkeys on the property and nearby public lands. Butler killed the biggest buck of his life in those woods, and played host/guide for spring turkey hunts and July Fourth celebrations.

As they finished parts of the cabin, Butler admired his family’s tokens and expert craftsmanship wherever he turned. He decorated the place with framed samples of his children’s artwork, shoulder mounts of prized bucks, and family heirlooms such as his grandfather’s Folds of Honor flag from World War II. He also stocked bare spaces with countless antlers and cached prized collections of old hunting videos and DVDs by Will Primos, Bill Jordan, and Gene and Barry Wensel.

After finishing the cabin’s construction last summer, Butler signified the milestone by stacking rocks atop the property’s fenceposts. He and his crew gathered there often in the weeks that followed, including for Missouri’s gun-deer season in November.

As he and his friends relaxed on the porch one night, they saw a truck pull into a nearby field and turn the night into day with a light bar. When shots erupted from the truck, Butler jumped into his side-by-side to confront the violators. The truck sped off as Butler approached, but he got its license plate number. He filed a complaint on the shootings with the Missouri Department of Conservation, which is investigating. 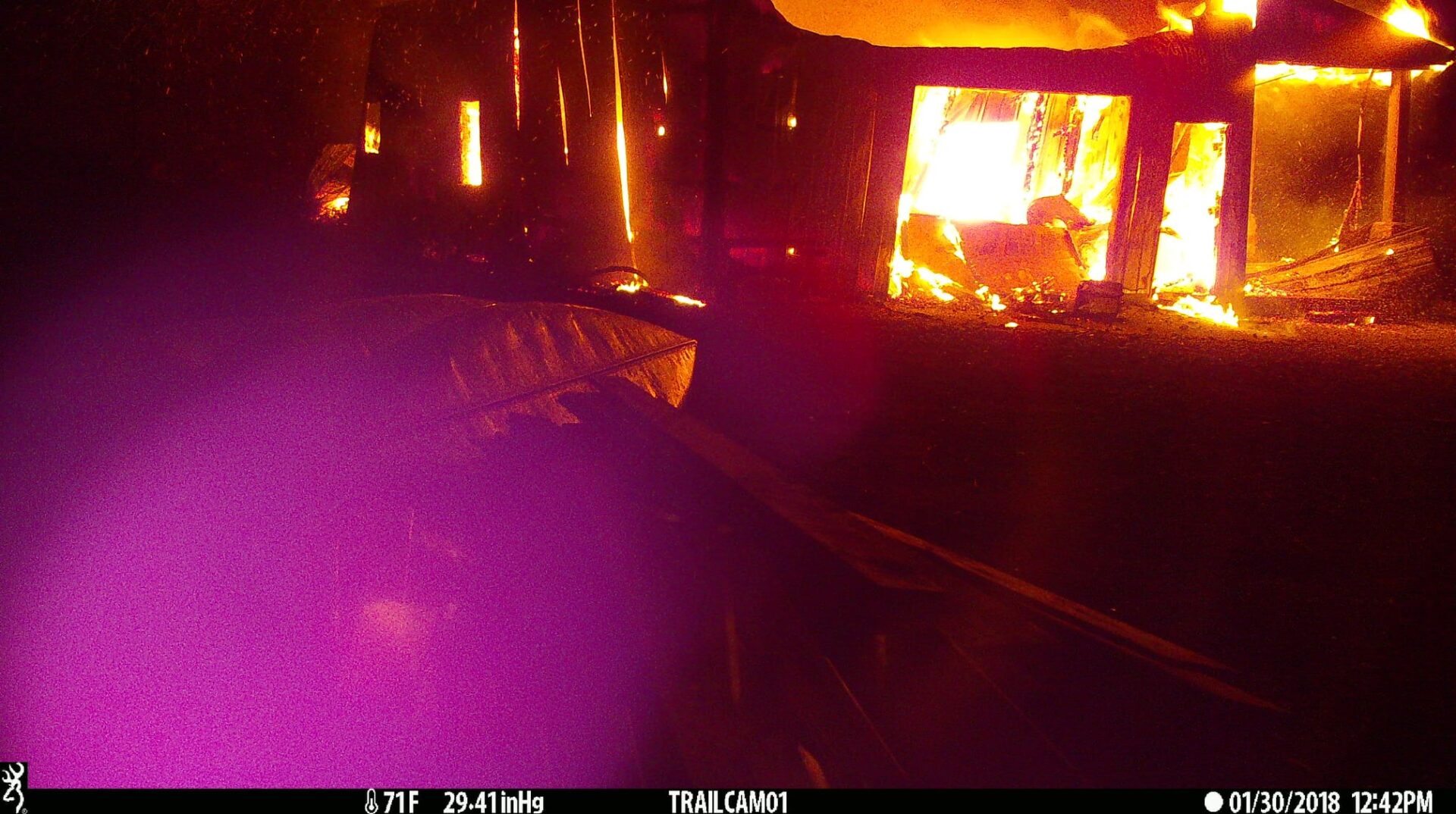 Butler and McLeod detailed the incident of Nov. 17 on Episode 64 of their Driftwood Outdoors Podcast. He’s certain an arsonist torched his cabin in retaliation for reporting the illegal shooting. In an email Jan. 13 to the Springfield News-Leader newspaper, the county’s sheriff, Darrin Brawley, confirmed the fire was set intentionally.

Butler cannot discuss the case’s specifics while it’s being investigated. He said, however, that he feels naïve about buying the property, building the cabin, and investing so much family treasure in it.

“I hate to sound like a martyr, but I should have never thought we would find peace and harmony there,” Butler said in a telephone interview Jan. 14. “The locals are clannish, they live by their own rules, there’s no cell phone service, and you’re 30 minutes from the nearest law-enforcement. The locals hate how the state park attracts people from the outside. They make it a point of pride to intimidate outsiders and protect their backwoods way of life. One person lit the match, but I blame their entire culture. People down there are celebrating what was done to me.”

Butler said he expects his insurance policy and a GoFundMe effort to cover his financial losses, but neither can replace what the fire burned. 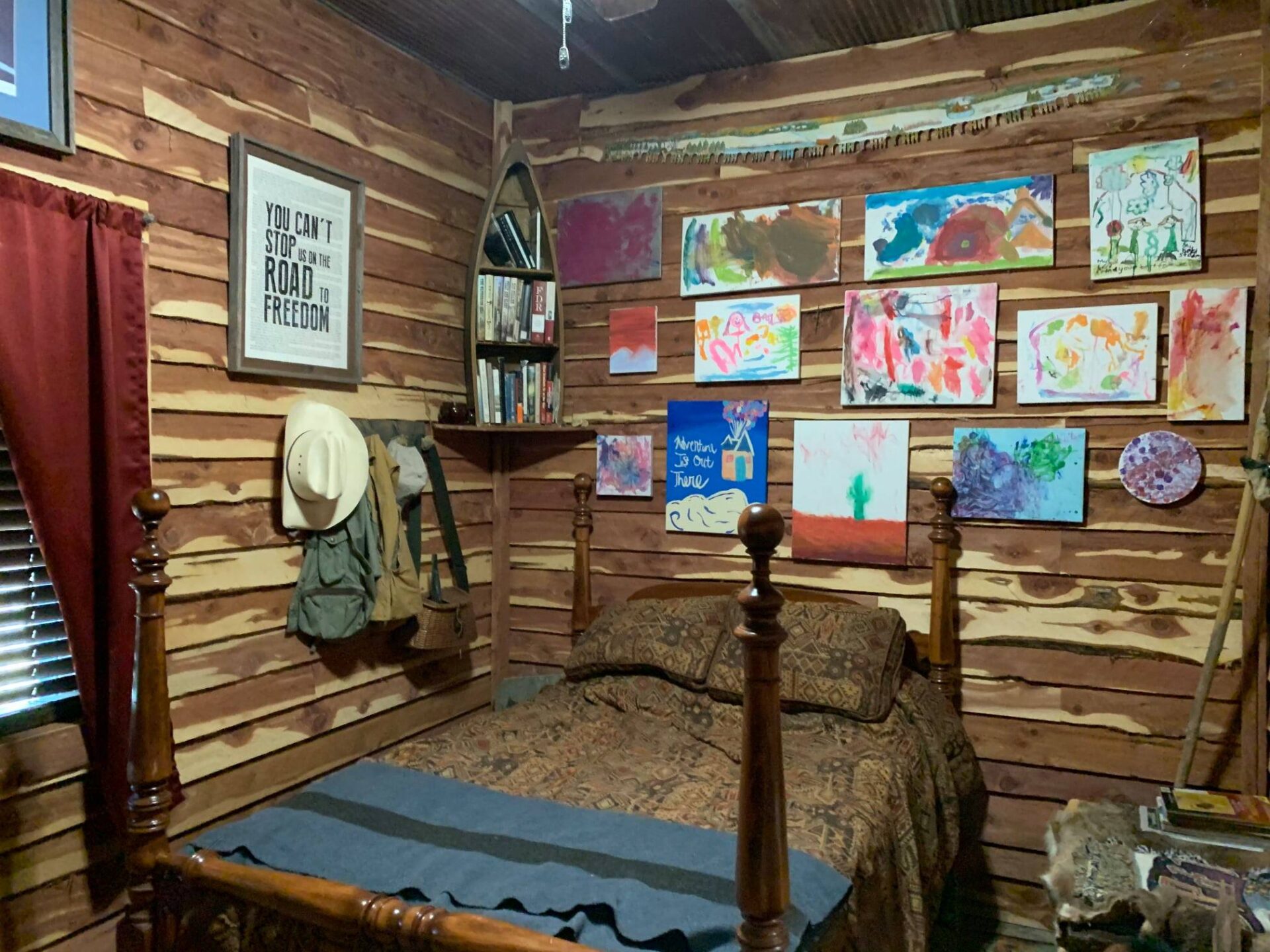 Butler won’t rebuild on the property, but hasn’t decided what to do instead. “I’m considering various ways to start over, but not there,” he said. “I could buy a bigger boat and donate more river trips to get more kids outdoors, or I could buy a camper and explore more places.”

While he considers his options and how much to donate to programs like Missouri’s Operation Game Thief, Butler expresses thanks for support he’s received nationwide.

“I’ve seen firsthand that true evil exists out there, and it’s hard to swallow what happened, but I’m more impressed by the overwhelming care people keep sharing,” he said. “That’s what I’m trying to focus on.”

For more on this story, listen to Episode 256 of the MeatEater Podcast where Butler joins Steve and crew to discuss the poacher, cabin, and fire.

Video of the Day: Mark Drury Manages a New Farm in Missouri

By Mark Kenyon We’ve had Mark Drury as a guest on the 100% Wild Podcast a number of times over the past year, but one of my favorite discussions we had was this summer when we discussed his detailed plan for managing and improving a new property he’d bought in Missouri. Now, lucky for us, the Drury’s have put out a comprehensive video documenting that very process for all of us to see. It’s really interesting to see, in detail, exactly how he...

Sage Grouse: Hunters Have Skin in the Game

You may never swing a shotgun after a sage grouse, the largest North American grouse, but you still have skin in the game in the fight for their future. That is because sage grouse represent something much larger than the upland birds themselves: the public lands and sagebrush steppe habitat critical to Western hunting and wildlife. I first saw sage grouse when I was about 13, sitting in a ground blind waiting for pronghorn to step into bow range...

An enormous Burmese python was captured last week at Big Cypress National Preserve in Florida. The snake measured 17 feet long, weighed 140 pounds and contained 73 developing eggs. It’s the heaviest python ever documented in The Sunshine State, outweighing the previous record by about 40 pounds. The majority of pythons captured in the area range from 6 to 10 feet long. In their native range of Southeast Asia, specimens have measured as big as 2...