In what has been the biggest wildlife management story in the U.S. since the on-again, off-again, on-again delisting of wolves in the three state region surrounding Yellowstone National Park, grizzly bears will remain federally protected under the Endangered Species Act. After almost a month of delays, a federal judge ruled against delisting the bears and allowing proposed grizzly hunts in Wyoming and Idaho. For hunters and wildlife managers, the decision is disappointing, but not entirely unexpected.

When an announcement was made last year by the U.S. Fish and Wildlife Service to turn over management of the Greater Yellowstone Ecosystem distinct population segment of grizzly bears to state fish and game agencies, and in turn allow limited hunting, a legal battle over the matter was all but inevitable. Anti-hunting animal rights groups and some Native American tribes have argued that the current population could not support killing even a small number of grizzlies without endangering the longevity of the species. But both the U.S. Fish and Wildlife Service and state wildlife managers in the Yellowstone region believe grizzly numbers are healthy and fully recovered, and that it’s likely that the bears have reached, and possibly exceeded, total carrying capacity in the recovery area.

By most accounts, that is likely the case. After the population reached a low of 136 animals in 1975, grizzlies were listed as an endangered species. U.S. Fish and Wildlife mandated a recovery goal of 400 bears, which was later raised to 500 bears. That goal was met over a decade ago, and the low end estimate for their current population is now 700 bears, while some experts believe there may be as many as 1000. With hunt quotas strictly limited to one bear in Idaho, and no more than 22 in Wyoming, future grizzly bear populations were never put at risk by the proposed hunts.

While the legal battle was first and foremost related to the agency’s decision to remove federal ESA protections for GYE bears, Wyoming and Idaho’s proposed hunting seasons played a significant role in the decision. Chief District Judge Dana L. Christensen stated that, “… the (U.S. Fish and Wildlife) service’s analysis of the threats faced by the Greater Yellowstone grizzly segment was arbitrary and capricious because it is both illogical and inconsistent with the cautious approach demanded by the E.S.A.” Citing inbreeding due to lack of genetic exchange between different population groups of grizzlies as a threat to the future of the GYE bears, he stated federal wildlife managers “failed to demonstrate that genetic diversity within the Greater Yellowstone Ecosystem, long-recognized as a threat to the Greater Yellowstone grizzly’s continued survival, has become a non-issue.” 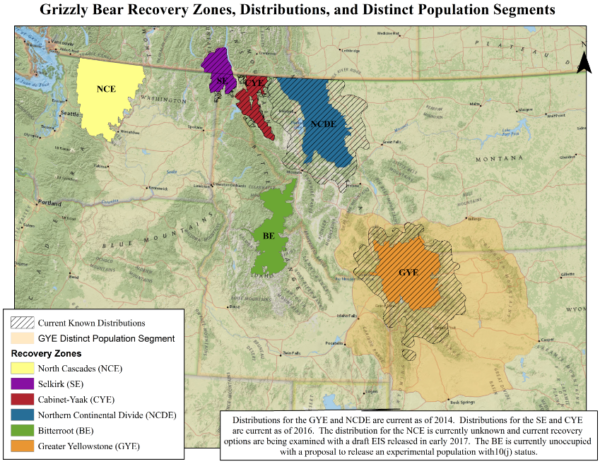 But the judge failed to acknowledge that the Northern Continental Divide population segment just to the north of Yellowstone, which remains federally protected, is also unofficially considered recovered. With over 1000 bears and a population that is growing and both populations expanding their range outside their respective recovery areas, genetic exchange between Northern Continental Divide Grizzlies and GYE grizzlies is more likely with each passing year.  Confirmed occurrences of grizzly bears have been documented between the two areas of occupied range since 2005. 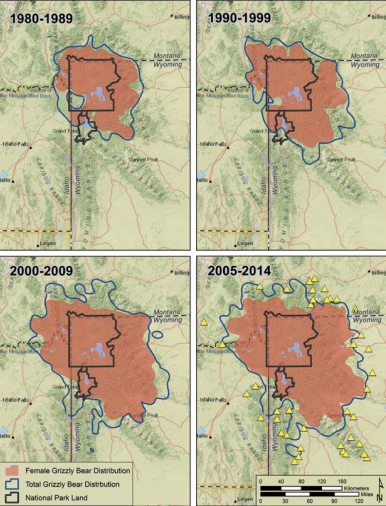 And, the judge’s statement completely ignores over forty years of “careful and cautious” management, protections, and hard work of wildlife managers and biologists, along with the millions of dollars in management costs that led to the bear’s recovery. It’s a sad commentary that undermines the stated goals and effectiveness of the Endangered Species Act. Wyoming’s Governor, Matt Mead, expressed frustration over the decision to ignore the science behind the delisting of the GYE grizzly population, saying, “I am disappointed with today’s decision…Grizzly bear recovery should be viewed as a conservation success story. Due to Wyoming’s investment of approximately $50 million for recovery and management, grizzly bears have exceeded every scientifically established recovery criteria in the region since 2003.”

Despite the decision, one thing is certain. This battle isn’t over yet. In fact, new legislation has already been introduced in Congress to delist the GYE bears in the form of The Grizzly Bear State Management Act.  Just as it took time to win the battle over delisting wolves, it’s going to take time to win the battle over the delisting of grizzlies. The data clearly shows recovery goals have been exceeded, and if the intent of the Endangered Species Act is honored, eventually the management of the GYE grizzly bear population will be turned over to the states of Wyoming, Idaho, and Montana. And while some folks won’t ever see it this way, that is exactly what is best for grizzlies.

The Trump administration announced Monday that it is changing the rules regarding how the Endangered Species Act is applied and enforced. Long-time critics of the act say the new regulations from the Interior Department will reduce the economic burden associated with protecting threatened species, but some sportsmen and conservation groups fear it will weaken the nation’s bedrock conservation law and hinder recovery of diminished wildlife...

Earthjustice cites their slogan “Because the Earth needs a good lawyer” as justification for continuing legal fights to keep grizzly bears on the Endangered Species List. That group and others like it routinely claim to speak for wild places and wild creatures. In contrast, public servants at state and federal agencies often feel ensnared in the environmentalists’ lawsuits. They say those self-proclaimed “good lawyers” too often waste taxpayers...

Federal officials on Wednesday proposed to remove gray wolves from the endangered species list. The decision was revealed by David Bernhardt, the acting secretary of the Department of the Interior, at the North American Wildlife and Natural Resources Conference in Denver. The U.S. Fish and Wildlife Service noted that there has been a significant increase in wolf numbers across much of the country, citing a population jump from 1,000 to 5,000 in...