Deer hunters draw on a lot of wisdom passed down through generations. Often it becomes so widely accepted that it’s almost considered fact, like the idea that deer move more during cold fronts or that rutting bucks taste worse. Another one of those whitetail “facts” that everyone believes is that deer won’t eat yellow soybeans.

This is something I’ve often wondered whether it’s true. While I’ve had some really poor hunts over yellow soybeans, I’ve also had some of my best early season encounters during this time.

When soybeans are in the yellowing phase, the beans are ripening. It’s a transition from green to brown where the plant is going through major changes. While green, the plant has the maximum amount of moisture and the deer will feast on the soft leaves. When brown, the pods have reached full maturity and offer a nutritious seed.

The yellow phase will last about one to two weeks. During that time, the beans can go from 60% moisture to 15% moisture and cause the leaves to wilt and fall off. Usually edges and high spots will be the first to turn, giving fields a green-to-yellow gradient. This can mark an awkward time when the leaves won’t be as appetizing and the beans aren’t quite fully mature. However, I don’t think it’s so unappealing that deer ignore them all together. 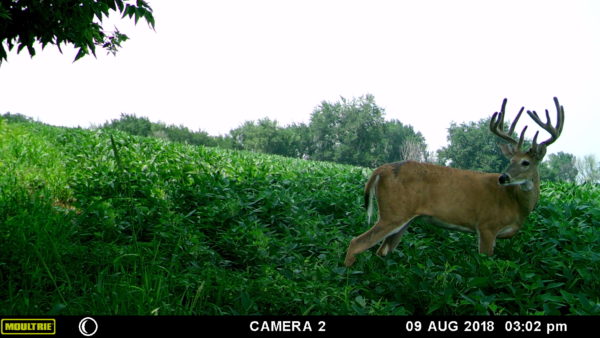 Instead, this is a time that coincides with new food sources becoming available. During this phase, which usually takes place anywhere from early September to early October, you get natural competition from acorns, plums, berries, persimmons, honey locust, mushrooms, and more. There’s also some big ag that deer will favor, like alfalfa, corn, and apple orchards.

Not every fall is the same, though. In years when it’s really dry, there won’t be as much natural browse available. This can throw off timelines and cause the beans to turn while there’s no apples or acorns hitting the ground, forcing the deer to rely on yellowing beans. It’ll be even more amplified if the soybeans are irrigated while the area is going through a drought, keeping the beans in that green window longer.

“If deer populations are high, or if it’s a dry year when natural vegetation is scarce, they will eat any variety right down to the ground in some areas,” said Susan Wallace, former crop physiologist at Clemson University.

It’s not that deer hate yellow soybeans, it’s just that there’s usually more palatable options at the buffet. However, sometimes it’s the only thing at the buffet, giving hunters who like field edges the upper hand.

Agriculture dominates the landscape of America’s heartland. The same can be said of its influence on the deer and deer hunters that live there. The presence of crops that deer eat dramatically impacts where deer live and travel, as do any changes to those crops. Due to an agricultural practice known as “crop rotation,” in which farmers plant fields with different crop types every other year, deer habits change annually in many places. The...

How Do Deer Respond to Floods?

Early last summer, heavy rain caused swollen creeks and rivers to flood prime whitetail country across Iowa, Nebraska, Ohio and Missouri. This spring, it happened again as unseasonal snowfall and biblical rains swallowed up farmland in South Dakota, North Dakota and Illinois. For some hunters, this could be the first time their property has ever felt the rising tide from Midwestern storms. For others, it’s an annual occurrence. I reached out to...

While scouting a new property in college I noticed every single deer on trail cam was covered in vegetation. The wiry, green plants clung to the thin, orange coats of whitetails and camouflaged them better than any hunting gear could. I had no idea what the foliage was or where it came from. My question was answered 20 steps later when I ignorantly walked into a whole patch of the stuff. The burrs dug into my jeans, t-shirt, and backpack, and...