The Injuries and Illnesses that Trigger Amazing Antlers

As Demi Lovato sings, “Nothing is more beautiful than the smile that struggled through tears.” Admirable antler traits are subjective, of course, and vary by admirer. Still, most hunters find charm in the bowls, furrows, sharp angles, palmations, flat edges, and acorn tips of unusual antlers.

Many amazing antler traits start from broken bones, ruined nerves, or shredded muscles. And no matter their size or source, all antler abnormalities draw scrutiny. Did that narrow hollow in the main beam start with the jab from a sharp stick or a wood tick lodged in antler velvet? Maybe that stick pierced a major blood vessel and caused an infection that prevented antler tissues from mineralizing.

Whatever the cause or assumption, most deer biologists hesitate to circle A, B, or C as the answer.

“The jury is still out on what forms those little cups and bowls in antlers,” said Brian Murphy, staff biologist for HuntStand and former CEO of the Quality Deer Management Association. “You hear them explained by ticks or wounds from biting insects, but I don’t know if that’s ever been documented. The novelty of science is that some things can’t be explained with certainty.”

Four Common Origins Four common sources of injury-related oddities involve the pedicle, or the “source” of regenerating antlers; frontal bone, or the skull material around the pedicle; antler tips, which are soft and vulnerable while growing; and a severed, broken, or crippled hind leg, which can cause “contralateral asymmetry,” an odd antler growth on the opposite side.

As the antler’s source of growth, pedicles can change an antler’s size, shape, and symmetry when injured. Depending on the injury’s severity and damage to the surrounding skull, it can cause extra antlers to grow. Further, as bucks grow older, larger, and more combative, they’re more likely to injure the pedicle or skull. In some cases, those injuries trigger infections that become abscesses, which eat into the brain and cause death.

A 2009 Maryland study found brain abscesses in 35% of adult bucks. This disease can afflict does but adult bucks make up 80% of documented cases. It doesn’t seem to affect deer populations. In the Southeastern U.S., the syndrome causes less than 10% of naturally occurring deaths in adult bucks.

Infections and illnesses can also cause high fevers that disrupt antler growth. In fact, the ravages of epizootic hemorrhagic disease, which is spread through biting midges (gnats), can affect a buck’s testes, reduce testosterone production, and disrupt its flow to growing antlers. The antlers might cease growing but the velvet never sheds, causing a condition called a “cactus buck.”

High fevers can also halt antler growth, causing the tips to abruptly stop or flatten out.

“A similar thing can happen to your toenails and fingernails when you’re sick,” said Steve Demarais, a professor at Mississippi State University’s Forest and Wildlife Research Center. “Sustained fevers can halt nail and hair growth. Sometime later you might notice lines across your toenails from that disruption.” 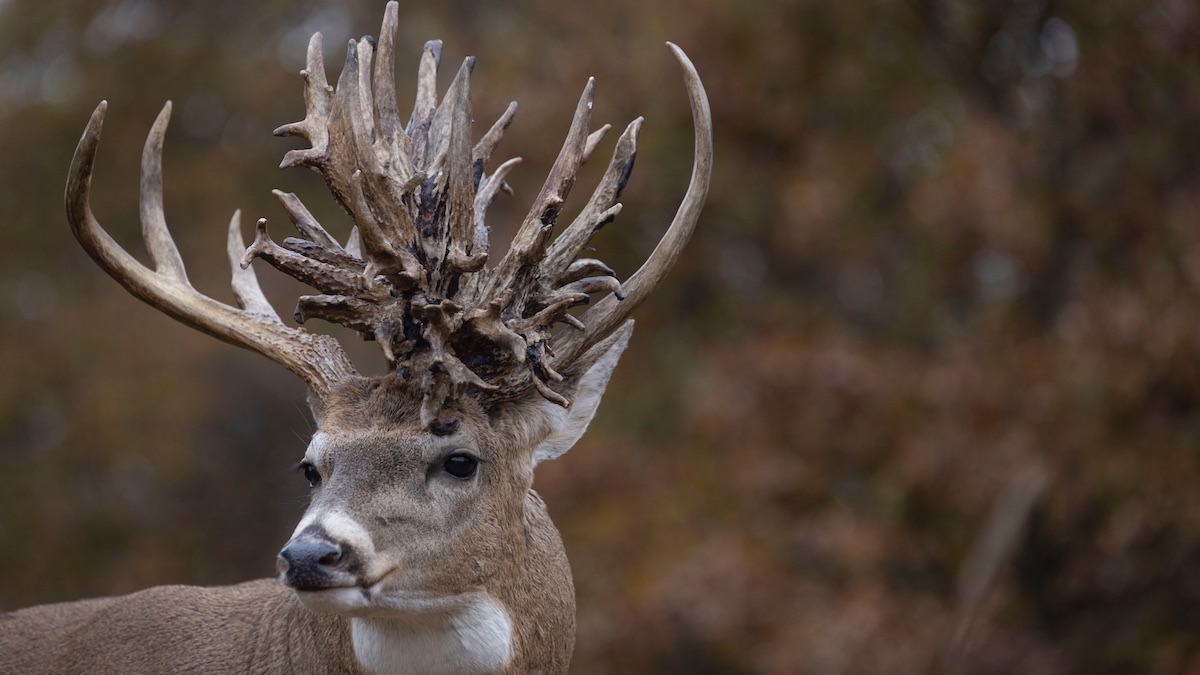 This is the Butcher Buck, the second biggest archery buck in the world.

A Unique Process Complicating the search for answers is that deer, elk, moose, and caribou are the only animals that grow antlers. Nothing else can grow bone in spring and summer and cast it aside in late fall and winter.

“They confirmed that antler growth is a kind of controlled form of bone cancer,” Murphy said. “It’s the only form of cancer currently known that can turn on to grow and turn off when complete. Deer are also the only animal that can go through osteoporosis during antler growth, correct itself afterward, and go through it all again annually.”

Murphy said deer can’t generate antlers through nutritional foods alone. “They rob much of the nutrients they need for antler growth from their skeletal system,” he said. “Diet alone isn’t enough. That means going through osteoporosis and then self-correcting when the antlers finish growing. As far as we know, they’re the only animal that can do that. Osteoporosis is a one-way process for humans. Once it starts, it stays.”

Murphy said another unique aspect of antler growth is the “abscission layer” between the buck’s pedicles and the antler’s bases.

Speaking of mysteries, don’t overlook antler velvet, which some consider a growth hormone with insulin-like qualities. “There’s a lot going on up there, and there’s still far more theory than established fact,” Murphy said. “Antler velvet is the only living tissue known to science that heals every time without a scar. That’s why trauma researchers are studying its possible use for treating burn victims.”

What About Genetics? Given those complications, it’s no wonder many hunters simply attribute unusual antler traits to “genetics,” even though gene heritability is equally difficult to understand and predict.

“Genetics explain a lot of things, but you can’t rule out how heritable genes are affected by diet, injuries, the mate, habitat conditions, and other environmental factors,” Demarais said. “We had a big buck down here with double drop times that lived to age 10. Its left drop tine started growing at a younger age and got much bigger than the right one. Why? We’ll never know.

“Maybe the cells on the left antler’s pedicle better expressed all those complex genetics. Or maybe it’s something in the DNA and the messenger RNA, which translates into building proteins at the cellular level," Demarais continued. "With all the complexities at work, maybe we should just enjoy antlers for what they are, and be content with that.”

The 3 Most Important Factors for Antler Growth

Karl Miller doesn’t hesitate when asked to list the five key factors of antler growth in white-tailed deer. “Nutrition, nutrition, nutrition, nutrition; and then age and genetics, but you can’t do anything about genetics,” said Miller, professor emeritus at the University of Georgia’s Warnell School of Forestry and Natural Resources. “Good health—physically and socially—also matters, but that’s a big function of nutrition. Healthy bucks best...

What the CWD Bill Means for Deer and Deer Hunters

Whitetail deer are the most hunted big game animal in the U.S. Hands down, more people hunt deer than anything else, with more than eight out of 10 licensed hunters nationwide attempting to fill whitetail tags each fall. However, chronic wasting disease (CWD) is spreading like wildfire through deer herds, also threatening elk and moose populations across the nation, and the hunters who depend on them. CWD is a fatal neurological disease which...

4 Most Endangered Whitetail Destinations in America

It would not be hyperbole to say that we’re quite possibly living in the “golden age” of whitetail deer hunting. Deer populations might be higher now than ever before and, at least since records have been kept, bigger, older bucks have never been more numerous. Hunters smash world and state records every year. The good times sure seem to be rolling. But this isn’t true across all aspects or locales within the whitetail range, nor is it guaranteed...